Italian pro team Liquigas have had a semi-permanent base on the slopes of Mount Etna this year. Etna is an active volcano in Sicily, the large island at the southern tip of the Italian peninsula. It’s black slopes often contrast with a snowy peak and at times, the infernal glow of lava.

Liquigas’s mountain HQ is the Rifugio Giovanni Sapienza, a mountain lodge also the choice of the Astana team. A pumice stone’s throw away lies the Hotel Corsaro, as used by two more teams, Lampre and Katusha.

The volcanic slopes mean no brutal moments, it’s a smooth climb uphill with sections at a steady 7% but what the ascent lacks in gradient, it makes up with length being 19km from Nicolosi, with some climbing needed to get to this last town before you enter the Etna national park. With warm Sicilian sunshine and reasonable gradients it sounds like the ideal place. But it’s not without its dangers.

Hot destination
Recently the team’s Polish rider Sylwester Szmyd told how a new eruption caused concern. “Etna decided to give us a little excitement over the weekend… there were explosions and the roads were covered in ash. The lava isn’t visible from the hotel, but yesterday morning hotel staff and the police went up to investigate and one of them, unfortunately, came back with melted shoes“.

This is common, the volcano dominates the landscape and the local life too. Etna is one of the most active volcanoes in the world, a veritable cauldron. Eruptions are constant although big lava flows aren’t every day. But whole villages have been lost in recent times and it’s normal for locals to sweep and wash the abrasive black dust away many times a year.

Nibali prepares for the Giro

Altitude training?
Why stay on the slopes of an active volcano? Well Sicily has warm weather and the base is at 1,910 metres above sea level and it seems riders want benefits of training at altitude. High but probably not enough to get any significant benefits from altitude training.

To recap, the partial pressure of air reduces the higher you go, meaning the body is deprived of oxygen, a condition known as hypoxia. In response the body produces more red blood cells, thus improving the oxygen carrying capacity. When back at sea level the athlete gets a performance improvement.

Only the jury is out. Some say it works, some say it doesn’t. Many pros are certainly heading for high altitude. But reports suggest it might depend on genetics, that some riders respond whilst others don’t. Other research suggests there are costs and benefits, that for the blood boosting effect the blood chemistry changes for the worse, for example the pH. But a common idea is that you need to be high above sea level, preferably above 2,500m. So being at 1,910m probably isn’t enough, it might help at the margin but not substantially.

But I suspect none of this will be news to the teams. They will be testing riders to measure their responses. Perhaps riders are using altitude tents, secretly popular in the peloton, to further extend rarified air?

Giro d’Italia
The Giro has a stage with two climbs of Etna, first tackling the slopes on the north-eastern side via Sant’Alfio before descending back to the coast and then taking the road from the south to climb to the Rifugio Sapienza. These are long and regular climbs which should suit the more powerful rider who can push a big gear over the pure mountain specialists. 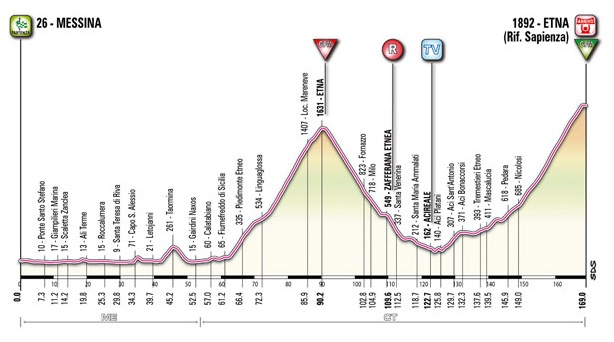 Summary
Liquigas, Katusha, Astana and Lampre are all using Etna for altitude training camps. It must be crowded at times. There’s not much up there except for the Sapienza lodge, the Hotel Corsaro and a car park for a cable car that lets visitors get higher up.

Only you wonder why because at 1900m it’s just not high enough to gain any of the hypoxic benefits from altitude. It’s remote so teams are not bothered by outsiders knocking on their door.

For the riders it must be boring, they can hardly go for a stroll, sit in a café and watch the world go by. For all the colour and glamour in pro cycling, a stint at altitude must rank as the most boring part of the job. Still, many will know every bend in the road for the Etna stage of the Giro.