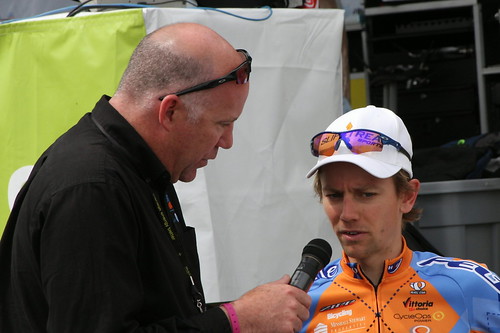 Trent, can you explain your predicament in less than 100 words?

The spat between Trent Lowe apparently hasn’t exhausted every legal avenue but it’s certainly blow up into a public relations war with each side trading blows via quotes, statements and press releases.

The detailed chronology prepared by Lowe’s lawyers, the lengthy interview with NY Velocity and now a similar detailed chat with Cyclingtips go some way to putting facts and opinions into the public domain from Lowe’s side. Now I love detail, after all most of my posts on here are probably too long. But if I’m fascinated by all of this, I’m still confused.

I think he needs to put out a simple message. Without trying to taking sides, I thought I’d try and put Lowe’s message into three take-away bullet points. Apparently it was never a case of “pay us €500,000 or we embarrass you over the dodgy doctor“. Or at least that’s his claim and we’ll have to see if the Slipstream side has any response.

Finally, if you’re wondering whether any of this matters at all, it does. Any employee-employer dispute needs to be resolved properly but this one involves a high profile team, a suspicious doctor and more. It’s these important factors that cloud what is actually a simple dispute over seemingly unpaid wages.