A bookend to the Eurofoods series where I want to look at a few small things rather than one single product.

Produits Diététiques
There’s no exact translation for these products, they’re part diet-food, part health-food and you’ll often find a whole row in a supermarket dedicated to these products. There’s everything from rice biscuits to wholemeal pasta to vitamins and teas that apparently help lose weight. Only pharmacies in France can sell medicine like paracetamol so everything in the supermarket is benign, it’s food and certainly not medicine. But these are popular with cyclists, sprinkling flakes of yeast on salad is common for example.

No food
For all the talk of food, the unmentioned thing is that cyclists have to be skinny. I once met a coach who told me to lift up my shirt. I looked perplexed and he explained he wanted to see if I was carrying any bodyfat as there was no point coaching people who weren’t slim. You might see images of the pros but in real life they all look smaller, some are even quite frail looking.

Whilst many Europeans enjoy their food and are surrounded by tonnes of fine produce, many a cyclist deprives themselves. Cheese, wine and chocolate can be “unprofessional” and like kids some riders will eat these out of sight of their team manager whilst some will simply avoid these things. Sean Kelly once said he’d eat chips a couple of times in the winter but it was off limits in the season. Far from cycling being an excuse to eat that cake or a whole packet of chips, often the rider does an epic training ride and then stays in a haze because he has to lose weight ahead of an upcoming target.

Indeed there’s sometimes talk of eating disorders. It’s quite possible given the pressure to be lean but whether the percentage of cyclists succumbing to this is bigger than the wider population just isn’t known.

Empiricism and tradition
For all the talk of sports science there’s still a strong habit of “this worked for me 20 years ago, it’ll work for you” from many team staff. There are all sorts of tricks, habits and frankly weird recipes. 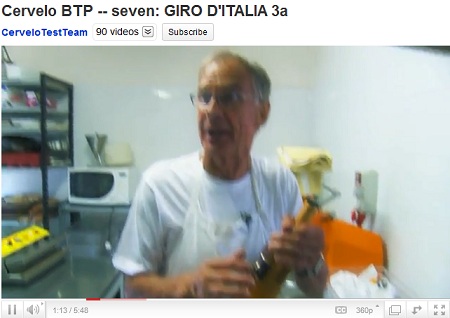 Viewers of Beyond The Peleton will have spotted Carlos Sastre has a drink made from two eggs, sweet white wine and honey in the mornings. The late Frank Vandenbroucke used to eat pots of baby food, rationalising that it was purer.

The taste of home
Other riders find travelling on the road hard, that being in Belgium for weeks at a time doesn’t satisfy the taste buds. Many an Italian heading north for the spring classics will include packets of coffee or home produce in their suitcases. I once rode a hotel lift with two Italian riders when one opened a rucksack to bring out a packet of Lavazza Oro, it was treated as if it was a religious artefact. Whole Italian teams pack olive oil in the support truck, even if Belgium has a substantial expat community of Italians and home produce isn’t hard to find. The same is true for many riders who take some produce from home as a comfort on the road.