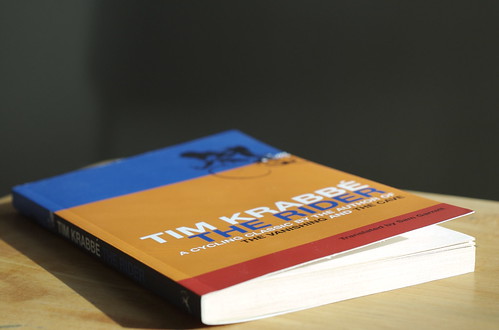 Tim Krabbé’s novel De Renner is a classic of cycling literature. Known as “The Rider” in English, this is semi-autobiographical account of a race in the Lozère and Mont Aigoual. A first person account, it takes you into Krabbé’s mind as he battles to win the tough race. At times there’s action but like any bike race there also moments when strange thoughts come into your head and Krabbé details the way his mind wanders along the parcours.

It’s impossible to find a bad review of this book. Over at Cyclingtips, Wade writes “just like knowing the basic skill of how to fix a puncture, this should be mandatory reading for every cyclist” and I’m minded to agree. If you’re reading The Inner Ring, chances are that you’ll like The Rider. There’s a mix of history, anecdote, observation and bike race action that combine to make it readable again and again.

From my personal perspective is that the book is incredibly real. Observations on rural France from the roadside are precise and still valid today. If I pick up the book, I’m suddenly back in a race and there’s a touch of adrenalin with each turn of the page. You feel like you want to sit down and read this with a water bottle nearby.

The only possible criticism is that Krabbé’s thoughts are too polished in a bike race. Yes my mind might wander but to more practical things like whether I’ve got enough food at home as opposed to reflections on Hennie Kuiper or Mont Ventoux. But that’s why the book is good, it is escapism in every sense.

Dutch and English, and now Spanish
Originally written in Dutch, there English translation in English by Sam Garrett is first-rate. I’m told there’s a Spanish version available now too. A friend is learning English and I gave him a copy of the book. He loved it, more so since Krabbé’s prose is so simple and clear. It’s almost worth learning English just to read the book. I’ve spoken to Krabbé to ask about a French version of the book but, dommage, there are no plans. A real shame since the book would find a ready market in France and beyond.

Indeed the book has a cult-like following with Dutch fans revisiting the real-life location of the race, taking in the great local roads and recreating scenes from the race. Krabbé has himself accompanied people on a cycle tour to give them a local flavour. Similarly the book has been an inspiration to Simon Mottram, founder of British cycle clothing label Rapha, whose brand inspired by the idea of “glory through suffering” and the About page on the Rapha website quotes directly from The Rider.

As seen on screen
Krabbé isn’t just famous for this book. He’s written several and one novel was turned into a film, The Vanishing. Originally made in 1988, the film features cycling in the backdrop as many scenes take place with radio or TV coverage of the Tour de France as a background sound. It’s a creepy and sinister tale of kidnap and murder made worse by the fact that the viewer knows what is going to happen in the film. The Vanishing was remade by Hollywood in 1993 but everyone’s said it’s not a good film. The original is worth watching. But The Rider can’t be made into a film, it works purely as a literary device. It could make a very good audio book given the right person to read it.

Previous post: A call for teams to be punished for doping scandals