Cartoons from the weekend 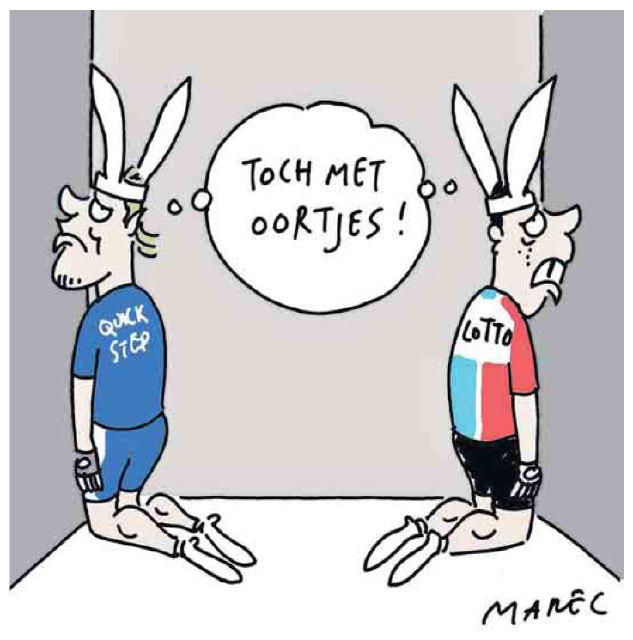 The sketch is by Marec, resident cartoonist of Het Nieuwsblad who normally does politics. But the weekend racing is front page news in Belgium. The scene depicts Tom Boonen and Philippe Gilbert as Belgian dunces who lost out and both are thinking “we’ve got ears after all”.

Like most jokes, when you have to explain them the funny side vanishes. Oortjes is Dutch for ears and also earpieces, the race radios. The two have donkey ears, a reference is also to Kuurne, home of Sunday’s race where the locals are strangely known as donkeys. A donkey is a regular feature of the podium every year. Welcome to Belgium. 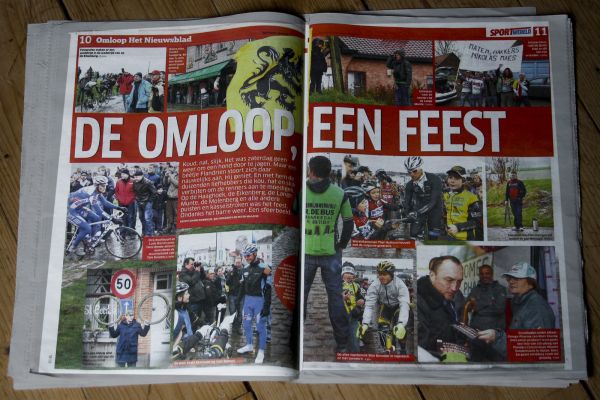 Cycling isn’t just making the front page cartoon. It’s fulling almost every page. One Belgian reader kindly emailed full details of how a single newspaper had 20 pages of post-race analysis – including the spread above – covering everything from marauding Dutchmen to the women’s race. I’d said that English-language coverage is very good but of course nothing compares to the Belgian media in March and April. 20 pages!

Still, sometimes you don’t need cartoons to make people laugh. The image below is from twitter and yes, that’s Mark Cavendish.

Still, I think Cavendish had the last laugh this weekend. Playing family guy is fine by me. Whilst Cav was playing Pistolero with his girlfriend’s son, it was André Greipel who misfired after apparently touching wheels with team mate Marcel Sieberg, forcing him to slow momentarily and this cost him a result in Kuurne.