The image below is a cropped screenshot from cyclingnews.com this evening. I’ve annotated it to show where the stories come from. You can click on it to enlarge the image. 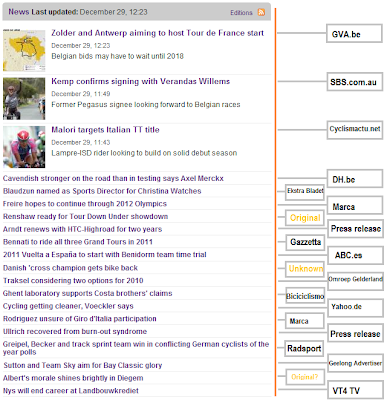 In summary of the 20 headlined stories, only one – a chat with Mark Renshaw – is certainly original to cyclingnews.com and perhaps a second and third are, on Joachim Parbo and Niels Albert respectively, although I am not sure.

There’s nothing wrong with this, indeed cyclingnews is particularly useful as a point of aggregation, putting stories from obscure websites, regional newspapers and other sources all into one place, and above all doing it in English. In business talk this is a “value added service”, in plain English it’s very convenient.

“Right now, there’s at least ten cycling sites who all publish very similar news, which, surprise surprise, often comes from very similar (read: THE SAME) sources. Depending on their professionalism and editorial policy, some will attribute their sources and others will not”

…and in case anyone thinks I’m singling out cyclingnews.com, it’s worth adding that cyclingnews.com is one of the best sites for attributing sources and tends to cover more stories about pro cycling than any other. It’s more I don’t want to name the worst examples.

Things go round in circle, the media snake eats its tale. Take the story on Judith Arndt’s contract prolongation with HTC-Highroad, it first appeared online with German newspaper Die Zeit after an initial press release from her team. Later cyclingnews.com cover the item. Then in turn French website cyclismactu.net covers the story, citing cyclingnews.com as the source, which is fine. But was cyclingnews.com the original source for the news or was it just relayed from the press release?

The point of what I’m saying?
It’s just an observation that news in the cycling world is hard to come by and as Anthony Tan says, it tends to go round and round. I’m always hungry for original content as opposed to press releases and recycled news, when you read something on X.com only to rediscover it on Y.net later.

Right now I am enjoying Velonation  which has its fair share of recycled Euro news but plenty of original news and scoops. Cyclingnews.com is still the home page for my browser.