This is something raised during the RTL-L’Equipe cycling podcast but since the show is in French, I thought it might be interesting bringing it to an English-speaking audience.

A rare photo of Pepe Martí at work

Vélo Magazine’s Nicolas Perthuis is an authority on training methods and sports science, to the point of annoying some French riders because he’s not slow to expose their old-school training methods, adding that they could improve their results if only they upped their game.

With this in mind Perthuis has been trying to find out how Alberto Contador trains. Perthuis says that Contador tends to ride the Dauphiné below peak fitness, something many observe. But when the Spaniard arrives at the Tour, his numbers are up by some 10%. This is a massive improvement, especially if it’s achieved in a three week out-of-competition window. By contrast the likes of Armstrong tended to improve by less than 5%.

But Perthuis requests “hit a wall”. An earlier promise of transparency from Astana’s new manager Yvon Sanquer only saw Perthuis blocked from contacting Contador’s coach, Pepe Martí. It was agreed that Perthuis could email Martí six questions. After sending six pertinent questions the journalist eventually got a reply that the coach was too busy to reply. 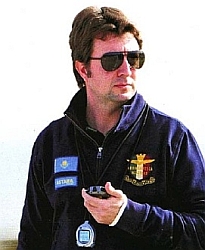 Top Secret
Now asking for interviews and getting rejected is part of a journo’s life. I can understand why Contador and his entourage want to keep the training plans secret, it’s potentially valuable information for rivals. But at the same time, a rider can only ride his bike. It comes down to kilometres ridden, intensities, intervals and wattages.

The explanation behind the big performance gains could be that Contador responds very well to certain types of training or that until a particular point in the season he had been avoiding some types of session, for example not working too much on his threshold, or his infamous mountain attacks. Maybe Contador loses weight as well. Or it could be that Perthuis has his numbers wrong and that Contador’s gains aren’t as significant as the journalist thinks. Either way some explanation and engagement would be fascinating.

What’s to hide?
The subtext of Perthuis’s frustration is that in an era when people are sceptical of cyclists, hiding the training plans is not a great media move. It only invites suspicion, big gains can happen because of doping.

I’m wary of writing this but thought it’s worth making because we know very little about Contador, his entourage and his training methods. For the greatest rider in the world, he’s surprisingly elusive.

I’m certainly interested to know more. Does he spend time at altitude? Does he use an altitude tent? Is there a particular diet, any weight loss? How much time does he spend training on his TT bike?

By contrast even Lance Armstrong’s training regime was documented in much greater detail, journalists would be invited to attend mountain stage reconnaissance and Chris Carmichael was on hand to answer questions (yes, I know who was really coaching…). Today Aldo Sassi will explain the regimes of his riders and the same is true for several other riders, for example Wiggins will detail his weight. Not every detail is given away but it’s not a taboo subject either.