OK, this is straying away from the usual cycling territory but I’m fascinated by the ejection of the English team from the soccer World Cup. I also wrote about France’s elimination too.

Some of the team said they were “tired” and commentators said that the players looked languid. Apparently some blame a lack of a winter break during the season, meaning the players find themselves fatigued by July. A follower on Twitter linked to a decent article analysing the failure. But it asked the following question:

How could the vibrant Rooney, the player of breathtaking boldness and the most beautifully marshalled skill, turn into the leaden figure which contributed so little in a group of mediocrity, and then virtually disappeared when the challenge was against a German team full of life and movement and, in the end, an exultant self-belief?

…only the article didn’t notice the photograph used to illustrate the piece. As they say, the camera never lies: 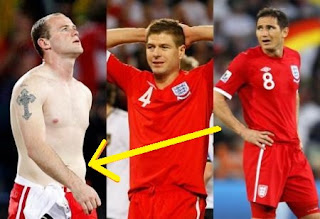 I’ve added an annotation to the photo in case you can’t see what’s wrong. Yes, this is a player at the World Cup with what looks like a beer belly.

Now football is a sport where skill is the prime ingredient but surely fitness matters? In a game where the ability to run, to accelerate, to stop, and to change direction translates into passes and goals, I don’t need to point out that carrying kilos of lard is not optimal. It leaves me amazed to think you’d even pick a player who is this out of shape. And that the same player would board the flight for South Africa knowingly in such bad condition.

Now with a cycling background, I might be going too far. Cyclists go to extremes to lose fat and their monastic life is unnecessarily harsh for other sportsmen. If some riders don’t touch alcohol for months before a target race, a beer isn’t going to harm a footballer.

But if you want to know why some players struggle to run around the pitch, such an obvious sign of a lack of condition is surely part of the answer?

I fear a winter break for the English Premiership would only be a chance for some players to gorge themselves on stodgy Christmas dinners.