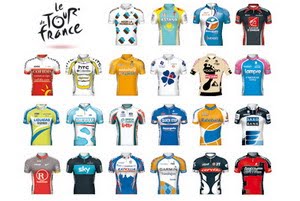 So we know the teams who have been picked for the Tour. But why did Prudhomme take BMC? Well for ASO’s Race Director it was a “logical” choice. In an interview with L’Equipe (in French) he explains things. I’ll translate…

Was the last spot between Cadel Evans’s team and the others?
“As soon as Cadel Evans signed for BMC, this raised the bar for the other other teams. Evans has twice finished second in the Tour and he is world champion. It’s been a long time since a reigning world champion was able to aim for the podium. It was complicated to ignore him and his team, sporting logic brought us to this result. The first part of the season didn’t change our impression, even if we saw some nice riding. A team like Saur-Sojasun, for example, showed a good level but not enough to make us overlook the world champion. The choice was logical.”

Four American teams, one British. Is this a swing towards an English-speaking Tour de France?
“The Tour remains the Tour de France. It’s the biggest race in the world. There’s no denial of the past. It’s becoming more international, that’s normal. In football the best French players often play abroad in the biggest foreign clubs. It’s more the absence of French champions that you notice.”

As a result, there will be fewer French riders. Did you fix a minimum number?
“30-35, that’s good for me. This year we’ll be around 30. You have to understand that we can’t take as many teams as the past, we can’t go beyond 200 riders for safety reasons and that’s a good thing. But in the off-season we’ve had some transfers worthy of the football transfer market. Armstrong to RadioShack, Evans to BMC, it creates a richer sport but some will feel disappointed.”

My thoughts
Evans is worth his weight in gold to the BMC team, he’s their entry ticket into the race. I’m in agreement with Prudhomme, he’s picked the strongest teams. Perhaps Saur-Sojasun or Vacansoleil might have livened up the race but if Evans can tweak his plans to include the Tour as well as the Giro then this should bring more depth to the battles in July. Evans is a genuine candidate for the win. Yes he can’t match Contador’s accelerations but he can put enough power down to worry the others. Team Sky get a ride, that’s obvious, but they won’t welcome Evans.

Saur-Sojasun, Vacansoleil and others just didn’t deliver. There have been plenty of ASO races to impress Prudhomme, from Qatar and Oman to Paris-Nice and the Critérium International. Sergey Lagutin’s last gasp attack on Col de l’Ospedale is symbolic of this, he got a gap but didn’t last long: ASO want results and fireworks, not desperate attacks.

Longer term ASO needs to set out its selection criteria so that the process is reasonably transparent and obvious. I’ve nothing against fixing things like a quota of French teams or saying non to teams like Lampre that turn up in July but have their heart set on the Giro.

The graphic above is from the excellent Italian Cycling Journal. Grazie