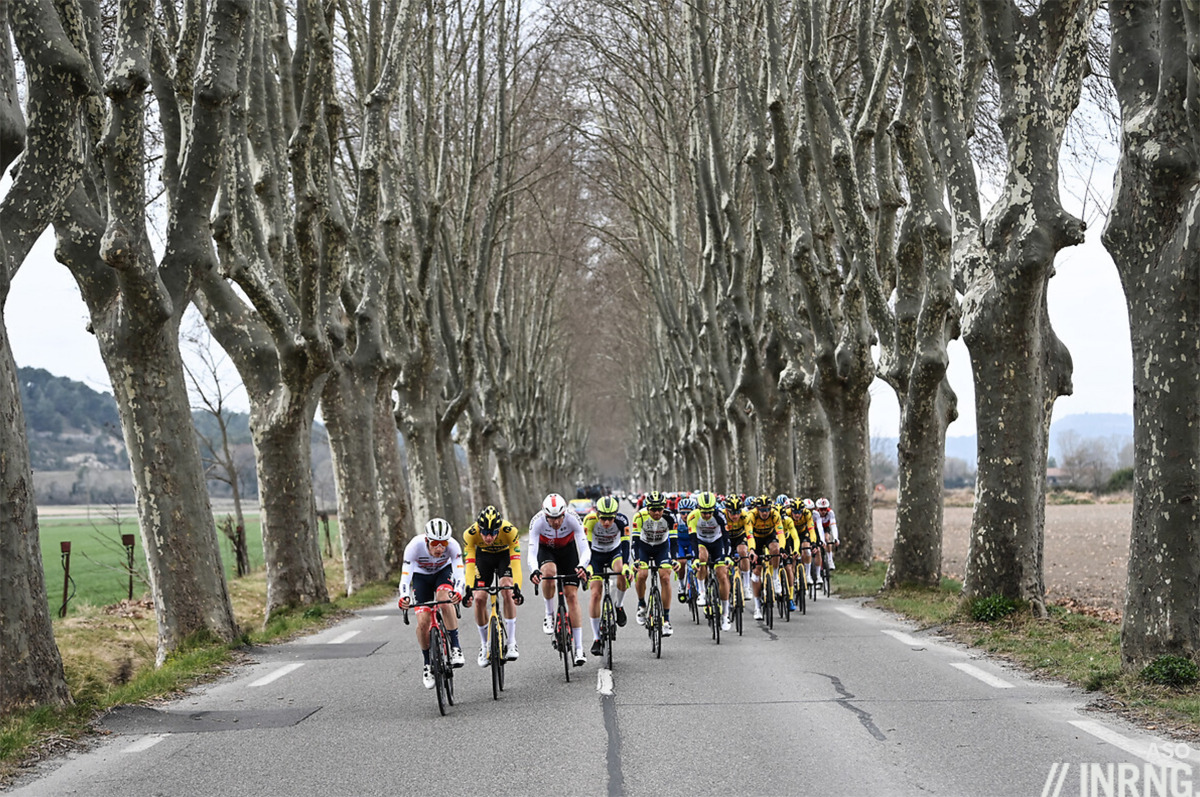 The route for the 2023 Paris-Nice is out and here’s a more detailed stage-by-stage look at the route ahead between Sunday 5 – Sunday 12 March.

The novelty is the team time trial, back after a 30 year absence and with an innovative new rule change as well. 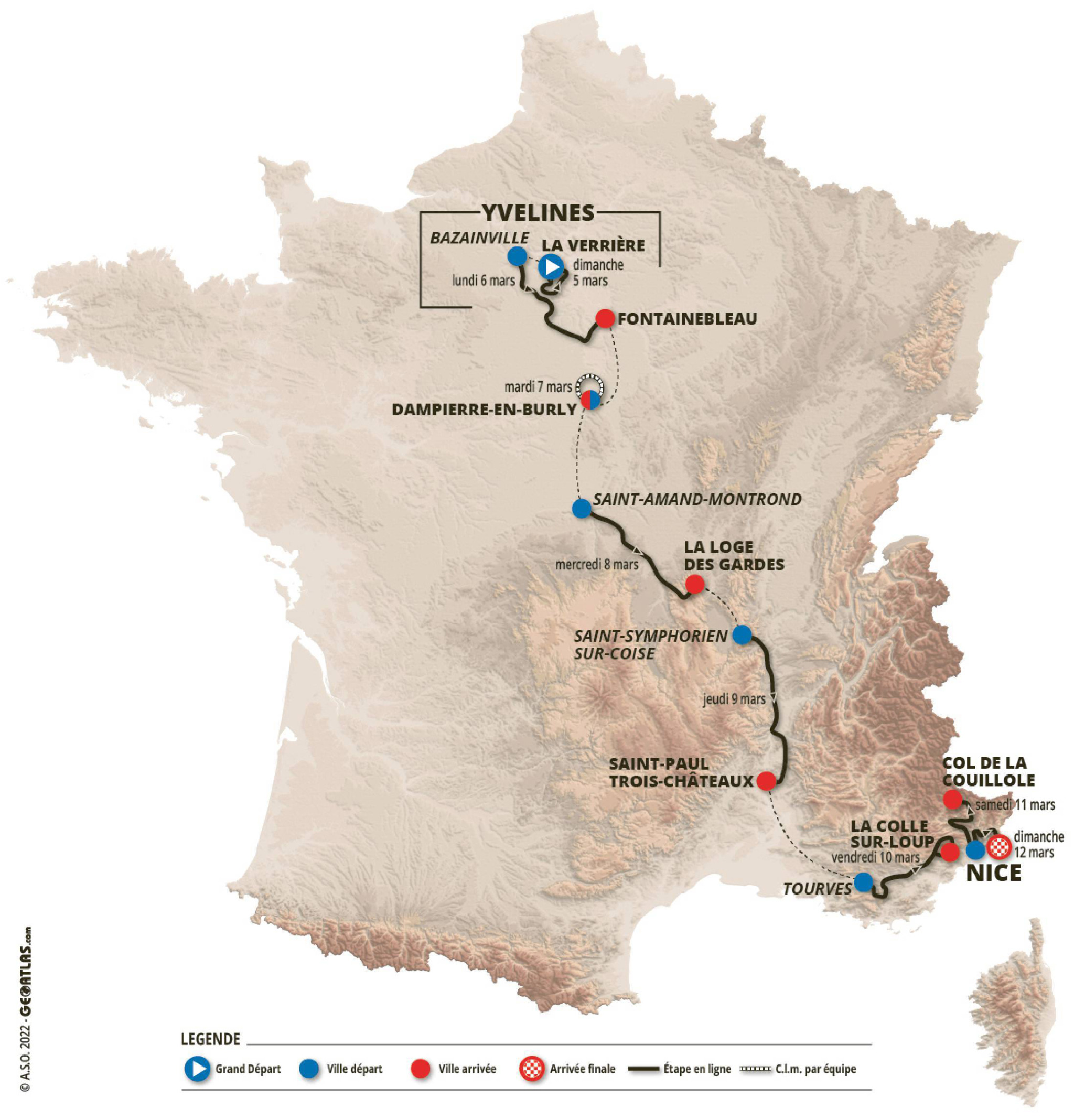 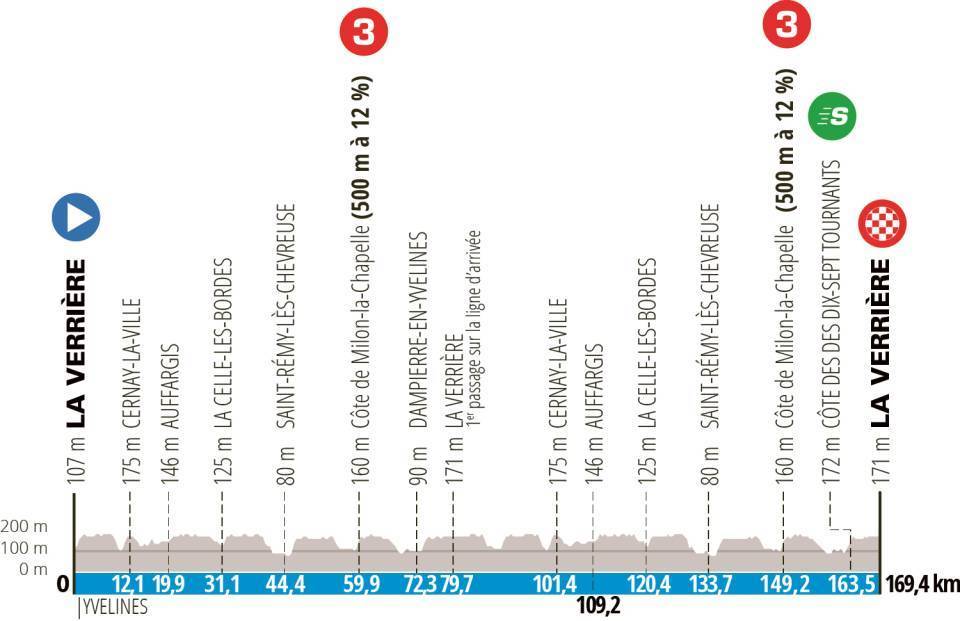 The traditional opening stage in the Yvelines department to the west of Paris, race organisers ASO have a long-term contract to start the race here. There are familiar roads in the Chevreuse valley including the Côte des 17 Tournants – climb of the 17 bends – but hardly Alpe d’Huez’s Parisian cousin, the 17 bends are more slight kinks in the road but it’s still a climb where being at the front is advantageous before the finish in La Verrière. 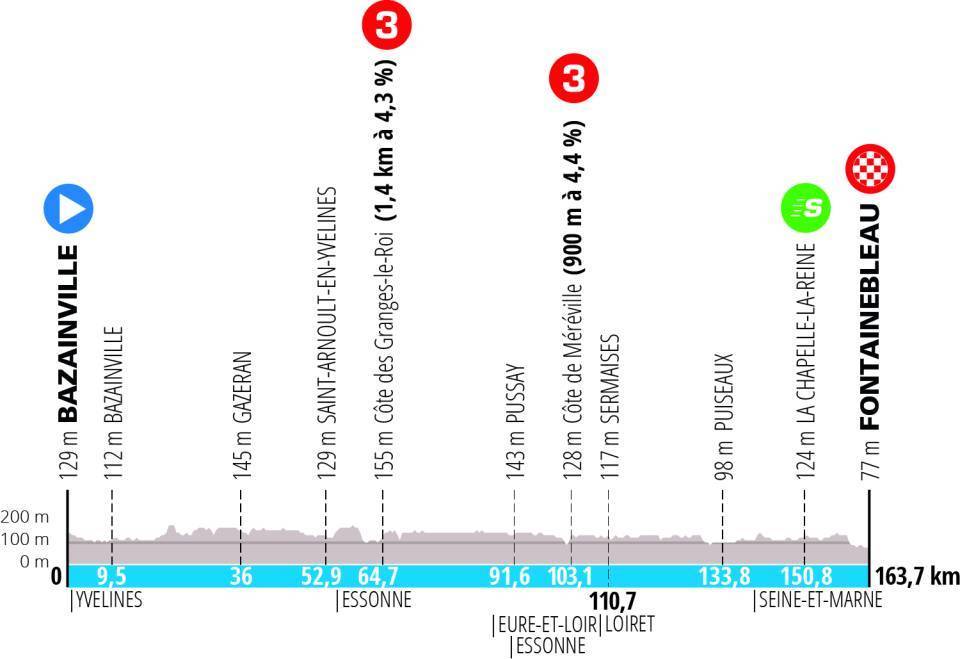 Flat to Fontainebleau but not a straight line. The X-factor is the weather forecast because if the wind gets up, and a breeze is sufficient given the exposed terrain, then the peloton can be split to pieces and the course with its change in direction seems designed with this in mind. 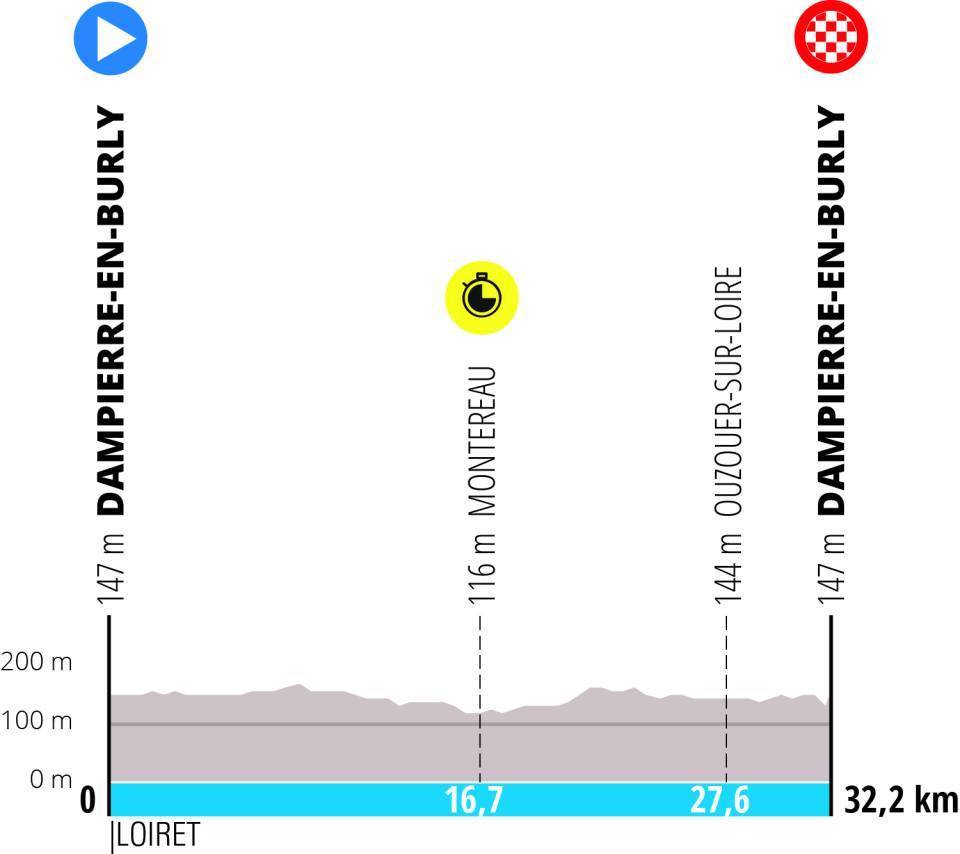 The team time trial is back. A staple of the sport for many years, the discipline has fallen out of favour of late, only Tirreno-Adriatico regularly has one. Otherwise it’s become rare, Vuelta a Espana uses it from time to time, the Tour de France last had one in 2019 and the Giro d’Italia hasn’t had one since 2015. The Critérium du Dauphiné in 2018. But Paris-Nice? Not since 1993 when ONCE won and their rider Alex Zülle went on to win the overall. The course here is flat, close to the Loire river and the just-reopened giant Dampierre nuclear power plant.

The twist here is a rule change where the time won’t be taken on the fourth of fifth rider like usual, but the first rider across the line from each team. So a team can burn through their riders along the way and then have their last rouleur “lead out” their GC leader; or adopt another strategy to unleash their best time trial rider and take the stage win. But every rider is credited with the time they cross the line, so a GC contender left behind by their team will lose time. Either way no longer is a team as fast as their fifth rider. It’s novel for Paris-Nice but has been used in team time trials in the past, indeed the concept of a TTT has changed a lot of the years but that’s for another day. 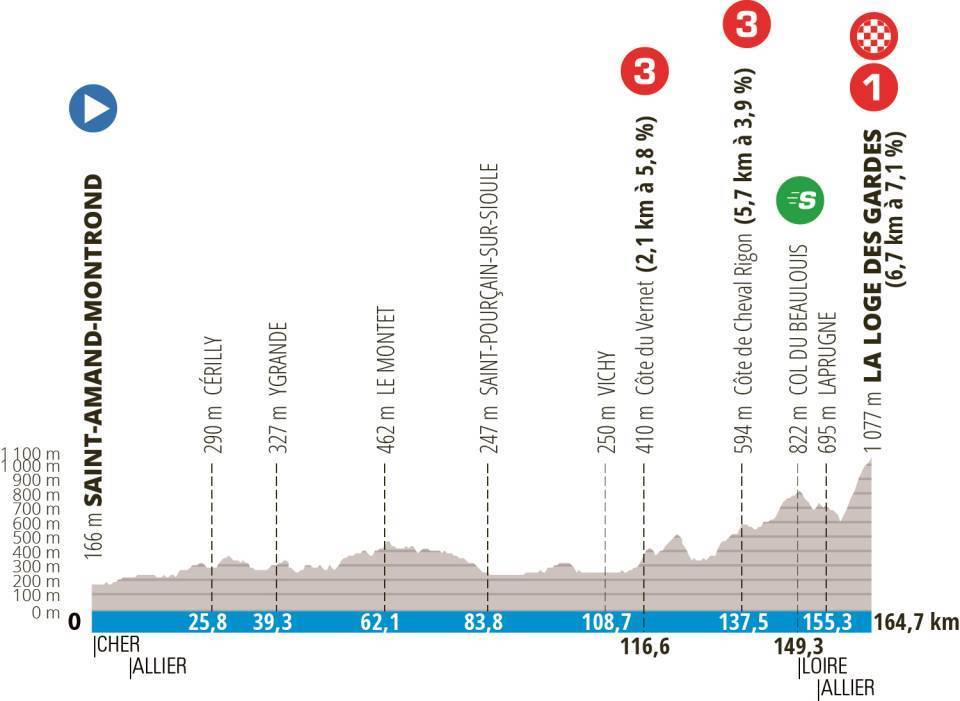 A route into the Massif Central, more specifically the Montagne bourbonnaise for the first uphill finish. After Vichy, it goes over the Col du Beaulouis, used in 2020 and at the top was an intermediate sprint despite being the hardest climb of the day… and again this time there’s a sprint despite it being a proper pass. 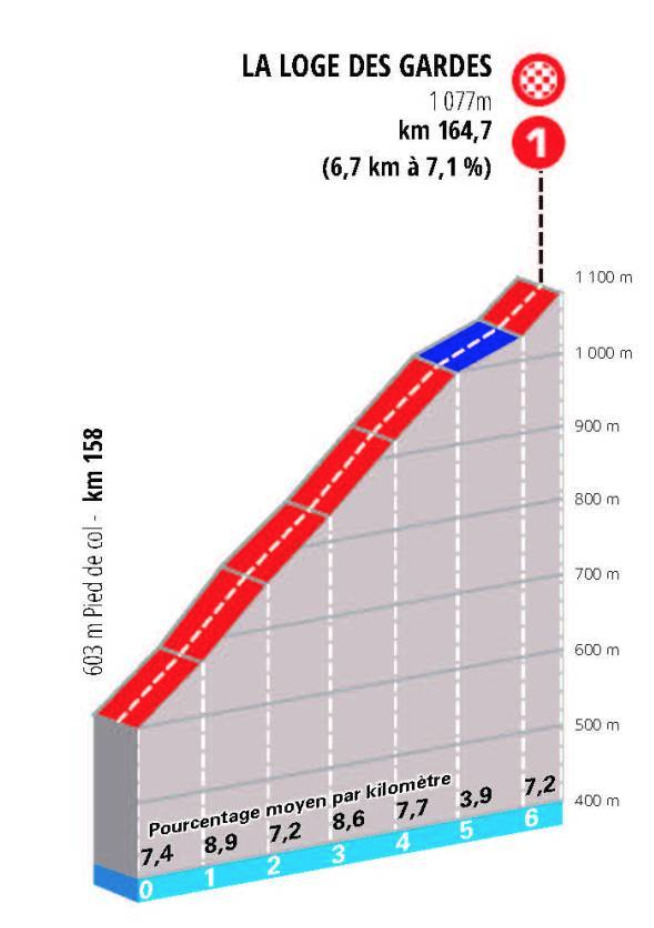 Then comes the summit finish at the La Loges des Gardes, a mini ski-station and activity park and a “new” summit finish that’s probably worth a recon. It’s via a small road that regularly tops 8% making it a selective finish. 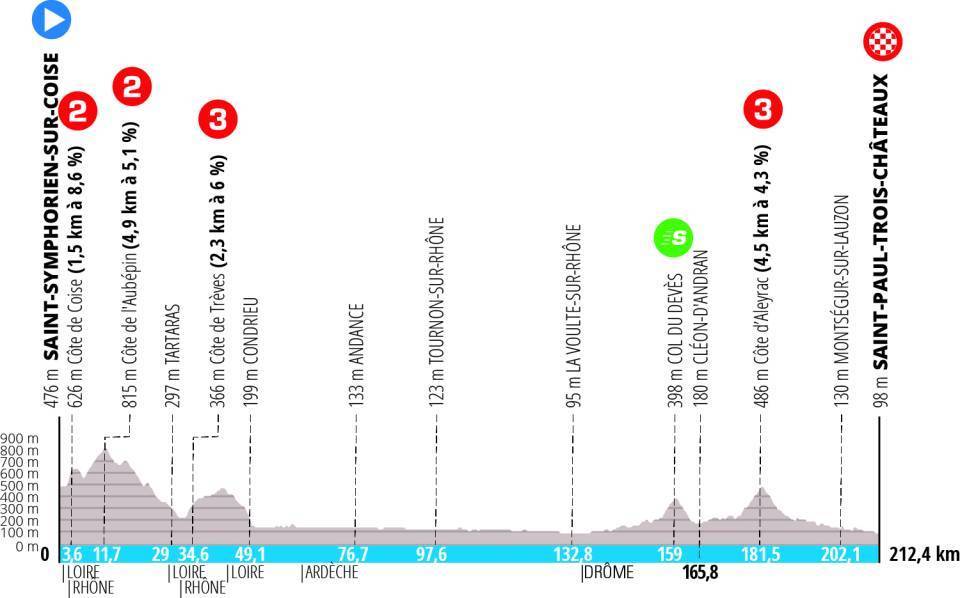 It’s not a culinary or gourmet route this year but here’s a food connection for this stage as the start in St. Symphorien is home of the Cochonou saucisson that is a big Tour de France sponsor. It’s over the hills to help a breakaway form before a dash down the Rhone valley. There are two late climbs, the first isn’t hard but it is exposed to the wind. The second of which to Aleyrac was a 2nd category climb when tackled in 2015 on a day when a few heavyset sprinters were dropped. It should be a sprint finish in St.Paul and as ever, watch out in case the Mistral wind’s blowing. 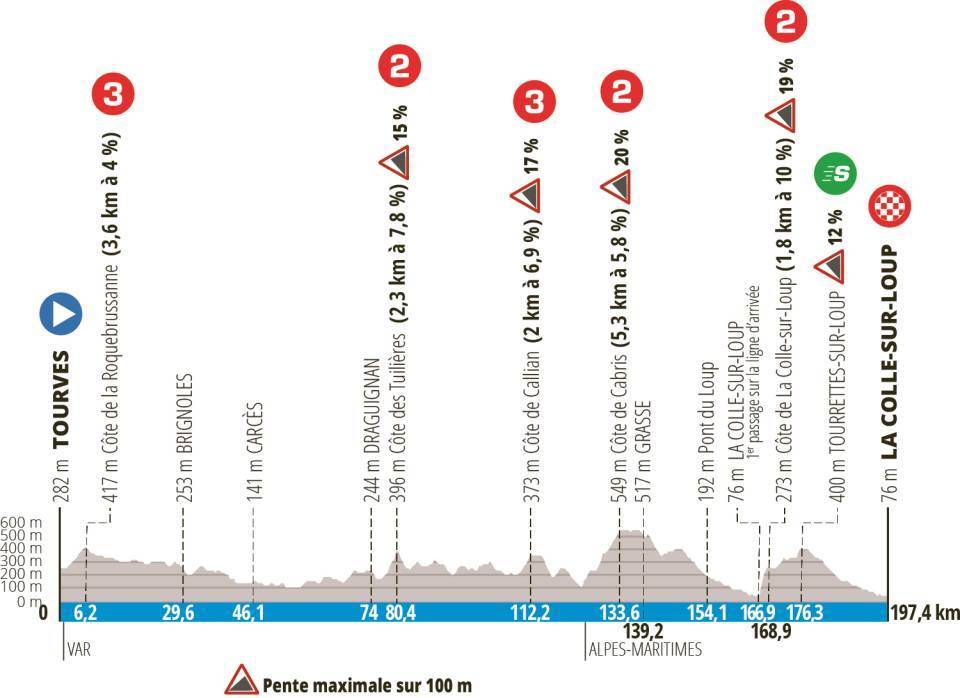 The “wall” stage with a collection of climbs all with steep sections before the finish in La Colle-sur-Loup just behind Nice. There’s no map yet so the exact route isn’t know but it looks like the final climbs are on narrow backroads and that the last climb is the same as the hectic stage of 2018 where Rudy Molard won from the breakaway. 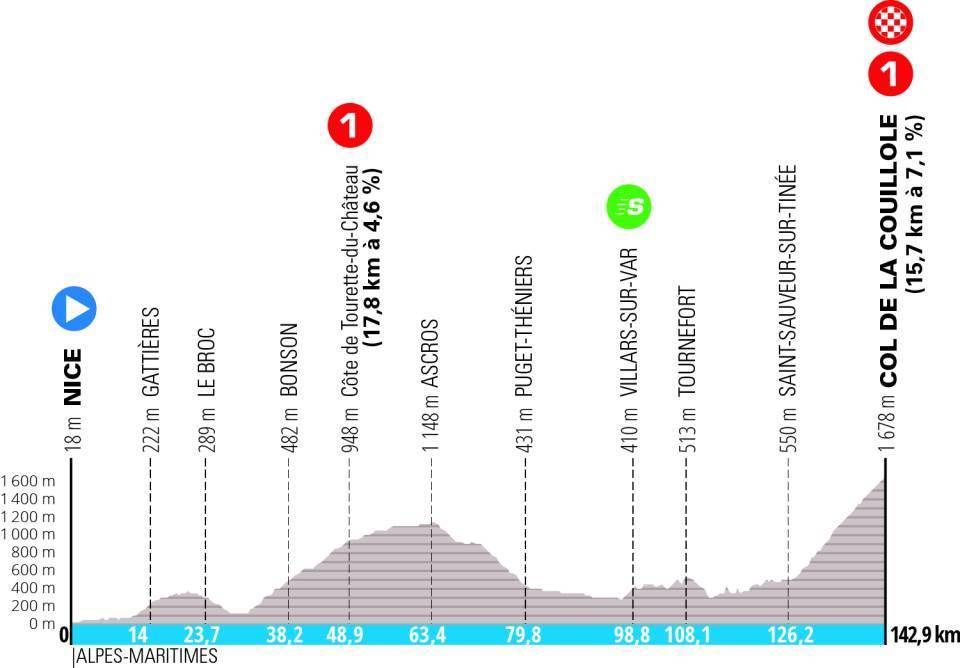 The summit finish stage with the Col de la Couillole on the eastern flank from the Tinée valley. At 1,678m it’s a high climb but arguably the length is the defining feature, 15km at 7% is a lot for March and it’s largely a gradual climb, riders will crack one by one under the pace. 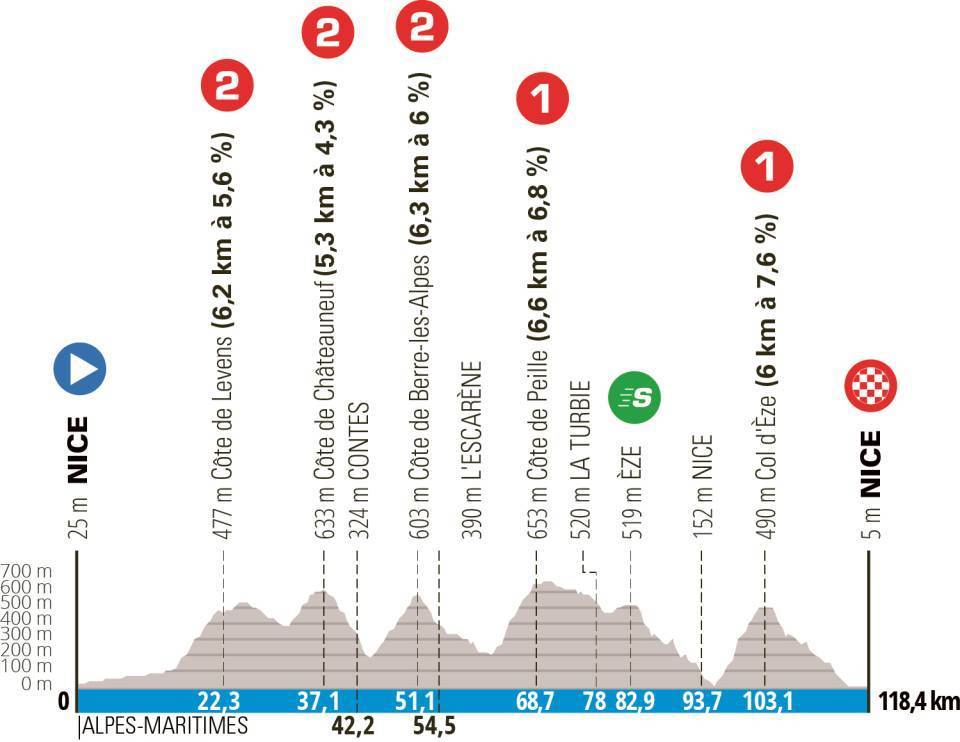 The now traditional dash around the hills behind Nice with the steep climb to Peille, Eze and down to Nice before tackling the Col d’Eze. Look closely at the profile and the final climb has a steep middle section, this is not the traditional route up but a copy of last year’s route with the the Chemin du Vinaigrier and a kilometre at 13% before picking up the main road.

The Verdict
The novelty is the return of the team time trial and at 32km there’s the chance for the big squads to take time and the rule change is a curiosity, it’s a break from the UCI rulebook but organisers can ask for derogations and if it works, maybe it could become a feature and it’ll give team managers plenty to plan and something to talk about on a Tuesday afternoon.

The other early stages offer sprints but will be enlivened if the wind gets up and race takes on the familiar pattern with an uphill finish in the Massif Central, the Rhone valley, a hilly stage, summit finish and the now classic Nice-Nice stage. All the ingredients are there for a lively race.

Teams
The 18 World Tour teams, with automatic invites for Total Energies and Lotto-Dstny and wildcards for Israel-PremierTech and Uno-X, the same as the Tour de France. It’s an obvious choice for Paris-Nice and the Tour de France but we’ll see if anyone else gets a look-in at the Dauphiné in June or if the World Tour is this de facto 18+2+2 selection.

Riders
Jonas Vingegaard (Jumbo-Visma) is the headline attraction and thanks to the team time trial, already the obvious pick for the final win. Last year’s runner-up Simon Yates returns while Romain Bardet and David Gaudu take part and will hope to avoid hopes being dashed in the crosswinds.