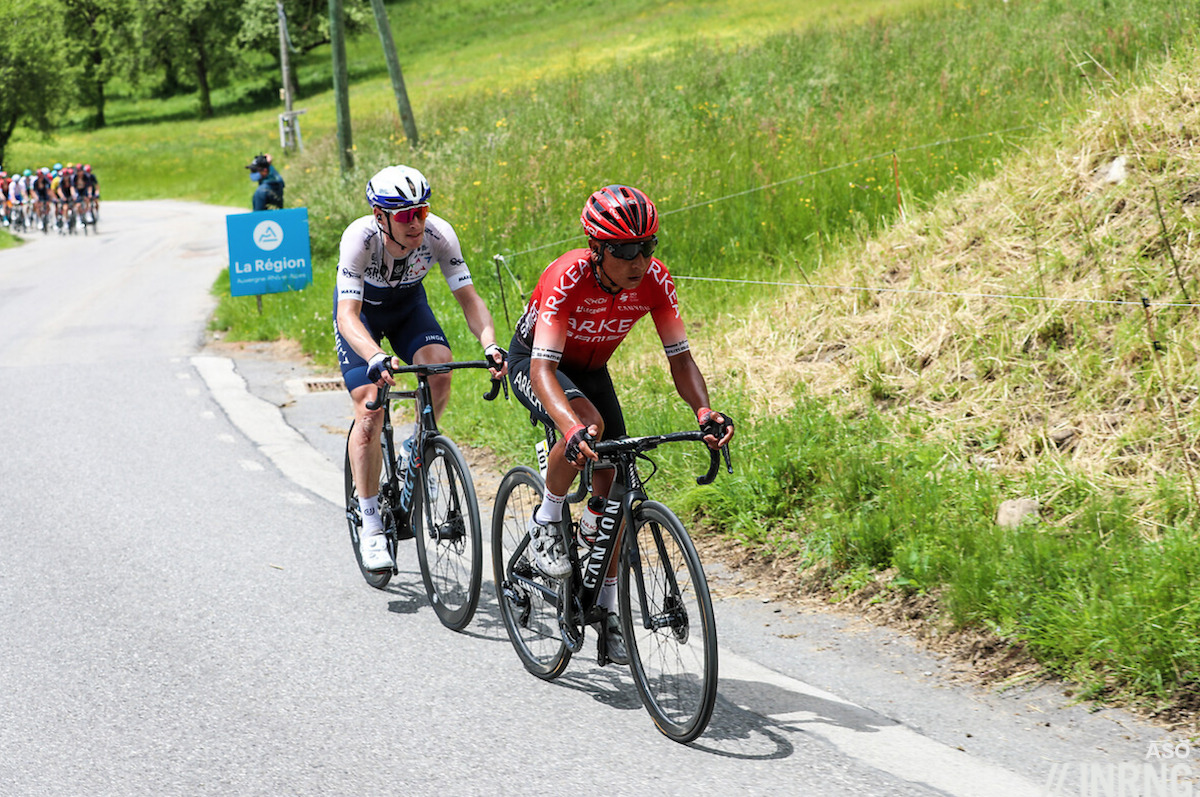 “Nairoman, Nairoman, he’s not a cyclist” goes the lyrics to the song from Colombian TV commentators as they play up the idea that Nairo Quintana is no mere bike rider, he’s a superhero. As for him, well it turns out he just wants to be a cyclist and for the music to play on.

In a defiant press conference where many expected he’d announce his retirement, Quintana launched a surprise attack, saying he’ll fight and he still wants to compete in the biggest races and by implication he wants a contract with a European team, not for him the demotion to a local Colombian squad like Miguel “Superman” Lopez.

Arguably Quintana could have won the 2015 Tour de France were it not for a big time loss on the opening stage in the crosswinds. Yet more times than not he seemed to sense which wind was blowing and could handle himself in the crosswinds like a mini-Flandrien. But if he could master the echelons, a media storm is another matter.

Background
From March 2019 the UCI banned the use of tramadol, an opioid pain killer, in competition. Cycling had a problem where some riders were using this drug in races, with concerns it was making some riders clumsy and crash-prone, plus it is addictive and so powerful that if you need it you probably shouldn’t be racing a bike. When the the World Anti-doping Agency (WADA) tested stored samples for tramadol it found over 4% of cyclists were using tramadol. The UCI asked WADA to ban its use but in the absence of WADA moving the UCI went ahead by itself. Cycling’s governing body wrote its own rules to ban tramadol, setting its own penalties and running its own testing regime.

Fast-forward to 2022
Two samples taken from Quintana during the Tour de France showed tramadol announced the UCI in August. The samples were a week apart, and given the drug has a half life of about seven hours in the body, it implies repeat use. Consequently Quintana’s results from the Tour de France, including his sixth place overall, were disqualified.

Technically Quintana wasn’t done for a doping offence. It’s nuance but tramadol wasn’t and still isn’t on the WADA banned list (although it will be next year). Remember cycling’s governing body had created an extra rule and with it a corresponding penalty, namely disqualification of results. But that was it, there was no ban and when the news broke of the two positives Quintana was planning on riding the Vuelta a España, and eligible to do so. Only he decided to pull out saying he wanted to prepare his defence, and unsaid, presumably the relationship with the Arkéa-Samsic team had broken down.

In a twist of fate Quintana and Arkéa-Samsic had agreed a new three year contract and the team announced the deal, but it hadn’t been signed by both sides. Only the tramadol case appeared at this exact moment and the pens went down. Had Quintana signed perhaps he could still be in the sport as the French team might not be able to break the contract if it was only over a UCI health rule breach; although they might have tried to cite damage to their image. Anyway without speculating too much things could have turned out differently if just the timing had been different.

Out of contract, Quintana and his entourage were suggesting last year that he was close to a deal but things ended up with some teams openly denying any links. Things went quiet until last week it was reported the Corratec team, a newly promoted ProTeam, was interested. But team manager Serge Parsani said they didn’t have the budget, plus they’d signed up to the MPCC group of teams. The MPCC has led on the issue of banning tramadol for years before the UCI took up the cause but the MPCC’s own rules – I’ve read them so you don’t have to – do not to block a team signing Quintana. Yes these same rules say member teams can’t hire ex-dopers but again, but remember technically this isn’t a formal doping case. But good luck to a new team saying it’s not technically against the rules to sign a rider found to have used a substance the MPCC has long tried to ban. Make a Venn diagram of teams that are not in the MPCC and those that have room to recruit an extra rider and it’s bound to be small. 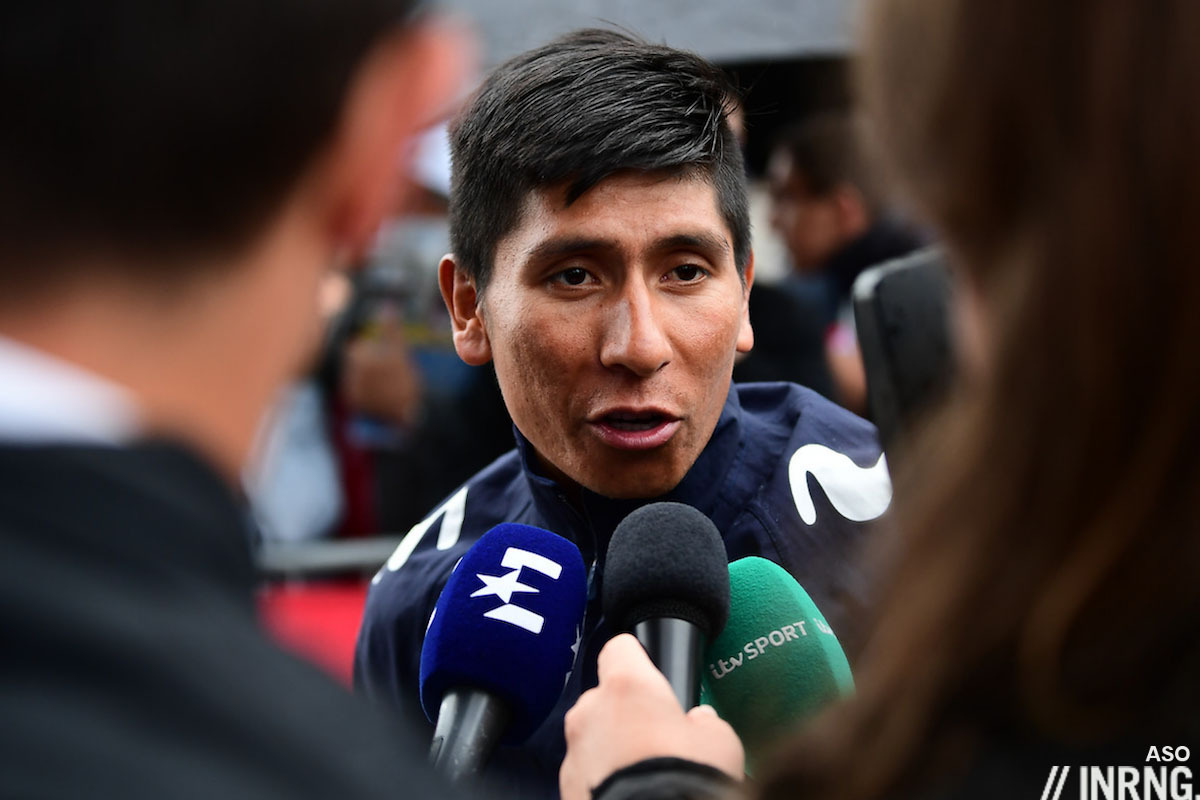 Quintana’s problem though is more than finding a vacancy. There’s a saying in politics that “if you’re explaining, you’re losing“. It’s much easier to have an internet meme with a picture of Quintana and block capitals declaring “two positive tests for a banned drug”. Trying telling the public that Quintana wasn’t actually done for doping and that he’s taken the regulatory punishment and is eligible to race, well it’s nuance that few teams looking to hire him want to explain. Plus it all happened in the Tour de France, so add “disqualified from Tour de France” to the same meme and it’s disastrous.

Still, there is some explaining to do. Quintana denied tramadol use but that’s hard when two tests separated by several days are involved, one sample could be contaminated but the odds on two? Still his defence team appealed and tried to blame the testing protocols saying it could have created a false positive, but didn’t come up with much to say how or why, and lost. There are no easy answers but as he took questions from the Colombian media in today’s press conference he set out his ambitions and options but the one big unanswered question is the how and why of the tramadol tests. These questions can also go to the Arkéa-Samsic team too.

Eligible to race under the rules, Quintana’s problem is now one of reputation and it’s here we can see how much the sport has changed. Not long ago a rider with an actual doping conviction and a poor reputation at that could still expect a contract. If this was happening a decade ago Quintana could have probably got a ride at, say, Lampre (their rider Michele Scarponi stayed on the books despite getting a ban for working with Michele Ferrari), Astana (even the UCI tried to cancel their licence) or Katusha (they signed Danilo Di Luca after his CERA sabbatical); or look at Vacansoleil hiring both Riccardo Ricco and Ezequiel Mosquera despite all their excess baggage. In many cases tainted riders came cheap and the teams were incentivised to hunt points. Today several teams crave points but they’ll do it without Quintana. Plus age is probably another factor though, he’s about to turn 33.

Conclusion
Nairo Quintana’s cycling career isn’t over yet, he’s vowed to fight on. Technically the tramadol tests aren’t doping cases but good luck explaining the nuance and alas it’s not something he’s attempted either. Perhaps in the past he’d have got a contract from teams who wouldn’t ask many questions but these days teams are acutely aware of reputational risks. Whatever Quintana could bring in terms of results and a following is outweighed by the still unexplained tramadol tests.