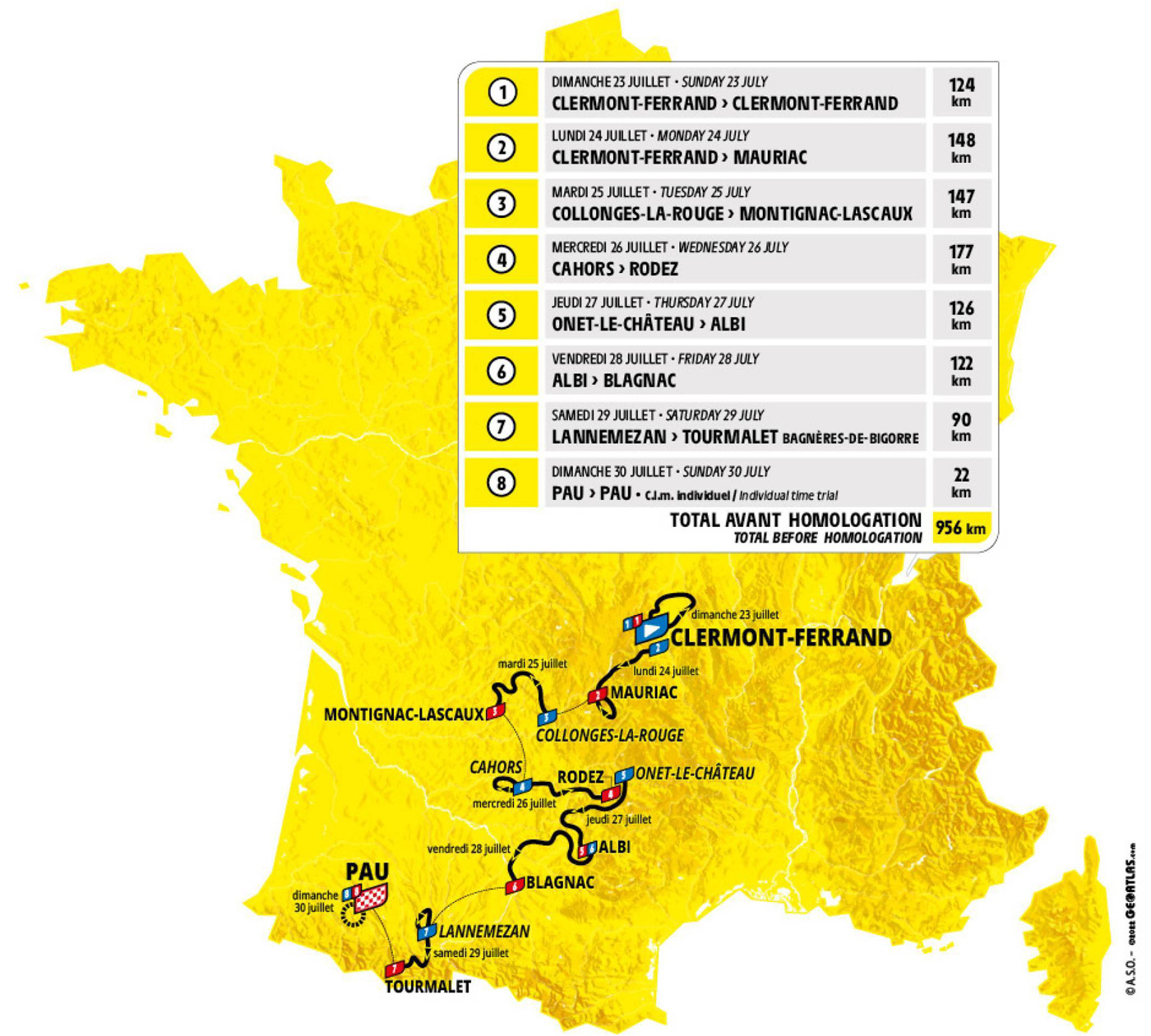 The Tour de France Femmes route is out and it’s a scenic one that heads for chocolatine country. Expect red bricks, sunflowers, holiday makers and a savage summit finish on the Col du Tourmalet. 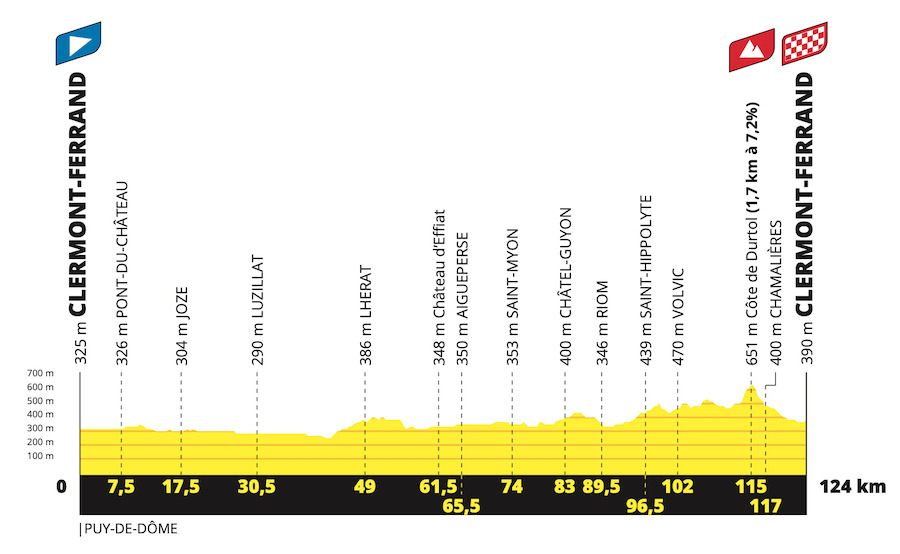 A ride out of Clermont-Ferrand and probably past the giant Michelin factory that is often associated with the city. It’s flat lands at first but things get harder towards the finish. The roads climb to Volvic – yes, where the bottled water is from – and the climb at Durtol is an ideal launchpad with only a fast descent via the snaking road of Chamalières to the finish. There’s a maillot jaune and whoever can take it can be in the mix for the coming days. 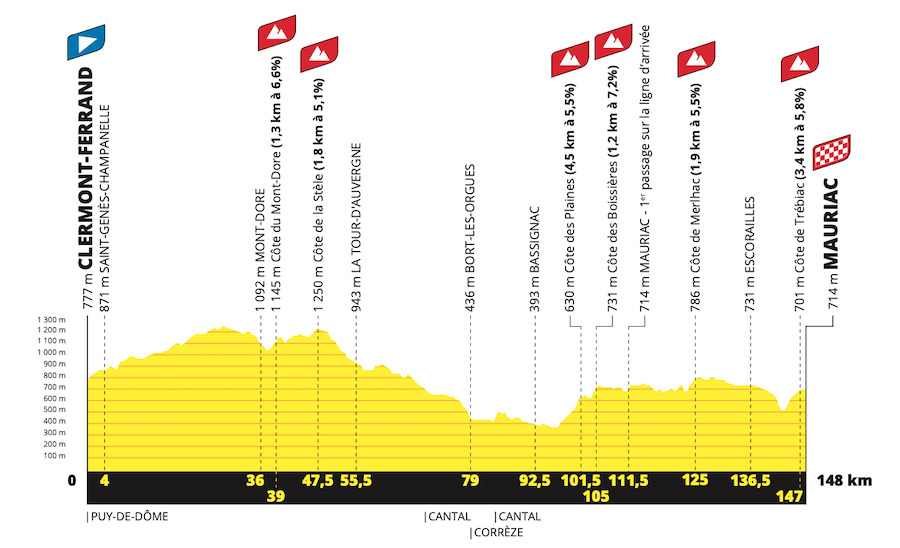 The long drag up to Mont-Dore, we don’t know the exact route but probably via the Col de la Croix-Morand and then lumpy roads to the Dordogne river and then some more. The uphill finish is just hard enough to suit the climbers but where a strong team can help with positioning and drafting. 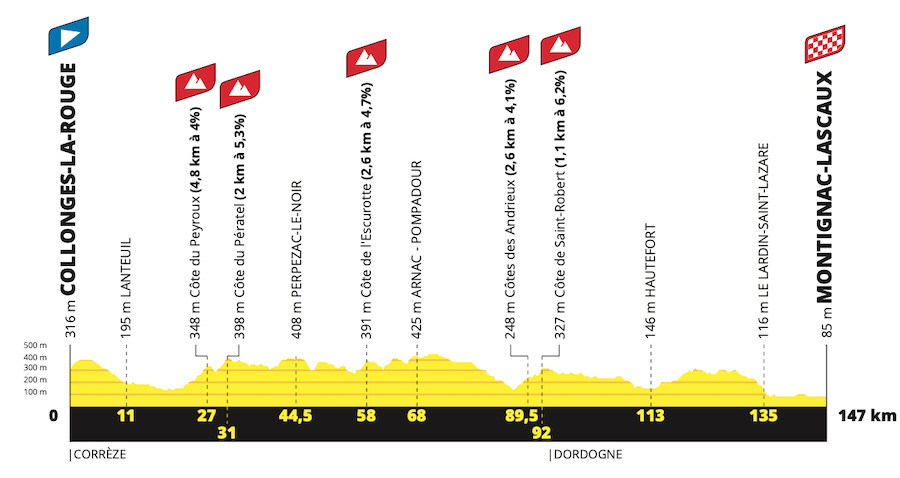 A likely sprint stage with a route that could double up as a bus tour itinerary. Collonges is famous for its maroon red brick buildings, Perpezac is scenic, Arnac-Pompadour (Pompadour for the locals) has royal and imperial history, Hautefort is an impressive castle before Montignac and the nearby Lascaux caves with their paintings. There’s more to say about the features than course as you’ve gathered by now but it’ll be pleasant to watch before a bunch sprint in Montignac by the Vezère river. 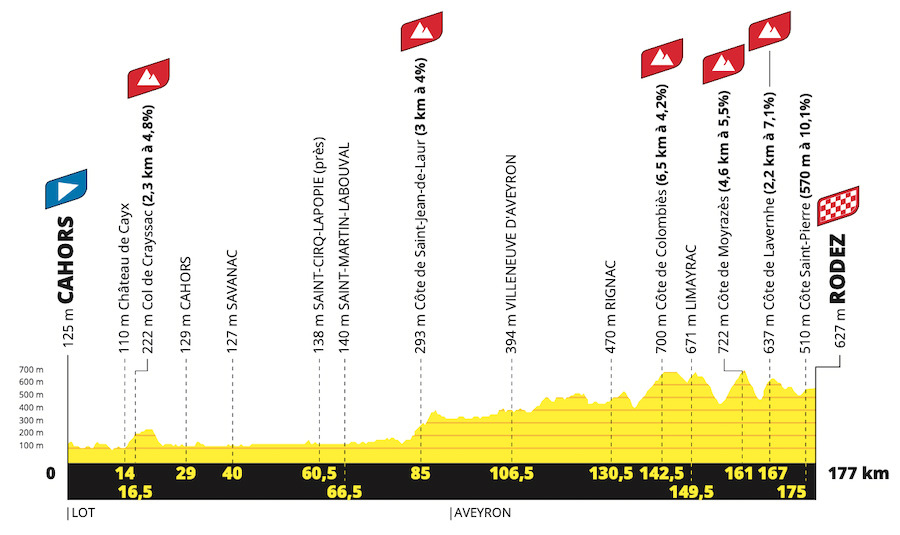 Sunflower country and a land of long lunches where the riders will need to fuel up for this “marathon” stage, at 177km it’s the longest in the race and the race snakes around the hills of the Aveyron with some lumpy roads and in the final the descents to Rodez are awkward. This looks like the most interesting stage of the race, not the crucial one but a course that’s open to attacks in the final. 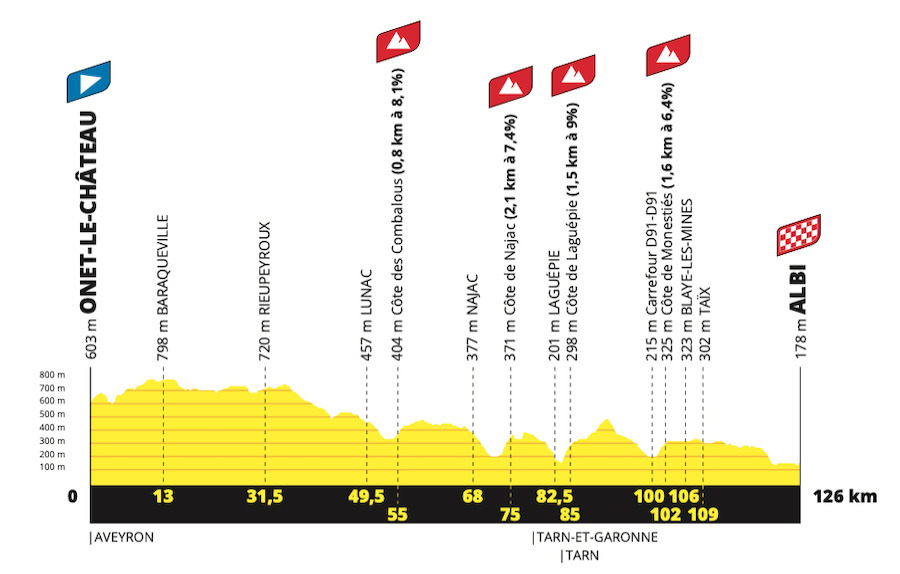 A scenic stage that passes by several tourist spots before a finish in the red brick city of Albi on the banks of the river Tarn. 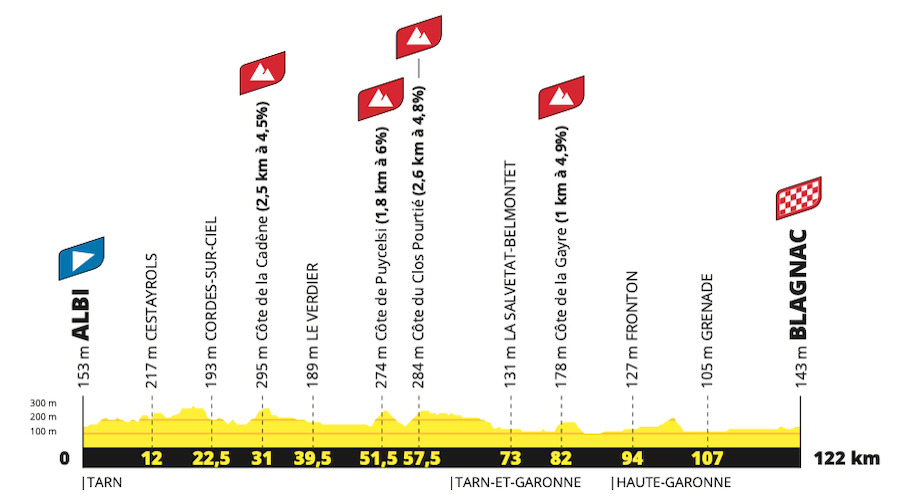 Scenic country with more sunflowers. This time the hilltop villages of Cordes-sur-Ciel and Puycelsi supply the postcards, the passage through the Gaillac and the Fronton vineyards offer more. Less scenic perhaps is the finish in Blagnac, a suburb of Toulouse that’s host to the airport and aerospace giant Airbus. 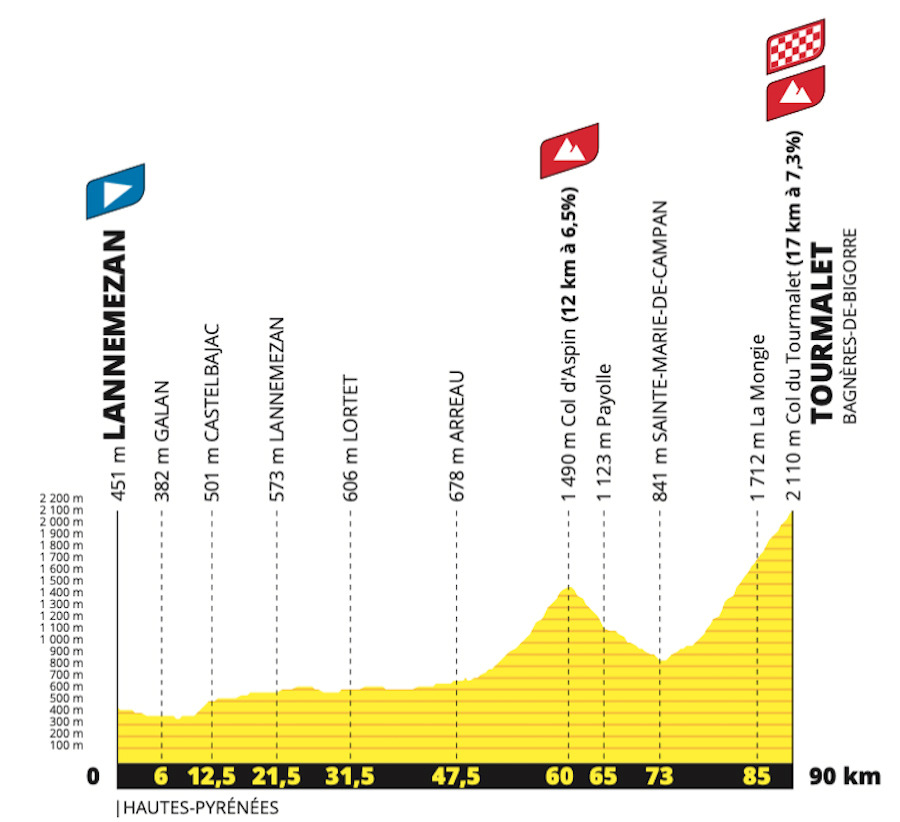 The crucial stage of the race with a loop out of Lannemezan before heading into the Pyrenees for the Col d’Aspin climbed on the harder side. A quick descent down to the valley and then the Col du Tourmalet and a summit finish well beyond the 2,000m mark. If the top-10 on the Grand Ballon-Markstein finish last time were separated by ten minutes, the gaps could be as wide on this hour long final climb. 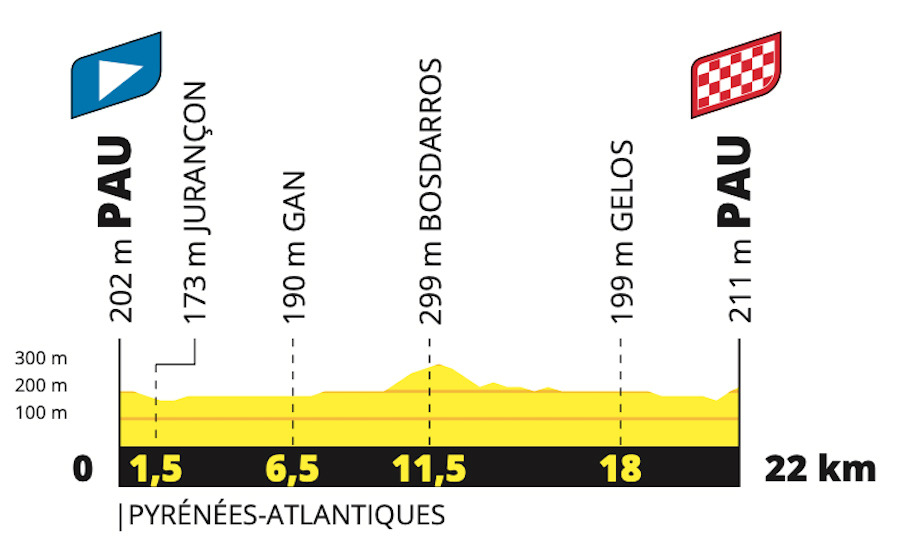 A surprise TT to settle the GC and give the rouleuses and specialists a shot at the stage win in the city of Pau. At 22km it’s got as much time trialling as the men’s Tour. 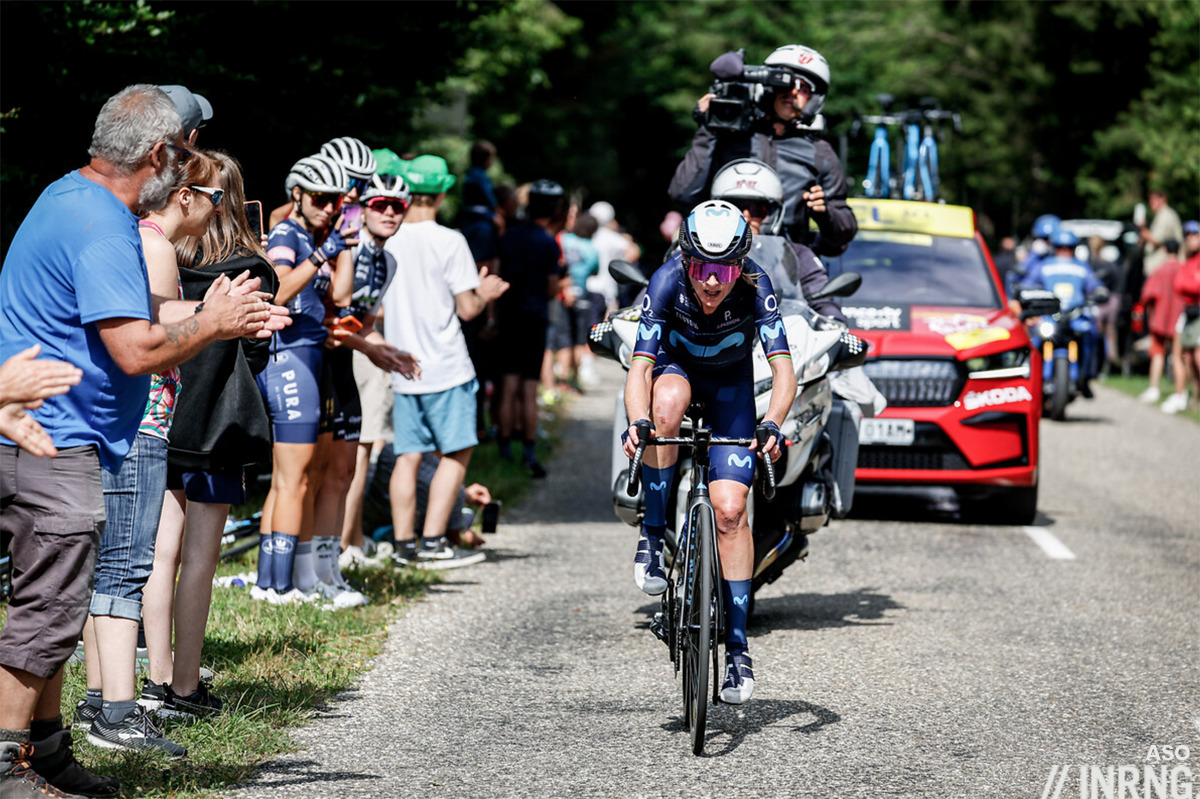 The Verdict
With only eight days, the Tour de France Femmes has both constraints and freedom to go where it wants. It doesn’t have to pretend to tour all of France but it probably requires a mountain stage or two in order to provide satisfaction. As we saw last time with the Vosges this needn’t be in the Alps or Pyrenees. The rest of the course can be as wished, a travelling format untied to any particular region or dogma, as long as enough regions and municipalities queue up to host this race but that’s looking good with the event off to a successful start.

The 2023 race takes place in south-western France and has something for everyone, yet probably not enough for everyone. There are sprint stages, but only two. There’s a big summit finish but only one mountain stage, but all in a bucolic scenery and where many tourists will be on hand to line the roads. If there’s only one mountain stage the Tourmalet has to count double, it’s a legendary climb but it’s also a long one. The time gaps could be big here but if someone – read Annemiek van Vleuten – does run away with the race… then Sunday’s time trial won’t be a repeat. The only regret with the course is that it could have arrived in the Pyrenees a day earlier to include an extra mountain stage, nothing savage but some medium mountains and perhaps a downhill finish.

With 22km, arguably this week is more balanced than the men’s race and it’s a surprise inclusion as race director Marion Rousse had spoken about time trials not being a ratings hit. It all makes for a complete race and July offers racing for the entire month.