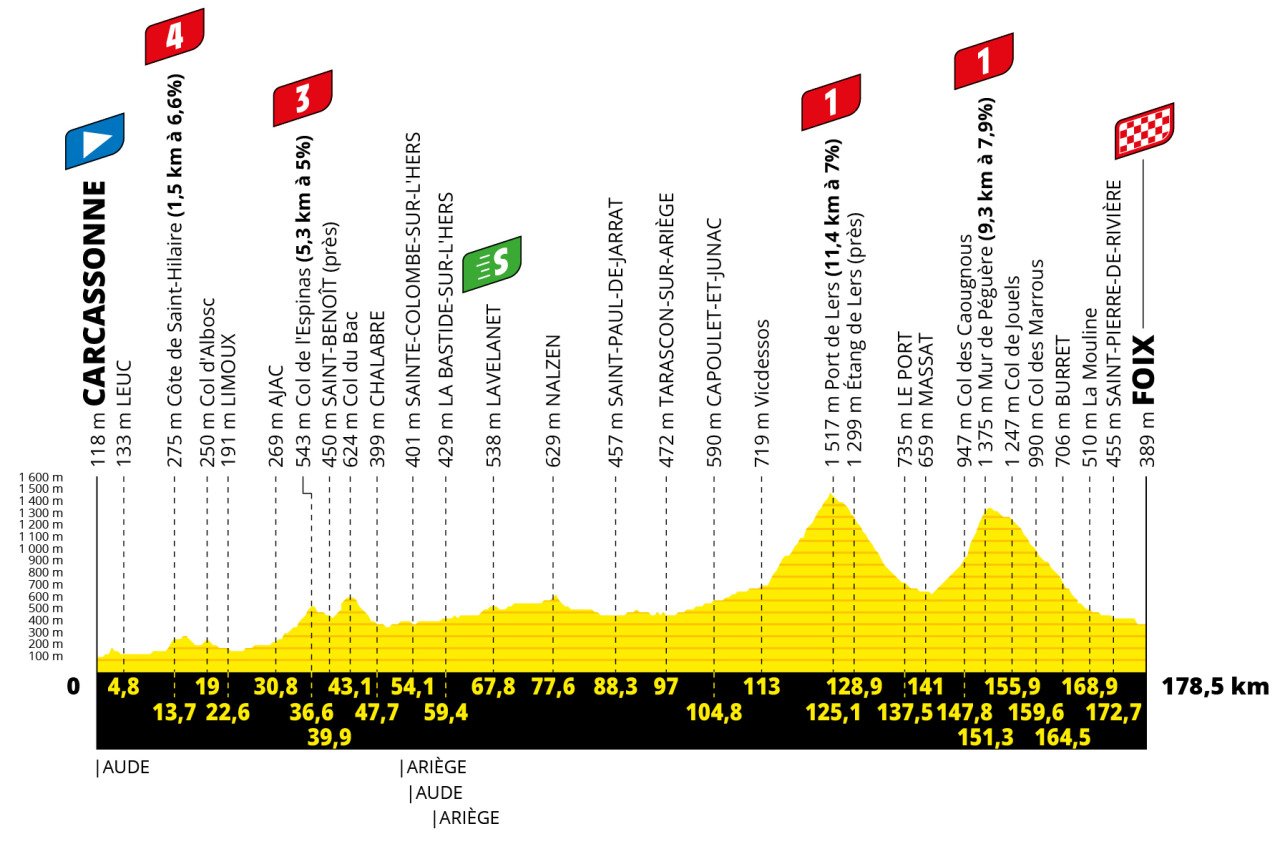 It’s into the Pyrenees with two short but hard climbs, especially the second one and then a tactical descent into Foix.

The Route: 178km and 3,400m of vertical gain. It’s a ride out of Carcassonne to Limoux and some hidden climbs, there’s the climb to Saint-Hilaire but also the small Col du Loup and the Col d’Al Bosc before a descent into Limoux. From here the Pyrenean foothills start with the small Col de l’Espinas (“thorn pass”), nothing surprising and (there’s another Col de l’Espinas not far away which is harder, today uses the easy one that hardly feels like a pass). 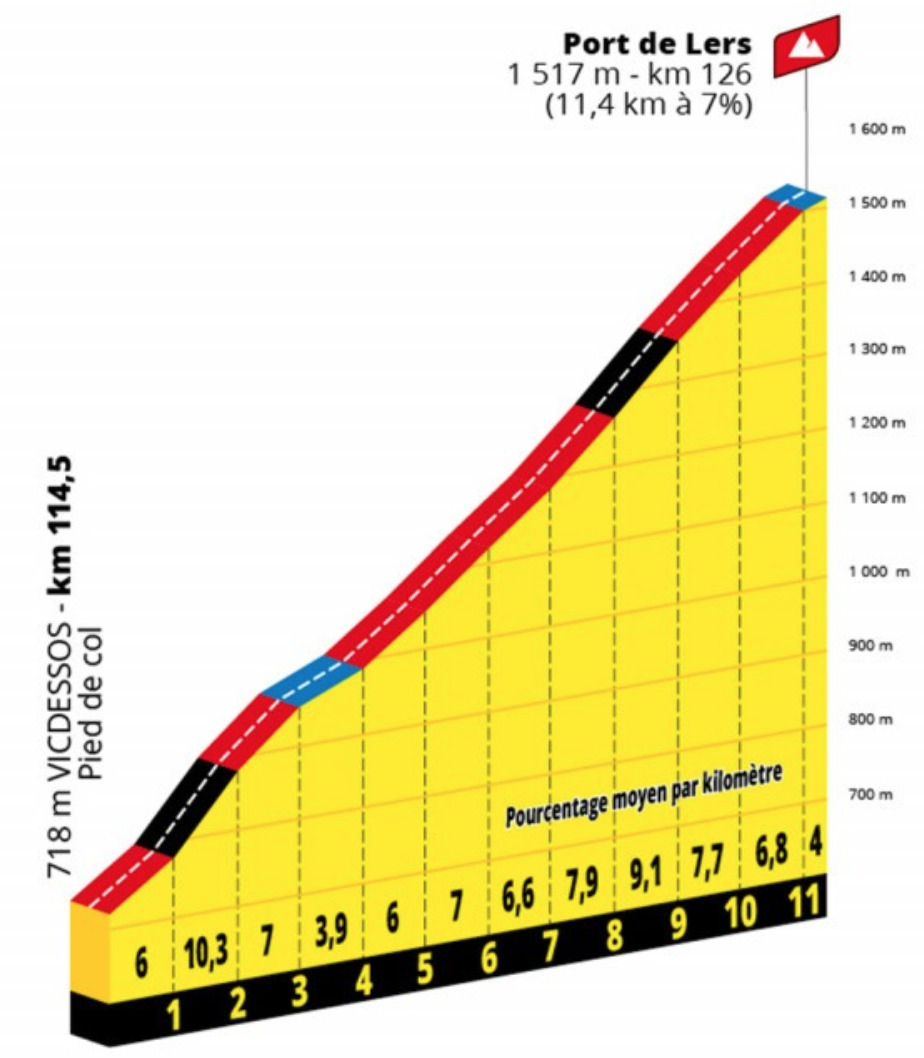 Here there’s more déjà vu with the same route from here to the finish as Stage 15 in the 2019 Tour (that day had the Prat d’Albis climb tagged on the end). The Port de Lers is 11km at 7% but with some steep sections of 11% at the start and midway again, the top flattens out before a fast descent with some hairpins but nothing wild to Massat and there’s no rest, the descent leads straight into the next climb. 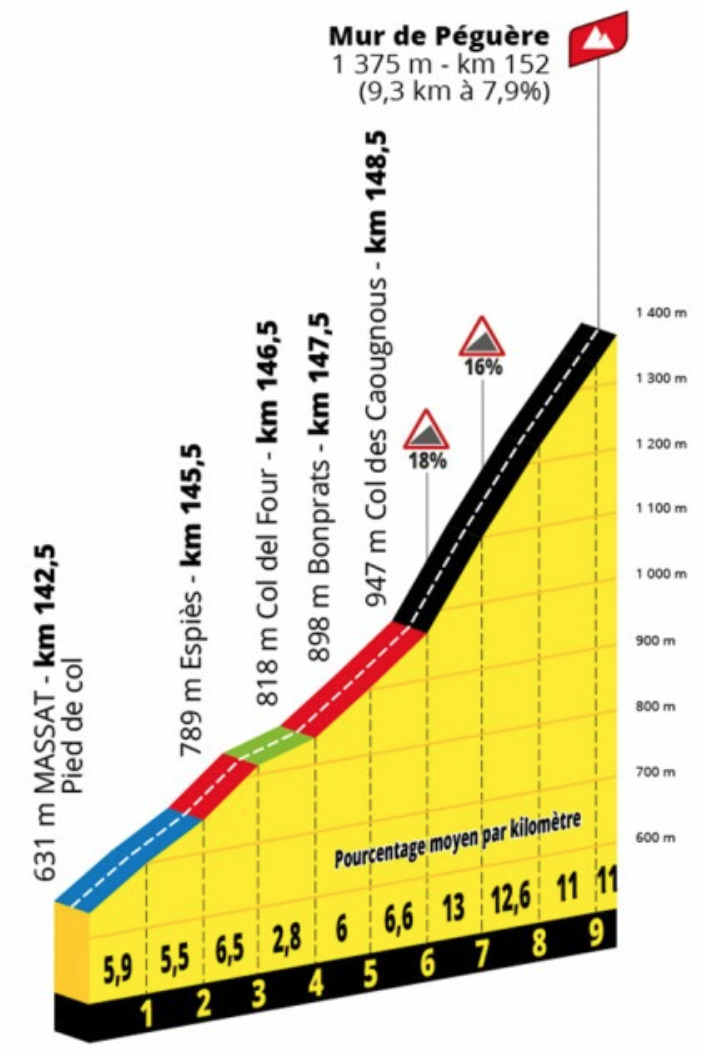 Mur sounds better than col, “wall” rather than “pass” and it’s a label invented by the race because it’s just the Col de Péguère for locals. The climb out of Massat goes via the Col de Four and it’s a steady road. It pitches up more to the Col des Caognous again on a wide road. Then they turn off for the Mur which featured in the 2012 and 2017. It was supposed to feature in the 1973 edition but the riders went on strike to protest at it because the road was a mess. It’s got double digit percentages with portions of 16% and 18%.

It’s followed by a 27km descent, a bigger road but the slope varies, the first part of the descent is gentle forcing the riders to pedal hard which is not good for anyone dropped on the way up because they must keep going. It’s only later that they drop down to the Col de Marrous does the slope get steep with 10%. It bends and twists through the forest, there’s rarely much visibility of what’s coming up and a rider with 20 seconds can be out of sight. 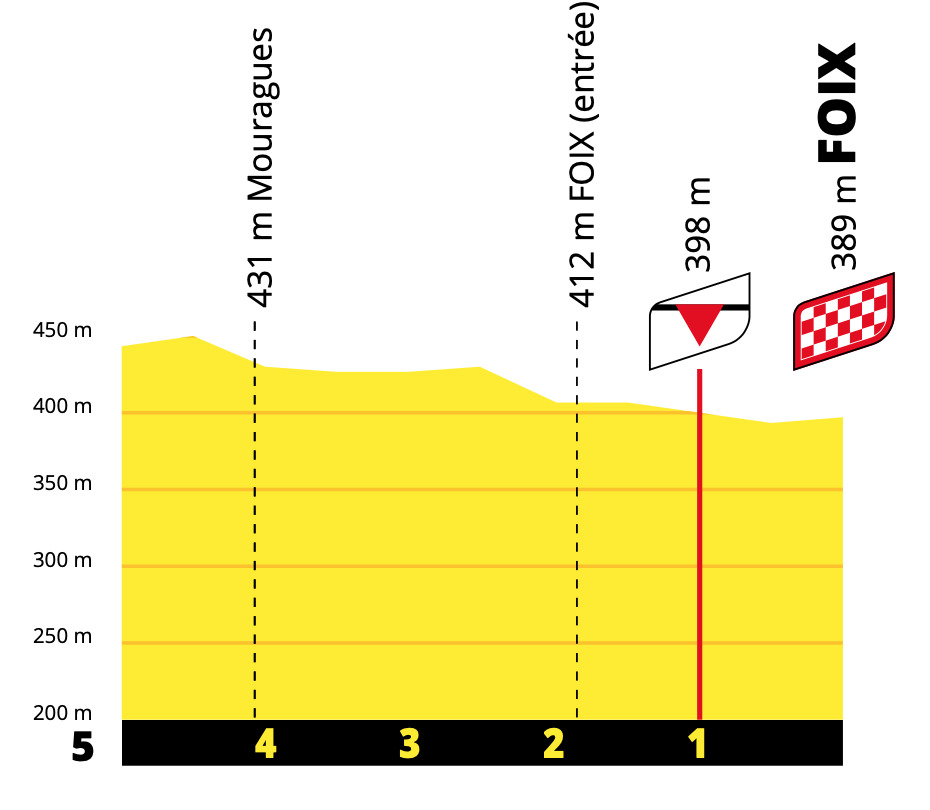 The Finish: they descend into Foix on a gentle slope and the road levels out in town. They go one way down the main street and just before the Ariège river they do a U-turn on a wide 180° bend, it’s not a dead turn but it’s slow and on the exit there’s just 200m to the finish line.

The Contenders: a good day for the breakaway to stay clear but the paradox of a relatively flat section at the start where it’ll be hard for the climbers to muscle their way clear; but any rouleurs who get away early will find the two mountain passes to come too hard to cross.

Thibaut Pinot (Groupama-FDJ) is an obvious pick but probably too easy, he might prefer long climbs and a summit finish rather than today’s steep climb and the long descent.

This has all the hallmarks of a Luis Leon Sanchez (Bahrain) stage… a decade ago, he’s now a bit long in the tooth but his style was to go solo on the descent. He beat Peter Sagan for this stage win in 2012 which suggests Michael Matthews (BikeExchange) might have a chance if he can cope with the climb.

Tom Pidcock (Ineos) is a pick, he can cope with the steep climb and today’s descent to the finish isn’t for daredevils but he won’t lose ground and he’s got a good sprint.

On paper Max Schachmann (Bora-hansgrohe) should win a stage but his form’s still in doubt. Lennard Kämna is ill? Patrick Konrad won a stage last year but repeating is a big ask.

Bob Jungels (Ag2r Citroën) has a stage win and was a solid 17th on the stage to Alpe d’Huez, if he can get over the final climb in contention he’s able to barge clear on the descent or win a small sprint.\

Bauke Mollema (Trek-Segafredo) looks like a pick but the form’s also in doubt, likewise Dylan Teuns (Bahrain) but he’s handy in a sprint from a group so higher rated. Michael Woods (Israel) is chasing a stage win and would prefer it to be on top of the Col de Péguère, and his wins are usually solo because he tends to lose out in a sprint.

Astana are having a tough Tour and a torrid season but Alexey Lutsenko could strike today, he’s good on shorter climbs and packs a decent sprint.

Lastly there’s the GC contest and the final climb is very hard, there’s a good chance of a battle here, it’s just that a breakaway ought to be well clear. Tadej Pogačar (UAE) packs a sprint.

Weather: sunny and 30°C with a northerly breeze that could gust to 30km/h. There’s also an outside chance of a thunderstorm or a downpour later. 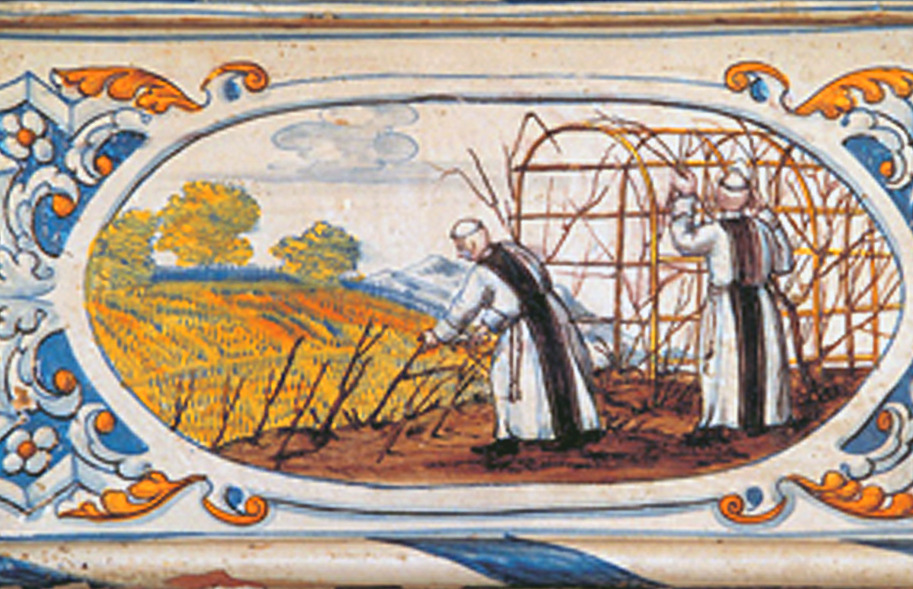 Food and drink: the race goes through Limoux, home of blanquette, a sparking wine. But not any sparkling wine, the blanquette de Limoux is said to be the world’s first sparkling wine when it was first made by Benedictine monks in the nearby Saint-Hilaire abbey, it predates Dom Pérignon’s champagne by over 150 years. Limoux’s wine is a renaissance wine but isn’t celebrated – few wine critics rave about it, no rap lyrics cite it – but it is value compared to champagne whose price is jacked up by fixed supply and global demand. Blanquette has the local grape mauzac as the dominant variety, there is also crémant from Limoux which has chardonnay as the main grape.