Who Can Replace Nibali? 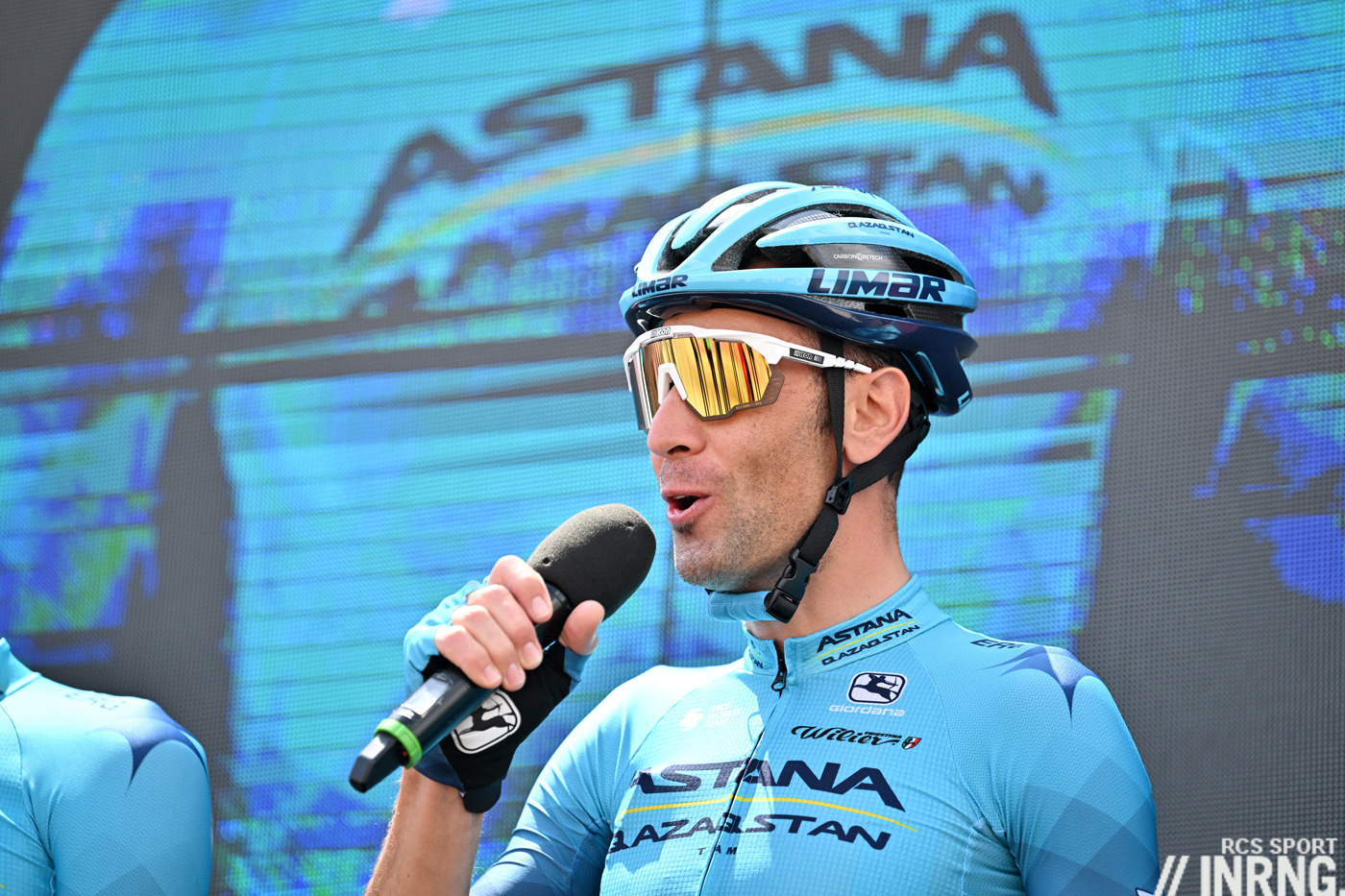 As friends on the Bidon podcast remarked in their Giro preview show, the Giro is on course for the longest ever streak without an Italian winner, the last time the race had a home winner was Vincenzo Nibali in 2016. He’s just announced he’s retiring and it’d be nice to be able to list several candidates rising up the ranks who could replace him but that’s not easy… still let’s have a go. 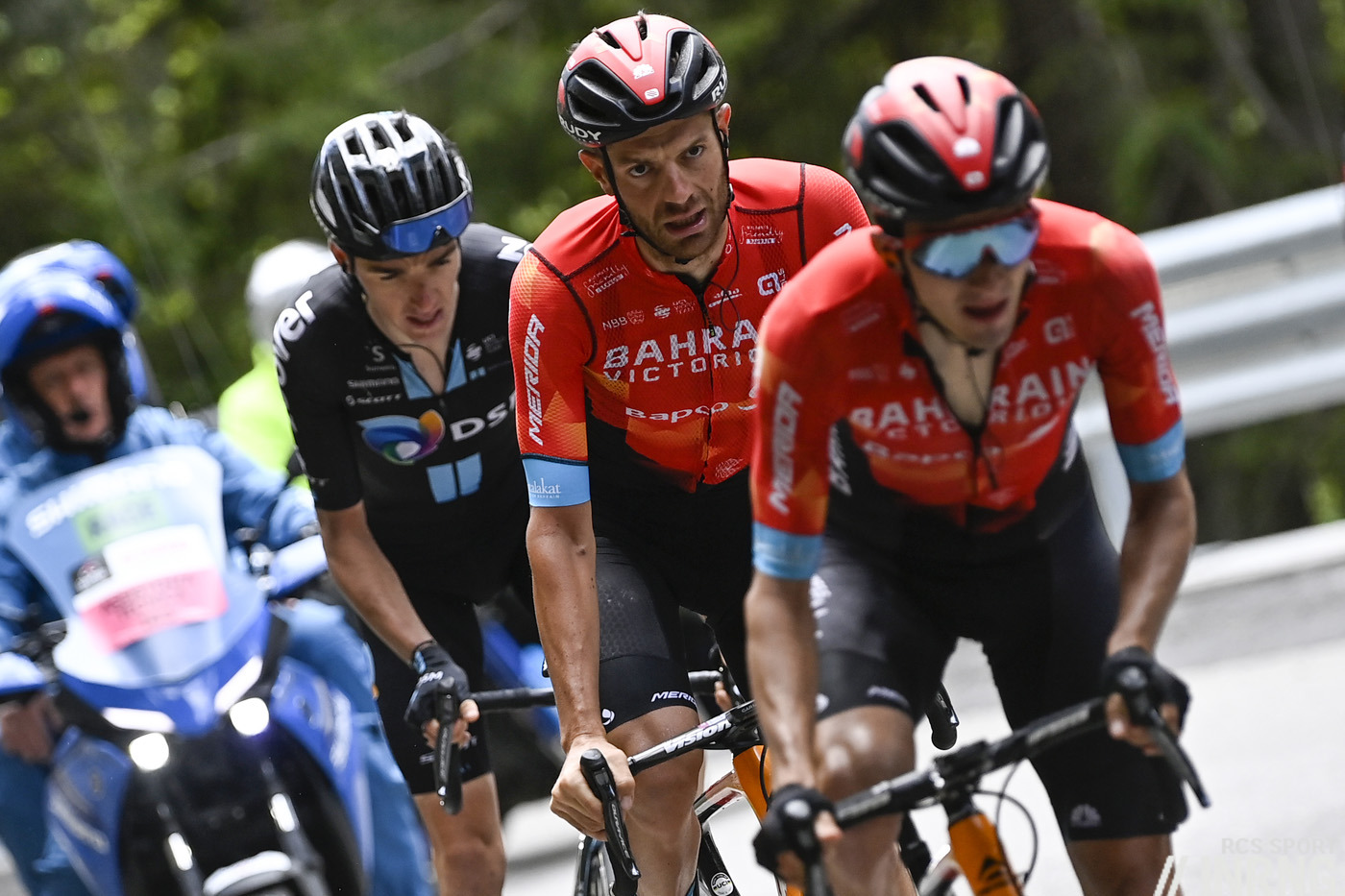 Obviously there’s Damiano Caruso (Bahrain) given he was second in last year’s Giro. He’s going to the Tour de France and so he could return to try and win the Giro in 2023 aged 35. Only it’s hard to see the win, his second place last year was down to steady, consistent riding but the gap between his second place on the podium and the top step was very high.

Antonio Tiberi has time on his side. The Trek-Segafredo rider is being groomed for stage races after winning the time trial at the junior world championships in 2019. He’s 20 years old now and he and his team are no rush, he’ll do his first grand tour in the Vuelta. The likes of Remco Evenepoel and Tadej Pogačar can condition us to thinking that riders can win big by the age of 21 if they’ve got the talent but it’s not so simple, other riders can require more time so Tiberi could be worth waiting for.

At the suggestion of Richard S in the comments below, let’s add Tiberi’s team mate Giulio Ciccone into the list here. While some wait for Tiberi, Ciccone’s probably trying the patience of some Italian fans as his progress hasn’t been so rapid. A Giro mountain stage win in 2016, another stage and the mountains prize in the 2019 Giro but since then some steady rides rather than more progress which makes the current Giro an important test. Is he really a climber for the big mountain passes or better suited to shorter, punchier mid-mountain days?

Is Alessandro Covi going to turn out more like Diego Ulissi or Vincenzo Nibali? The 23 year old “Puma of Taino” is a big talent. He was second on the Strade Bianche stage of the Giro last year and has two wins this season already, one of them saw him beating Miguel Angel Lopez in an uphill finish. A future Giro winner? At the moment he’s not talked about in this way but he looks a promising rider all the same. 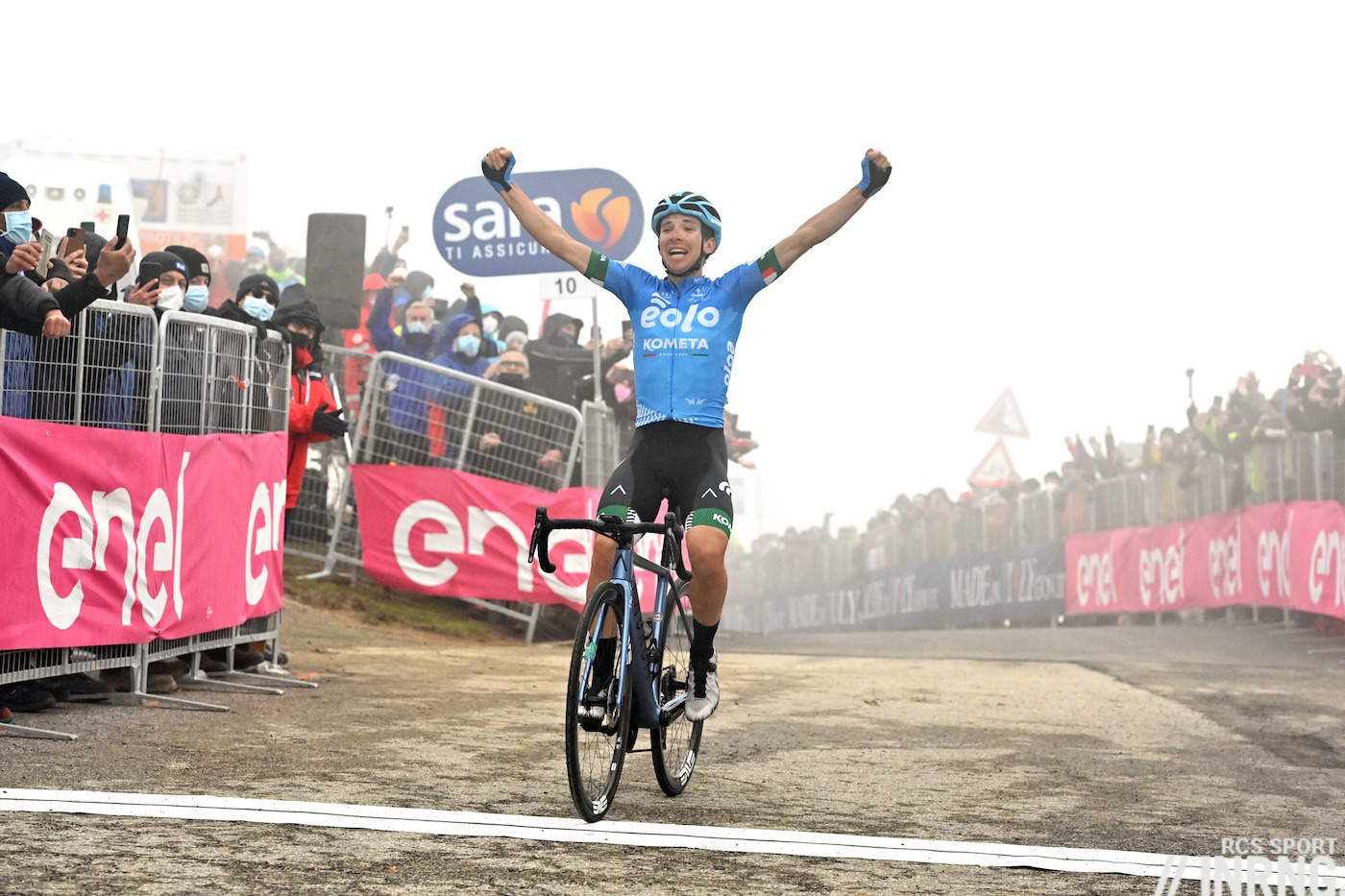 Lorenzo Fortunato (Eolo-Kometa) won the Zoncolan stage of the Giro last year. At the time it was a surprise, a plucky climber who held on to win the stage. But he’s backed this up with some solid riding and it’s said he’s bound for the World Tour.

Bora-hansgrohe ride the Giro now with three leaders plus Lennard Kämna as a joker for stage wins. There’s also Giovanni Aleotti who turns 23 soon. Second in the Tour de l’Avenir in 2019 behind Tobias Foss, he was a solid 11th in the Tour of Poland last year and won the Sibiu Tour too so he’s starting to deliver already. 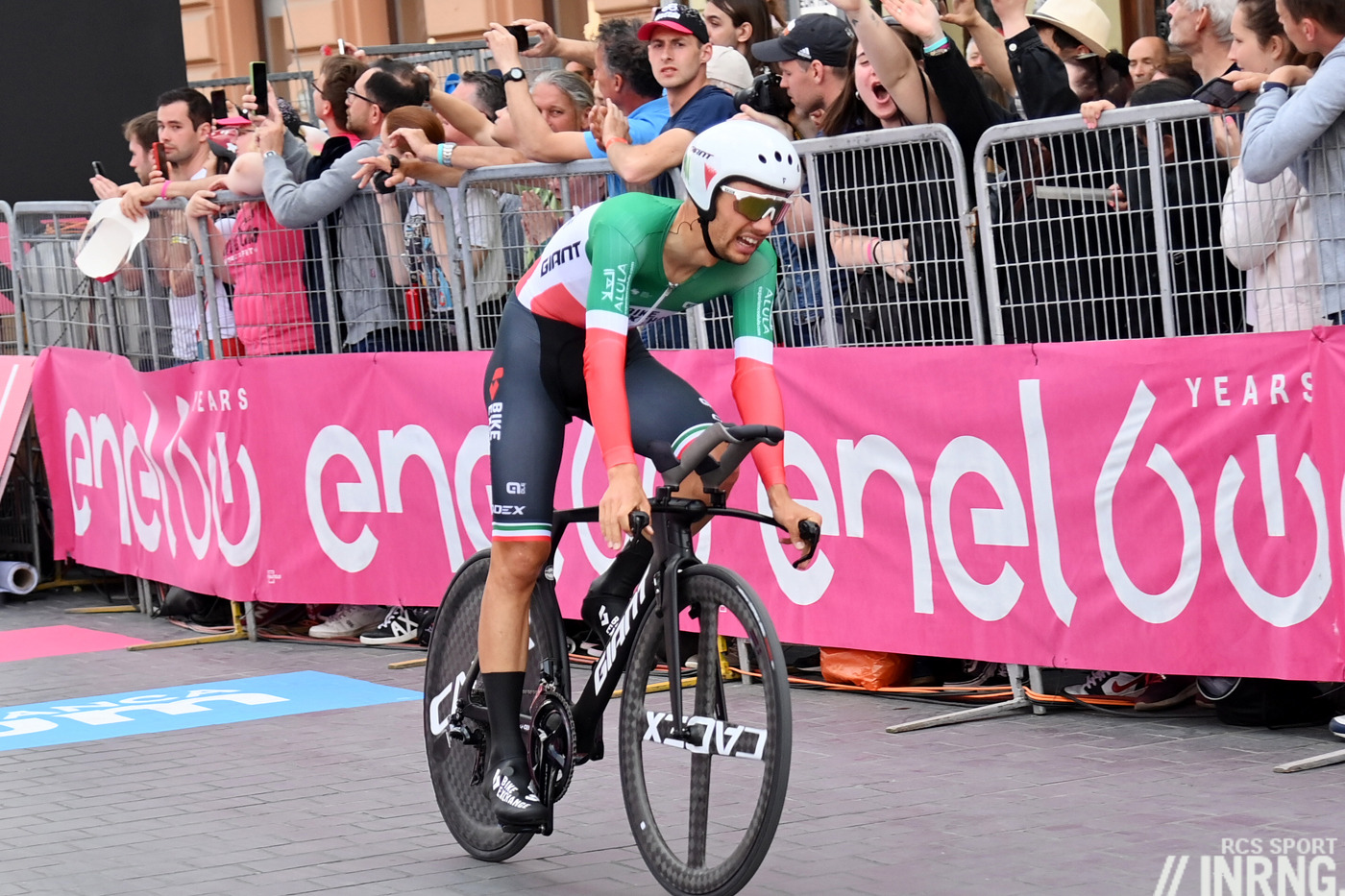 Matteo Sobrero (BikeExchange-Jayco) is the current Italian TT champion, putting time into riders like Affini and Ganna and he’s a versatile rider who is light enough to climb well. Speaking recently to The Cycling Podcast, team manager Matt White said they see him as a project for week-long stage races as well. Team mate Kevin Colleoni is a promising peer too.

So is Samuele Battistella (Astana) although he might find the high mountains too much. He is a talent all the same for other races, both one day and shorter stage races. The “Ironman of Castelfranco Veneto” comes from a family that’s big in industrial ironing and was the U23 world champion from the Yorkshire world championships.

Filippo Zana (Bardiani-CSF) is a climber – and keen equestrian – who’s been a pro since 2020 and rode the Giro last year before finishing third in the Tour de l’Avenir too and he’s been racking up similar results in smaller races, the next test is to see what he can do in bigger races starting with the Giro’s breakaways and mountain stages. 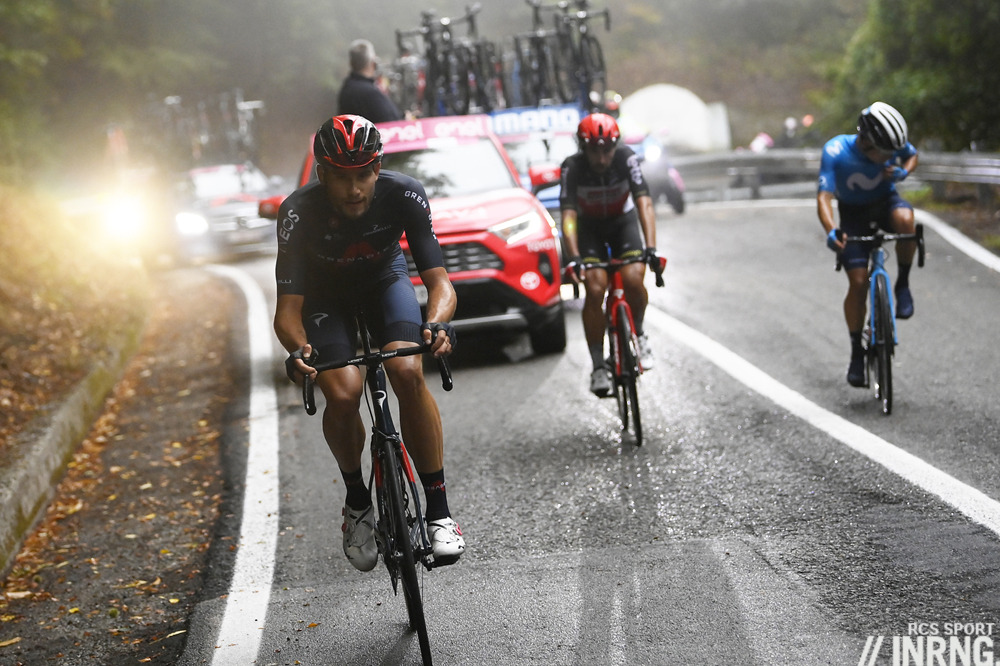 Now what if the most likely winner of the Giro was Filippo Ganna (Ineos)? This would require a radical, even conspiratorial course design. There’s nothing to stop RCS from having 21 time trial stages but more realistically we’re talking a Giro still with mountains stages but fewer of them, plus a prologue and two long time trials where he could put minutes into others. There are many precedents for this, the 2009 Tour de Suisse was flattened to enable Fabian Cancellara to win, Jens Voigt found the Tour of Germany route suited and the Giro itself has seen routes suited to its stars whether Francesco Moser in 1984 but that was a long time ago when TV rights abroad weren’t as valuable as they are today.

Ganna is a star of Italian cycling though and just having him on the startline, winning two time trials and a road stage is plenty to hook in the general public in Italy, especially if the course design allows him to get into the maglia rosa early, defend it valiantly on a mid-mountain stage, reclaim it in a TT before eventually saying addio in the Alps. Plus for Ganna it’s arguably better to occupy a niche as the world’s best time triallist rather than overextend himself. But for all the names cited above, perhaps he’s the one who could win the Giro? You can toy with the course for all the other names and they’re unlikely to triumph in the near future. 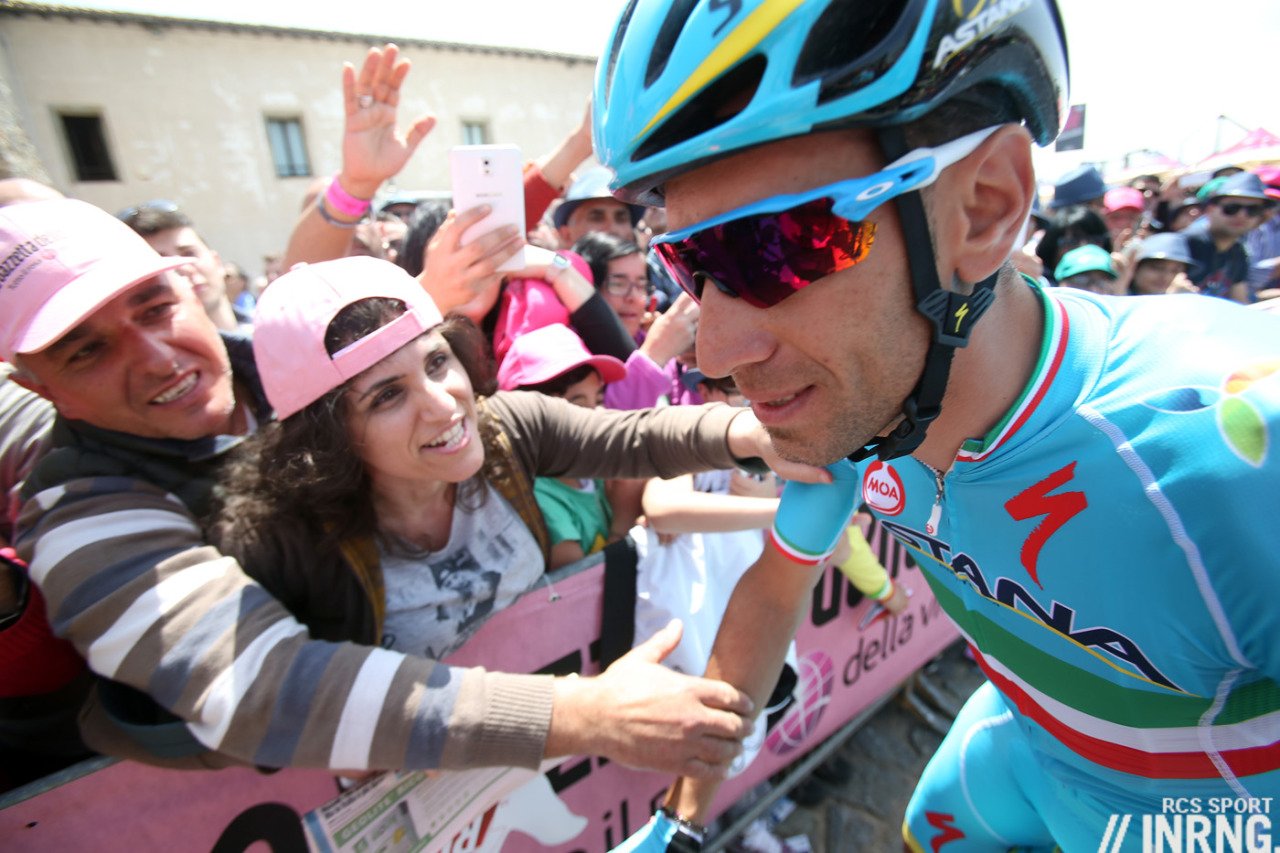 All told it’s a big ask to find someone capable of filling Vincenzo Nibali’s Sidis. There’s no automatic pass for an Italian to thrive in their home race, the sport is more international than ever and being a local contender doesn’t make anyone pedal faster, pressure and expectation can build into a burden but local heroes do help bring out the crowds.

Structurally hosting the Giro is an advantage for Italian cycling and if there’s no obvious candidate today, there could be soon. There’s a reason Juan Ayuso went to race in Italy before turning pro, or why the British and Australian U23 road teams have bases in Italy and it’s neither the weather nor the food: Italy’s got a dense network of clubs, amateur teams and a thriving U23 scene with a variety of races.