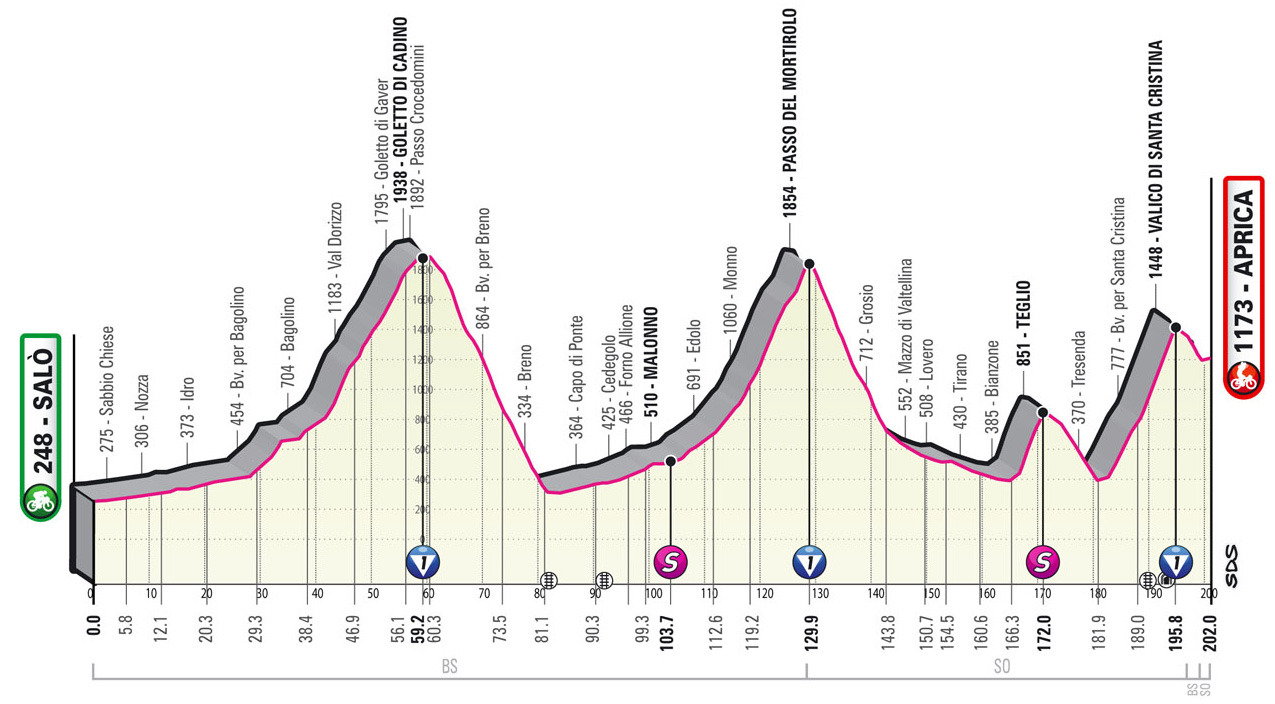 The big Alpine stage of the Giro. Coming after a relatively subdued stage on Sunday and a rest day we’ll see who has the freshest legs to make the moves today.

The Route: 202km and if today isn’t the longest stage when measured by distance, it will be in terms of time, helped by the 5,440m of vertical gain. The stage begins with the best part of 40km to Bagolino where the road drags up. The comes the first climb, the Passo di Crocedomini. 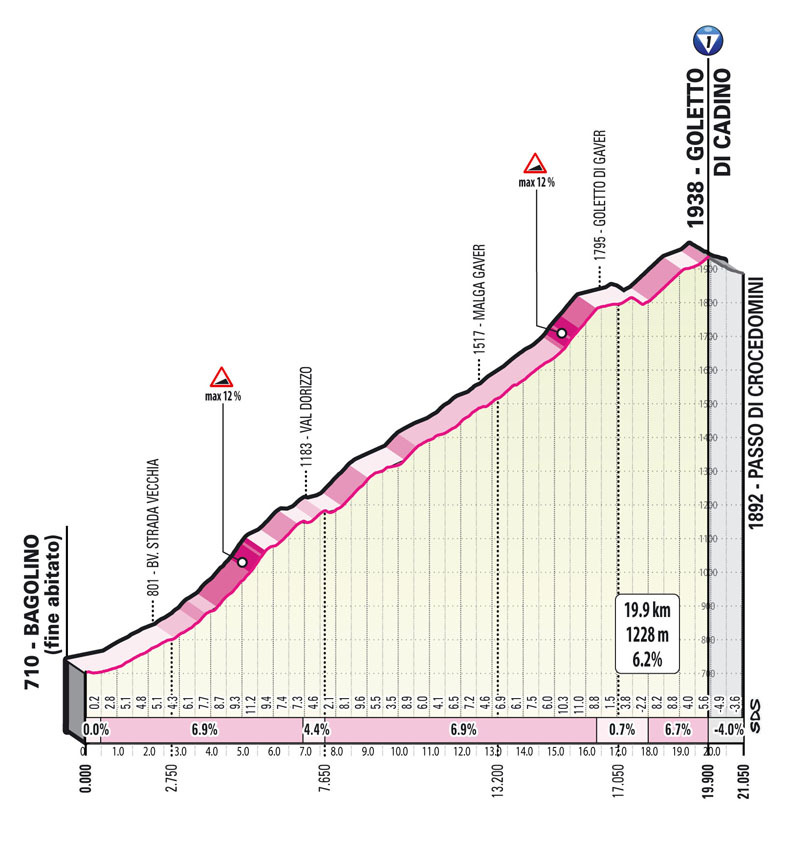 At first a big wide road but narrower and narrower but always well-kept, it’s a scenic and unheralded climb and followed by a straightforward and fast descent at first that gets trickier closer to the valley floor. Then comes almost 30km of riding up the valley road. 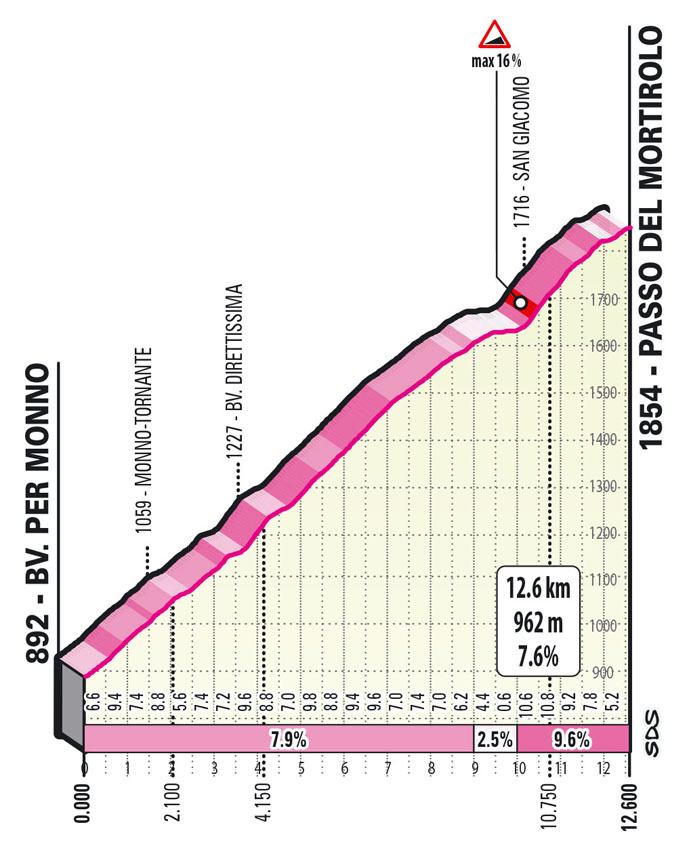 Sure the Mortirolo is climbed via the easier side from Nonno on the eeast but it’s still hard, plenty of 8% here and one of the characteristics of this climb is its irregularity, it’s hard to get into a rhythm. Once out into the pastures by the village of San Giacomo the road rears up with the hardest part across the pass. If they’ve gone up the “easier” side, they have to go down the steeper side and if they avoid the most difficult way down it’s still difficult with the gradient and numerous bends. Then comes 20km of valley roads. 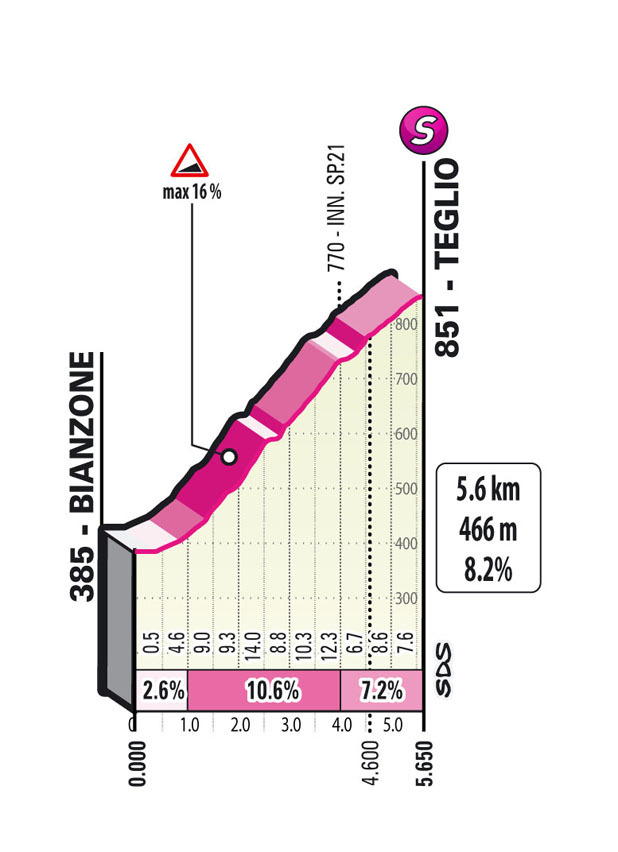 The road to Teglio is marked as a sprint but it’s a tough climb to get there, much of it over 10% on a side road that goes up the side of the valley through the vineyards to celebrate today’s “wine stage” theme. 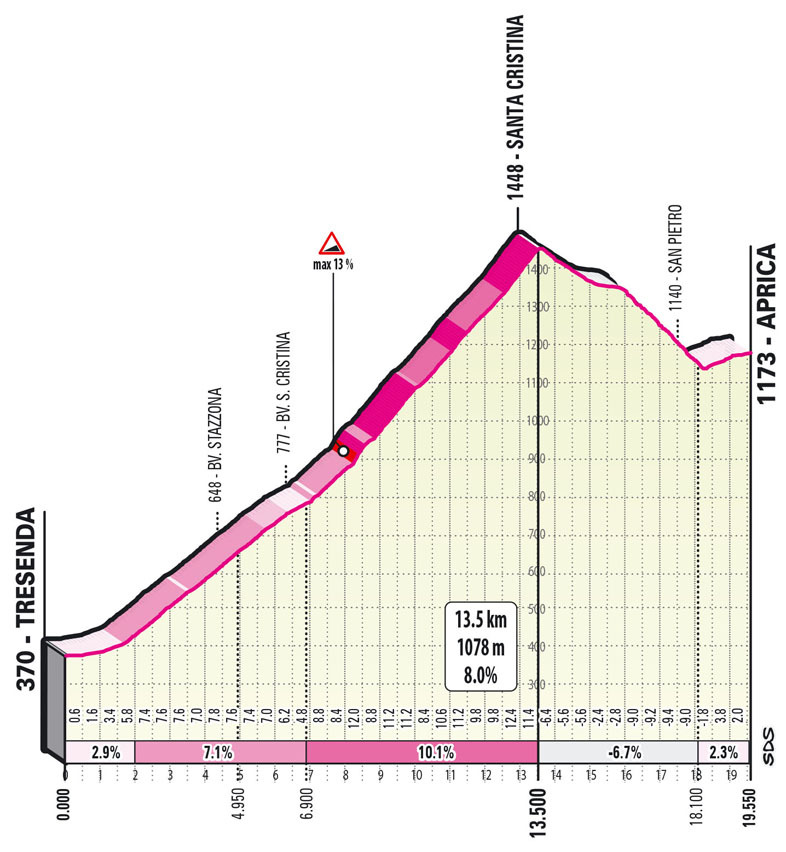 The Finish: the final climb of the Passo di Santa Cristina almost always above 10% for the second half and just a hard climb, a backroad rather than a ski station approach.

The descent is different, it has its moments but is more gentle than the previous climb, one hard aspect is the woodland makes it hard to see where the road goes. It finishes with a flurry of hairpins and with 3km to go the race picks up the valley road straight into Aprica and it rises at about 3% to the line for the last kilometre. 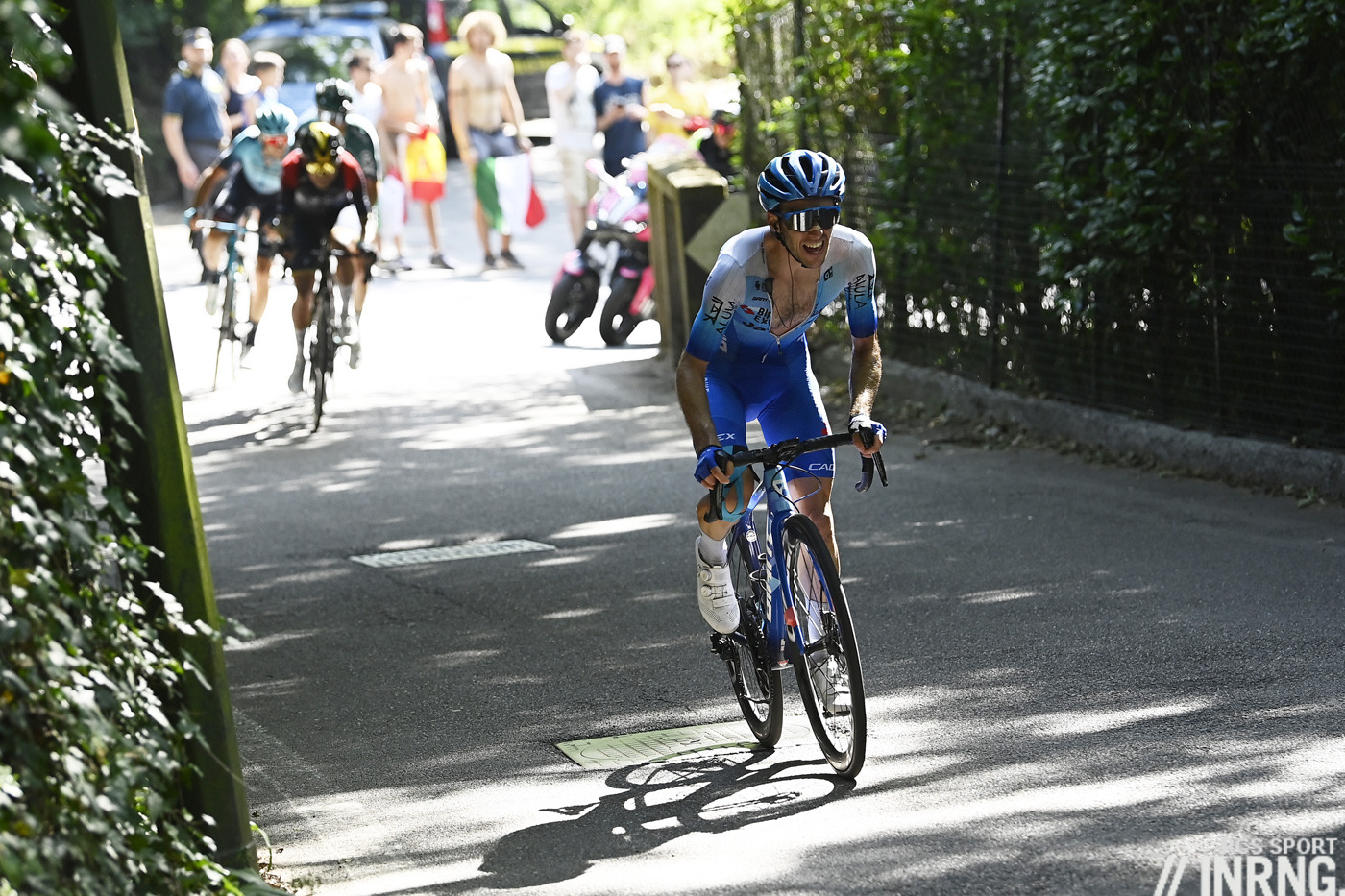 The Contenders: a breakaway to take the stage or the GC contenders? The breakaway has a great chance today, assuming it can form in time as the paradox is the more riders think the break has a chance, the more will try to get into it and the longer it can take to form and this means there’s less time to get away and build up a lead. Still Ineos is out to pace Richard Carapaz into place on the final climb rather than shred the stage, ditto Bora-hansgrohe for Jai Hindley but the former looks more likely to try and attack and go clear for time over the top. If there’s no breakaway up the road it’s hard to pick the fastest in a sprint because after six hours, it’s more down to freshness. Pello Bilbao (Bahrain) is quick but will be there among the GC riders after the Passo di Santa Cristina?

Simon Yates (BikeExchange-Jayco) can have a foot in both camps, he can go in the breakaway or try to hang with the GC contenders and then use the Passo di Santa Cristina to attack and go clear for the win. From the breakaway he can hope to simply outclimb everyone, if he’s with the GC contenders it’s harder as he’ll have to outride any mountain trains and pick his moment to get a gap. His presence makes it a touch harder to pick the likes of Joe Dombrowski (Astana), Wout Poels (Bahrain) or Bauke Mollema (Trek-Segafredo). Giulio Ciccone (Trek-Segafredo) is bound to be more confident and have an eye on the mountains prize but one stage is a good haul, back-to-back wins much harder. Hugh Carthy (EF) came close then and will like today’s longer climbs.

Mountain leader Koen Bouwman (Jumbo-Visma) had some back pain of late thanks to swapping bikes apparently but if he’s over that he’ll be worth watching along with team mates Foss and Oomen.

Weather: mainly cloudy and 20°C in the valleys,  11°C at the top of the climbs and chance of rain later in the stage.