For cycling fans Kazakhstan has meant the sky blue jerseys of the Astana cycling team. Now events in Kazakhstan and their repression are front page news and instead of blue jerseys, images of burning buildings and troops on the streets come to mind. The President has instructed security forces to “use lethal force without warning” against protestors and those he has labelled “bandits”. The regime behind these measures is the same one behind the pro cycling team.

Astana have never been an easy team to like. If sport has heroes perhaps it needs villains too? Born out of the collapse of the Liberty Seguros team following the Operation Puerto blood doping scandal, the Astana team was launched in 2007. That same year team founder Alexander Vinokourov was rumbled for blood doping  in Tour de France and the whole team had to leave the race. Yet this wasn’t the ruinous moment it could have been for other teams.

Now the Astana team is in its 17th season. It feels like part of the World Tour furniture yet it’s hard to work out what the team is for. If it was out to get good publicity for the country then that’s questionable given all their doping scandals over the years; perhaps this was just noted by insider cycling fans while positive images of riders winning races went global? If it’s to bring on domestic talent, do they need a full world tour for this when they could do what, say, Nippo does with Japanese riders and acts as a co-sponsor to help place their riders?

At one point even the UCI tried to block the team. But so far, so internal to the team and its management. We need to park this aspect and look beyond because all along they’ve been backed by an authoritarian regime in what looks a lot like a one party state. You could try to ignore this part but it’s got a lot more difficult this week. Especially because the team’s backers are the Kazakh State, it’s not funded by some hobbyist living out a pro cycling fantasy out of their own wealth.

Which brings us to events in Kazakhstan now. A decision to remove price controls on gas used in people’s vehicles led to protests, perhaps was the final straw for many. But there seem to be longer term factors underneath causing concerns and different protests in different places have different grievances, as well as looting and even claims some of the riots in the capital were agitated by conspirators. It’s all hard to tell given the internet has been switched off in the country for most of the week. Now the fate of a pro cycling team doesn’t amount to a hill of beans compared to these issues but since this is a pro cycling blog, we’ll explore it and you can go elsewhere for the bigger picture.

In the wake of the protests the President has reportedly sacked his cabinet but don’t expect big change. This has happened with help from others, Russia apparently has sent 75 flights of troops and supplies and others have provided more help meaning the Kazakh government’s got extra, outside assistance to put down protests, perhaps in case the local police are minded to side with protestors. The authoritarian state stays for now, although these things can be brittle.

Who knows what these internal changes might mean for the cycling team? President Tokayev was Nazarbayev’s handpicked successor and any difference in the direction of travel since his appointment is hard to tell, there’s no clue to what any of this means for the team. Remember even during the apparent good times internal issues behind the scenes in the past have led to reports of unpaid wages in 2018 and again in 2020.

If the Tokayev rule stays this doesn’t mean the team’s future is safe. A pro cycling outfit is low priority for the President compared to burning buildings and suppressing popular uprisings but that’s the point, it’s not a necessity. If money is tight then even the rulers might ask why they’re paying the likes of Vincenzo Nibali and Miguel Angel Lopez lots of Euros to dance on the pedals when locals want more of the spoils. 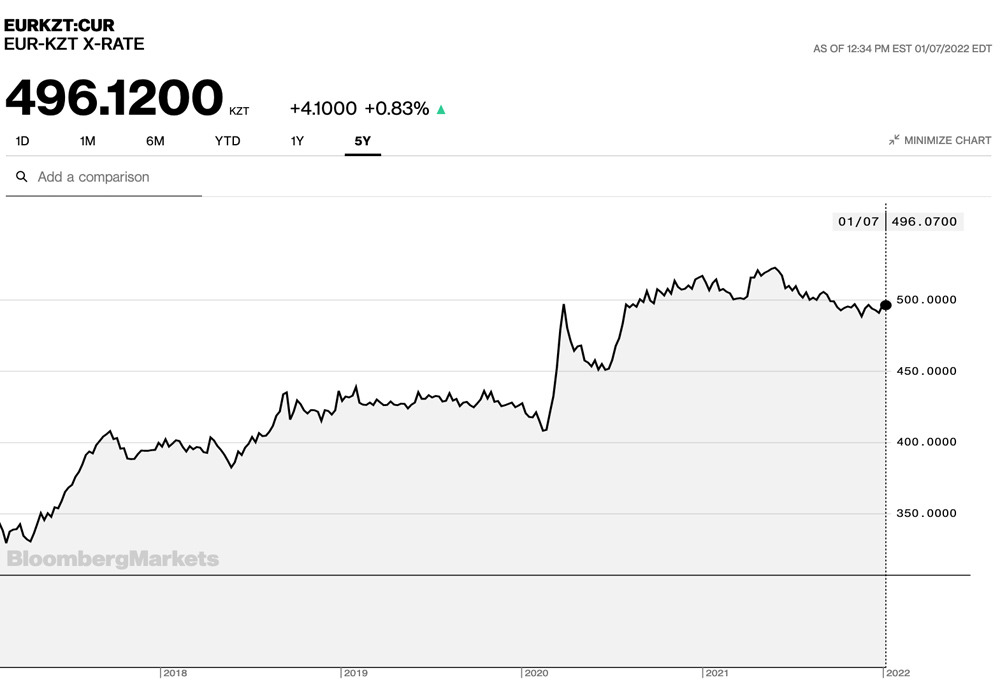 All those issues are internal to the Kazakh regime. But there are outside factors. Even if the funding is still guaranteed one thing to watch here is the exchange rate. As the screengrab from Bloomberg above shows, not long ago you needed about 400 Tenge to buy one Euro, now the rate is around 500. That means funding the Astana team has got 25% more expensive of late. And if the rate slips more in the wake of any turmoil then the team’s wage bill gets pricier still. The US and EU among others could impose sanctions which might have an impact on moving money as well.

More specifically for the team is the question for its co-sponsors: are their values shared with the team’s backers? Especially if the repression continues or worsens. But the team’s subsidiary sponsors like Wilier and Giordana are just that, the team isn’t reliant on them. Last year the team had a co-sponsor in the Canadian horticultural company Premier Tech. The firm might have felt like it got flicked during last summer’s power struggle, now management must be relieved to have got out but it’s had the effect of meaning the team is now dependent on funding from Almaty.

Some say sport and politics don’t mix. This is true for Kazakh tennis players preparing for the Australian open, or Kazakh ski jumpers in the World Cup who are largely doing their thing and probably don’t want to be asked about events back home as there’s no safe answer. The difference for the Astana pro cycling team is that it exists because of the government and it exists for the government. Don’t take my word for it, the squad has been renamed Astana-Qazaqstan and the team says “Qazaqstan is a kind of new brand of the state on the international stage”. The team is a vehicle to promote the state’s image. Swapping Qazaqstan for Kazakhstan might be the image the government wanted but events now spell something more serious and the team should face questions about what, and who, it is riding for.