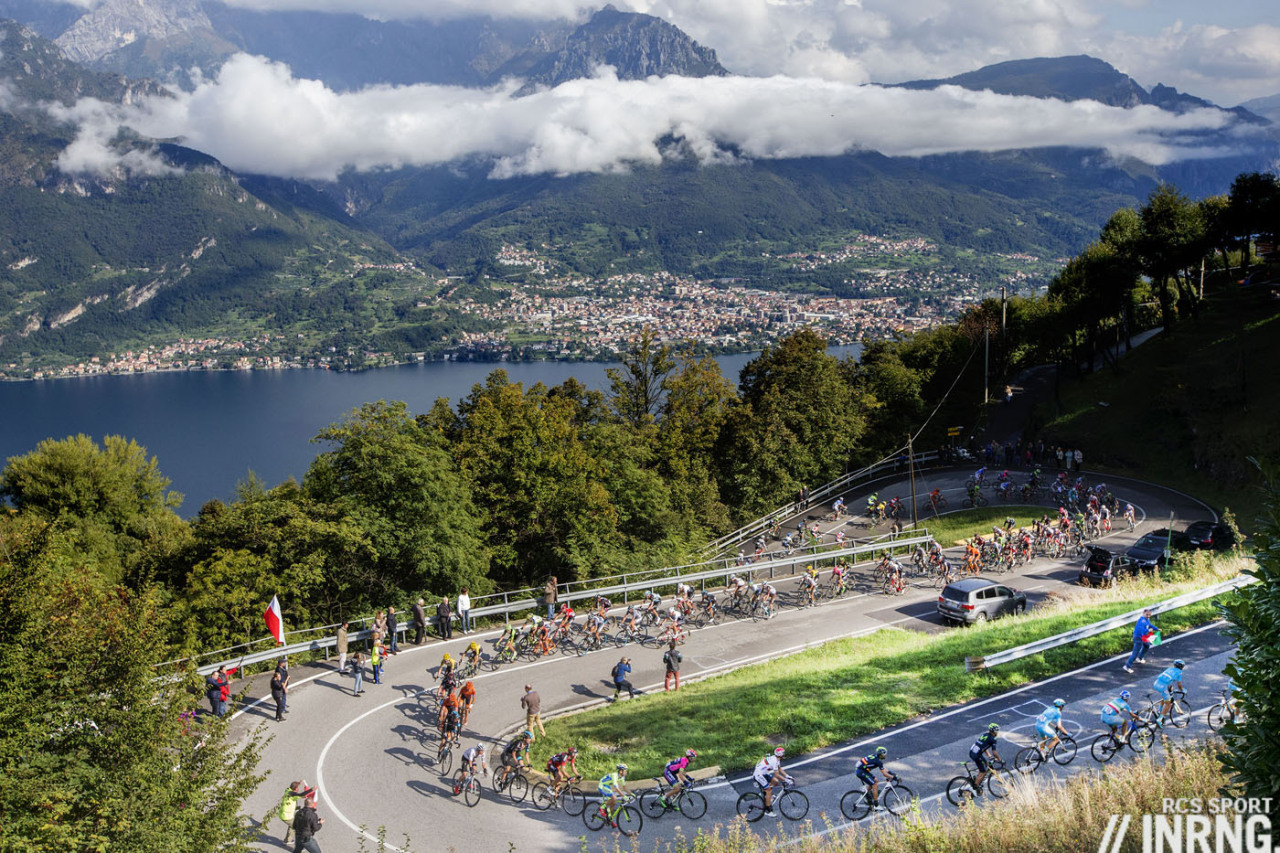 The same but different. The course changes every year but the race remains the same, a long distance test across the plains, valleys and climbs of Lombardia, a scenic race for viewers and a technical challenge for participants with double-digit gradient climbs and numerous twisty descents.

The Route: 239km and over 4,500m of vertical gain. The race keeps switching between Como and Bergamo as start and finishing points and this year it’s from Como to Bergamo. The first climb is to the Madonna del Ghisallo sanctuary only the climb is tackled “backwards” to the usual route, it’s a steep climb followed by more open descent once past the chapel and then along the shores of Lake Como. The climb to Roncola is 9km with a middle 7km at over 8%, it’s selective and should start thinning the field and tiring legs. The next climb to Berbenno is more gentle, almost a big ring climb. The same for the next climb to the Colle di Zambla via Dossena, a long steady climb to sap the legs and chased by a big descent. 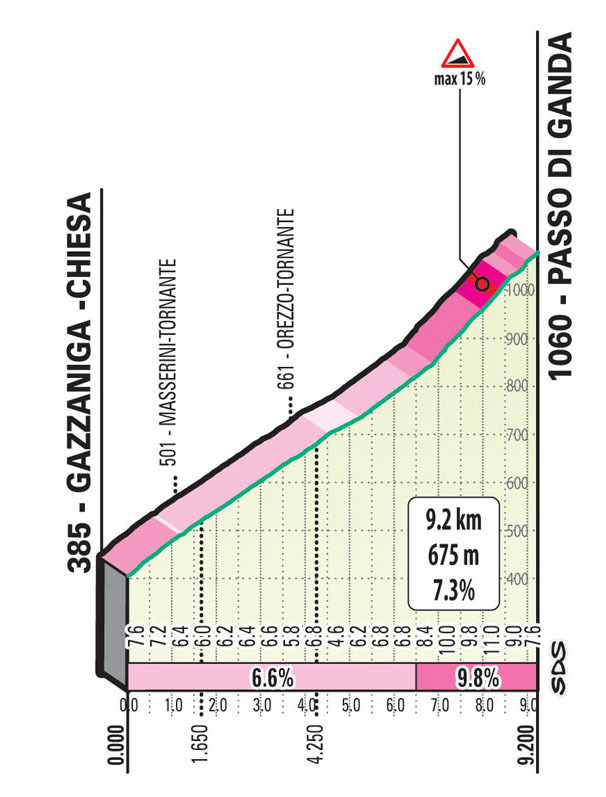 The Passo di Ganda is the crucial point, 9.2 km at 7.3%, maxxing at 15% and crucially the upper slopes are the steepest. This is a wilder climb than the others and the descent is tricky too with many hairpin bends and narrow. Dropped riders will have to take risks and burn up energy to get back. Then comes more than 10km on the flat, a tactical nomansland that could see breaks flounder and riders huddle in anticipation of the final climb above Bergamo. 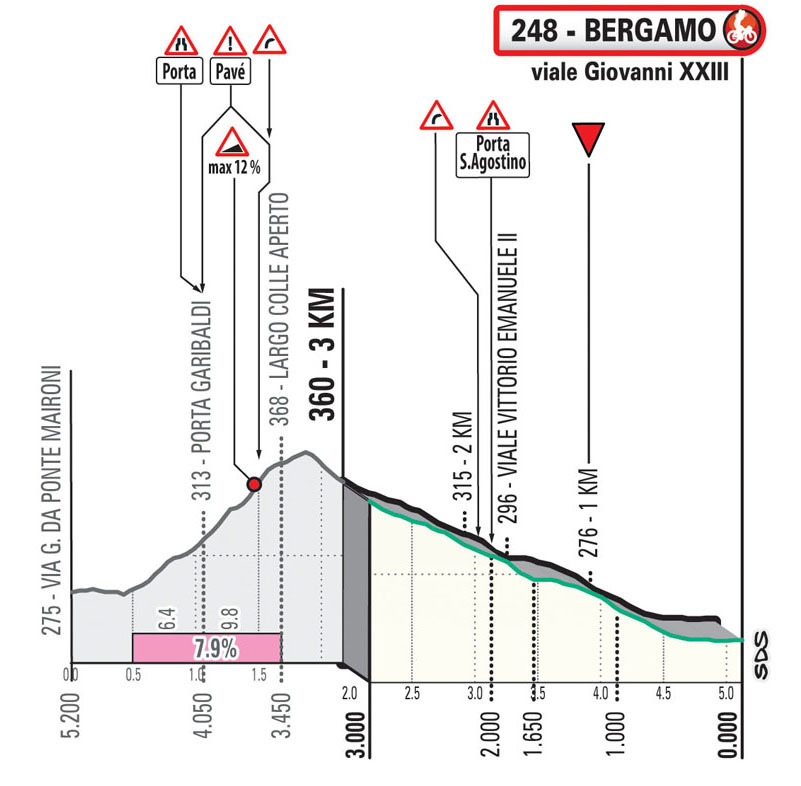 The race reuses the Bergamo Alta route it’s borrowed before. The riders will storm the city riding up narrow cobbled ramps through ancient gates and medieval streets. The profile above doesn’t show the corners nor the cobbles which make the last climb a leg breaker. The descent isn’t symmetrical, it’s on wider roads with large hairpin bends and the road for the finish levels out in the last kilometre with one right hand bend with 250m to go before the line. 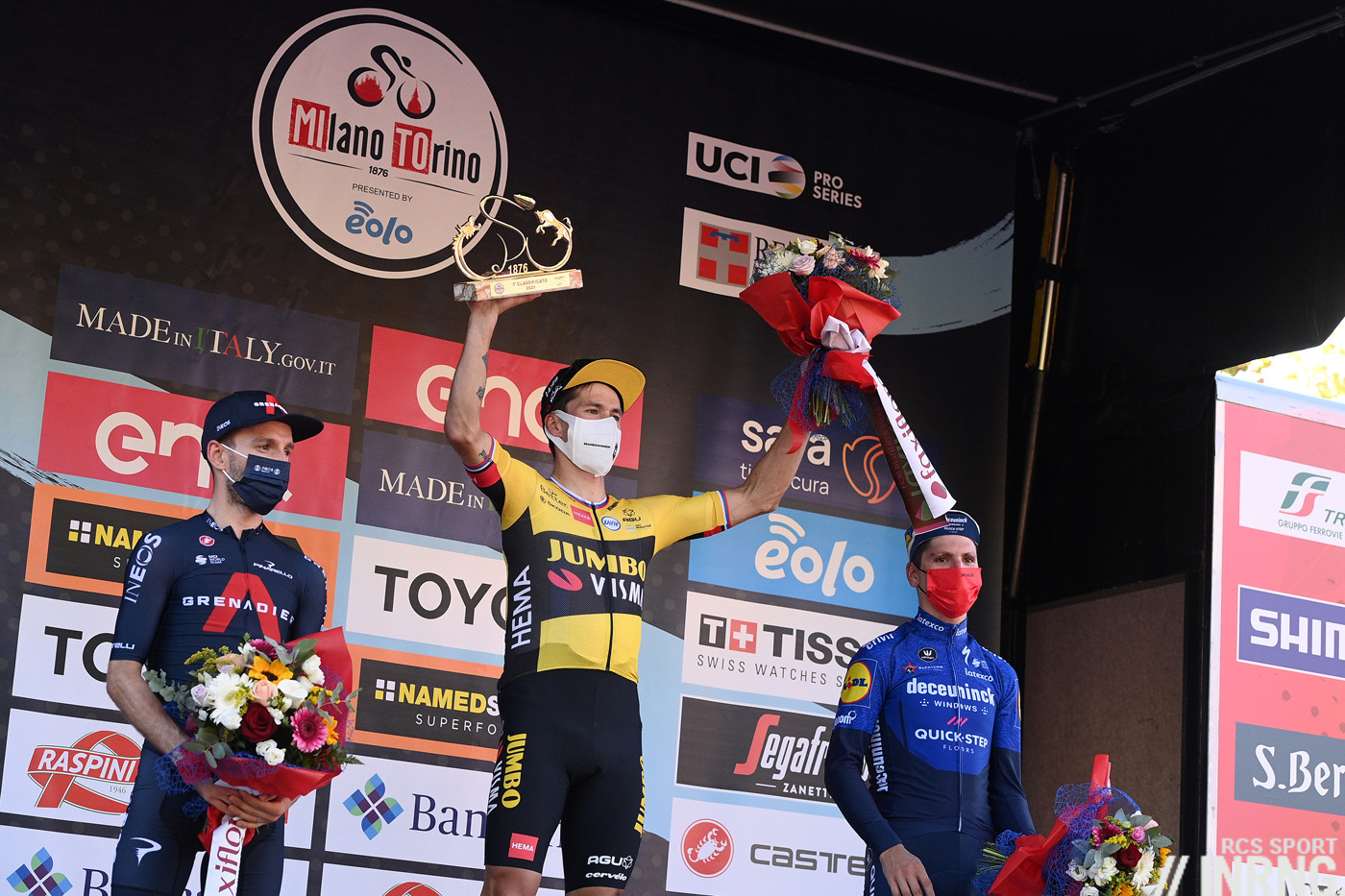 The Contenders: Primož Roglič (Jumbo-Visma) has won his last two races but they each had a hilltop finish and if he’s got a kick like a Thai boxer, here the flat finish is harder for him, does he move on the climb into Bergamo or hope for the best in the sprint? Team mates Steven Kruijswijk and Jonas Vinegaard looked handy in the Giro dell’Emilia too but they could well be deployed to mop up moves from others. 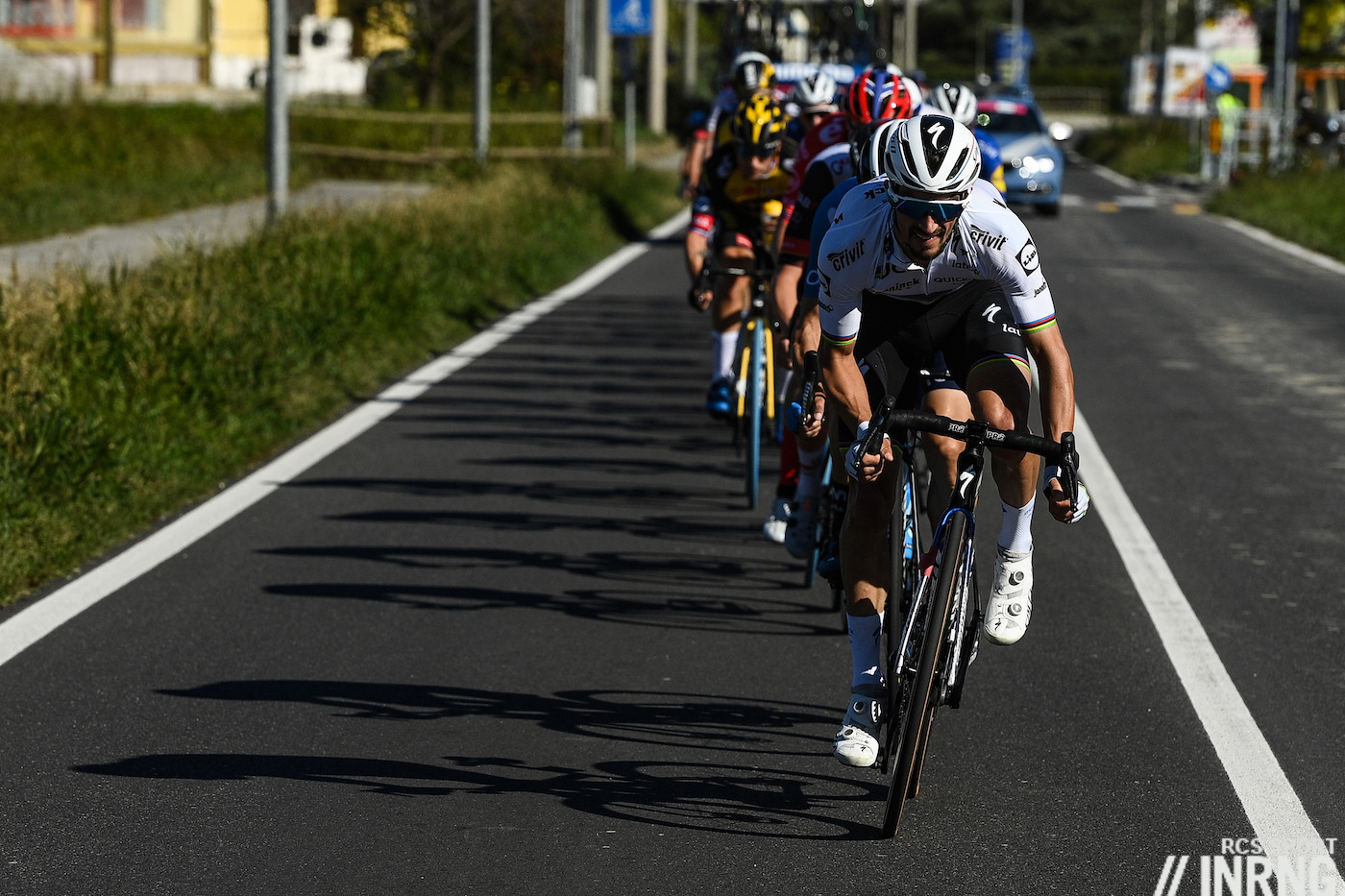 Deceuninck-Quickstep come with three ace cards. Julian Alaphilippe was last seen being dropped on Turin’s Superga climb but if you’re a fan, don’t worry as he’d said the race was for training and had been working to split the group on the plains. Still the test is whether he can cope with 20 minute plus climbs in order to make the front group coming into Bergamo and it’s not obvious. Remco Evenepoel is back to the race where he had that horror crash. He’s got one way of winning and it’s to go solo from afar and if rivals know he’ll do this he’s still irresistible, especially when his team have several cards to play. João Almeida is the third ace, in form and a strong rider but with a less obvious route to victory than his two team mates. Andrea Bagioli and Fausto Masnada are outside contenders but likely to fulfil team roles. 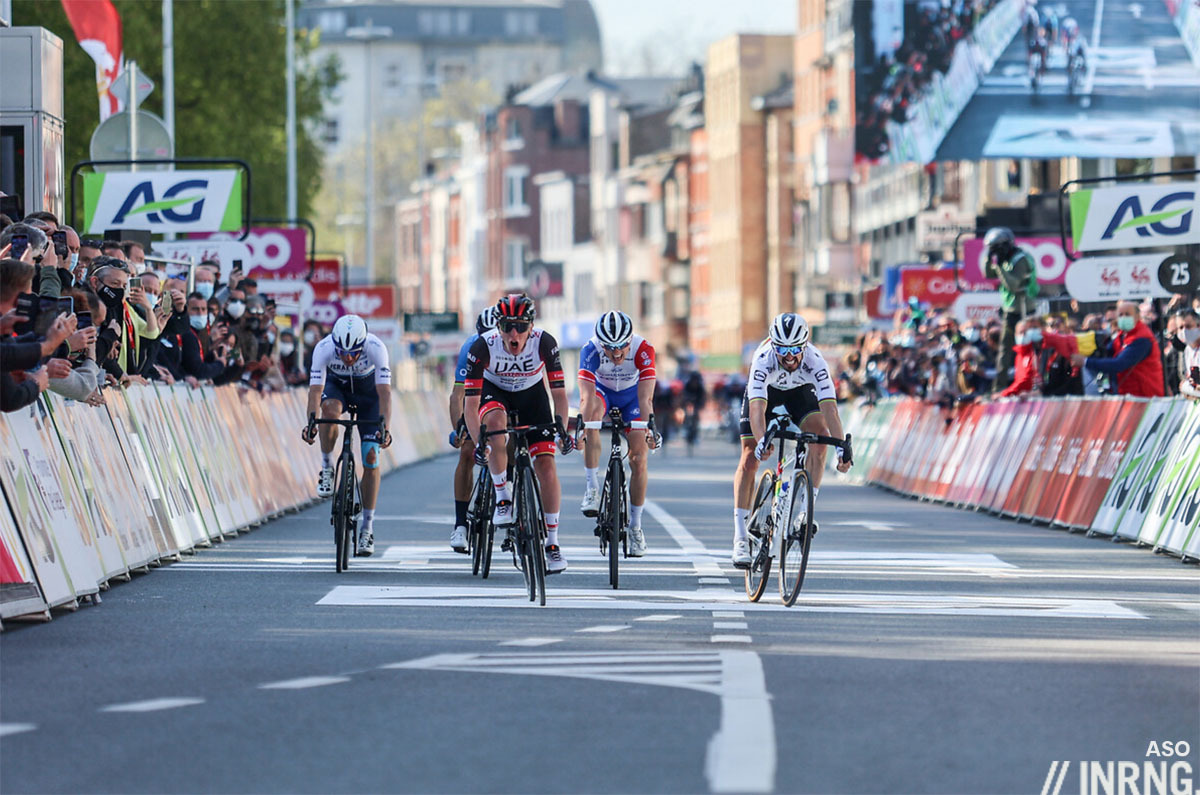 UAE bring another very strong team. Tadej Pogačar has come up a little short in recent races but only just and can probably win at 90% form. Davide Formolo is in form but a rare winner, Diego Ulissi can score more often and from a sprint while Marc Hirschi still looks a touch short of form to save his season. 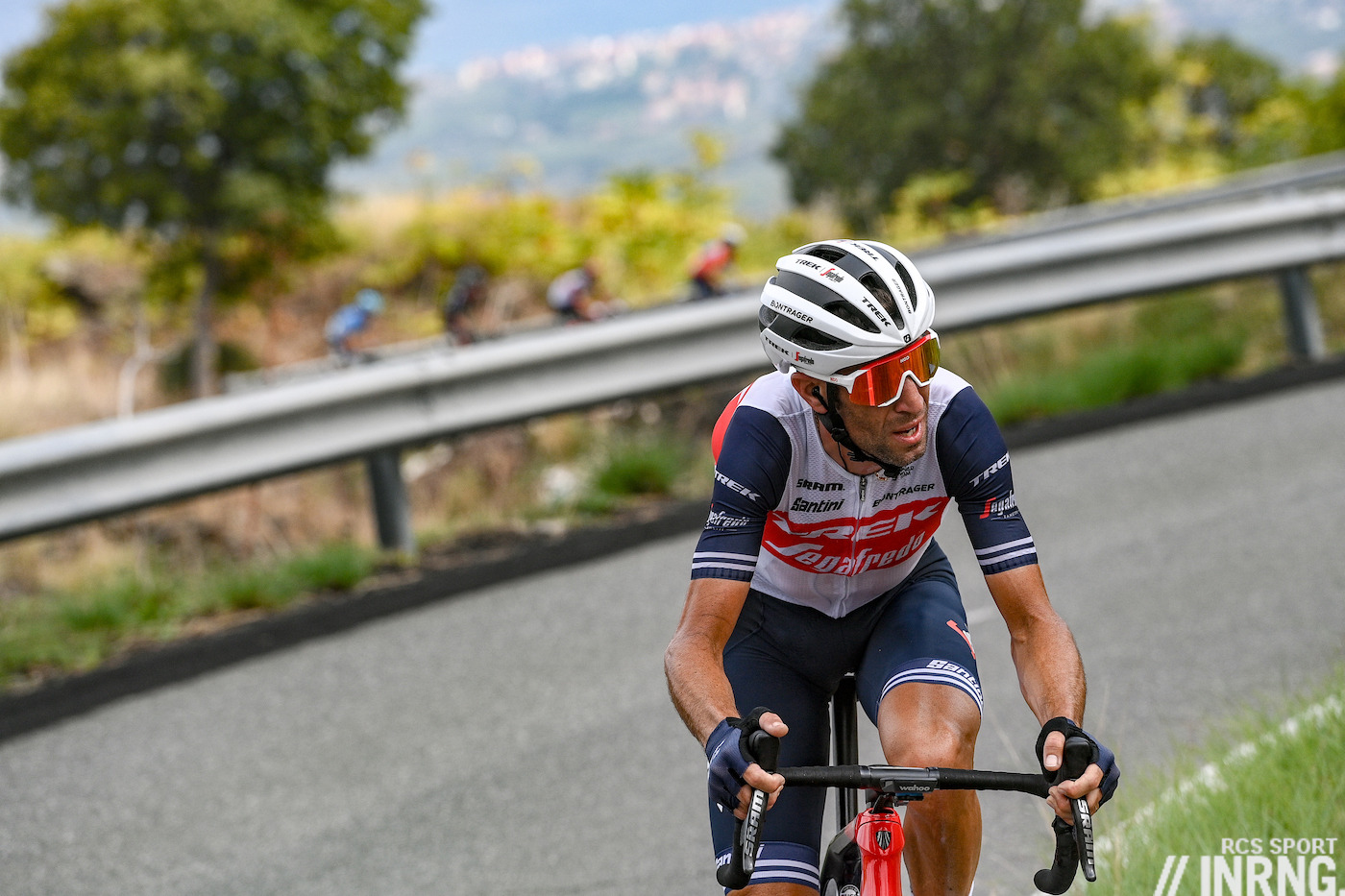 Vincenzo Nibali is enjoying some late season form. He’s just won his home Giro di Sicilia and not by some crafty ambush, instead he dropped the other GC contenders on a long climb and this was something he hasn’t done for some time. 2019 Lombardia winner Bauke Mollema (Trek-Segafredo) is back and could try another mugging on the flat road to Bergamo, the form seems about there. 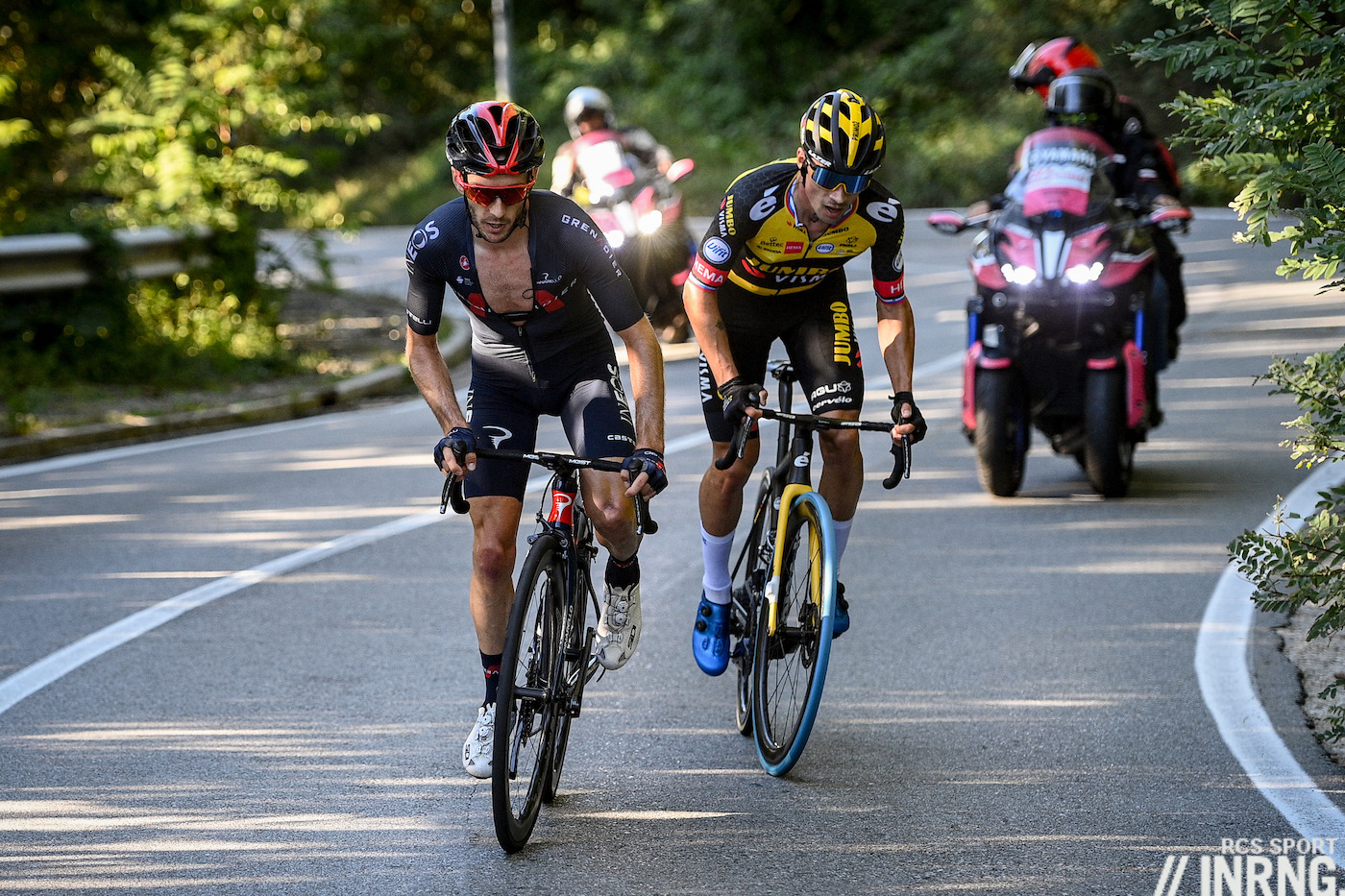 Adam Yates leads Ineos but how to win? He’s not a regular in one day races and in stage races he’s usually winning atop a summit finish but can has the race craft to win a sprint too, if he comes in with a small group he’s got a good chance. Gianni Moscon is versatile, but enough to go from leading Paris-Roubaix to coping with the Passo di Ganda?

A broken collarbone in the Vuelta and then 40 days later Alejandro Valverde (Movistar) won a stage of the Giro di Sicilia. The wins don’t come so easy these days and Lombardia ought to suit but it’s a race he’s never won, three second places make this an elusive race.

EF Education-Nippo have some good outsiders with Rigo Uran, Sergio Higuita and Neilson Powless but imagine you’re the team DS, how to you turn this into a plan to beat the others?

Now for some climbers who’d prefer a hillier finish. Michael Woods (Israel) is a hard pick for a flat sprint but should feature. Ag2r Citroën’s Clément Champoussin has looked good of late. Bora-Hansgrohe’s climber Matteo Fabbro is due a big win. Romain Bardet (DSM) knows this race well and copes well with long distances. David Gaudu is Groupama-FDJ’s leader with Thibaut Pinot in support and unlike the names listed so far Gaudu’s got a handy sprint from a group, it got him on the podium in Liège earlier this season but he’d sign for a podium place again, it’s hard to see how he can win here. Stephen Williams (Bahrain) has just won the Tour of Croatia but unpicking a big one day race is another matter.

Weather: if the leaves are still on the trees for the “race of the falling leaves” it’ll still feel autumnal. Expect cloudy skies, some weak sunshine and a cool 16°C in the valleys.

TV: live from start to finish. The race starts at 10.20am CEST and finishes around 5.00pm CEST. Local coverage on RAI is relayed by Eurosport/GCN in many countries from pm onwards. Tune in early because this is the last time you’ll see a stellar field racing this year and for some time into next year but if you have to ration your viewing, tune in around 3.45pm for the Passo di Ganda and more.