The Super Tuscan stage, 162km with climbs and dirt roads on the way to the finish in Montalcino. This is the Strade Bianche stage but it’s a different race to the spring classic, a hard stage with relatively long climbs to sap energy.

The Route: flat for 45km before some gentle climbing starts, it’s all on big roads for 90km. The first gravel sector has a big wide approach road into the town of Torrenieri which funnels into something narrower before the ride through town. Then it’s onto the first sector, a full 9km serving of sterrato. These dirt tracks are ordinary roads, people live next to them and drive to the shops on them, kids go to school on them by bike, car or bus. But they still have their rough parts and holes and the first section is up over a hill and then down, a high speed section. A mistake here, a puncture there and things can be very expensive.

The second sector is longer and after a descent and flat section past a golf course comes a tough climb complete with hairpin bends. The hardest part is the way it climbs like a staircase, this isn’t a steady climb and all the more harder. Then comes the 3-2-1 second time bonus and the next section looks short but it’s the artisan one, rough and with some steep climbs and more of a backroad feel as it bucks up amid the vineyards. 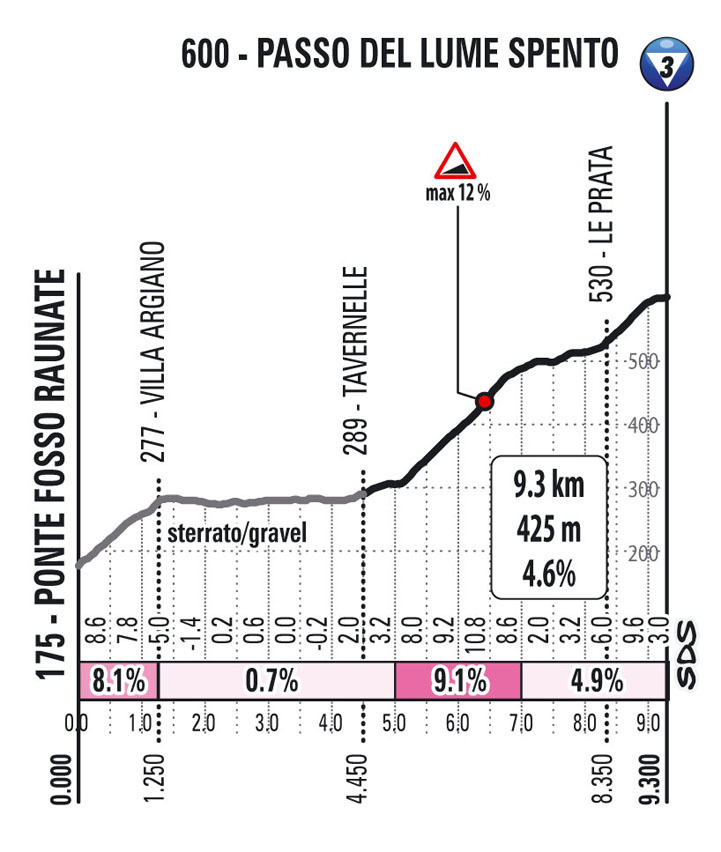 The final section comes after a descent and starts with a right turn and then a hard haul up through the vineyards before emerging back on to the main tarmac road at Tavernelle but the work isn’t done, there’s almost 5km at 7% average, all on an exposed road. 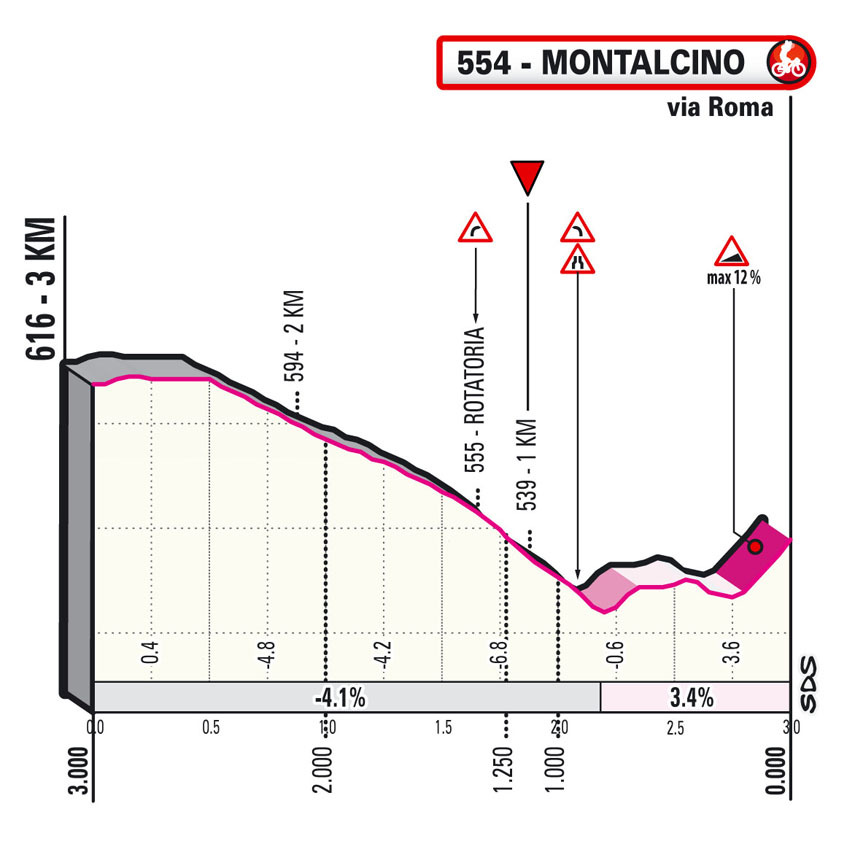 The Finish: downhill into Montalcino and then a run through town across the old flagstones, passing the Eroica finish line and out onto tarmac. There’s a sharp left bend onto a 200m finishing straight that’s uphill at 10% to the line. It’s not Siena’s Strade Bianche finish but getting the final corner right and having something for the final rise to the line still counts. 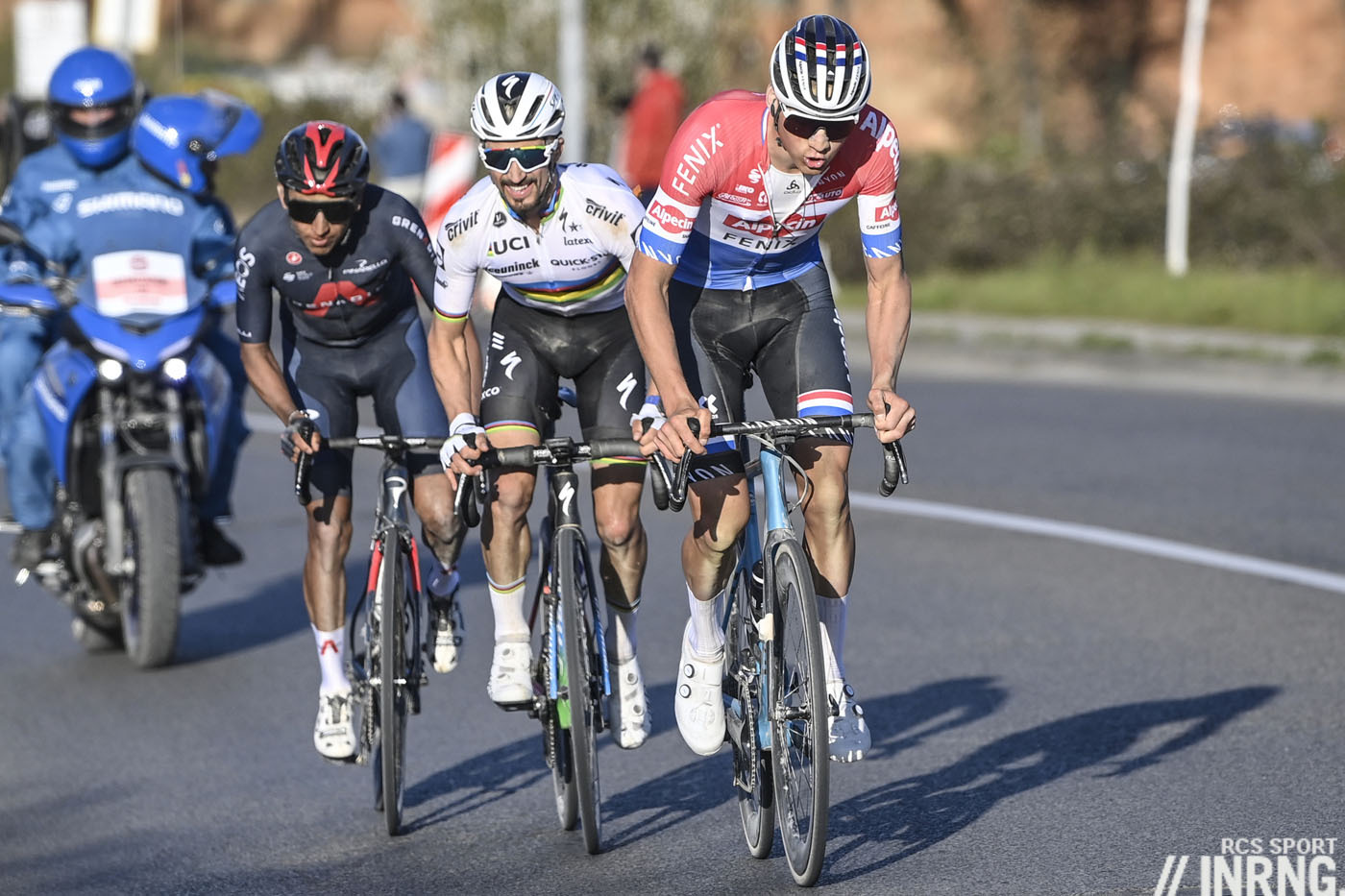 The Contenders: Egan Bernal thrived in the Strade Bianche in March and can do so again here, he’s the form rider and today has longer climbs to suit him even more and the uphill finish helps too compared to a sprint. Team mates Jhonathan Narvaez, Gianni Moscon and Dani Martinez are contenders too but the maglia rosa comes first.

Remco Evenepoel (Deceuninck-Quickstep) gets a big test but could do well here, the known unknown is still the high mountains of the third week, not today’s roads. He too has helpers who could win like Fausto Masnada but they’re being paid to aid the Belgian prodigy.

Giulio Ciccone (Trek-Segafredo) is going well and punchy too for the finish but harder to pick, he could thrive here. Team mate Gianluca Brambilla is an outsider too. Bauke Mollema is still hunting his stage and is always hard to pull back if can get a gap.

Marc Soler (Movistar) is a longer range pick but has all the attributes for a day like today, he’s excellent on shorter climbs and hard stages. He’s 12th overall at the moment so won’t have much freedom to move but doesn’t have be closed down instantly if he attacks late.

Can a break stay away? Not easy with Ineos likely to try and control the race in the latter part and the relative climbing speeds among the GC riders compared to others. Still riders who know they can’t match the GC guys will be keen on a move and the earlier the better in order to establish a lead. So think Alberto Bettiol (EF Education-Nippo) and he’s on home roads too. Diego Ulissi (UAE Emirates) is from the region if not the roads, Davide Formolo’s . It’s hard to know when Thomas De Gendt (Lotto-Soudal) will attack but he’s got the knack of winning big grand tour stages and today is one. Alessandro De Marchi (Israel) could have a go too.

Weather: not much warmer than a March day, 19°C and a mix of sunshine and clouds. It should stay dry but a northerly breeze of 20km/h can play a part, a headwind for the final climb.