Another chance for the sprinters, more so since Caleb Ewan has gone home. It’s all on familiar roads to Foligno, the novelty today could be the wind. 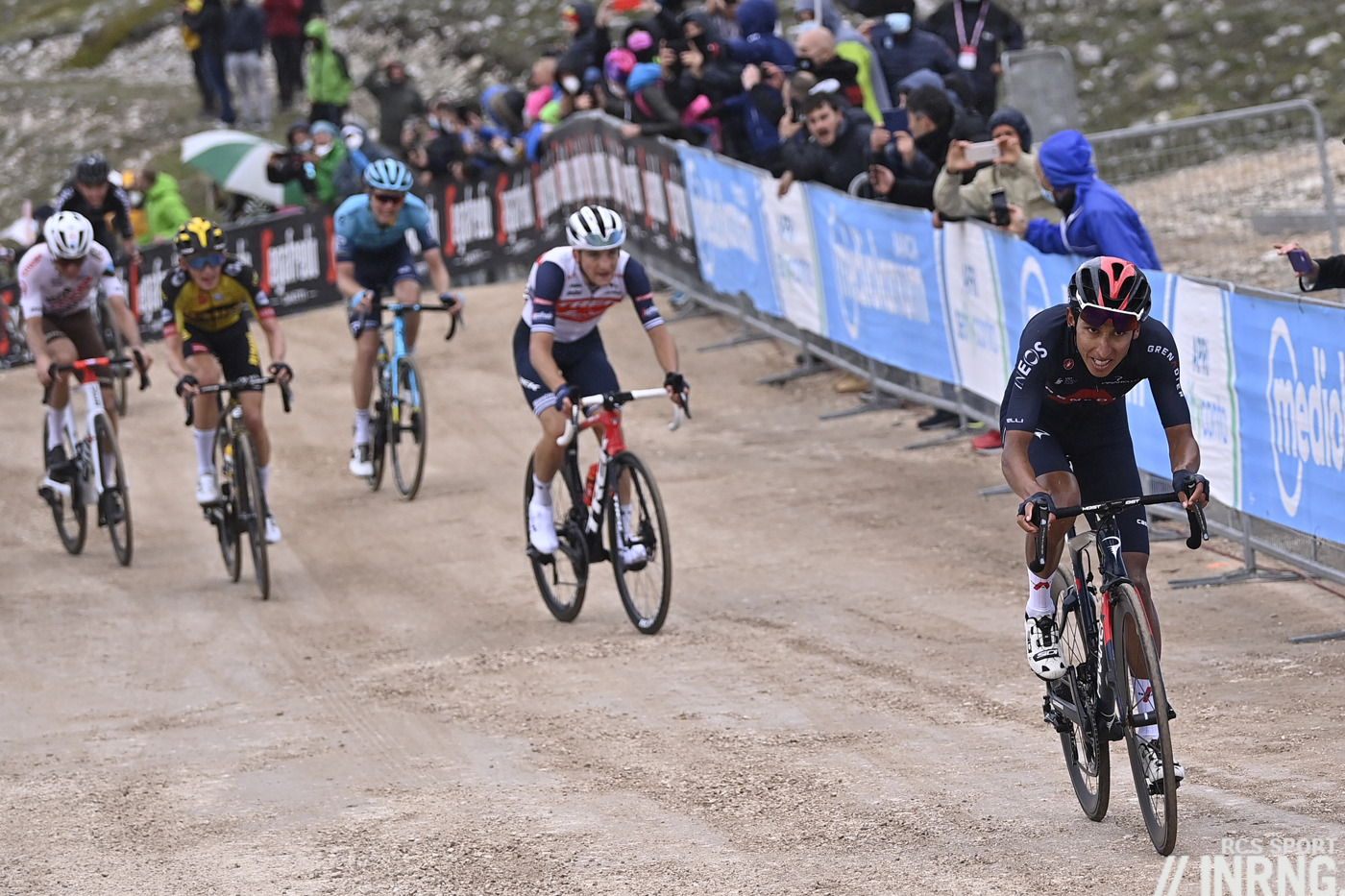 Rocks of change: yesterday’s stage might not make the highlights of the year because it didn’t have the reversals of fortune and more, but it had plenty in the form of relentless energy. We had a wild start to the stage with no move able to go clear, wave after wave of riders attacking when a break finally went away and Ineos and Groupama-FDJ got to the front and started on some energy food, UAE hit them in a bid to get Diego Ulissi up front. Gulf rivals Bahrain also had ideas and were firing riders up the road only for Matej Mohorič to plant his front wheel in a corner on a descent and somersault over the bars. This was no cartoon caper, Mohorič is a demon descender and the accident owned more to the bad state of the road and the tension in the race and the Slovenian was carted away in an ambulance after struggling to stand up following the impact. All along Geoffroy Bouchard was up front, sometimes solo, and because of this now leads the mountains competition. He was disconsolate when he and Koen Bouwman were caught in the final metres of the rocky dirt track by the GC contenders with Egan Bernal sprinting past to take the stage win, the race lead and most importantly big morale boost because when he stands on the pedals there’s nothing the others can do about it. Remco Evenepoel looked to be in trouble on the gravel ski slope but this was down to positioning earlier and a touch of wheels and he had a fast finish to limit his losses.

Egan Bernal took a handful of seconds on his main rivals, plus the 10 second time bonus. He leads Remco Evenepoel and Aleksandr Vlasov by 15 and 21 seconds now which is not much, if the final time trial was tomorrow then both the Belgian and the Russian would overhaul him. But there’s still two weeks of racing left including Wednesday’s gravel lottery and the Alps. So it’s advantage Bernal who is taking time on the terrain others might have hoped to take time on him. It’s still possible to gift the maglia rosa to another team in theory but in practice, which counts for a lot more, Ineos are the strongest team and can manage. Put simply if anyone else wants to win the Giro they need to take on Ineos and Bernal and good luck with that.

The Route: a short stage, just 139km. With a climb at the start and a mountain pass later on, today’s stage gives breakaways some hope but not much more, there’s only one mountain point. There’s an air of déjà vu too with the route copying most of 2016’s Stage 7. The Valico della Somma is a big climb on a main traffic artery, the Via Flaminia and the difficulty today could be the wind more than the slope, there’s a crosswind and a team that accelerates could cause trouble but at the risk of burning up riders they need in the finish.

The Finish: the same as 2016 which was the same as 2014. There’s a flat run into town. It’s not got anything wild and takes place on modern, wide roads but there are several bends with pinch-points from street furniture. A wide U-turn at 500m and the roadbook lists a bend and then just a 160m finishing straight but there’s no sharp corner, just a sweeping road.

The Contenders: who to choose in the absence of Caleb Ewan, the go-to pick? Tim Merlier (Alpecin-Fenix) and Fernando Gaviria (UAE Emirates) both look good but we’ll see if Gaviria is still sore after his crash on Saturday and Merlier’s got a solid train which helps for today’s finish around Foligno. Dylan Groenewegen (Jumbo-Visma) is back, but still on his way back to the form of old, meanwhile Elia Viviani (Cofidis) and Giacomo Nizzolo (Qhubeka-Assos) are in search of a lucky break and that elusive win.

Weather: the weather’s warming up, it’ll be sunny and 24°C. Crucially there’s a 3/4 tailwind of 30km/h which could be enough to split things up if it materialises and is sustained.

TV: the finish is forecast for 5.15pm CEST. As a sprint stage this isn’t required viewing from start to finish but watch out if it’s windy and enjoy because the emptiness of a rest day awaits tomorrow.