The Ronde van Vlaanderen is more than a bike race in Belgium, and this year it marks the end of cobbled classics season given Paris-Roubaix’s postponement. It’s all or nothing this Sunday.

The Route: the same as recent editions at255km this year. It’s not a full tour of Flanders, since the race starts in Antwerp and then makes a beeline for the town of Oudenaarde before 100km are covered. From here the race starts looping around a small part of the Flemish Ardennes. Viewed on a map, the route resembles a ball of wool and includes a large finishing circuit.

The Koppenberg (45km to go): “discovered” in 1976 when a local informed race organisers about a narrow cobbled climb with a 22% gradient and rough cobbles. It can often still be damp on a dry day. Dropped for being too dangerous in the 1987 race, it has made a comeback and is featured late in the race. It’s probably the hardest climb of the day, and if it doesn’t pick the winner, it thins the field. Look to see who emerges over the top and how smooth they look on the way up while behind many will wear down the infamous stones with their cleats, with countless images from the past show riders running up because they could not ride.

Oude Kwaremont (150km, 57km and 18km to go): the odd one out as it’s not short, it’s not steep and it’s not all cobbled. Instead it’s 2.2km long and a meagre 4.2% average; it touches 11% midway. If 2.2km doesn’t sound like much, it’s an effort of more than five minutes of which four are spent on the pavé, making it a tiring boneshaker.

Paterberg (54km to go, 14km to go): the Kwaremont is chased by the Paterberg, where it’s only 400m long but is short, steep and very cobbled. It’s not a normal road, and it was inspired by a local farmer who suggested laying cobbles on what was a farm track in a bid to lure the race. It worked, and has been a VIP village of late, a privatised space but this year it’ll be empty again as people are kept away. The 20% slope has broken many a rider with 240km in their legs.

The Finish: 14km from the Paterberg and after the descent, the last section from Kerkhove to Oudenaarde is eight kilometres long on a flat wide road all the way to the line. It’s featureless and can allow a group to mow down any escapees with a small advantage.

The Contenders: Mathieu van der Poel won the Ronde late last year. His spring classics campaign this season is just a podium in the E3 Prize, after a strong ride in Tirreno which in his own words meant he’s needed extra rest ever since. His presence seems to shape events, and he’ll attack from afar, but partly because he has to, as his Alpecin-Fenix team is good but they’ve got no Plan B for the final hour of the race. With MvdP, there’s a sense of all or nothing, and he hasn’t come to collect ranking points and the sport is all the better for it. Which might explain the quiet Dwars Door Vlaanderen, where a lot of riders avoided going too deep on Wednesday.

Second last year, Wout van Aert is a safer pick. He has more ways of being able to win and is a touch more calculating in a race. He can go solo, he can win from the sprint, but he can also deploy his team at times even if Jumbo-Visma are weaker than they planned to be, given their injuries and more. He landed Gent-Wevelgem last Sunday, but would surely swap it for the win today.

As thousands of Flemish residents will tell you, “cycling is a team sport, jonge” and so now onto not one rider, but the squad of Deceuninck-Quickstep with Julian Alaphilippe as a figurehead. However, his form seems to have come off a bit and even if he can show up at 100%, how to beat the two “vans” above? The answer is the old Quickstep move of firing riders up to the road and of numerical superiority, so that once a selection is a made, rival team leaders are scared to chase down a move for fear of using up their own forces. So here we can see Kasper Asgreen, Yves Lampaert and Florian Sénéchal in the mix with the first two probably wanting to go solo while the latter might count on his sprint. 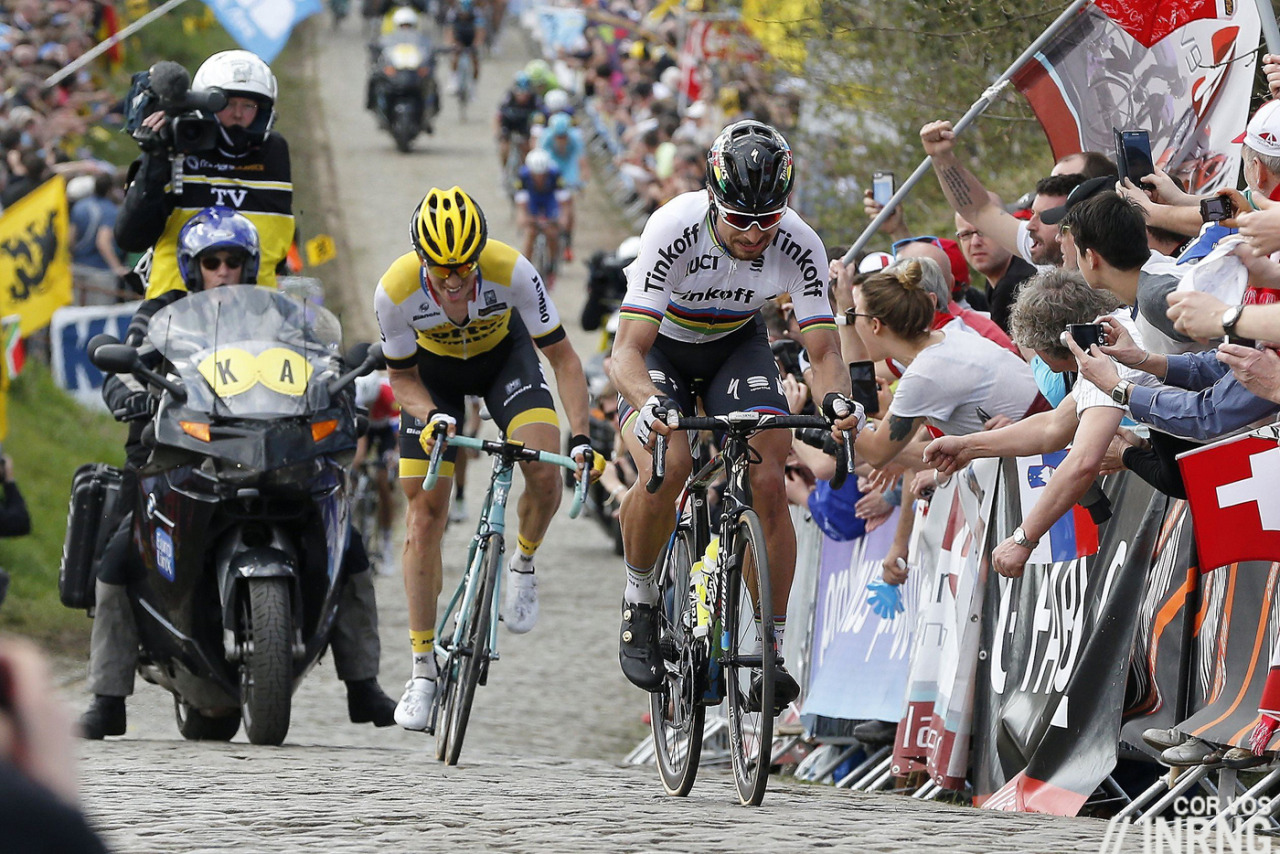 Remember Peter Sagan? Normally a top pick in recent years, he’s not exactly under the radar right now but his profile is lower than it’s been for 10 years. That might just suit him perfectly although once the race is underway, nobody will give him much room. Form is still a mystery; yes, he won in Catalonia, but it’s another matter to spend hours in the wind, and he’s tried many times in his peak years and only triumphed here once. 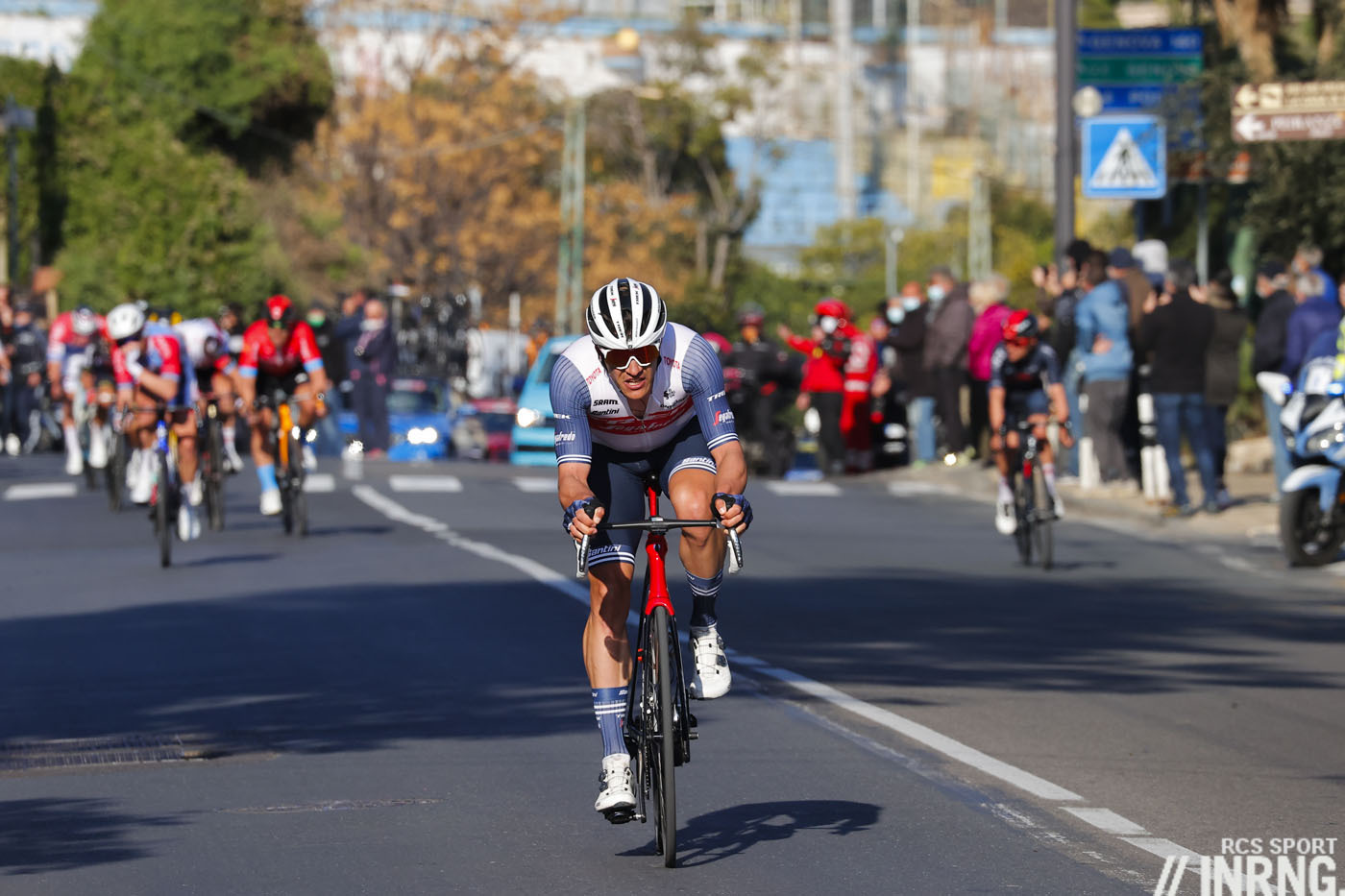 Trek-Segafredo has two strong cards to play in Jasper Stuyven and Mads Pedersen, but how to use them? Both are strong in a sprint but are either confident enough to take on the names above in a sprint? So like Sanremo, using the element of surprise might work well.

A similar story chez Agr Citroën who two top riders with Oliver Naesen and Greg Van Avermaet but despite being very visible in the final hour of the classics, have nothing to show in the trophy cabinet – not even some wilting flowers from a podium place in a semi-classic, but at least they’ve been around when several other teams have been hard to spot at all.

Next comes a long tail of potential contenders. Play word association with Sep Vanmarcke and replies might include “unlucky”, because it often seems if it wasn’t for bad luck, he wouldn’t have any luck at all, but on his day he’s among the very best on the cobbles. Dylan van Baarle with Tom Pidcock as a wildcard for Ineos, where the Dutchman’s a regular in the top-10 here but unlikely to get much room for another solo breakaway like last Wednesday. Michael Matthews and Luke Durbridge make for a textbook tandem tag team as one can sprint and the other can go solo. EF Education-Nippo bring Alberto Bettiol and Michael Valgren, but few results so far between them, where the Italian’s struggled with Covid-19. DSM, which has options with Tiesj Benoot, Søren Kragh Andersen and Nils Eekhoff, but need to exploit riskier situations, to send talent up the road early rather than count on going up the Kwaremont for the last time and overpowering everyone else. Lotto-Soudal are locals, but as said before here several times, have really struggled to win cobbled classics over the years, so Tim Wellens or John Degenkolb would be a big surprise. Less surprising is a bunch sprints of sorts, though it sounds unlikely, but has been threatening to happen over the years and Alexander Kristoff (UAE Emirates) has won the sprint behind the leaders several times now and got on the podium twice in the last two years because of this. Anthony Turgis keeps racking up top-10s for Total Direct Energie, but winning is quite another thing, yet still, he’s even been working on his sprint and the longer the race, the better he does and he was fourth here last year. By contrast, Christophe Laporte (Cofidis) looked great in Dwars Door Vlaanderen but has a tendency to fade in races longer than four hours.

TV: live from start to finish on Een/Sporza and RTBF for locals and VPN users, otherwise on Eurosport/GCN for most of the rest of the world. The race starts at 10.15am CEST and the finish is around 4.40pm CEST.

Then after there’s the women’s race and there’s a good preview over at procyclinguk.com

Next post: The Moment The Ronde Van Vlaanderen Was Won