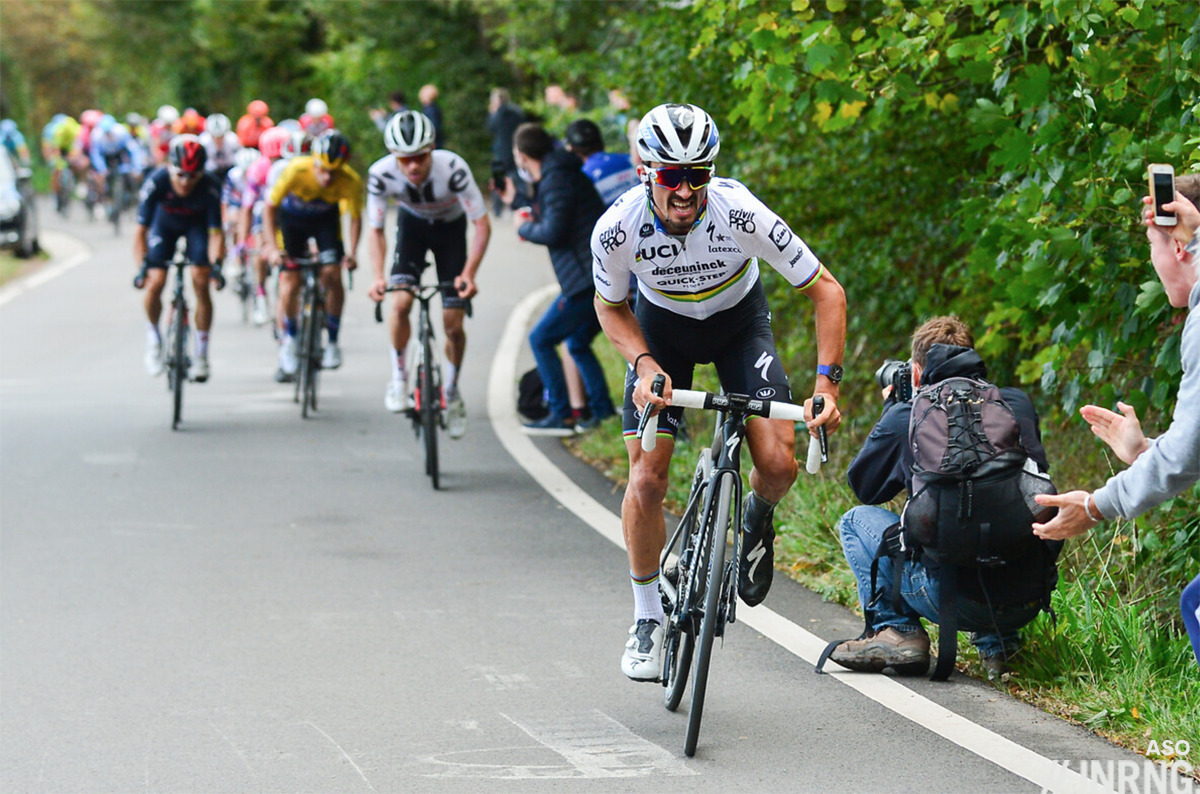 The oldest of the classics is saved for last, we’ll see if it’s one of the best. The Ardennes classics have changed in recent years, what was once “uphill sprint week” is now more varied and the still novel finish in Liège is part of this.

The Route: 259km from Liège to Bastogne and back to Liège with over 4,000m of vertical gain. It’s a rolling dash to Bastogne before the route snakes back through the heart of the Ardennes via a series of steep climbs. It’s almost the same route as 2019 and 2020, the difference is after Spa there’s the climb to Desnié instead of the Maquisard climb but they’re both similar roads up to the same ridge.

La Redoute is still the big climb of the day but the imes when it was the launchpad to victory are long gone, it’s still 35km from the finish. Instead look to see who is floating over, which teams have numbers over the top and other tactical points. The road goes over the plateau and along to the climb to Forges.

The Côte de La Roche-aux-Faucons is next, it’s not a classic climb only appearing in 2008 but very selective. Listed as 1.5km at 10%, this is hard enough but after a brief descent of a few seconds it starts rising again to the village of Gonhis and it’s 1.6km long with a gradient of 5.5% which isn’t steep but with all the climbing before, both cumulatively in the day and the sharp effort just before, it’s a difficult moment and where the winning move often forms. You can see this second part of the climb on the profile below. 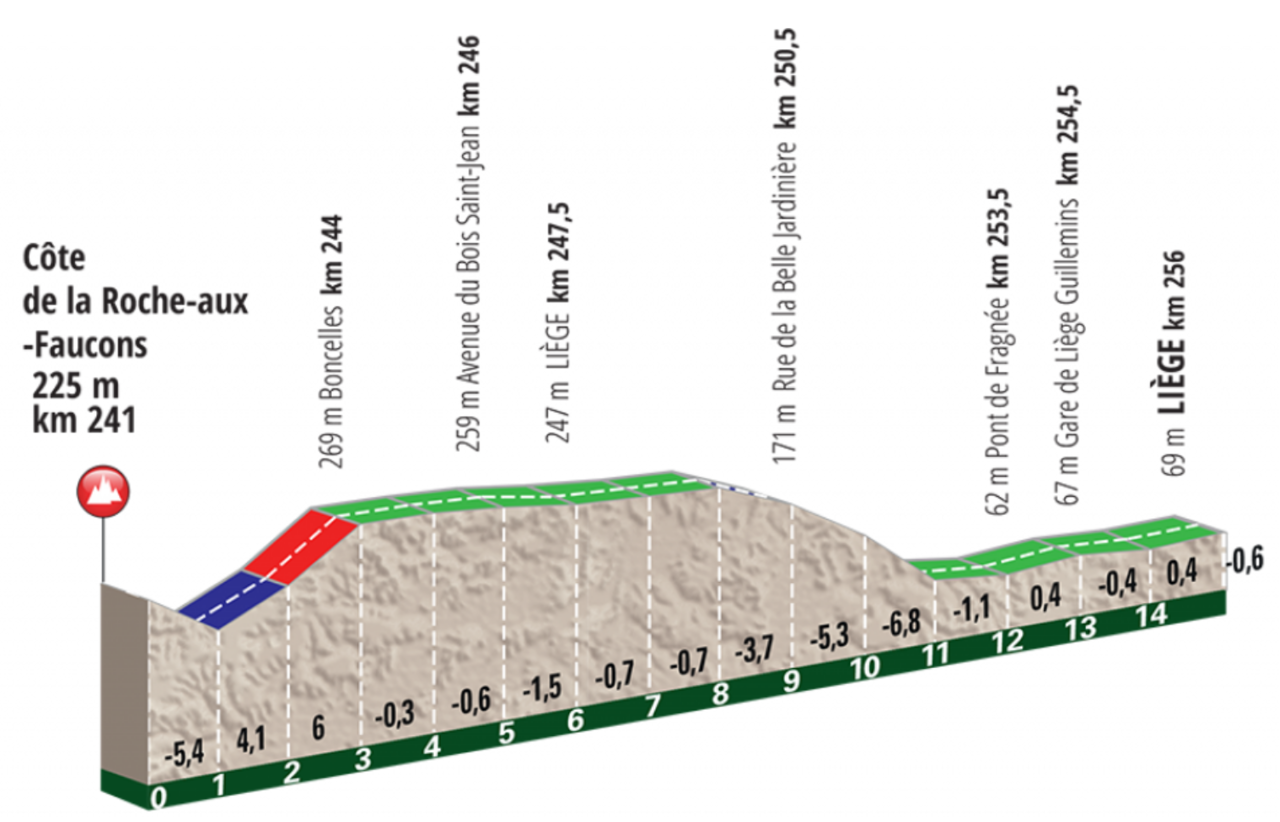 The Finish: still new to the peloton today, but traditional for those following the sport for much longer there’s a descent into Liège and then a a flat finish in town. 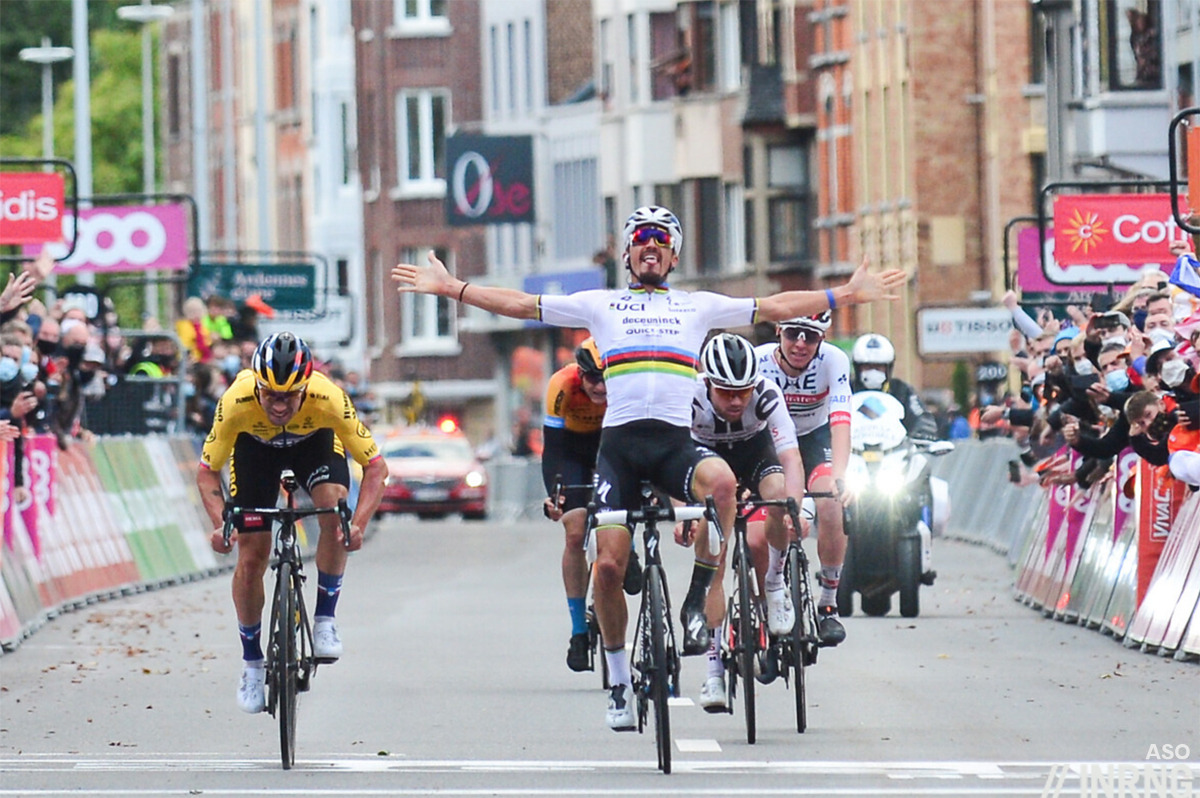 The Contenders: oddly enough Julian Alaphilippe (Deceuninck-Quickstep) has yet to win this race. He came closest last year but bungled the finish twice over, first switching in the sprint – which got him relegated – and also sitting up too early, allowing Roglič to beat him to the line. But if he can repeat last year’s scenario of a breakaway coming into Liège then he’s got a good chance of winning this time as he’s usually a quick and canny sprinter from a small group. As often with Alaphilippe the attack is predictable but irresistible and he’s likely to try on the Roche aux Faucons but is the form there? His win in the Flèche Wallonne should reassure him. We’ll see how Mauri Vansevenant fares deep into a 250km race with João Almeida back in the peloton ahead of the Giro.

Primož Roglič was the winner last year but benefited from Alaphilippe’s mistakes. This isn’t to knock his win, rather to suggest that in an orderly sprint on a flat finish he’s not an easy pick. Jonas Vingegaard is a second option but the team likely to use him in support of Roglič.

Tadej Pogačar (UAE Emirates) missed the Flèche Wallonne because of positive Covid-19 tests on his team. Now they’re cleared to race. Banking the Flèche might have been good for him but the absence means we’re all wondering where the form is. He leads a very strong team with Marc Hirschi, Davide Formolo and Brandon McNulty with the latter two are aiming for the Giro.

Max Schachmann (Bora-Hansgrohe) not having the perfect spring campaign, making the selection in the Amstel Gold Race was impressive but his third place looked inevitable. So far he’s steady rather than sizzling but this course suits, he’s got a good sprint if he can face climbers.

Alejandro Valverde (Movistar) is in great shape but how to use this? Good form is one thing but he’s not got the zip of yesteryear – he turns 41 on Sunday – so how to jump clear on the climbs or win a sprint? Perhaps he’ll have to play a cautious race and let others make mistakes?

Tom Pidcock isn’t riding after injuries from a crash on Wednesday. This leaves Ineos with Richard Carapaz and Michał Kwiatkowski as contenders too. They were very strong collectively in last Sunday’s Amstel but didn’t quite deliver on this.

Bauke Mollema (Trek-Segafredo) often races for an invisible finish line several kilometres before the real one. He’ll attack just when others are reeling and go solo to build up a small lead with a few kilometres to go at which point the others fold, stop chasing and he’s won before reaching the finish.

Among outsiders, Michael Woods (Israel) was left cursing his positioning going into the Mur de Huy as we half-expected. Here he’s got a better chance of things thanks to the wider roads and the gradual process of attrition. Warren Barguil (Arkéa-Samsic) rode an excellent Mur de Huy to finish fifth and now finds a course that arguably suits him better and he’s wily in case of a sprint finish but making the cut in the decisive moment is the hardest part for him. David Gaudu (Groupama-FDJ) and Benoît Cosnefroy can feature but how to win? Astana aren’t as strong as previous years, Jacob Fuglsang is a part winner but a repeat looks unlikely. Fellow Dane Michael Valgren (EF Education First) is a dark horse but on a course that gives little room to outsiders. Tiesj Benoot and the whole DSM team have been under the radar but this course with the repeat climbs suits. Bahrain might miss Pello Bilbao but Matej Mohorič could be the best bet ahead of Dylan Teuns.

Weather: sunshine and a few clouds and after a cold start, a cool top temperature of 14°C. Crucially a 30-40km/h wind will blow from the NE meaning a crosswind for much of the course after the Rosier climb.

TV: it’s on RTBF for locals and VPN users, probably the same channel you watch the Tour de France on at home and if not then Eurosport/GCN. The race starts at 10am and the finish is forecast for 4.55 CEST. Tune in for the last 90 minutes to get the approach to Le Redoute and then all the final climbs into Liège.

The women’s version, Bastogne-Liège if you like, is on from 8.40 to 12.30 CEST and we’ll see if Anna van der Breggen’s Ardennes farewell continues or if others can spoil SD Worx’s tactics. As ever procyclinguk.com has a comprehensive look at the contenders and more