A short stage, no climbs and an obvious sprint finish. Normally yes but watch out for the wind today, the roads are exposed and this could have the air of a semi-classic. 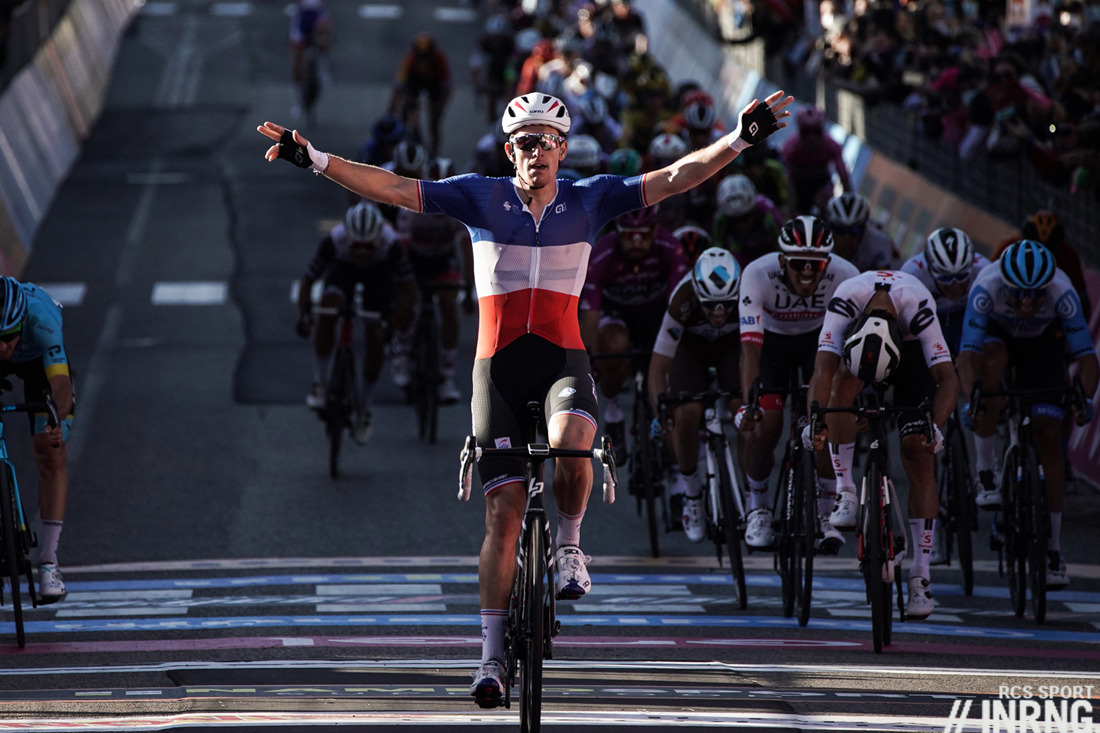 The wind shaped events, the big climb 25km from the finish could have split the race up more but the bunch hunkered town into the headwind. Then in the final Arnaud Démare was losing ground on the climb used before the finish but wasn’t in a hurry to get back, he even told team mates not to rush. Vincenzo Nibali tried an attack which seemed to destabilise Peter Sagan and then Astana surged past to place Fabio Felline, only Démare was on their wheels. The Frenchman came round the final corner and did what he does best: a long sprint up a slight rise. It’s his second stage win and he takes the ciclamino points jersey on a day when Peter Sagan (8th) and Michael Matthews (2nd) wanted to score ahead of the pure sprinters.

The Route: just 143km around the heel of  Italy to Brindisi. The map matters more than the profile today as the wind could get up, they’ll be a NNW wind of 20-30km/h and it could gust to more so this is crosswind territory. The roads here are wide but obviously not peloton wide.

The Finish: after a long straight road into town finally there are four corners to negotiate before the finishing straight, over a kilometre long.

The Contenders: Arnaud Démare (Groupama-FDJ) is in form, his team is strong and his confidence is sky high. Still in a straight sprint things went to the photofinish in Villafranca Terena so he’s not streets ahead of the rest, plus this time there’s no hill to eject rival sprinters meaning there’s a wider cast of challengers to make things harder still. He gets three chainrings below just because he’s the obvious pick but plenty can hope to surf his wheel and then zip past with 50 metres to go. Fernando Gaviria (UAE Emirates) ought to be a strong pick but seeing him dropped on climbs lately suggests his form isn’t where it could be. Deceuninck-Quickstep have Davide Ballerini and Alvaro Hodeg and even King Solomon might find it hard to chose between the two but the team are great in crosswinds so watch out. Elia Viviani (Cofidis) gets the dragstrip finish to suit, he’s had a rotten year – the Olympics were his big focus but that went out the window – so just one win could transform everything and normally he’s got the torque for a late surge. Peter Sagan (Bora-Hansgrohe) should be close and a win too would mean so much too.