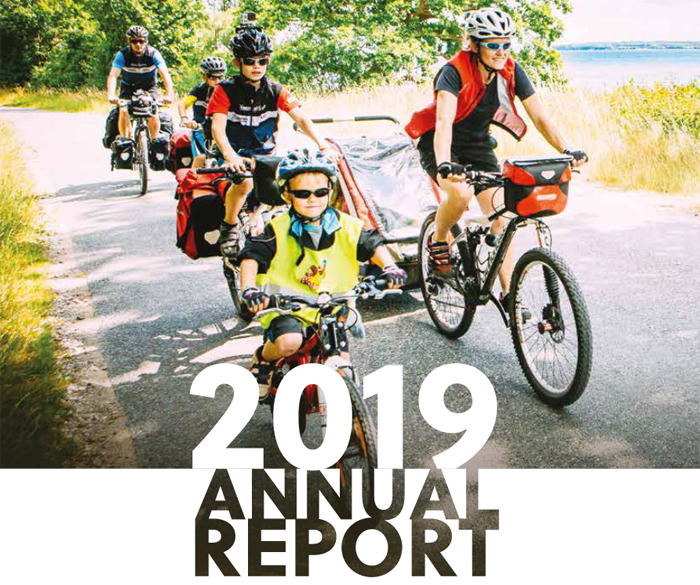 The annual look at the UCI’s finances, never the most exciting read but it’s a chance to follow the money behind the governing body. You can download the full report from the UCI website. As well as the dry numbers there’s also a look a few other stats like falling TUE requests and the success of the Tramadol ban.

As a reminder the UCI is cycling’s governing body and it now has 196 member federations around the world to which it is accountable. It has eight primary activities: road, track, mountain, BMX, para-cycling, cyclo-cross, indoor (cycle polo, gymnastics) and trials. The UCI sets the rules for the sport but “governing body” implies a degree of authority it doesn’t always possess, especially in men’s road cycling where it often arbitrates between competing interests. The short version of this paragraph is don’t equate the UCI to pro racing in Europe.

All the budget figures here are in Swiss francs (CHF) because the governing body is based in Aigle, Switzerland, it’s based inside a small building tucked behind a retail park and some tennis courts – and the exchange rate is mentioned below but for shorthand you can equate one franc to one US dollar.

These are the accounts for the year ending in December 2019 and so pre-COVID-19 but some of the commentary in the report was written in the spring this year and touches on what is to come with talk of big cost cutting and being “extremely cautious” about the financial outlook for 2020 and 2021. But the numbers in the report represent where things were going before the virus struck. 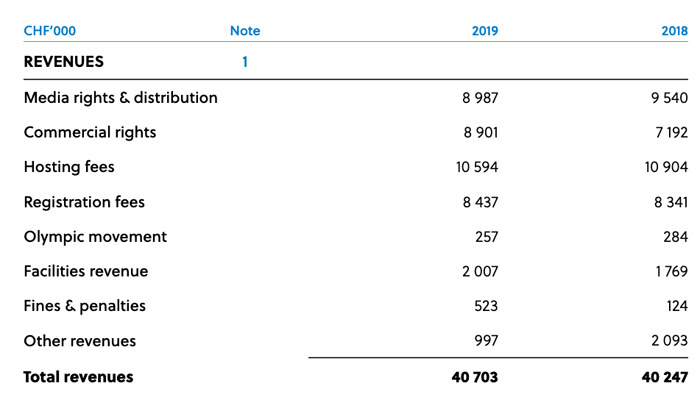 2018 was supposed to be exceptional, a “triple whammy” to use the UCI’s own term. But last year’s world championships in Yorkshire, Britain, cost the UCI several times over. The sales of rights were already flagged up last year as likely to be lower but the latest report cites poor weather – the fan zone had a capacity for 40,000 but was closed for half the week due to “incessant rain” – and also “a lack of local readiness on the ground”. The UCI’s “World Cycling Centre” also ran at loss, this is its velodrome and facilities and reduced bookings and further expenditure raised costs. But three million francs of financial gain on investment – stockmarkets soared in 2019 – helped reduce the loss for the year. 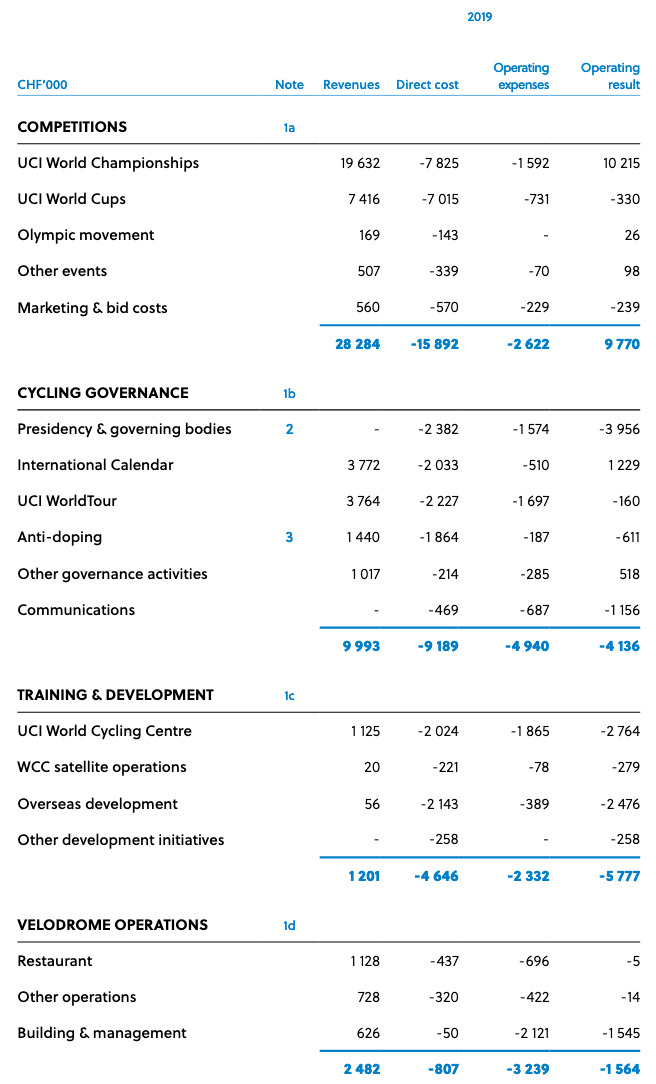 The tables above show the breakdown of revenues by function for the UCI. While the UCI is the sport’s governing body, financially it’s an organising body as it makes ten million francs in profit from organising the Worlds, the number at the top-right and then you can see the losses mount up for governance, training and the velodrome.

The UCI Solidarity Programme, part of the World Cycling Centre budget, is about supporting the Continental Confederations and National Federations and funding development projects, totalled in excess of CHF 2 million, an increase of 47 % since 2017. The largest share goes to Africa, over 700,000 francs but it’s not all redistribution from the Worlds down, some of the funding is local, ie intra-African spending. Overall it’s good as it’s encouraging more development around the world, whether funding the African track championships to training bike mechanics in Asia but the real test is the outcomes, not the spend, first can cycling grow and develop in these regions with more participants and then can these countries close the gap to the richer nations in terms of performances at the worlds and Olympics?

One other ray of sunshine amid the gloom is the UCI has sold multiple upcoming editions of the road cycling World Championships so it has some visibility on future income here, these championships are habitually the UCI’s biggest single course of income. There are plan to announce to 2027 soon. The upcoming championships in Imola were presumably given to the Italian organisers for low cost but allow the UCI to deliver their bargain of a world championships to broadcasters and so collect the lucrative TV rights. But the postponed Tokyo Olympics means postponed payments from the IOC, this is also a big income item for the UCI. A large share of the profits from the Olympics are paid out to member governing bodies. 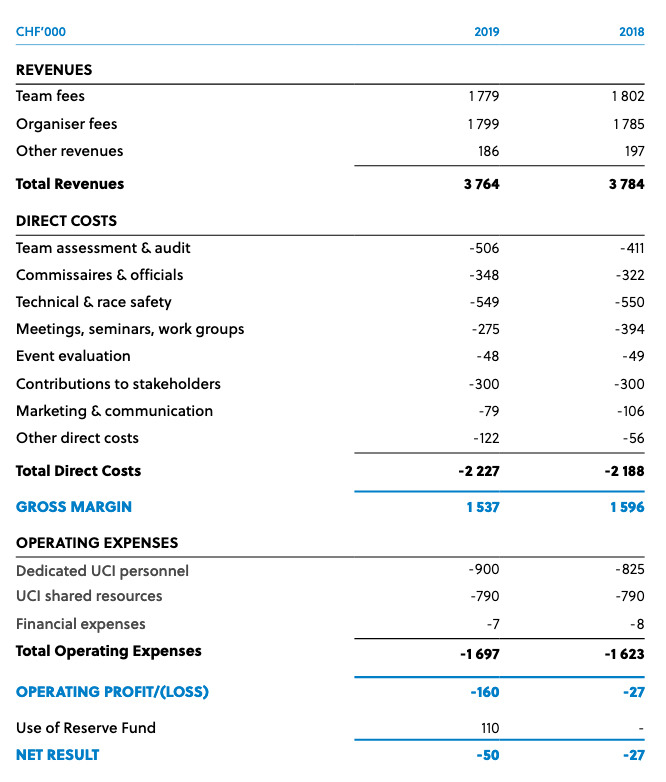 That’s the separate UCI World Tour accounts above, the UCI hives this off as a separate note in the accounts. As you can see the teams and races contribute roughly similar amounts in fees, the CHF 1.8 million revenue from teams works out at about 100,000 francs per team and in return the UCI supplies commissaires, audits team budgets to help ensure squads are viable and rider wages get paid.

A few other snippets…

Conclusion
Another loss and worse than expected but the UCI has the reserves to cover this. The piece above isn’t a forensic exploration of the UCI accounts, more a look at a few stories from the finances and there’s no big change or shock story inside for last year. Instead that’s coming, reading the 2019 report is to look in the rear view mirror while cycling’s governing body speeds toward a collision with the Coronavirus with cancellations and cutbacks. We can see what happened last year but this year’s woes, from the postponed Olympics to the suspension of most international events between March and August that’s going to wreak havoc for the 2020 accounts but the UCI has cash reserves, investment assets and contracts signed for lucrative world road race championships so with cost-cutting it should get through and this week’s world championships will help.