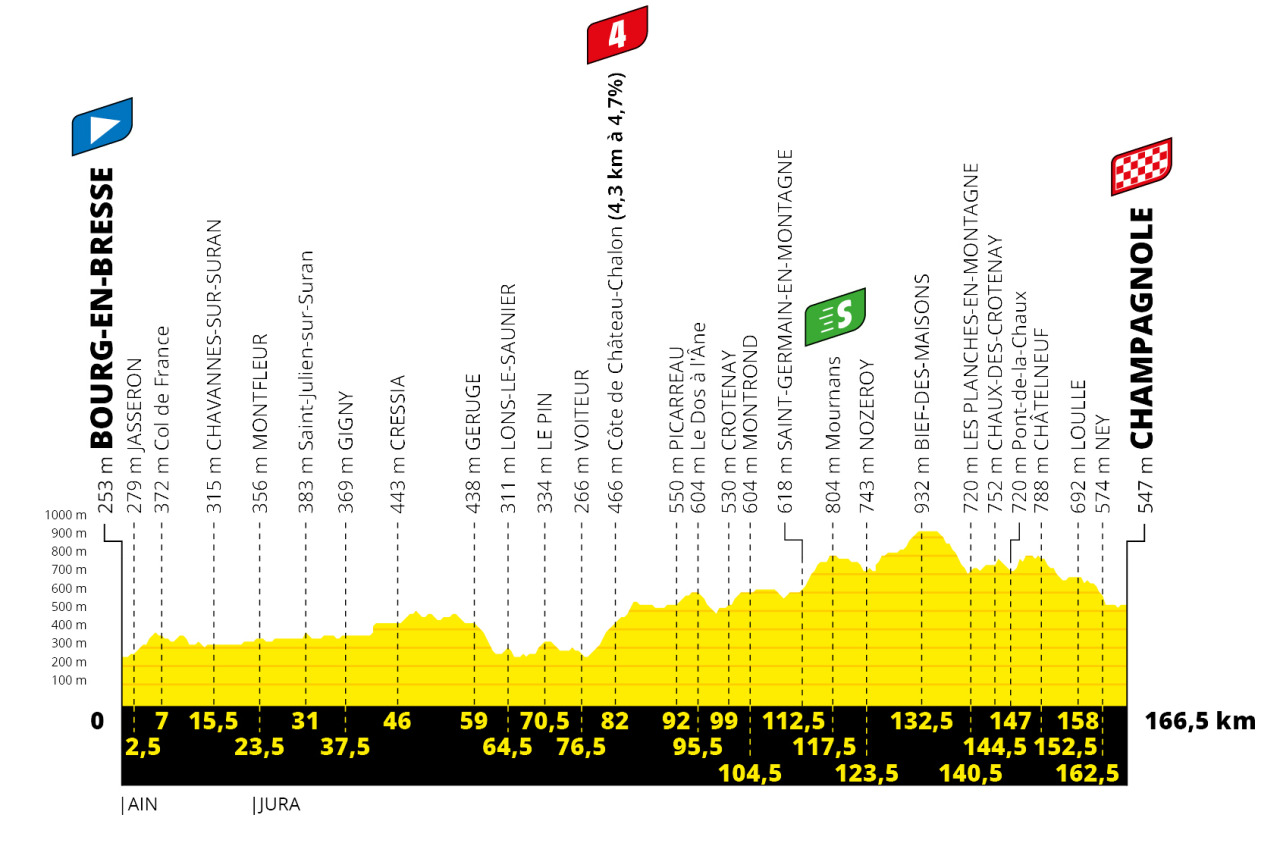 A sprint stage course despite the hilly profile but the today’s the very last chance for a breakaway to stick so there’s a good chance we get a strong move going clear rather than the forlorn “4×4” move. 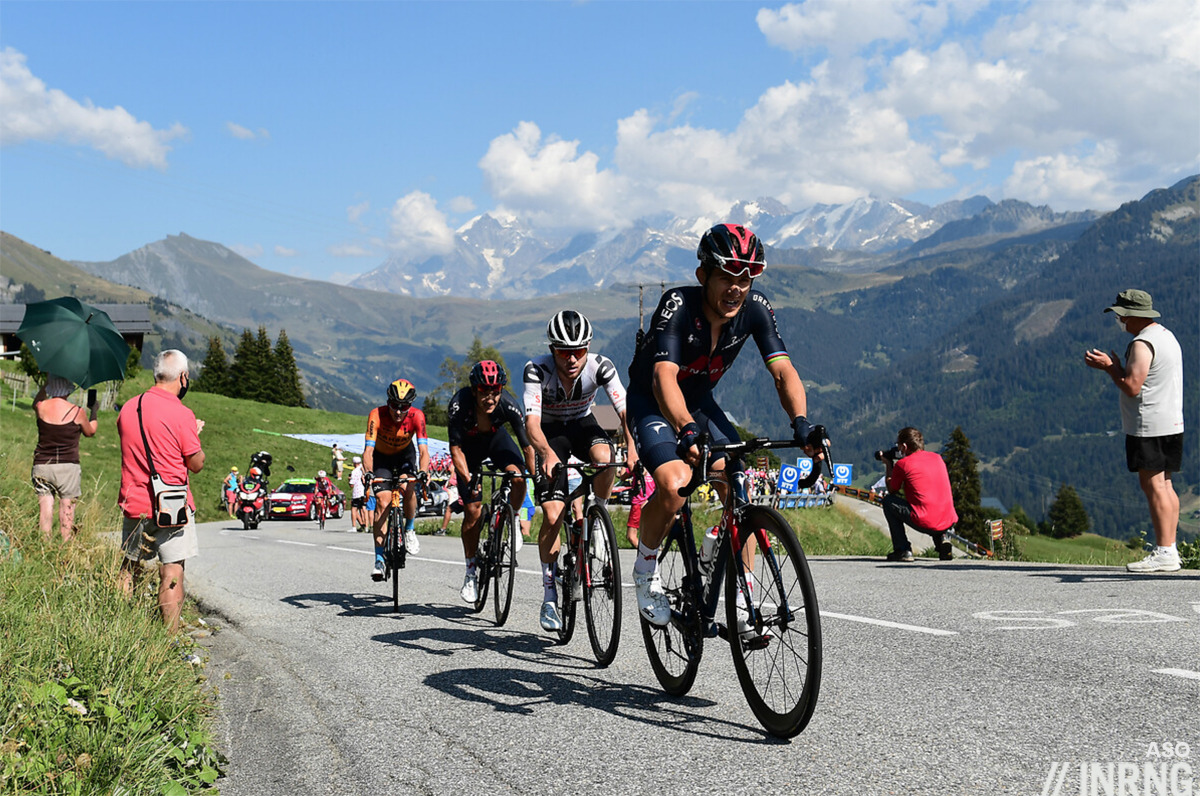 Pole position: another day, another giant fight to get in the breakaway only this time the decisive break happened inside the Siaix tunnel outside Moûtiers so the precise split didn’t appear on TV. Having missed the move B&B Hotels and Total Direct Energie were forced into a punishment chase but didn’t have the power tand gave up. Damiano Caruso waited and used the Cormet de Roselend to float across to the large group.

Marc Hirschi’s bid for the polka dot jersey was looking good, he beat Richard Carapaz to the top of the Cormet but on the descent of the Col des Saisies he lost it on a left hand bend, and if he was up and riding within 30 seconds he couldn’t get back, presumably shaken by the crash. It left a lead group of Carapaz, Michał Kwiatkowski, Nicolas Edet and Pello Bilbao but first Edet cracked on the Col des Aravis, then Bilbao on the climb to the Plateau des Glières. This left an Ineos duo out in front and they were an ideal tandem to stay away.

The Ineos pair were sharing words on the descent to the finish but in the final kilometre Kwiatkowski was speak into his radio and relief seemed to spread spread across his face. Had team orders come through? Either way there was no sprint but smiles as the pair crossed the line and an equitable result with Carapaz taking the mountains jersey and Kwiatkowski getting the stage win, his first in the Tour.

Behind we had some action in the GC group, first with Mikel Landa who surged at the start of the climb to the Plateau des Glières but he struggled to build up much of a lead. Pointless? No, he started the day 7th overall but is now fifth as the change of pace was ruinous for Adam Yates and Rigoberto Uràn and they lost over two minutes. Enric Mas made a move and Tadej Pogačar in person followed but with Jumbo-Visma left with several riders nothing was going to come of it. Ritchie Porte punctured on the plateau – if it wasn’t for bad luck he wouldn’t have any luck at all – but after a dogged chase got back on to safeguard his fourth position overall.

The Route: 166km north with a late spiral around Champagnole for the finish. It’s uphill soon after the start out of Bourg-en-Bresse, France’s chicken capital, with the unmarked Col de France lifting the race away from the plains, this is not a steep climb but it’s useful to help a breakaway form and the riders might remember it from the recent Tour de l’Ain, déjà vu encore. Then comes a succession of long and straight roads.

The second half of the stage is hilly, reaching over 900m in altitude but most of the climbs are gradual. Any sprinters carrying injuries or severe fatigue could be in trouble for the unmarked climb from, appropriately enough, St. Germain en Montagne to the intermediate sprint in Mourans. This is the hardest climb of the day but it’s 5km at 4% with some early sections at 6%. Otherwise the final third has the odd feel of more descending than climbing, with gentle and long drags up but steep and fast descents into small canyons, it’s scenic passing grazing cattle that make milk for Comté cheese and diving into gorges where rivers have cut their way. With 19km to go there’s the last real climb of the day, a level crossing, a zig-zag across roads and its up via some hairpins but not steep.

The Finish: after the village of Loule with 8km to go there’s a long descent off the mountains, it’s not steep nor technical, just harder to move up position. With 4km to go the road reaches the plains and there’s a long straight road into Champagnole and then a dip down to cross the Ain river. Here there’s an 400m uphill climb and a right turn to pass under the flamme rouge and a long finishing straight, complete with a level crossing and if no train will dare to come pass, watch for bouncing on the tracks.

The Contenders: the route looks hilly on the profile but it’s suitable for the sprinters. There are two questions, first is whether their teams all agree with this, they’ve probably not ridden the course so they might think otherwise when glancing at the roadbook. The second is what all the non-sprinters think, instead of the usual “4×4” where four riders get four minutes, today is the last chance for the 12 teams who haven’t won a stage to try something so expect more of a battle at the start the terrain in second half is much harder for a team to chase.

For the breakaway there must be a hundred riders up for it. Oliver Naesen (Ag2r La Mondiale) , Jasper Stuyven (Trek-Segafredo), Greg Van Avermaet (CCC), Alexey Lutsenko (Astana) , Søren Kragh Andersen (Sunweb) look like riders who can go clear and get the job done in the finish, and maybe Michael Valgren (NTT) and Daryl Impey (Mitchelton-Scott) but these two have been discreet until now. Maybe Matteo Trentin (CCC) goes in the break too but he’s possibly one of the fastest sprinters left as he won’t be smarting from three days in the mountains as much as others. As for Peter Sagan (Bora-Hansgrohe) this could be his stage but he’s struggling, he hasn’t win an intermediate sprint all race and even Michael Mørkøv has been outfoxing him so a stage is now a big ask.

Otherwise for the sprint it’s not obvious. There’s not much climbing but enough to make life harder for riders already aching from three days in the mountains. So Trentin is a contender if he’s sat tight and Caleb Ewan (Lotto-Soudal), Sam Bennett (Deceuninck-Quickstep) are the fastest… and of course the mini-cannibal Wout van Aert (Jumbo-Visma), currently 19th overall but he’s got his eye on the final three stages.

Weather: sunshine and some clouds, 23°C

TV: live coverage from the start at 1.30pm CEST to the finish forecast around 5.30pm Euro time. The hilly part of the second half begins around 4.15pm, tune in for the scenery.