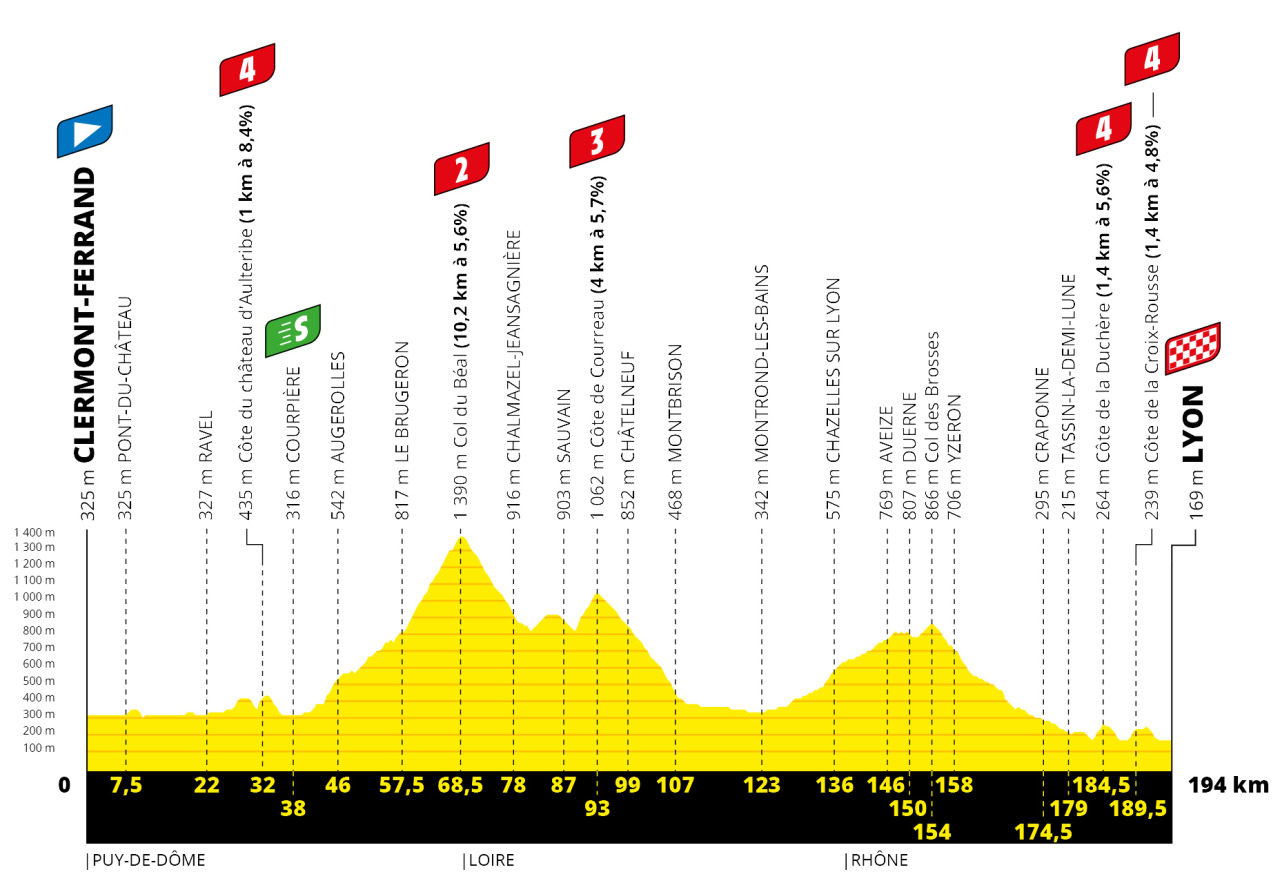 The third of three stages suitable for the breakaway, today’s course is the most accessible to riders, many will have marked today’s stage as their big chance. 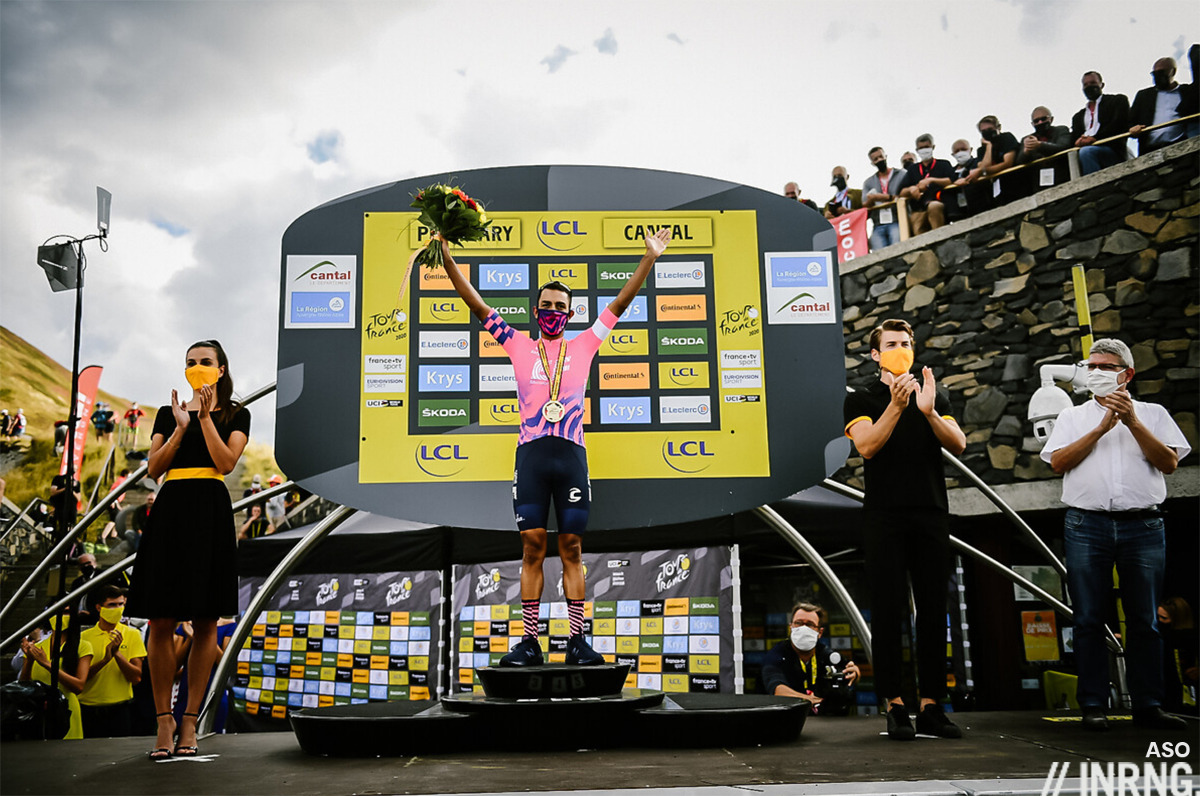 On the Peyrol: a big breakaway formed, as groups slipped Jumbo-Visma’s yoke, the Dutch team seemed determined to boss the stage from the start to the point of closing down Total Direct Energie riders who, unless they jumped on a motorbike and took an hour, represent no threat.

EF and Bora Hansgrohe had the numbers. Max Schachmann overhauled Neilson Powless on the approach to the Col de Néronne but  got swamped again. Two days ago it was Marc Hirschi on the Suc au May, this time it was Dani Martinez on the Pas de Peyrol. Bora-Hansgrohe played their tactical cards well with Lennard Kämna marking Martinez on the Col de Néronne and tucking in behind him for the long traverse to the final climb but those spatula legs never packed the punch needed and the Colombian won the stage.

Behind the GC battle ignited late. Primož Roglič managed to put some daylight between him and his rivals, except Tadej Pogačar. It was Pogačar who attacked first with less than 2km to go and the Slovenian tandem opened up a gap which they gradually expanded in the slow motion finish.

For a moment Ineos’s biggest worry was their first positive Covid test and the threat of having to leave the race if there’s another positive next Monday but the French health ministry helped them out saying the counter is reset. Now Bernal’s form is the prime concern, the team took up the pace on the Col de Néronne only for Bernal to lose 38 seconds in two kilometres on the Pas de Peyrol. But beware of extrapolations, this was a steep climb with a final two kilometres at 12-13%, an intense effort when longer climbs are to come, it was a perfect climb for Roglič and Porte rather than Bernal, Uràn, or Quintana who’d crashed earlier too. Still it reinforces what we’ve been seeing for a month now: Ineos run out of riders fast in the mountains and Bernal can’t match Roglič on a slope.

Meanwhile Romain Bardet and Guillaume Martin fell out of the top-10. Bardet had crashed hard and leaves the race with concussion. As for Martin perhaps a case of reculer pour mieux sauter as he’d come for stage wins and even if he was riding high on GC there was a time trial between him and the Parisian podium. Now there’s space to attack.

The Route: 194km east across the Forez. The first 100km are déjà vu with an identical route out of Clermont and over the Col du Béal to last month’s Critérium du Dauphiné. Once again the Béal isn’t climbed via the hard route, instead it’s a more gentle approach and the descent is gradual.

The climb to the Col des Brosses is pretty much as the profile shows, a long gradual slog uphill but zoom in and it’s a touch more varied, the odd descent here and the occasional tough ramp there especially towards the top with some 7-8% sections. But it’s more a change of gear than a change of tactics. The descent is gentle and at times barely noticeable and the roads often have a Roman feel, they’re long and straight into Lyon. 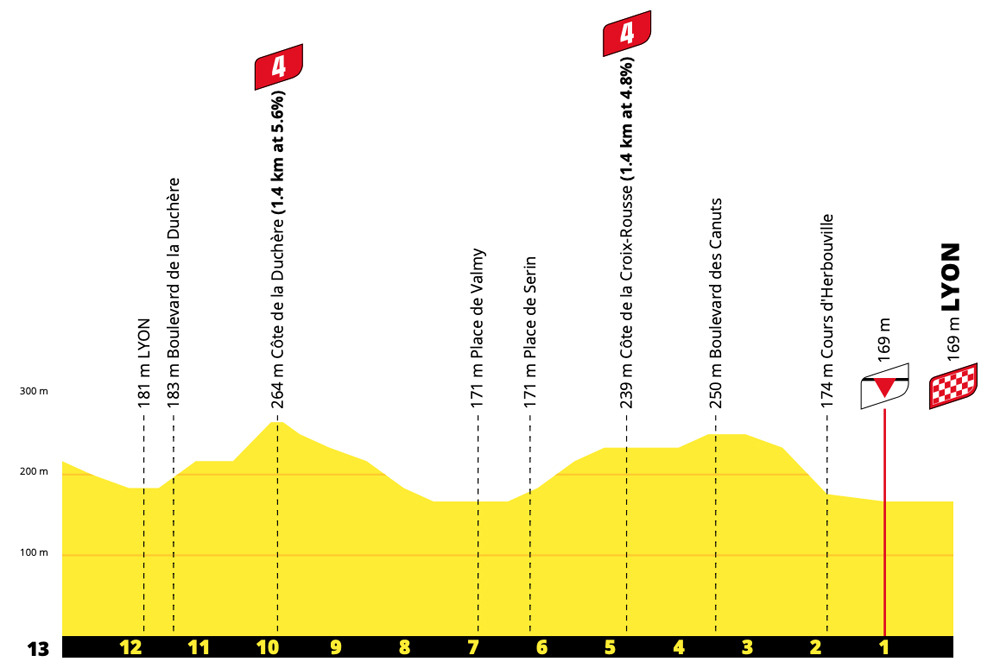 The Finish: an urban finish in Lyon, cycling is that most rural of sports in Europe but here’s a chance to visit a big population area… only today the finish is closed to the public for obvious reasons and the course has been tweaked. Lyon is France’s answer to Rome, a city built on several hills. Here we have two late climbs and both steep enough for attacks. The first to La Duchère on big boulevard roads and it’s over the climb and then down to the Saone and over. The Croix-Rousse isn’t as steep but climbs via a series of big hairpins, those will elephantine memories will recall a neo-pro called John Degenkolb winning a stage of the Dauphiné here and  somemore fatigued riders might think they’re in Paris as the Croix Rousse has a small steel tower that resembles the Eiffel Tower. There’s a flat section through the quartier at the top and then a fast descent on a wide road and with 1.8km the race reaches the flat finishing straight alongside the Rhone.

The Contenders: today’s stage scales the Col du Béal but it’s a more gentle side of the climb. Still it’s a tough climb to filter the riders so today’s picks need to be able to get over this climb and then have the zip in their legs for the finale in Lyon. It’s a stage half the peloton will have picked. Greg Van Avermaet (CCC) is the archetypal rider for today even if his win rate is low. Similar riders are CCC team mate Matteo Trentin and future team mate Oliver Naesen (Ag2r La Mondiale). Julian Alaphilippe (Deceuninck-Quickstep) has burned up a lot of energy over the past two days, perhaps this terrain suits more but he ought be rinsed by now so maybe Bob Jungels is a better pick?

Clément Venturini (Ag2r La Mondiale) is a local which doesn’t mean he’s any faster but if he can get in the breakaway he’s got a chance. Alberto Bettiol (EF Pro Cycling) is hunting stages and today’s terrain suits. Trek-Segafredo’s Jasper Stuyven can cope with the late climbs and win a sprint while Cofidis could try to play Simone Consonni, an Italian version of Bryan Coquard. Maybe Peter Sagan (Bora-Hansgrohe), a shoe-in in previous years, now a marginal pick. Otherwise let’s through in some hanseatic riders known by their initials, Søren Kragh Andersen (Team Sunweb), Edvald Boasson Hagen (NTT) and Wout van Aert (Jumbo-Visma) is a sweeper pick if somehow it all comes together for a bunch sprint but it’s hard to see. Finally the obvious breakaway nobility are Thomas De Gendt (Lotto-Soudal) but he’s not looking incisive and Alessandro de Marchi (CCC) who’s been discreet so far but posted a great ride in the Italian TT championships so the form must be there.

Weather: warm and sunny, typically 28°C and no wind

TV: live coverage from the start at 1.00pm CEST to the finish forecast around 6.00pm Euro time.