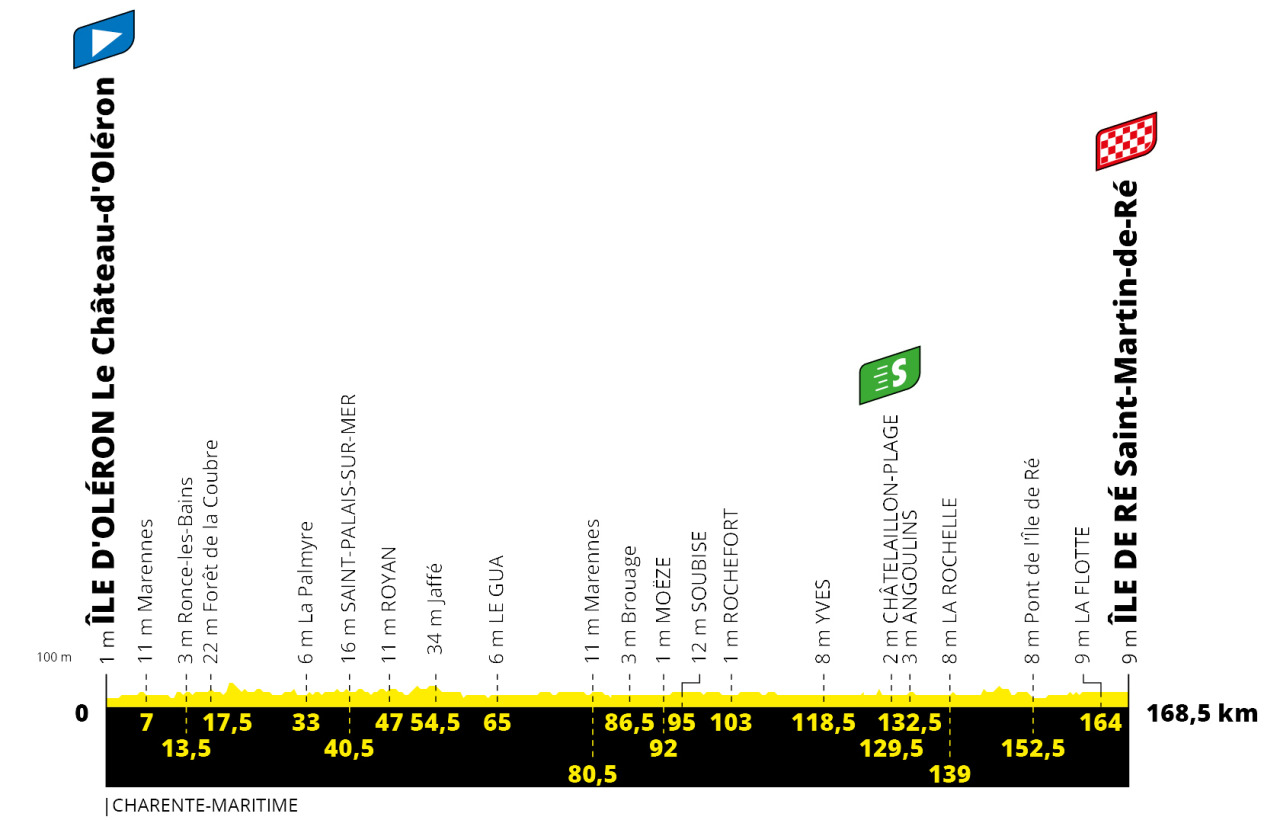 When the route was announced last October today’s stage suggested two scenarios, one being a parade alongside the coast past beaches packed with holidaymakers, the other a sailing race as the Atlantic crosswind sliced the peloton to pieces. The weather suggests the former, minus the holidaymakers, but it only takes a breeze on the exposed sea crossing at the end to change things.

The Route: le plat du jour is 168.5km between two islands, Oléron and Ré, prized Parisian holiday destinations on the Atlantic coast and much of today’s meagre vertical gain comes from road bridges. There’s an inland loop for 30km with reclaimed marshland and canals for features and road bridges feature among today’s ascensions although the biggest climb of the day comes around the 20km point where the road reaches 50m above sea level near a lighthouse in the Courbe forest.

After the intermediate sprint the race heads towards the city of La Rochelle and street furniture becomes more prevalent along the coast with roundabouts and what the French call haricots or “beans”, the concrete dividers to separate lanes on the road. With 23km to go the race stops proceeding north by north west and heads west, past La Rochelle airport, this is a key point for the change in the wind direction, it’ll go from headwind to 3/4 tailwind. The Finish: with 16km to go the toll bridge across from La Rochelle to the Ile de Ré is arguably the tactical and technical feature of the day. Built in 1988, it’s 3km long and totally exposed to the wind and with a pronounced rise and fall so that ships can pass below in the middle which makes it just that bit harder. Once on the island the road stays on the same road and a flat finish – of course – on the ring road of Saint-Martin.

The Contenders: is it Sam Bennett‘s day (Deceuninck-Quickstep) day today? Maybe tomorrow for reason’s better explained in the next preview. Caleb Ewan (Lotto-Soudal) is still the safer pick.

Cees Bol is the first of the second picks, he’s a powerhouse sprinter and suited to a flat stage like this, plus he’s got a decent leadout and Sunweb’s morale is up.

Bryan Coquard (B&B Hotels-Vital Concept) is not quite a local but he could visit today’s stage on a training ride, only there’s not much advantage to knowing the roads, less to weighing less than 60kg today, tomorrow is much better. Similarly Total Direct Energie are the near local team so expect a rider in the break today but house sprinter Niccoló Bonifazio won’t sprint any faster today and if he did it’s no guarantee of a win.

Trek-Segafredo are contesting the sprint but rotating their riders, none are obvious contenders for the outright win but Mads Pedersen seems the most suited for today.

Wout van Aert (Jumbo-Visma) gets the obligatory mention, normally on team duty but even on the days when he’s doing this he’s won.

Weather: warm and sunny, the Tour might be held outside of the tourist season this year but it’ll still be an advert for the region. 26°C and a 15km/h breeze from the NNE which means a crosswind on the bridge to the island but only a light one, if the forecast holds true then it’s more about being on the left/south of the road for shelter… but if it’s off by just 5-10km/h then hold on tight.

TV: live coverage from the start at 1.30pm CEST to the finish forecast around 5.30pm Euro time. Tune in early for shots of the seaside but this is a likely sprint finish if you have other things to do.

Next post: Roads to Ride: The Suc au May