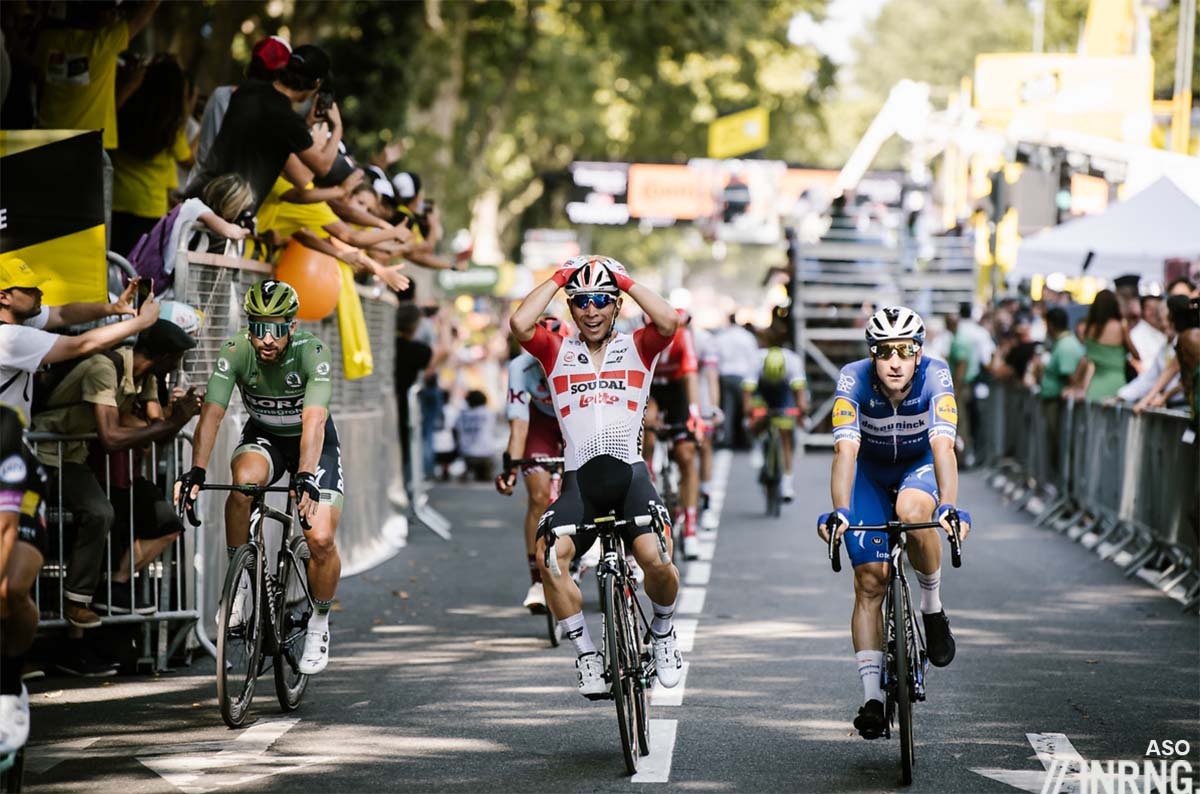 Peter Sagan has owned the competition with a record seven wins only he’s not looking as dominant as before so if he wins, maybe we’ll have a contest this time. Anyway, let’s take a closer look at all the other sprinters too.

Competition rules: points are awarded at the finish line and at one intermediate point in the stage and the rider with the most points wears the jersey. 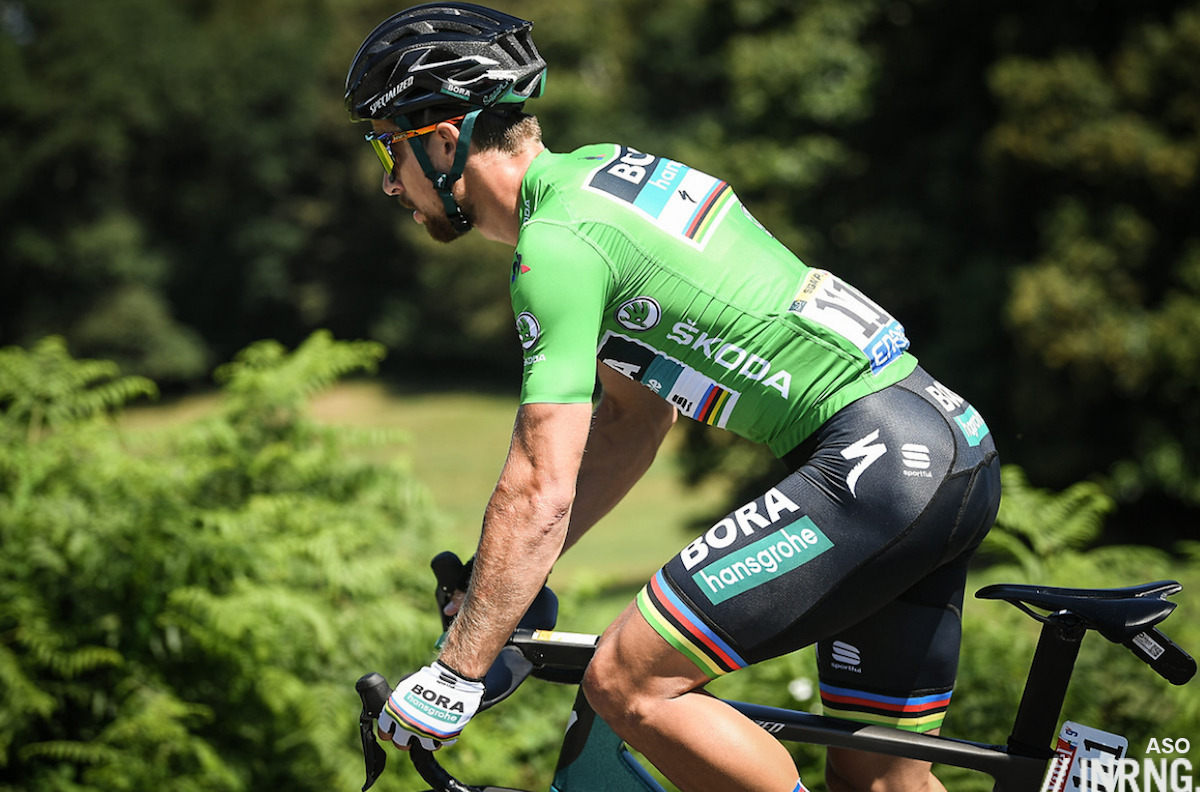 Peter Sagan (Bora-Hansgrohe) is the obvious pick, he’s won it a record seven times now between 2012 and 2019 and probably would have won it in 2017 were he not disqualified for that sprint in Vittel so if he makes it to Paris it feels like it’s his to lose. The sight of him in green has become part of summer, like tanlines and ice cream. Only he’s looking out of sorts, once upon a time at the Tour de France he’d joke over breakfast which victory salute to deploy later, now the wins don’t come as easy and triumph looks more like an exercise in product placement than pure joy. His last win was over a year ago in the Tour’s stage to Colmar but the fade doesn’t preclude him from winning the points competition yet again because if he can’t win he can keep placing: he got beaten in Paris-Nice by the likes of Garcia Cortina and Bonifazio but was still there to score. His team nurtures serious GC ambitions but he’s got Daniel Oss and Lukas Pöstlberger for support. Perhaps because he isn’t winning sprints he can also target the intermediate sprints while the teams that need stage wins see their sprinters sit out these contests. The two big questions are whether he can win on the days when other sprinters have been ejected and if he can go on a points raid in the mountains. 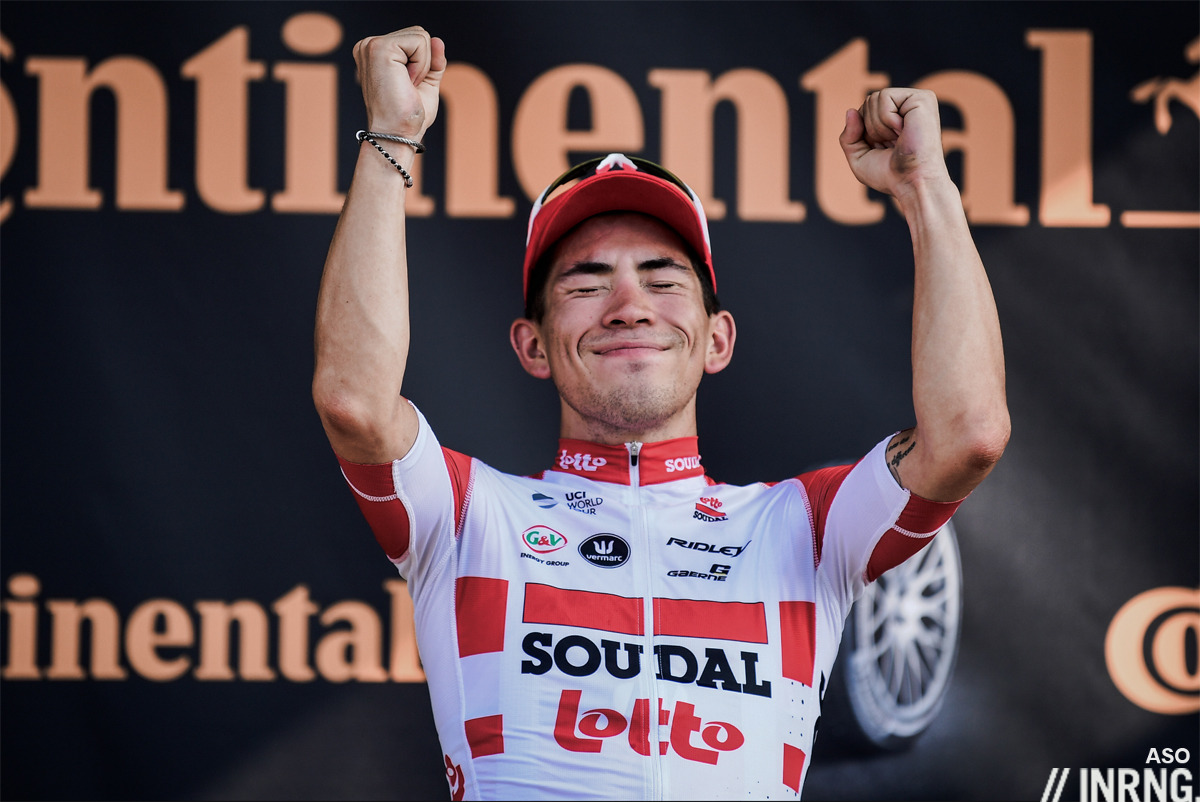 Caleb Ewan was the best sprinter in the Tour last year with three stage wins, one second place and three third places. This is a handy reminder that the points competition is not the “sprinter’s jersey”. He finished second on 248 points to Sagan’s 316 last year and on simple arithmetic Ewan would have had to convert three of the four second and third places into three stage wins just to pip Sagan on points. Still on paper he’s the best sprinter here, this year’s course has deterred some sprinters from showing up so he could score multiple stage wins and rack up the points. 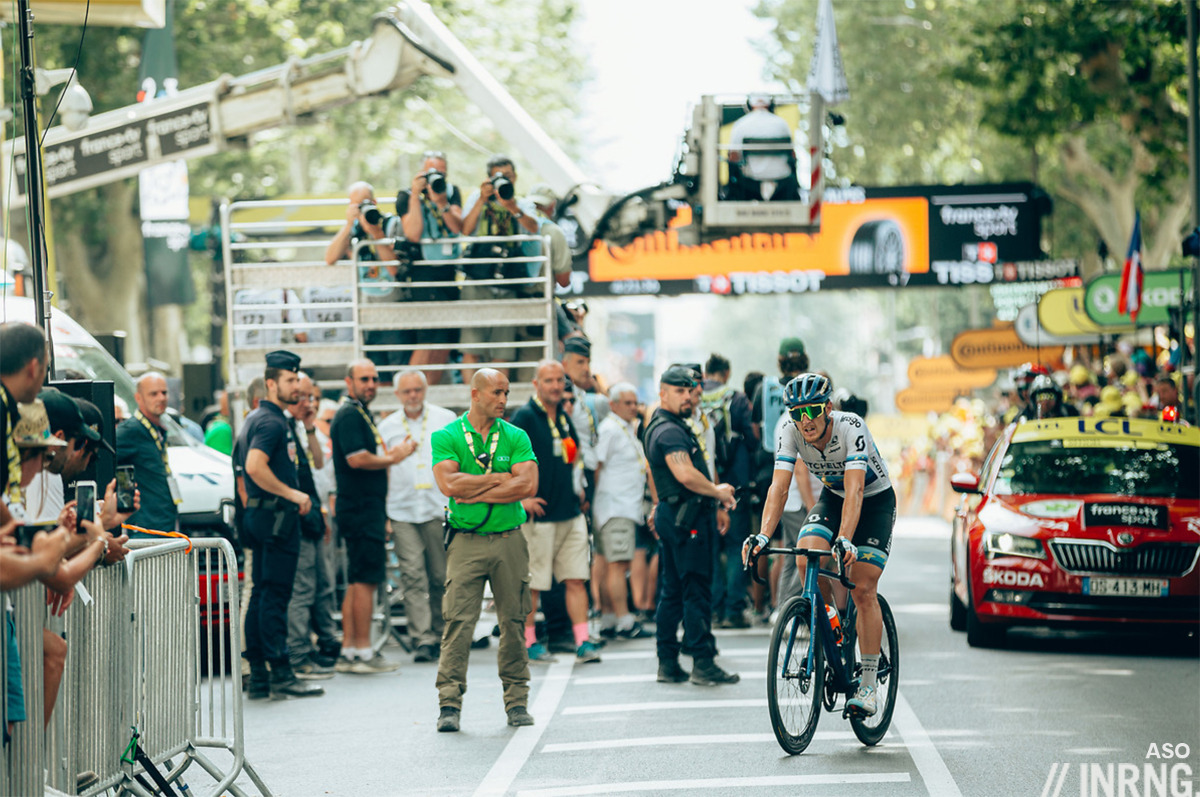 A fast sprinter, versatile in the mountains and with a clever racing brain, Matteo Trentin (CCC) is a similar rider to Peter Sagan. He’s unlikely to beat Ewan in a sprint, less so several times over but he can win when the sprinters cannot, see his stage win in Gap last year when he dropped all his breakaway rivals on the final climb.

Sam Bennett gets both a start in the Tour de France and the Deceuninck-Quickstep leadout train. He should get a stage win and he’s versatile, see his uphill attack in the final kilometre of the Vuelta a Burgos a few weeks ago. However he’s inconsistent, he can win big but doesn’t have the efficient win rate of, say, Caleb Ewan.

Nevermind the green jersey, champagne will flow if Elia Viviani wins a stage. Cofidis, as they get reminded every summer, haven’t won a stage in the Tour since 2008. They’ve long been a team reliant on wildcard invitations and firing riders into doomed breakaways but now they’ve got a World Tour licence and have upped their budget to recruit Viviani. The Italian has yet to win for Cofidis this year, racking up placings in smaller races to the point where the team has pared back his leadout to bring in extra support for climber Guillaume Martin following his strong ride in the Dauphiné. Despite the history of the past decade and this season’s form the ambition shouldn’t be pared back, Viviani’s capable of more than one stage win and his leadout riders Simone Consonni and Christophe Laporte can try on a stage where Viviani might be dropped, such as Stage 14 to Lyon.

Alexander Kristoff is unlikely to go up the road on mountain stage to hoover up points but for all his bulk and hulk he’s never quit the Tour de France when other sprinters have been eliminated in the mountains. A stage win must be the target for UAE Emirates. 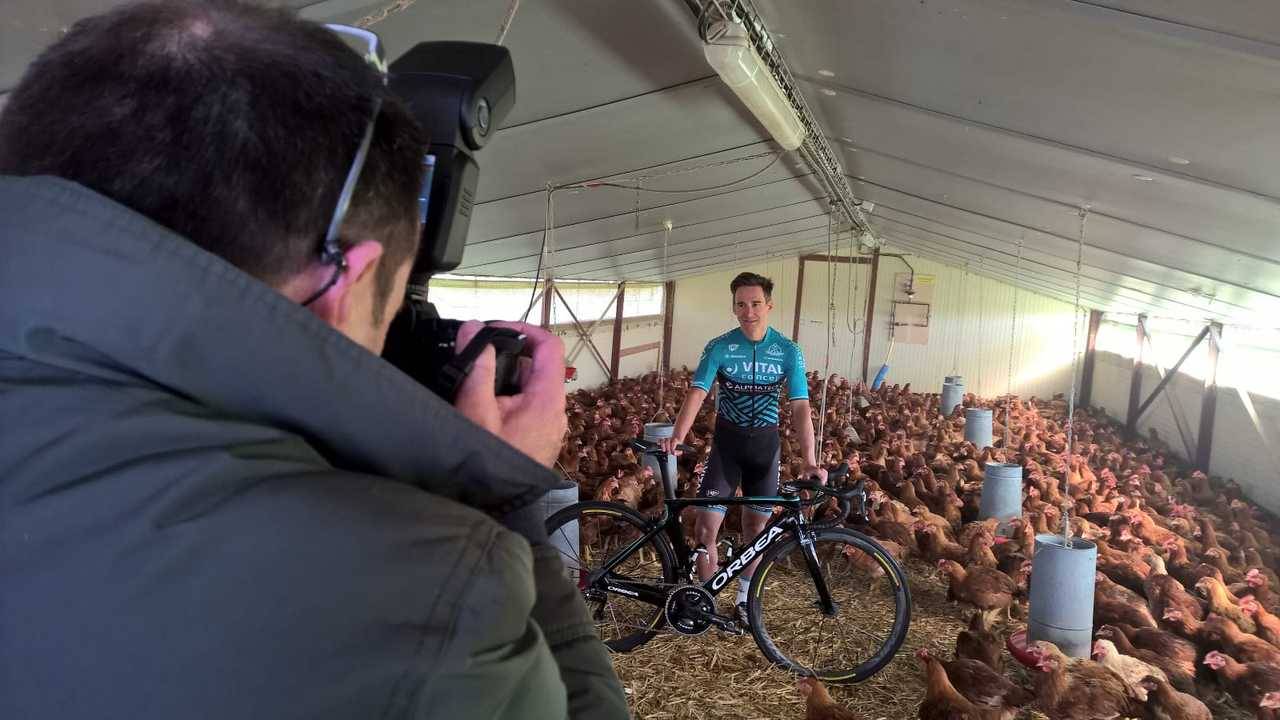 Bryan Coquard still hasn’t won a world tour race but this could change. Le Coq is sprinting better, seems more confident and could follow Julian Alaphilippe and Arnaud Démare in the final moments of the French championships when nobody else could, and all this after struggling to hold down food the previous day. He’s even been on a personal training camp in the Alps so could score on days when others won’t. Still taking the green jersey is a giant ask and a stage win would be like conquering Everest for him and his modest B&B Hotels-Vital Concept team. 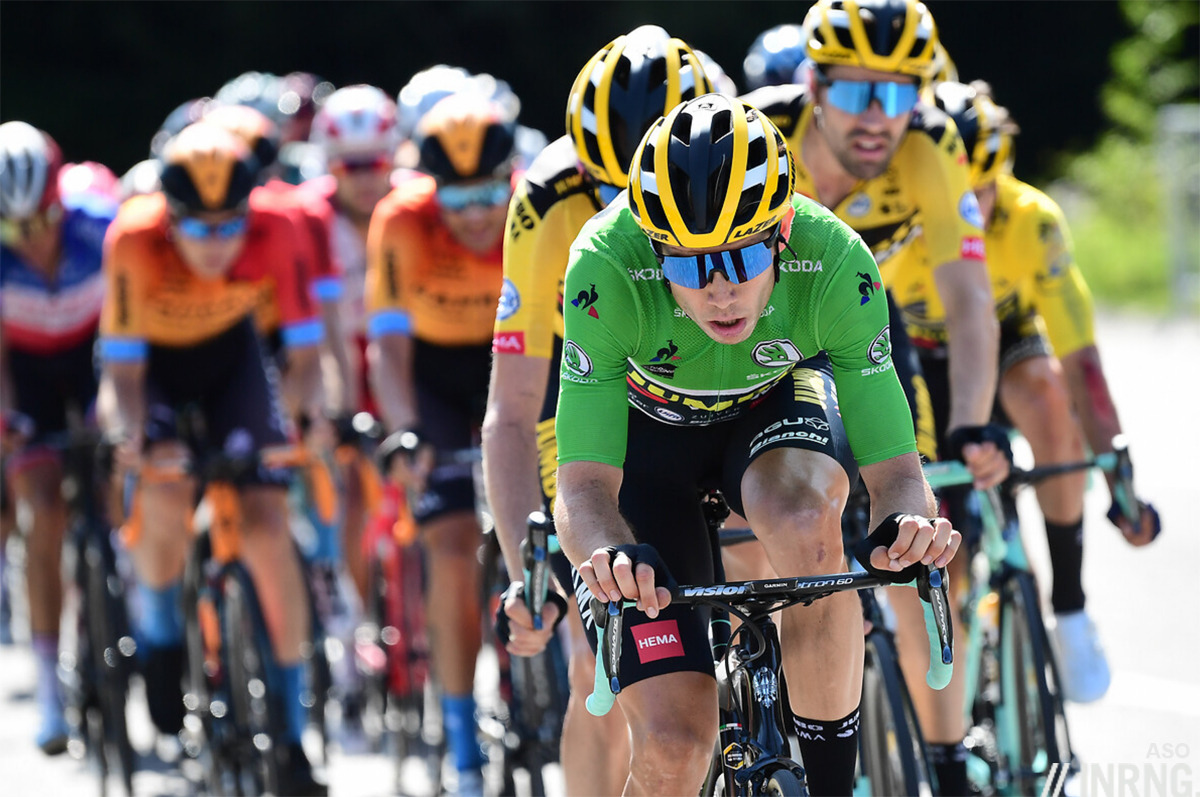 Wout van Aert is probably the most capable challenger for the green jersey but when he’s not winning classics, sprints and time trials he seems quite happy working as a domestique for his Jumbo-Visma team mates. The Dutch team come with ambitions to win the yellow jersey, not the green and the focus is such they’re unlikely to try and take both. He’s got an eye on Stages 19 and 21 by which time his job for others will be done. Steven Kruijswijk’s withdrawal means Amund Jansen comes in, not a like for like replacement with the Norwegian a useful “bodyguard” for the climbers on the flatter days and normally a trusty wagon in Dylan Groenewegen’s leadout train. 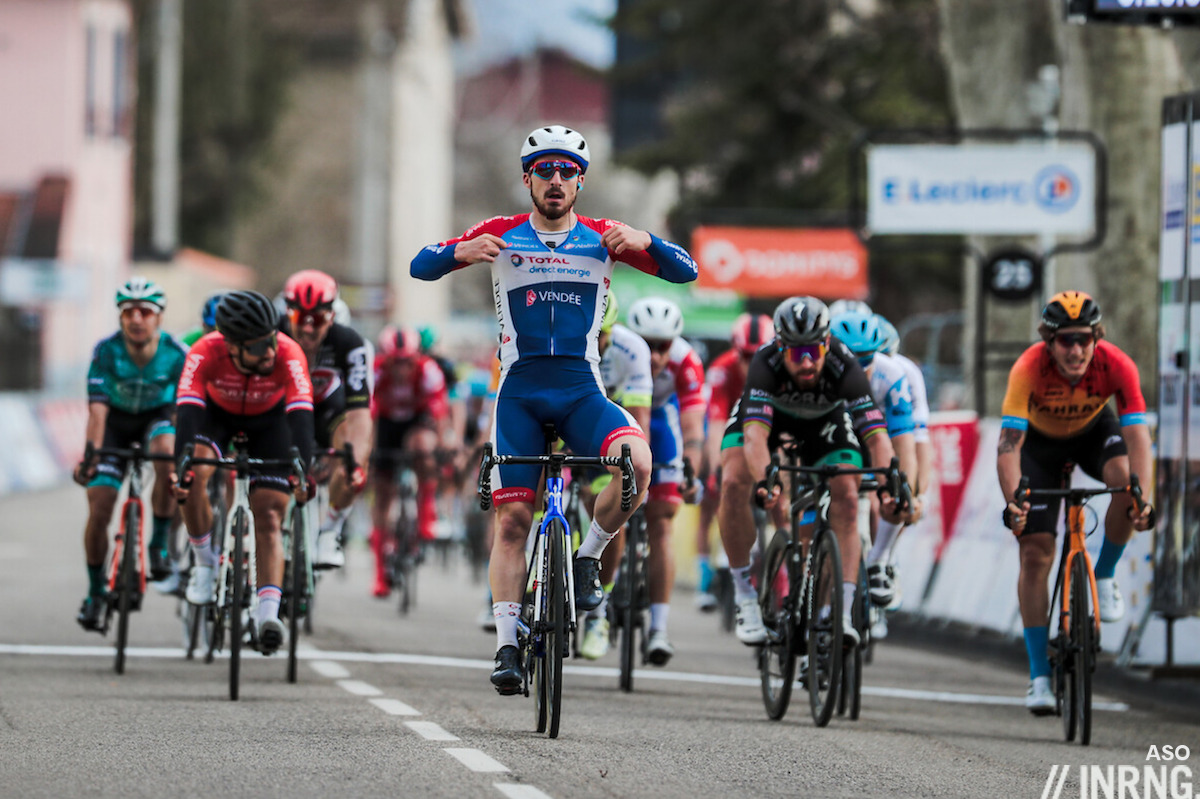 Let’s rattle through a few more sprinters. Niccolo Bonifazio (Total Direct Energie) won a stage of Paris-Nice and can win on days when rivals are tired by a few climbs. Giacomo Nizzolo (NTT) has just won the Italian championships and while some sprinters fade with age he’s looking more dependable these days, yet to win a grand tour stage but has won the Giro’s points competition twice; team mate Edvald Boasson Hagen looked like the ideal green jersey contender but is now likely to be aiming for one stage from the breakaway. Likewise Daryl Impey (Mitchelton-Scott) is surely after a stage win, preferably from a breakaway or a very reduced peloton while Luca Mezgec can occasionally take big wins. Mads Pedersen and Jasper Stuyven aren’t pure sprinters but have won bunch sprints and if they can get the day off protecting GC leaders Porte and Mollema they’ll be hunting moves from the breakaway. Nikias Arndt doesn’t win often but look for Sunweb rider’s smooth sprint, while others stomp on the pedals he stays seated but this means he might be better suited towing powerhouse Cees Bol into position for a stage win. Sonny Colbrelli (Bahrain-McLaren) just missed out on the Italian title, he’s a strong rider who tends to win in harsh conditions when rivals have been worn out rather than straight speed contests but this also means he can grind out points all race long. Israel come with three sprinters in Hugo Hofstetter, André Greipel and Tom Van Asbroeck but maybe need to get in the break to win?

Finally in case you ask what chance a GC contender or someone else? Low to zero, even when winning multiple mountain stages on their way to the overall win the GC contenders don’t score high, the best in the past decade is Cadel Evans who took fourth place on the points competition in 2011, normally it’s 6th-10th for the best GC rider, the scale is weighted to the sprinters. Julian Alaphilippe had a great Tour last summer with two stage wins and two more top-3 finishes but was only 10th in the points scale in Paris.

Comment: This year’s route has few sprint stages but last year’s edition didn’t offer many either. Sagan is the obvious pick again but not the bet-your-house-on-it certainty any more because of his form. Distinctive jerseys are a valuable prize but for onlookers the excitement is when there’s a contest with the ownership changing from day to day.

Why green? Because it was the corporate tone of Belle Jardinière, a French retailer with a famous Parisian department store and the original competition sponsor. It was once red in 1960s but has been green ever since and is sponsored by auto manufacturer Skoda.