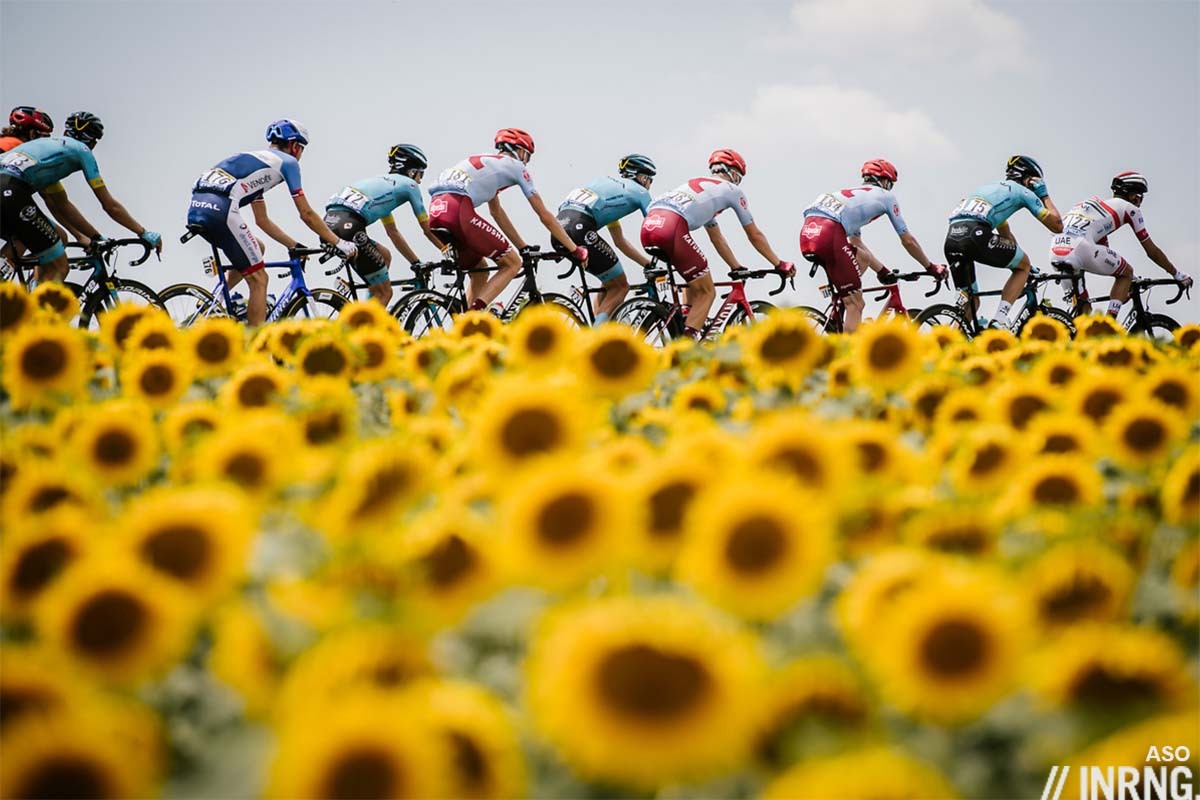 A few loose ends in and around the Tour de France…

The Tour was a TV ratings hit. In the briefing to the riders in Brussels on the eve of the start Christian Prudhomme reminded that it was an odd year meaning no clash with a FIFA World Cup or the Olympics and so the Tour could be the sports event of the summer. Work by Professor Van Reeth also suggests that for all the promise of streaming services, nothing beats beaming the images to TV. 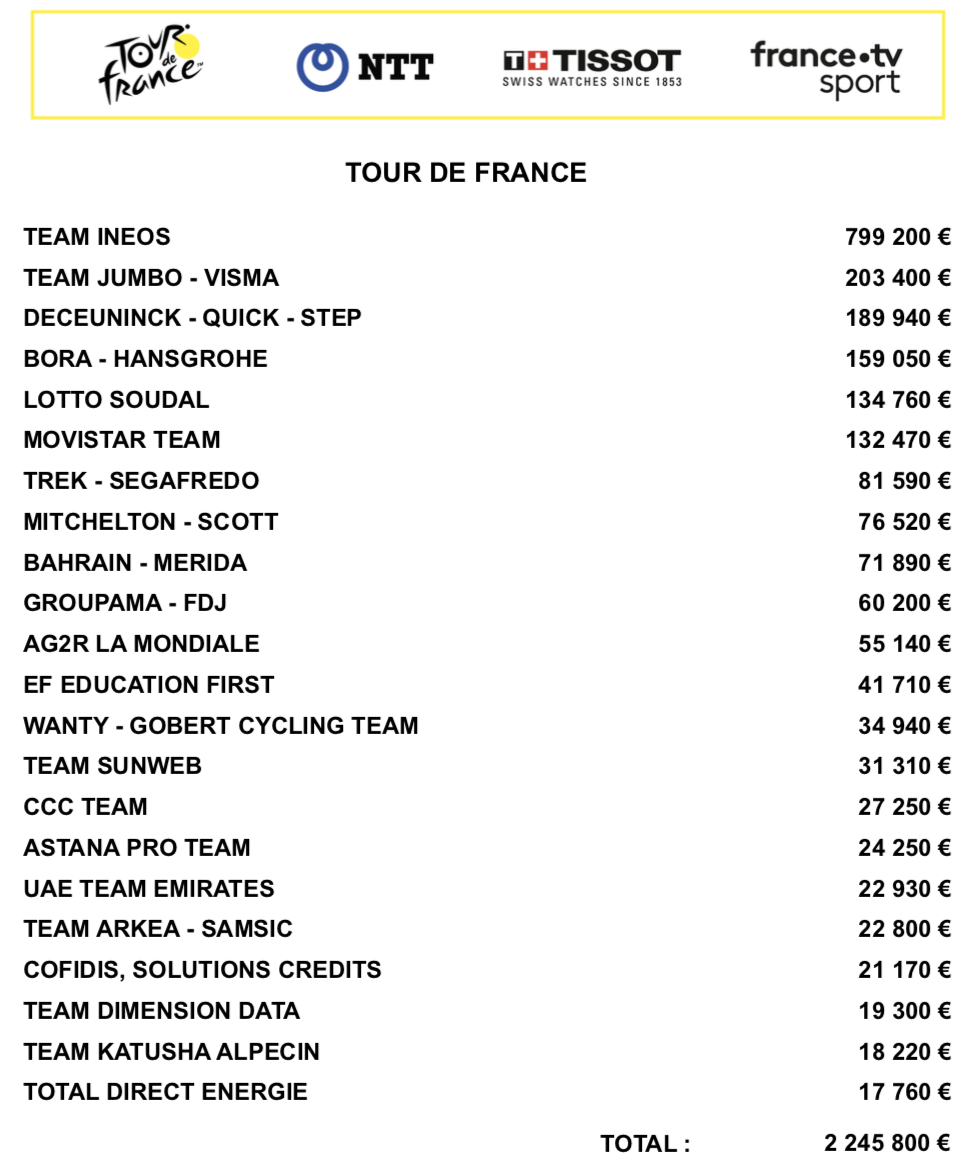 That’s Tour’s prize money table per team. It’s often misconstrued by some with the “that’s not much for such a big event” line but prize money in pro cycling is near irrelevant because riders are salaried and they’re much better off because of this: crash out of a race you still get paid, fall ill during the season and you can still provide for your family. Loyal readers know a rider can collect less than 10% of the headline sum. Instead it’s a good barometer of activity in the race, it correlates with who had a good race and a bad one.

Last on the list Total Direct Energie blamed their lack of success on the UCI points system with manager Jean-Réné Bernaudeau saying he had to have his riders spend the first half of the year chase UCI points which left them fried for the Tour. The coming UCI reforms means he’s trying to get his team in the World Tour. Perhaps points were an objective earlier this year but the team selection didn’t suggest they were going to set the race alight and once Niki Terpstra crashed out things got much tougher since Lilian Calmejane had showed up out of condition and a touch overweight. 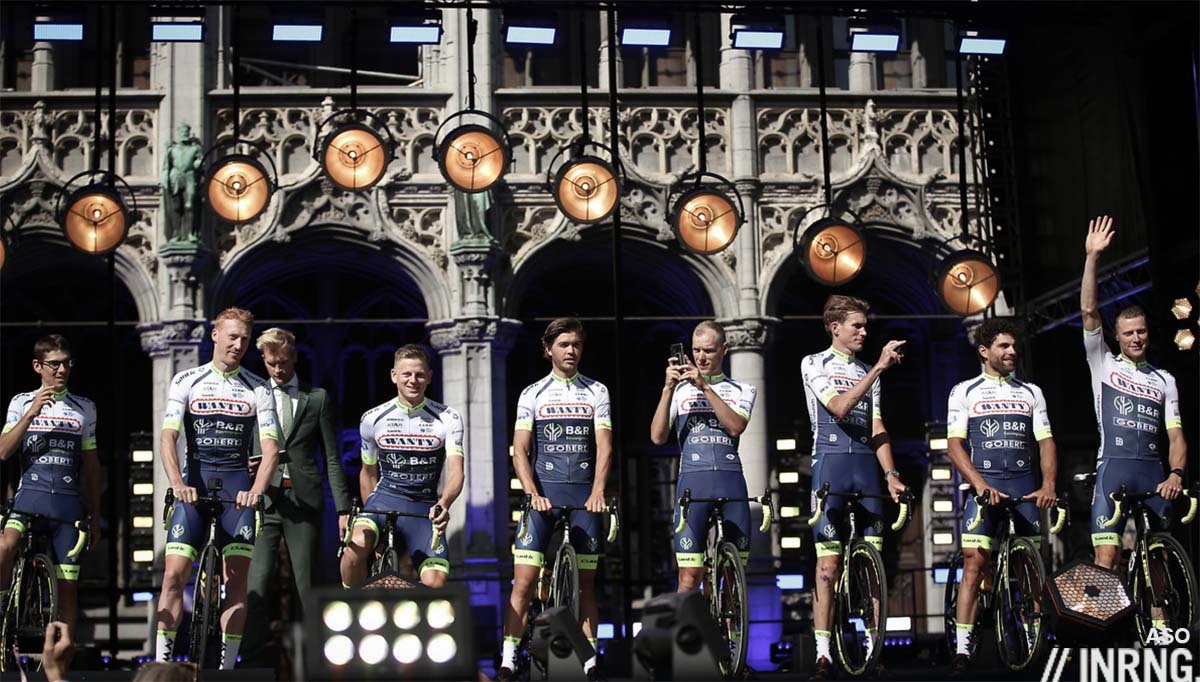 Wanty-Gobert sit mid-table in the prize money standings. Cofidis-bound Guillaume Martin finished 12th overall and they were active in the breakaways. But what if they kept some of their best riders out of the Tour de France? It’s not obvious if it’s deliberate but Loïc Vliegen just won the Tour de Wallonie and Tom Devriendt won a stage in the Tour of Austria. The team can collect precious UCI points this way by using riders capable of actually winning these kind of races while they deployed their baroudeurs to enliven the Tour. The result? They sit higher on the UCI rankings table than Katusha-Alpecin and Dimension Data.

It’s 1 August today and from today onwards formal contracts can be inked for 2020. Only the rider transfer market it gummed up because of the Katusha-Alpecin team’s future. Will it ride on, perhaps in a merger with another team or is it the end of the road? The uncertainty means team managers don’t know if there will suddenly be 24 World Tour riders on the market or not including some choice names like Nils Politt.

Team Sunweb are in a pickle with Tom Dumoulin. There’s no point trying to hold onto a rider who wants to go but they did sign a five year deal with him so if he moves do they get compensation from Jumbo-Visma? If so, how much? There are few precedents. Egan Bernal “only” cost Sky €300,000 to buy out Androni Gioccatoli; with Bradley Wiggins there was talk of a seven figure sum to buy him out of Garmin-Slipstream. The UCI rules are clear that both teams have to approve and seek approval from the Professional Cycling Council, a UCI committee. For Sunweb Dumoulin’s exit would be a big blow, he’s their star rider around which the team is built and in the last few years they’ve had relatively few wins apart beyond Dumoulin’s grand tour triumphs and there’s hardly time to buy in a replacement. Lennard Kämna had a great Tour too but could be leaving as well. 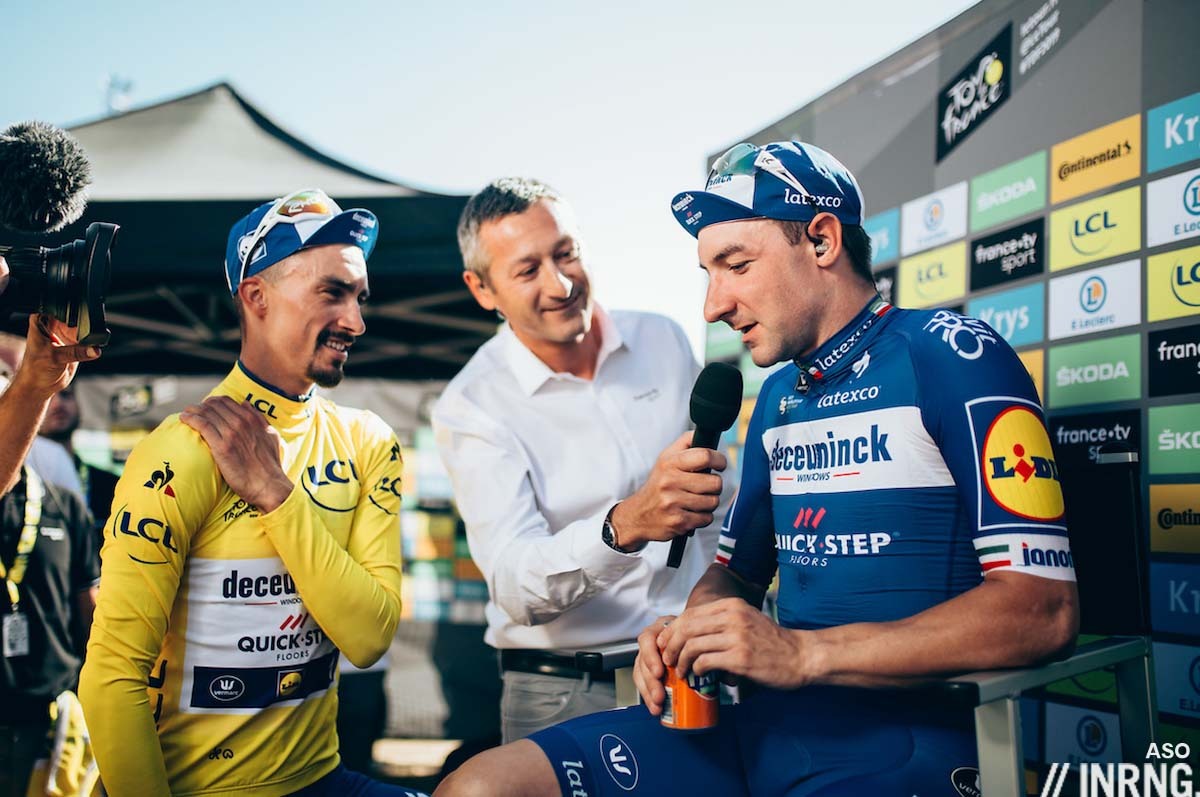 Julian Alaphilippe had offers to move elsewhere but re-signed with Deceuninck-Quickstep before the Tour de France. He could have earned more but wanted to stay and the Belgian team cracked open their normally tight piggy bank to retain him. It makes sense as France is one of Deceuninck’s top-three markets alongside the US and Turkey. This doesn’t mean Deceuninck windows are flying off the shelves but the brand name is known and it shows the team has wider interests than the spring classics. 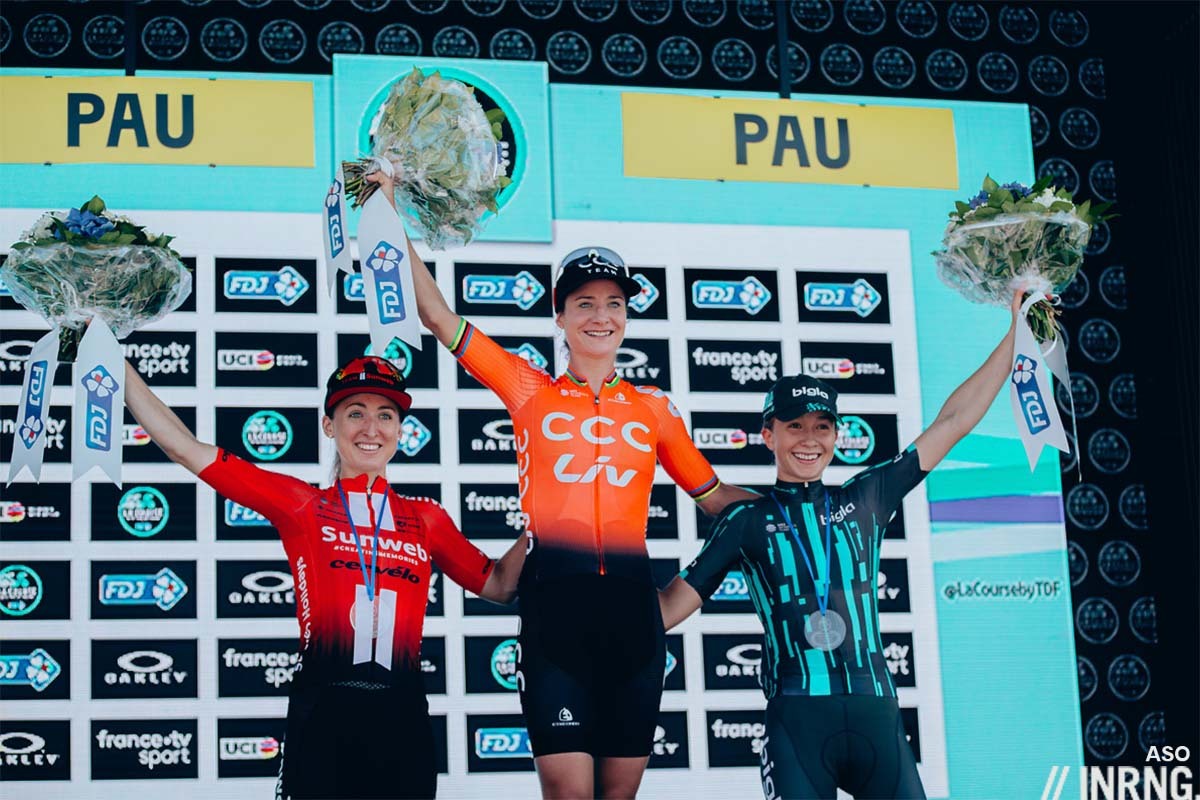 ASO are setting up dedicated group to manage women’s cycling and launch a new stage race. It can’t run alongside the Tour de France. When Christian Prudhomme said over winter that he couldn’t put on a stage race during the Tour he got flak for it but it’s not his choice. Already the Tour uses 29,000 police, up from 23,000 a few years ago and this year they had to draft in fire crews and road workers as well to help block junctions, parking fire engines and earth moving equipment at sensitive junctions which the police and gendarmes couldn’t cover. If there’s a new summer stage race surely it will take place in August as this way it’ll benefit from summer crowds in holiday destinations like ski resorts; June would feel a bit flat. It’ll also be an easy sell in the way the Tour can twist the arm of towns to host a stage of the Dauphiné, Paris-Nice or even the Vuelta as a means to getting fast-tracked to host the Tour. 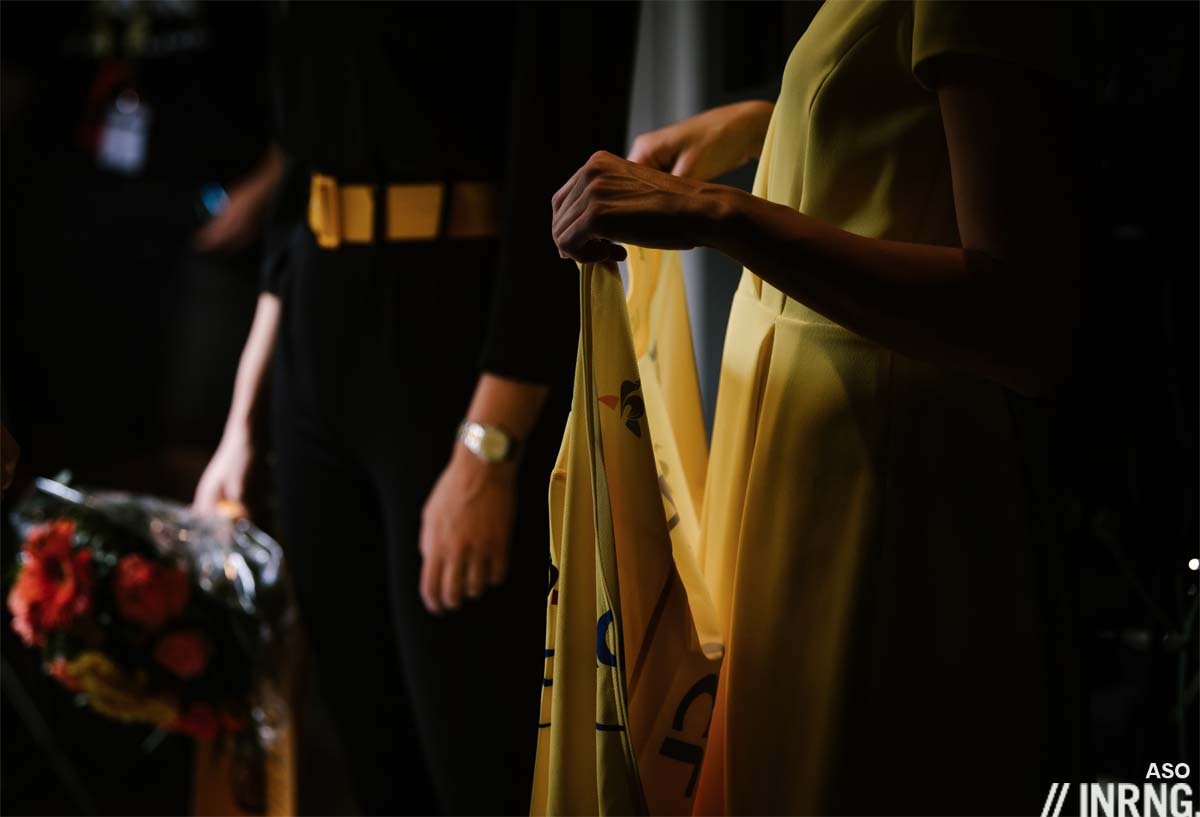 The subject of podium girls came up in July as a political topic. It wasn’t discussed inside the Tour’s bubble but outside it was an issue in the news in France, although to some extent one driven by social media and a few tweets and posts rather than a groundswell of public opinion. It’s not for this year nor probably the next but at some point in the next few years the podium protocols will change.

Someone who’s seen the Tour change a lot is journalist Gianni Mura who started covering the Tour de France aged 21 in 1967 and is 73 and still on the race. He was modern in his time, using a typewriter while others still wrote their columns by hand and then phoned them in. He’s been using a typewriter ever since but new for 2019 had a laptop in the photo when interviewed by L’Equipe. He used his last column to blast rivals La Gazzetta, awarding them a 3/10 for their coverage of the Tour which was often just a page a day and they only sent one writer in the valiant Ciro Sconomiglio who Mura awarded 8/10. It’s a bit Italo-Italian media navel gazing but there’s a point here because Italy has no World Tour teams, it’s Pro Conti teams are melting away faster than a gelato dropped on a beach and media coverage is drying up to the point where if Gazzetta struggles to cover the Tour it’s hard times.

The Tour was ruined by race radios and power meters. Just joking. These devices are common scapegoats for boring races but there are good and bad events with and without. As part of David Lappartient’s manifesto to investigate what makes cycling attractive and improve it the UCI launched a survey with some loaded questions about what makes races attractive. It got 22,000 responses and the largest country to respond was the USA. We’ll see what the answers are soon.

What’s for next year? Already a few bits of the route seem to be leaking out with talk of a visit to the west coast and the Île d’Oléron and Île de Ré, two pancake flat islands and nothing to get the mouth watering. There are a few official-looking maps doing the rounds on social media but they’re mocked up fantasies, often the work of members of the Gruppetto forum and its laboratoire à parcours or route lab section.

Next post: Can Julian Alaphilippe Win The Tour de France?