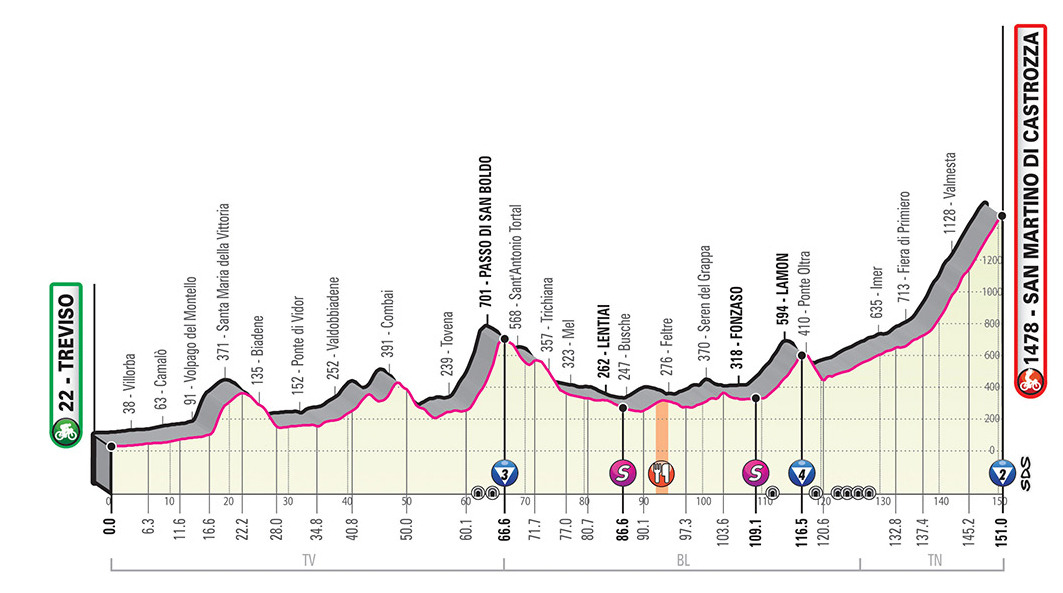 It’s back to the Alps for a day of rock and Rolle with the uphill finish a chance for Mikel Landa to continue his remontada. 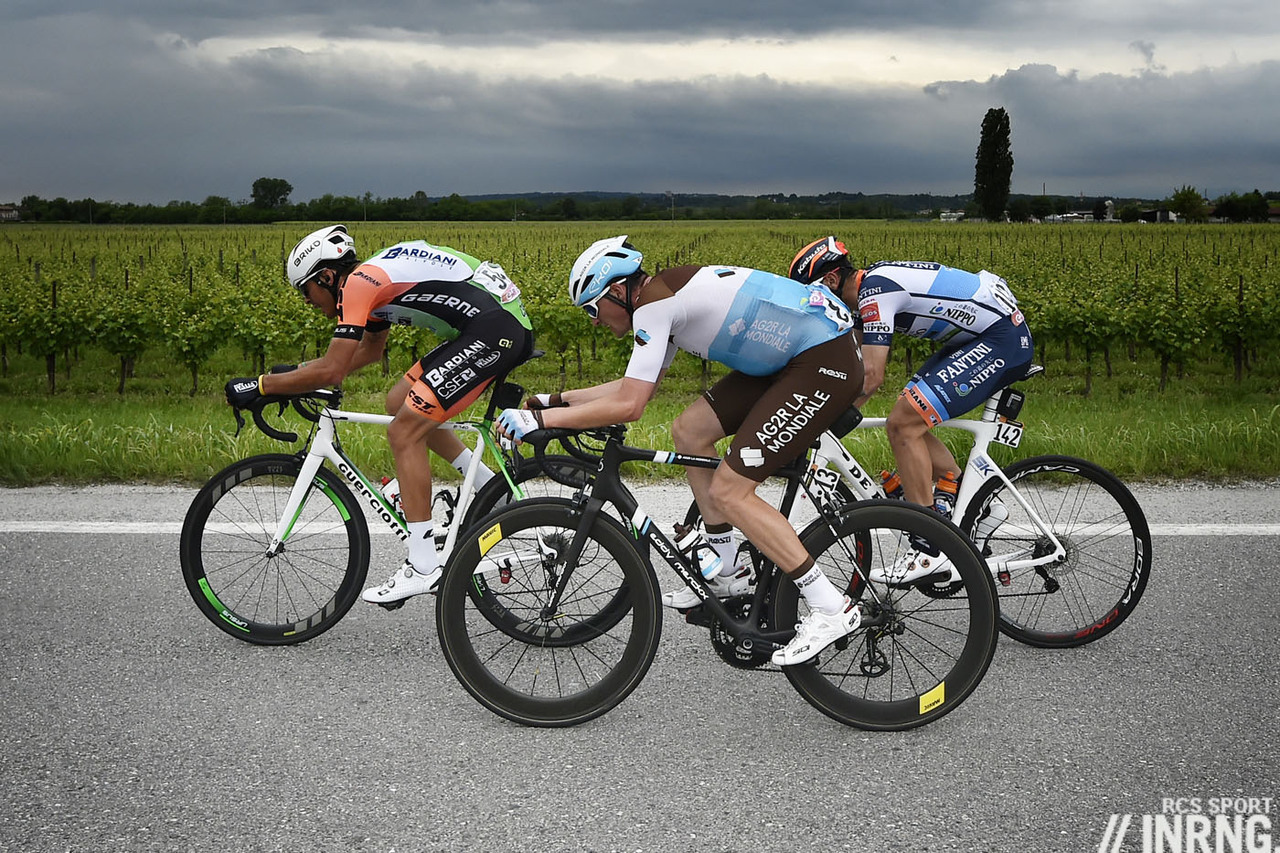 Tutti frutti: a fast start to a slow day with over 50km covered in the first hour. Then Damiano Cima, Mirco Maestri and Nico Denz went away in what looked like a fruitless move, yes Cima was there to move back into the lead of the “Fuga” prize for the most KMs covered up the road and Denz testing the legs after hard crash in the first week. The breakaway lacked riders and lustre alkke. Only they had a workable lead of three minutes with 30km to go as Dimension Data and Israel Academy led the chase with Bora-Hansgrohe having to join in too. It set up a nail-biter for the final half hour with the fugitives giving it their all and it wasn’t certain if the break would make it. Nico Denz seemed the strongest but he knew it too and this broke the trio’s harmony. Cima just held off Pascal Ackermann who thumped his bars in theatrical rage but behind Arnaud Démare messed up his sprint which meant Ackermann could celebrate on the podium as he donned the ciclamino jersey again. 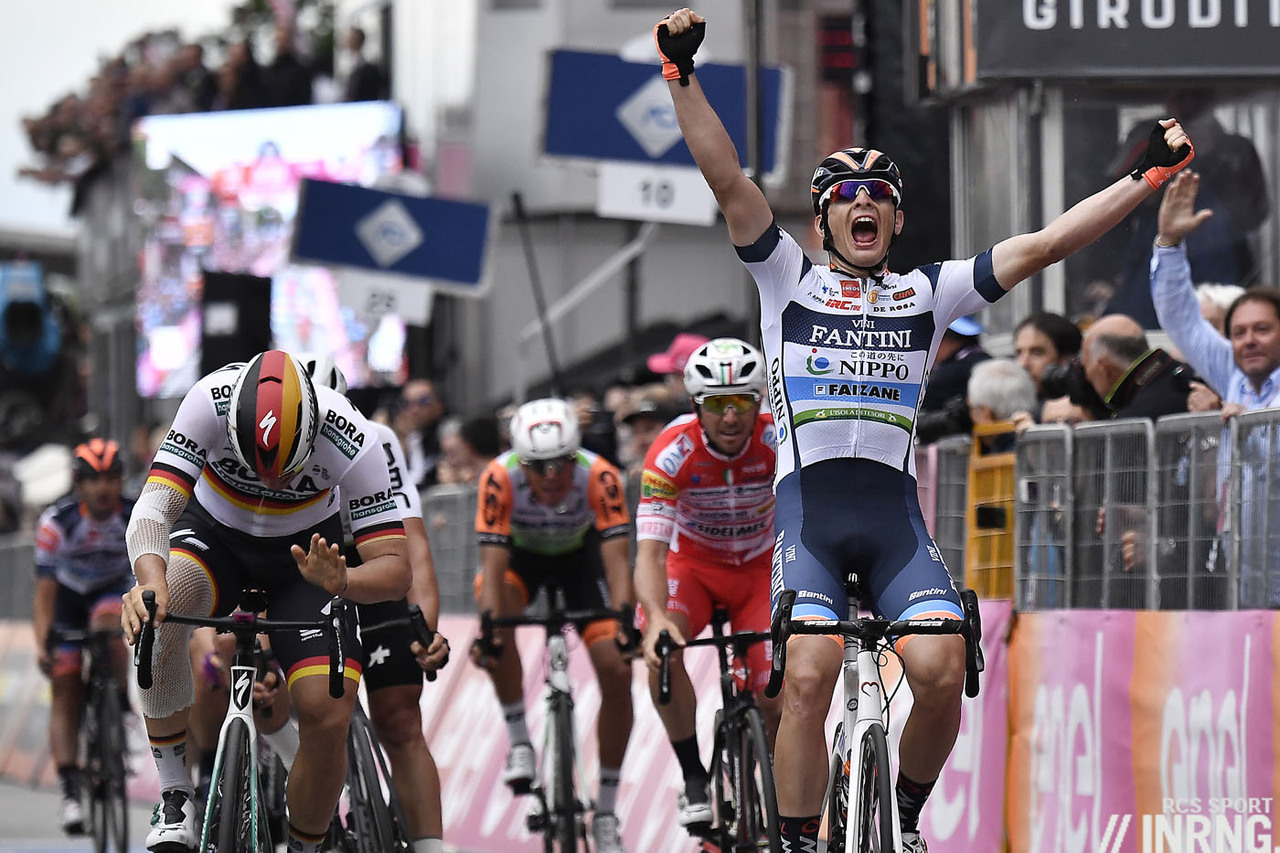 The Route: the Passo San Boldo is special, a climb than gradually rises up a valley until it reaches cliffs at the end, as if there’s no way up… and then snakes up with each hairpin bend a tunnel inside the rocks. It’s spectacular and fun today but has a grim history as it was built to supply the front in World War One in 1918 and labelled the “Road of 100 days” as locals were pressed into service to make the road, dynamiting the cliffs, breaking rocks and carrying away the rubble in as short a time as possible with shifts working around the clock. Locals? Given most men were fighting the war, the road was built by women, children, the elderly and any other spare hands like prisoners and even hospital patients who were forced to toil for long hours. It took longer than 100 days but much of the work was done between January and March, a harsh time to work outdoors.

It’s 6km long at 7.5% and the final kilometre through the rock hairpins is a steady 11%, the maximum gradient that horses could pull a cannon uphill. The next climb to Lamon is a steady main road. It’s a fast run to the foot of the final climb and this means Primož Roglič won’t run out of team mates too early.

The Finish: 13km at 5.6% and a familiar road as this is half of the Passo Rolle. After a gentle start the slope rises to 6-7% all the way and on a wide and well-engineered road. It’s not the hardest of climbs but it is late into the third week and gaps can open up.

The Contenders: it’s a summit finish of sorts, the final climb is a long drag up but this is a good day for a breakaway. Often those who show well on one day in the final week of grand tour show again. So Thomas De Gendt (Lotto-Soudal) gets the nod again, as does Fausto Masnada (Androni-Sidermec) and Esteban Chaves (Mitchelton-Scott). Nans Peters (Ag2r La Mondiale) will get less room now, but is still powerful for a finish like this. Astana have several contenders with Pello Bilbao probably their best breakaway option.

Among the GC contenders Movistar tandem Richard Carapaz and Mikel Landa look the strongest but which GC team will chase today to keep the breakaway in check?

Weather: mild and sunny, 23°C for most of the stage