Not quite a mountain stage but the climb to Montoso is tough and hard enough to shape the stage before a lively finish in Pinerolo with a steep cobbled “wall” just before the finish. 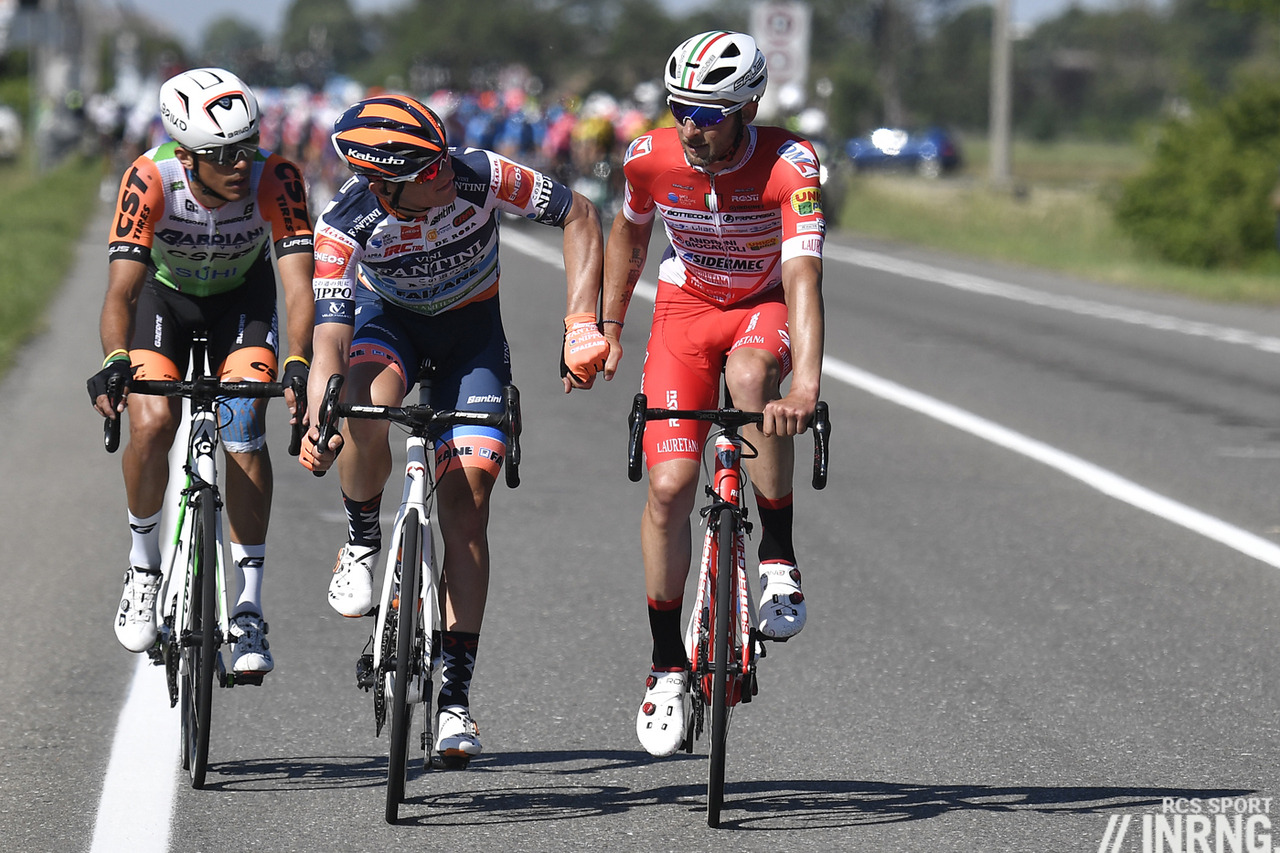 Ewan e basta: a breakaway including Androni-Sidermec’s Marco Frapporti’s who’s racked up over 800km off the front so far. Caleb Ewan won the sprint, his second win. It was a straightforward sprint with Ewan having the best combo of speed and timing. There’s still once chance for the sprinters with Stage 18’s flat finish in Santa Maria di Sala but how many will haul themselves over the Alps remains to be seen, Elia Viviani told RAI TV yesterday “my Giro is finished” and he’s off home. Arnaud Démare now has the points jersey and isn’t averse to the mountains, he even went on holiday to the Alps last summer because he enjoys tackling the passes at his own pace, something that helped him avoid the time cut when others got cut but if there are fewer sprinters the grupetto will be smaller too. 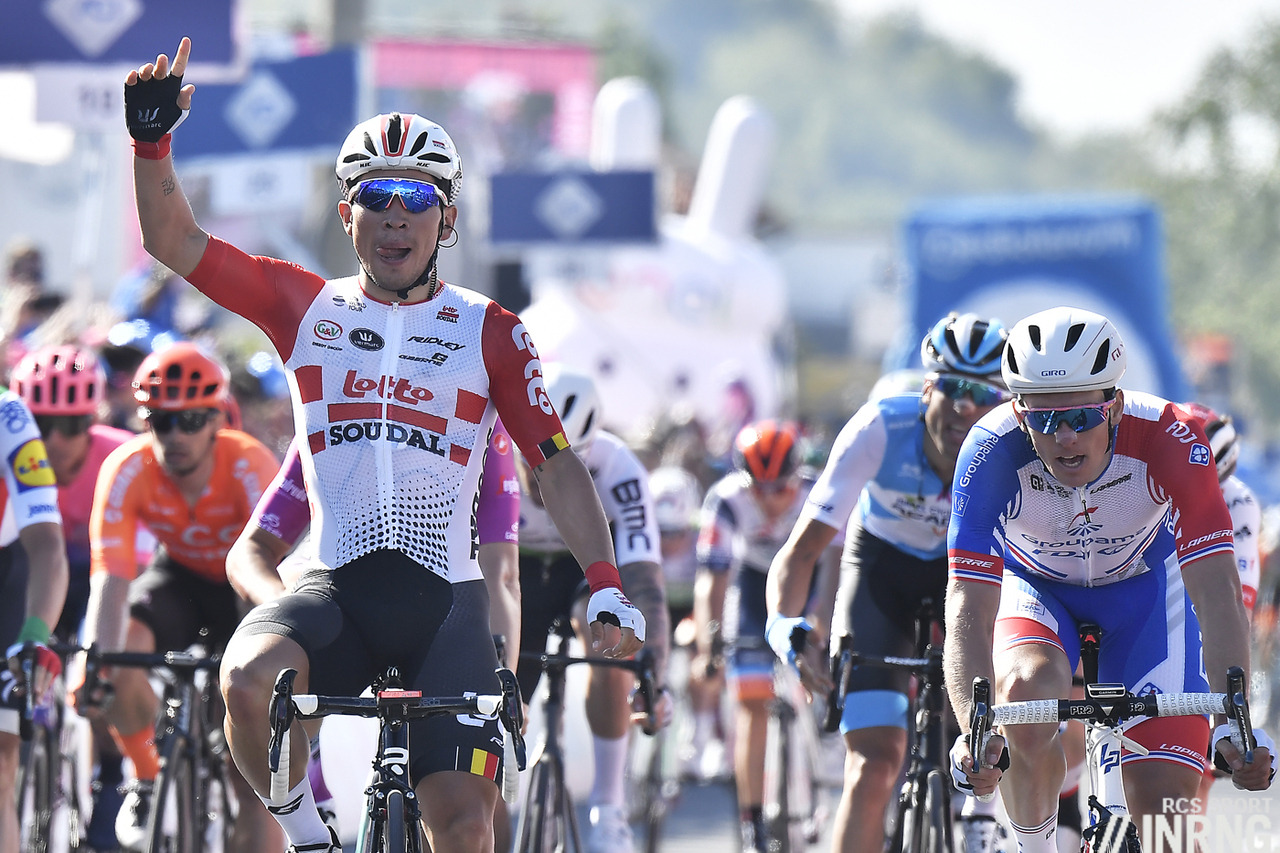 The Route: 158km between Cuneo and Pinerolo, notionally to celebrate Fausto Coppi’s raid in the 1949 Giro between these two towns but the stage doesn’t copy the legendary route via the mountains. It’s like recreating Eddy Merckx’s famous Luchon-Morenx Tour de France stage by riding the autoroute rather than crossing the Pyrenees. Still it’s a good way to ease into the mountains.

It’s 87km to Pinerolo and here they tackle the steep, cobbled via Principi di Acaja “wall” which they’ll do again later. They head out for a loop. After crossing the Pellice river outside Bricherasio with 47km there’s a small unmarked climb before Bibiana and the Montoso climb. 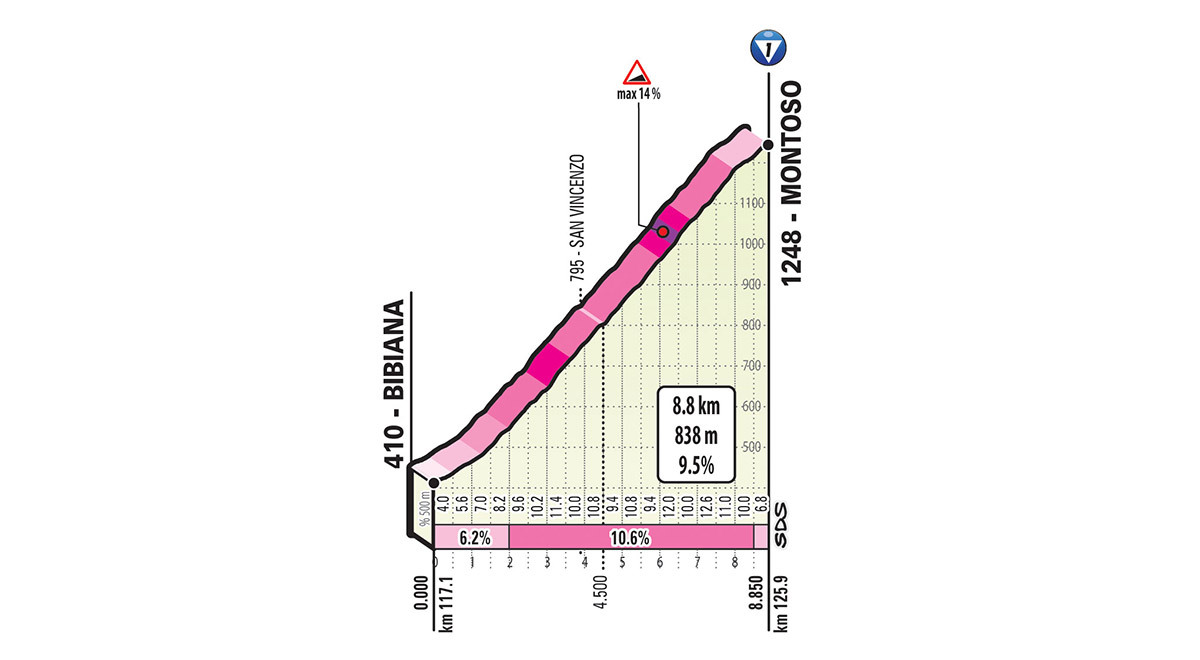 There’s a right turn in to a big wide road after and a gentle start of 3-4%. You can read more about Montoso in the full Roads to Ride piece but the summary version is that this is a surprisingly tough climb, 9.5% at 8.8km is hard, but top and tail the soft start and and flat ending you have have 7km at over 10% and with some sustained sections at 12% and one part at 14%, all on a small road hidden in chestnut woodland that has been partially repaired.

Across the top there’s a brief flat portion and then the descent is very different, it’s a high speed wide road with fresh tarmac, sweeping bends and lined with big crash barriers that give it the feel of a motor racing circuit. Once the descent is done there’s 22km to go across flat plains meaning it’s a long way for a lone ride or even a small group to stay away. 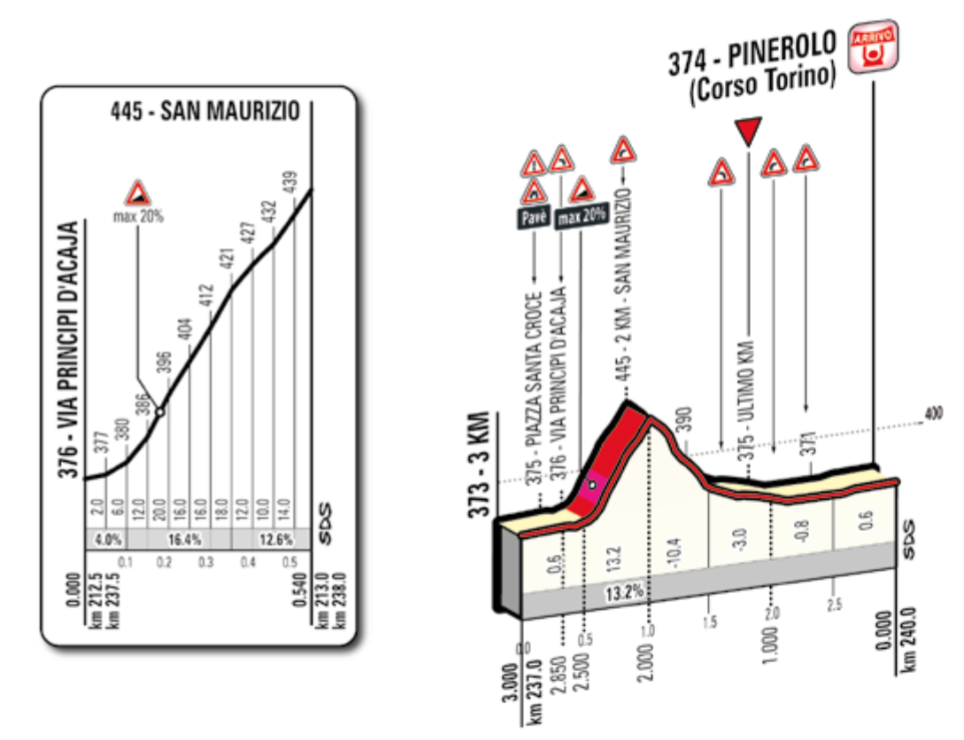 The Finish: they come into Pinerolo and scale the wall of the Via Principi d’Acaja again, it’s just 550m long but cobbled and there’s an early part at 20% to steal momentum. It’s the same finish as the Giro used for Stage 18 in 2016 when Matteo Trentin won.

The Contenders: a breakaway seems likely, UAE Emirates will try to protect Valerio Conti’s maglia rosa but they don’t look too imposing, there’s only so much they can do but perhaps this means Diego Ulissi can’t go in the breakaway? There are plenty of riders well down on GC who pose no threat, they just have to be suitable to get over the climb today so this weeds out some of the heavier candidates while other riders are on duty today for their GC leaders.

Prototype riders are Marco Canola (Nippo-Vini Fantini) who is a rare big talent outside of the World Tour teams but he’s also a rare winner; Androni-Sidermec have Andrea Vendrame and Fausto Masnada, Masnada is the better climber but Vendrame a light sprinter. Team Ineos are in the race and perhaps Eddie Dunbar is a pick for today with others waiting for the mountains? Not along ago Gianluca Brambilla (Trek-Segafredo) was second in Pinerolo but he’s not been the rider he once was while Giulio Ciccone could try, he’s a climber but packs a decent sprint. Tony Gallopin (Ag2r La Mondiale) has a second place already. Team Sunweb’s climbing pair Jai Hindley and Chris Hamilton could try too. Finally if the group has the wrong mix and things get brought back then Vincenzo Nibali and Primož Roglic could pop up for the win from a reduced group. Lastly Thomas de Gendt (Lotto-Soudal) is an obvious pick but he may be after the mountains jersey and if so today isn’t the day to go on a raid.

Weather: sunny and a pleasant 23°C.

TV: the finish is forecast for 5.15pm CEST / Euro time and they start the climb to Montoso at about 4.00pm. It’s on RAI in Italy, Eurosport across most of Europe and Australia, L’Equipe TV in France and Flobikes and Fubo.tv in the US.