Another day, another sprint? Yes but this is the last chance for the sprinters for a week and several could be heading home – possibly with flights booked already – after today. Still it’s a featureless stage and in order to avoid the boredom we can riff on parmesan cheese and invisible cows before reverting to the sprint picks and today’s weather. 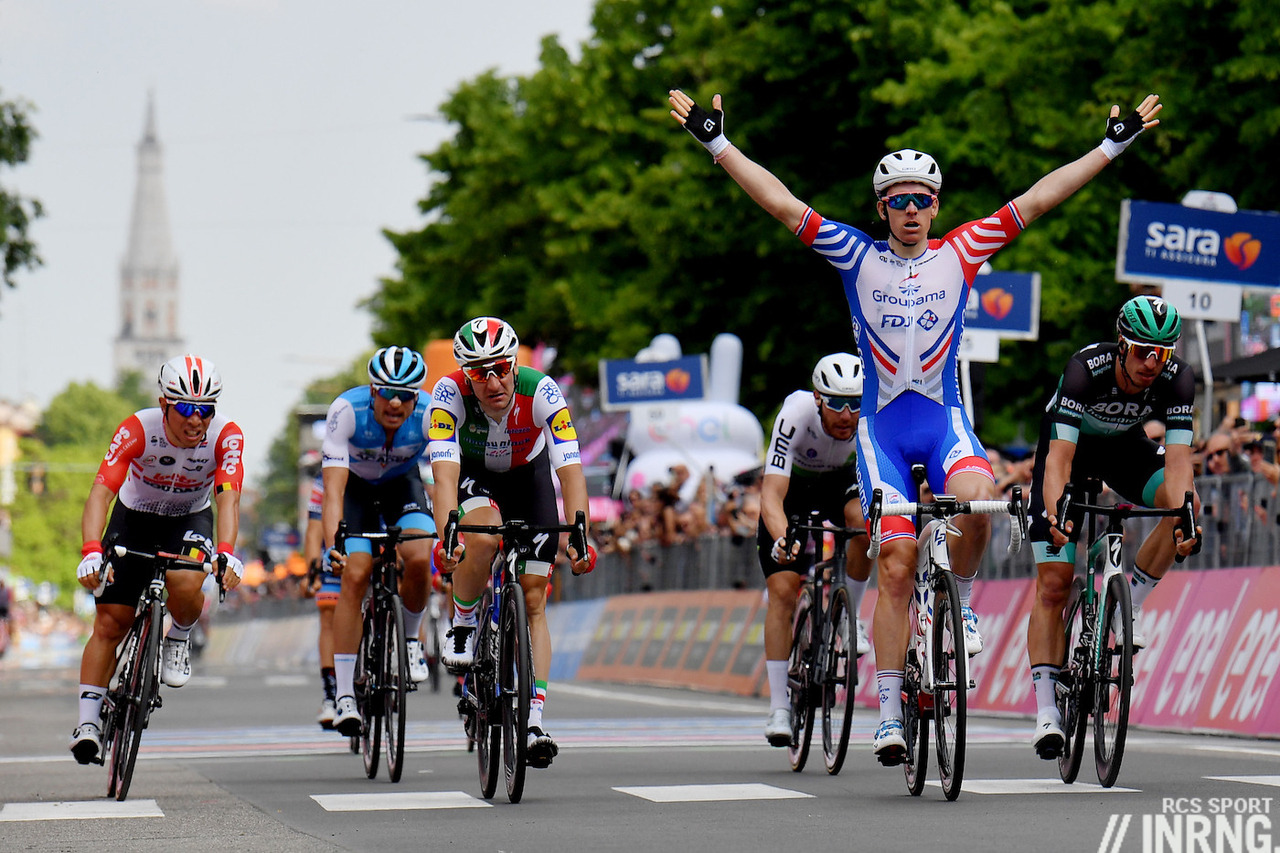 Yes Nono: a crash under the flamme rouge took out Pascal Ackermann who finished but with what the French call “pizza”, a blend of red and white shredded skin. We got a sprint win for Arnaud Démare and now four of the “big five” sprinters in the race have won a stage… except for Elia Viviani, which isn’t what he and his special tricolore jersey came for. It’s an important win for Démare because he hadn’t won a thing all season and had a classics campaign to forget, plus it had Marc Madiot bouncing on his sofa.

The Route: 221km across the Plains of the Po valley but crucially it visits several cities along the way like Reggio, Parma and Piacenza, this is the race’s chance to meet an urban population. Otherwise there’s not much to write home about, there are no climbs to trouble the sprinters.

If the riders look up to their left today they’ll see hills, the Apennines. It’s from here that Parmigiano Reggiano cheese comes from, only ride in the hills them and it’s near impossible to find a cow. There are grassy fields and roads are busy with small tanker trucks ferrying milk from the dairies, but rarely a grazing beast. Instead the cattle are out of sight, they spend their lives indoors and grass is mown, dried and fed to them in the barn.

The Finish: out of town, amid retail units and industrial workshops, the finishing straight is 3km long. You might see the profile slope up at the end but it’s gradual, a slope of 0.65%.

The Contenders: no one sprinter is coming out on top and Elia Viviani (Deceuninck-Quickstep) is getting beat again and again but often only by a bike length so it’s our big four again. Caleb Ewan (Lotto-Soudal) is close, Arnaud Démare (Groupama-FDJ) will enjoy the dragstrip finish here again. The question is over Pascal Ackermann (Bora-Hansgrohe) who looked like he’d landed on a cheese grater yesterday and if he crossed the line he’ll be very sore, probably didn’t sleep well and will find 221km hard going.

Weather: sunshine and clouds, 21°C and a light crosswind of 10-20km/h from the south.

TV: the finish is forecast for 5.15pm CEST / Euro time and you probably won’t miss much if you tune in with 4km to go. It’s on RAI in Italy, Eurosport across most of Europe and Australia, L’Equipe TV in France and Flobikes and Fubo.tv in the US.