A midweek race with a famous finish, it’s a bunch sprint for climbers. 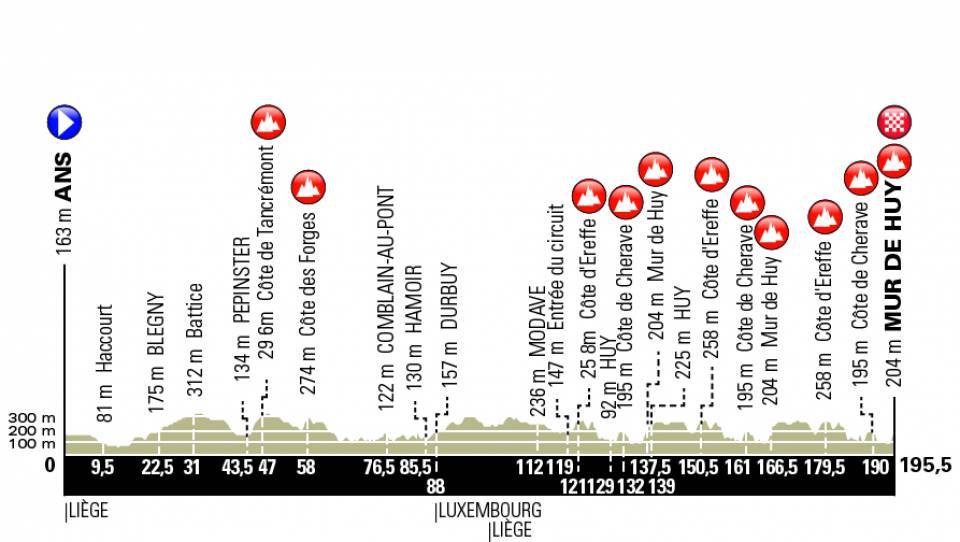 The Route: 195.5km and that wall. It’s a 197km warm-up and then the world hill climb championships. After a start in Ans to salute the town that used to host the finish of Liège-Bastogne-Liège the race heads loops across some of this Sunday’s Liège-Bastogne-Liège route before heading west to Huy. The Mur de Huy is tackled three times (58km to go, 29km to and the finish). When they go up with 29km to go watch to see who looks at ease and who looks flustered as these small clues often reveal what happens later. Crucially the section after the Mur runs south-east and it’s on a plateau which means it’s perpendicular to the forecast crosswind (see forecast below) and exposed to the wind. This could be an interesting section where weaker riders or sleepy teams could be eliminated.

The Côte de Cherave is becoming a fixture. Introduction in 2015 it’s just 5.5km from the finish and 1.3km at 8% average but mostly over 10%. It’s steep, the kind where you see the gradient illustrated by the way each house is higher than the next. But it’s a wide, straight road so moves are easy to gauge.

The Finish: 1.3km at 9.6%, the Mur de Huy doesn’t sound like much. But beware the average as this climb starts off slow when riders pass under the flamme rouge and then rises up. Take the inside on one of the corners and the slope reaches 26% and if you have the luxury of choosing your line then it is only 19%… but longer. The road is very narrow so few get to pick their line.

Riders use gears like 39×27 or 36×25 which is low for a 1.3km climb. Once you reach the last 300m the gradient eases up and some have been known to deploy the big ring for the final sprint. The effort is huge and requires maximal effort but also supreme restraint, ideally you want to be the first to surge clear as the road levels out but to leave this effort as late as possible. It’s all about timing and momentum as to accelerate on the steep parts requires a big increase in force and if you launch too early and you will blow. But if you cannot follow the leaders then it’s unlikely you’ll make up for lost ground.

Julian Alaphilippe won last year but partly by accident, he thought there was another rider up the road. Still he’s the prototype rider and his form is fine after the high speed crash in the Tour of the Basque Country. This week is all about Liège for him, apparently he did a hard training ride last Friday which he knew would compromise his performance in the Amstel but here’s a chance to make amends for getting burned under the flamme rouge last Sunday. Deceuninck-Quickstep bring the climbers including Enric Mas but experience counts for so much on this climb and Alaphilippe is their ace card. Alejandro Valverde (Movistar) isn’t short of experience but perhaps he’s starting to have too much of it? He’d won this race four years in a row but got relegated to second last year and crucially went missing in last Sunday’s Amstel. Simply put he’s having his worst start to the season in years.

Dan Martin (UAE Emirates) has been on the podium here before but how to win? He’s just come out of a strong Tour of the Basque Country and excels in steep finishes like this. Rui Costa, Tadej Pogačar and Diego Ulissi are other cards to play but the Mur is too intense to fire riders up the road in early attacks.

Michael Woods is the new Dan Martin for EF Education First, he thrives on the steep climbs. He went supernova in the Amstel but that was after he had made one too many efforts, today if he can be guided into position over the climbs then the finish suits him.

Max Schachmann leads Bora-Hansgrohe, they bring Peter Sagan and a bunch of climbers but Schachmann seems their best piece to play.

Michał Kwiatkowski (Team Sky) is in form but the Mur might be a touch too much for him, too short and too steep but if he’s in the mix for the top-5 then a good day and a well timed surge and he’s there, a notion that obviously appeals to many.

Adam Yates (Mitchelton-Scott) is the outsider, normally a prototype rider for today given his climbing and quick finish but he’s not got the experience here.

Jelle Vanenedert (Lotto-Soudal) appeared on the Cauberg last summer like a rare flower that only blooms in the Ardennes for one week and this is his chance again, a good shot for a top-10 but a win feels elusive while team mate Bjorg Lambrecht is a fearless second year pro, probably still on an apprenticeship but his tiny build and punchy style is ideal for this race and he’s in form. Tim Wellens rides too but might go for an attack rather than wait for the sprint.

Finally Dylan Teuns (Bahrain-Merida) is good in uphill finishes and grew up nearby but tends to finishes close rather than win outright. Michael Matthews (Team Sunweb) has placed here proving his versatility but it’s hard to see him surging past the best; a similar but inverse story for Romain Bardet (Ag2r La Mondiale) who loves racing in the Ardennes but the climb isn’t long enough. Groupama-FDJ’s David Gaudu had his breakthrough here in 2017 with a top-10 finish and if he’s progressing he’s not winning much. Enrico Gasparotto is Dimension Data’s best hope of a result, perhaps even a top-10 would be a relief for them. Astana return with a strong team and Jacob Fuglsang but this one climb is too much for him.

Weather: mild but cloudy, 22°C and with the wind blowing from the south, it could reach 35-40k/h which can split things up.

TV: the finish is forecast for 4.25pm CEST and they’ll go up the Mur for the penultimate time around 3.40pm, tune in before then to see who is floating and who is struggling.

The women’s Flèche Wallonne finishes at 2.00pm and for a change neither Anna van der Breggen nor Annemiek van Vleuten are dividing up the wins between them, it’s potentially more open. The problem is it’s not on TV.

Previous post: The Moment The Amstel Gold Race Was Won