Beer, sunshine and big crowds for a bike race. The Amstel Gold Race a good formula even if it’s the young upstart of the spring classics in relative terms, having only begun in 1966. It marks the change from the flat classics to the hillier races and there’s a broad field with grand tour contenders tuning up for summer and cobbled classics specialists having a last hurrah. Here’s a race preview with the usual look at the course, contenders, TV times and more. 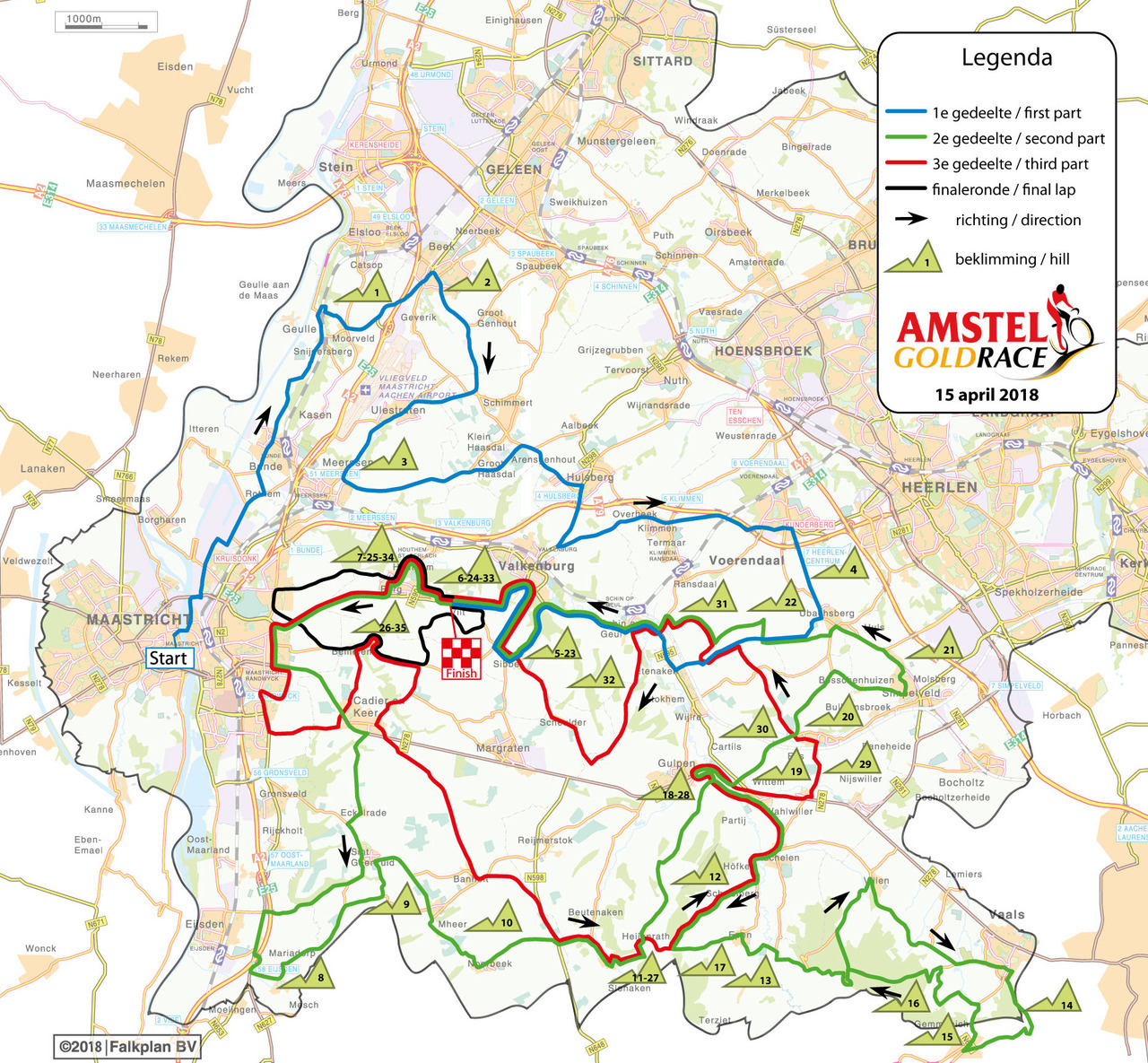 The Route: 267km 5km more than last year but otherwise the same which explains why the race website uses the same map from 2018. There’s about 3,500m of vertical gain, impressive for a day’s racing in the Netherlands. It’s all packed into a narrow area on a course that twists and turns so much it’s one of those days where the headset feels like an important component for once.

In total there are 35 climbs, albeit with some counted two or even three times. Many are not hard, typically a gradient of 5% for a kilometre although a few do have double-digit slopes and the Keutenberg, the nation’s steepest road, maxes at 22% and comes with 29km to go. If one hill climb is fine, 35 hill reps hurt. The vertical gain adds up but it’s the fight to be at the front that really takes its toll, these are narrow climbs that string out the field and the approach roads are often narrow and twisty. Anyone badly placed will waste energy trying to get back up and so they’ll start the next climb in a worse way and so begins the vicious cycle that ruins their chances. All this is harder still thanks to a course that looks like an open-air catalogue of street furniture and traffic calming measures.

The Finish: the old finish atop the Cauberg hill has long gone. They climb the Cauberg, ride on to the finish line and then do a final lap and dives in and out of small lanes, the idea is to string out what’s left of the race and encourage attacks. After returning to the main road they climb the Bemelerberg (1.3km at 3%, a brief moment at 6%) and turn off again after the top into the apple orchards, this road dips down and then rises at around 3% before they reach the main road. The finishing straight is 900 metres long and slightly downhill.

The Contenders
Another spring classic, another opportunity for Deceuninck-Quickstep. Past winner Philippe Gilbert returns but he’s not the “Phil” of old who could attack on the Cauberg and power to the win but neither is the course the same, the flatter finish could still suit him. But Julian Alaphilippe is their best bet but not a certainty, a hard crash took him out of the Tour of the Basque Country and if he’s over the bruising it’s taken a toll in missed races. Still he can climb and sprint so he should be a factor in the race.

Mathieu van der Poel (Correndon-Circus) s the home pick, he’s been targeting this race to the point of saying non merci last autumn when ASO invited his team to ride Paris-Roubaix, preferring to focus on this race at home in a year when he’s the reigning national champion. He’ll be roared on by a giant crowd and has just what it takes to win, he’s explosive on repeat climbs and on his day can win bunch sprints so he can win out of a sizeable group. Distance isn’t a problem as the Tour of Flanders showed and he’s just won the Brabantse Pijl. So far, so good but his versatility means he can spread himself too thin rather than stick to one plan and he’ll be heavily marked.

Wout van Aert leads Jumbo-Visma, if Van der Poel is a contender than surely “WVA” is too? He was impressive in Paris-Roubaix for his resilience but he’s not a proven contender on a hilly course like this, he’s been strong in the Strade Bianche but a few kilos heavier which may count against him here.

Michael Matthews is a safe pick for a sprint finish, he’s good out of a small group and leads Team Sunweb who, despite the German flag, are a Dutch team at heart and HQ.

Team Sky were arguably upstaged by their gimmicky Pinarello frame which probably got more coverage last weekend than their rider,  but now they’re on terrain that suits them much more. Wout Poels is a local but form unknown while Michał Kwiatkowski is a past winner and normally a strong pick but had a hard crash in the Basque Country, the same high speed crash as Alaphilippe and this is his first race back.

On paper every Astana rider but one can win with Laurens De Vreese on domestique duty. Alexey Lutsenko is versatile and won the U23 world championships on these roads, Omar Fraile is a strong and clever rider but Jacob Fuglsang sits higher in the hierarchy and is having a good season although he remains a very infrequent winner.

Alberto Bettiol is back in action for EF Education First and a decent pick but he’ll be heavily marked this time. Michael Woods is an outside pick too but the finish lacks a really intense climb for him and with the new Liège course his best bet might be next Wednesday’s Flèche Wallonne. Tim Wellens (Lotto-Soudal) used to attack a lot but not win, now he attacks and often wins. His problem though is that if he attacks late in the race he’s likely to be accompanied by riders who can beat him in the sprint. Watch out for Jelle Vanendert, a rider who is quiet for much of the year but often pops up for a strong result in the Amstel and the Ardennes week.

It’s Greg Van Avermaet’s last race of the spring classics season and if he’s weighed on races at times, he hasn’t shaped them except for the Omloop all those weeks ago and must be running on fumes by now. CCC team mate Patrick Bevin is a long range outsider, strong and with a handy sprint but it’s hard to see him surprising everyone else.

It’s crunch time for Peter Sagan, if he’s lost weight to contend in the Ardennes then we’ll see how his lighter build fares on the bergs. It’s a race he’s yet to win and the succession of climbs has been too much for him in the past and if he’s looked below par, he’s still a rider who can win when he’s at 90%. Bora-Hansgrohe are showing much more depth this year, once upon a time they resembled a pro conti team with Peter Sagan bolted on but now Max Schachmann can be a second card to play, he’s had an excellent Tour of the Basque Country but if that race has twisty climbs, the Amstel is more intense in places and he’s only ridden once before.

Alejandro Valverde (Movistar) has been on the podium three times but never the top step and if it sometimes seems like he never rusts, he’s not as quick the sprints these days so it’s not easy to win here. Carlos Betancur is back to winning ways in time for the Ardennes but only just.

Dimension Data return with three former winners of the race which is a neat anecdote but what they need is an antidote to the bad luck the team has been suffering from with more illness and injuries and so far their big signing for 2019, Michael Valgren, last year’s winner, has had one top-10 this season, a 10th place in February at that. Still Valgren is a smart and talented rider capable of surprise so don’t rule him out. It’s harder to see how Roman Kreuziger and Enrico Gasparotto win but they could place for a top-10 and helpful ranking points for a team looking over its shoulder and worrying if it’ll be overtaken by Cofidis and Israel Cycling Academy on the sporting rankings.

Finally Dylan Teuns leads for Bahrain-Merida with Matej Mohorič as a second option for the team. Ag2r La Mondiale have Romain Bardet, presumably preparing for Liège while Oliver Naesen climbs better than we might assume for a cobble-eater (remember Paris-Nice’s final stage?) and Benoît Cosnefroy just won Paris-Camember but he’s probably not gouda chance here. Katusha-Alpecin’s Nathan Haas has thrived here before but hasn’t raced for a month. Groupama-FDJ’s Valentin Madouas is impresssive this year, UAE-Emirates’s Diego Ulissi is coming into form but a long shot these days, Israel Academy’s Ben Hermans is a strong, powerful rider and Wanty-Gobert’s Odd Eiking is good for uphill finishes but the field is surely too deep for him. Last Daryl Impey leads for Mitchelton-Scott but how to beat all the riders above?

Weather: a sunny day and a top temperature of 24°C with a 10km/h breeze from the NE.

TV: the race starts at 10.30 CEST and the finish is forecast at 5.10pm. It’s on NOS in the Netherlands and then Eurosport across most of Europe and beyond.

Women’s Amstel: the women race between 10.50 and 2.30pm with the same finishing circuits as the man. If you’ve found a good preview share in the comments below and it can be added here. It’s on TV too in the Netherlands and beyond.

Next post: The Moment The Amstel Gold Race Was Won