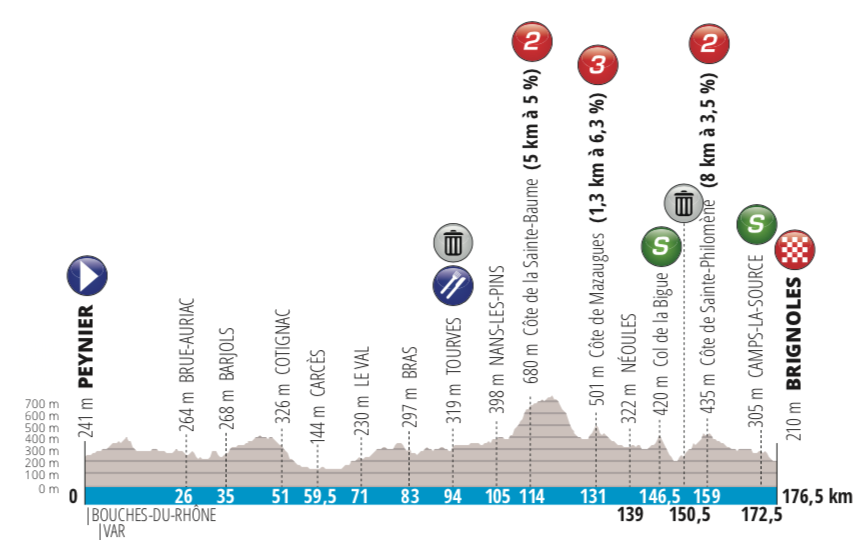 Breakaway or bunch sprint? A hilly route including some uncategorised climbs but 10 days out from Milan-Sanremo the kind of route that should encourage some sprinters and their teams to get to work. The sun’s shining but the race hasn’t escaped the crosswinds.

Pole position: Simon Yates won the stage if he’s not a time trial specialist he can hold his own, you imagined him in the top-10 but never the stage winner. Yes he benefited from easier conditions before the wind got up but so did others too, he was the fastest among others. He’s way down on GC but has got “his” stage and we have to go back to the Abu Dhabi Tour in February 2018 to find a stage race he started where he didn’t win a stage, a record comparable to Dylan Groenewegen’s run where he’s won a stage in every stage race he’s ridden after Paris-Nice 2017 as long as we exclude the Binck Bank Tour. The overall isn’t set in stone but Michał Kwiatkowski leads by 19 seconds on team mate Egan Bernal and if the Pole cracks on the Turini then Bernal has time on the rest, with the likes of Romain Bardet and Nairo Quintana well down already. Sky have both a real grip on the race, and a psychological one.

The Route: 176km across Provence and a little over 2,000m of vertical gain. With 30km to go the intermediate sprint is atop a small mountain pass but crucially it’s on a big wide road that is partially exposed to the forecast Mistral wind, a 3/4 tailwind here. Next the Côte de Sainte-Philomène is an 8km long drag upwards through the pine forests and it’s not the gradient, it’s the way the narrow, rough road twists all the time before more exposed roads.

The Finish: a rise for the late intermediate sprint and then another drag up soon after before the road dips into town and then it’s a flat final kilometre.

The Contenders: there’s a good chance of a sprint, this is terrain hilly enough to fatigue or even eject one or two sprinters which just opens the door further for Matteo Trentin (Mitchelton-Scott), Sonny Colbrelli (Bahrain-Merida), Sam Bennett (Bora-Hansgrohe) and Bryan Coquard (Vital Concept), all are quick and can cope with a climb or two, as can Caleb Ewan (Lotto-Soudal) who has a fitness test ahead of Sanremo.

As for the breakaway Thomas de Gendt (Lotto-Soudal) and Alessandro de Marchi (CCC) could try again, ditto Magnus Cort (Astana) but it’s probably easier to list off the names of those who won’t try their chances today because today is The Breakaway Stage and this is the sprinter’s teams’ biggest problem, that there’s a scrap to get in the move and some horsepower gets up the road.

Weather: sunshine and 21°C, the race has reached the sunshine… but it hasn’t left the windy days behind as the Mistral will be up and the NW wind will blow at 30km/h and could gust to 60km/h.

TV: the finish is forecast for 4.30pm Euro time. It should be available on the same channel you watch the Tour de France and/or Eurosport. If not then cyclingfans and steephill.tv have schedules and streams.