“Don’t judge a book by its cover” goes the saying only the front of the UCI’s annual report and accounts for 2016 says plenty as features the men’s road race at the world championships in Doha, the concluding event of a very lucrative week for cycling’s governing body as the accounts show the Qataris paid far more than the usual amount to host the event.

The UCI’s annual report and accounts (PDF) came out on the eve of the Tour de France. The big race got the limelight, now it’s time to take a quick look at the sport’s governing body and its finances.

As a reminder the UCI is cycling’s governing body and it has eight primary activities road, track, mountain, BMX, para-cycling, cyclo-cross, indoor and trials… the last one being the test of balance rather than a proclivity to launch lawsuits. The UCI sets the rules for the sport but “governing body” implies a degree of authority it doesn’t always possess, especially in men’s road cycling as it has to juggle competing interests. All the numbers here are in Swiss Francs (CHF) because the governing body is based in Aigle, Switzerland – behind a retail park – and the exchange rate is mentioned below but for shorthand you can equate one Franc to one Euro or Dollar.

The three charts grabbed from the report illustrate the revenue by discipline, sector and type which gives a summary view of the sources of income and the changes between 2016 and 2015.

2016 was a great year financially for the UCI. Olympic years are lucrative because the Olympic Games generate payouts for the member bodies of the International Olympic Committee, including the UCI which oversees the road, track and mountain bike events. In the past the UCI has smoothed these payments across four years in their accounts, this time under new Swiss accounting rules they’ve recognised the full sum in one go. This means that the 2016 income statement shows the loot in full and the remaining years until Tokyo 2020 won’t have this. But the UCI promises to ring fence the money to spend over the four years. This helps explain how revenues have doubled in a year, here’s the table grabbed from the report:

Compared to 2015 you can see the big increase in the Olympic income for the accounting reasons explained above. The other big increase is the “hosting fees”. This means the World Championships. As loyal readers know every year the worlds are a vital income earner for the UCI and in particular the Road worlds. You might remember eyebrows being raised at Doha’s bid for the worlds in 2015 and talk that the Qataris paid a substantial premium for the privilege. The accounts appear to confirm this, there is no one figure but the sheikh-down is apparent in the accounts in more than one way. The first is the cold hard cash, the income from the road worlds in Doha generated almost 12 million Swiss Francs more in revenue than previous edition in Richmond, Virginia. That’s a lot but it’s revenue not profit, as the report notes “due to the relative lack of organisational resources locally, a significant part of the local organiser’s duties were contracted back to the UCI which in turn subcontracted to a third party” so rather than the Qataris fulfilling various duties the UCI billed them and paid others to do these things. This shows up in the accounts by an extra six million Francs of “logistics & event organisation”. Let’s hope the reports of 130 unpaid staff has been resolved.

Otherwise the lines are similar to the previous year so the summary story is a lot more revenue, some extra costs and this leads to a 21 million Franc surplus for the year. The UCI is a non-profit association under Swiss law and enjoys certain fiscal and legal advantages because of this, so the surplus is held in reserve for the following years.

The table above splits the revenue by activity and you can see how the road, essentially the world championships, and Olympics account for almost four fifths of the UCI’s income. Note the road “operating margin”, jargon for profit which is over 50%, a ratio the likes of ASO, RCS and Flanders Classics must crave.

Among the notes are various curiosities: UCI World Tour: The UCI gives accounts for it but the funding is controlled by a committee called the Professional Cycling Council which includes the UCI but also the teams, riders associations, race organisers and others. Here is the income statement for 2016: 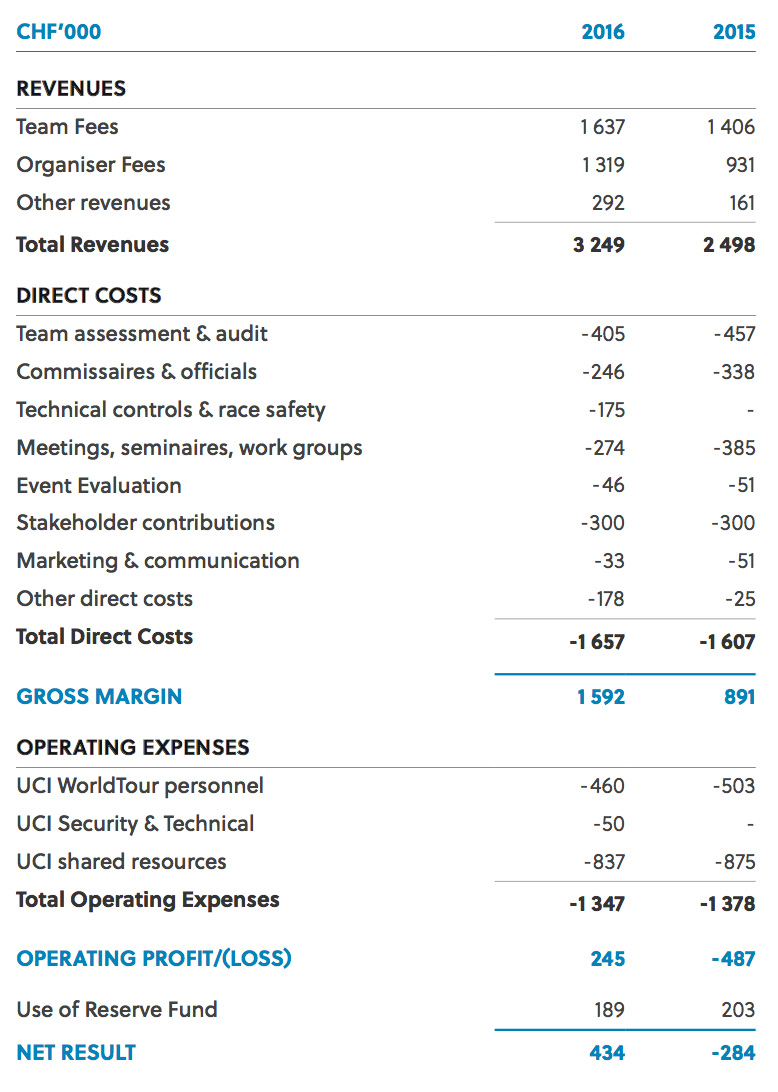 Note the total revenues of CHF 3.25 million for the World Tour. As much as the World Tour is the big shop window for the sport, note the UCI took CHF 22.3 million in revenue from the road Worlds. So while you might find the worlds to be a one week oddity conducted in national kit late in the season, for the UCI it is their single biggest source of income and dwarfs the entire World Tour. By implication the road worlds generate a lot of money which is used to fund many other areas in the sport from underwriting loss-making branches of the sport to funding development such as the World Cycling Center, the UCI’s trainee scheme where it brings athletes from around the world to its HQ in Aigle to race, as well as other satellite offices around the world.

As you can see the teams pay in CHF 1.6 million in licence fees which works out at around CHF 90,000 per World Tour team, again this is revenue and off this comes the annual audit of team finances to make sure they’re fit for the World Tour. They also pay in extra money for anti-doping. Race organisers are paying more, presumably events on the expanded calendar paying in advance. There are new lines for “technical controls and race safety” and “UCI security and technical” totalling CHF 225,000. Only CHF 33,000 is spent on marketing which helps explain why the calendar feels like a jumbled mess rather than a coherent “product”.

Note there’s no separate account of the UCI Womens World Tour, the notes mentioned they are included among the “other governance” line on page 91 of the report which also lumps in scanning bikes for motors and validating equipment from manufacture. The UCI is investing in the women’s calendar and helping events and contributing to media costs but the sums involved are not big enough to merit a separate break-down yet.

The finances are signed off by Jeremy Conrad-Pickles, another Briton. It seems as if many of the top jobs in the UCI have gone to people of the same nationality as the President (Martin Gibbs, Justin Abbott, Mark Barfield are all Britons). That said the staff breakdown is included in the report, the UCI employs 115 people, up from 111 last year and a majority, 61 people, are Swiss.

Conclusion
Glance at the UCI report and 2016 looks like a jackpot. It was thanks to the Doha worlds where the Qataris appear to have paid in excess of the usual amount. It might have been a week of largely forgettable racing but it will lives on in the UCI accounts and can hopefully fund development of riders, the calendar and other worthy initiatives for years to come. But the decision to book all the Olympic money in one go flatters the accounts compared to previous editions, as does the Doha worlds 2017 won’t look as good but the UCI has signed new media and sponsorship contracts which will help.