Michele Scarponi, a jester and the accidental winner of the 2011 Giro d’Italia, died on Saturday 22 April aged 37 following a collision with a truck on the outskirts of his home town of Filottrano.

Scarponi grew up in the agricultural town of Filottrano. His parents bought him a Bianchi bike to celebrate his first communion and he rose up the ranks, making the Italian national team as a junior. Like many from central and southern Italy Scarponi went north to make it as a pro. He joined the all-conquering Zalf team which has consistently supplied the pro ranks with many of Italy’s best; recent alumni include Gianni Moscon and Sonny Colbrelli.

Scarponi signed for the Acqua e Sapone team of Mario Cipollini and later told La Gazzetta Dello Sport’s Marco Pastonesi he felt out of place, like “Alice in Wonderland”. He saw for himself the two sides of Cipollini, the theatrical showman seen by the public and the more private professional athlete that was not so visible. It was something that Scarponi would mimic in his own way later on as a joker on television and an ascetic in training camps.

He was made for TV with his ready smile and wisecracks. This made him a regular invitee on RAI’s Giro d’Italia Processo alla Tappa post-stage show and sometimes when he wasn’t invited he’d still find his way in front of RAI’s cameras. Not for him dull “I’m taking it day by day” or “I’m feeling optimal and calm” robo-quotes. Instead it was like watching a lycra-clad Roberto Benigni in full flow, with jokes and self-mockery delivered in his nasal marchigiano accent, and above all his extrovert facial expressions. Not that you studied what he was doing, you’d just laugh along. Was he born this way? Certainly from his amateur days Scarponi was known as a joker and to scan the photo archives is to find hundreds of images of him smiling. Even when posing for official team photographs he’d look relaxed. 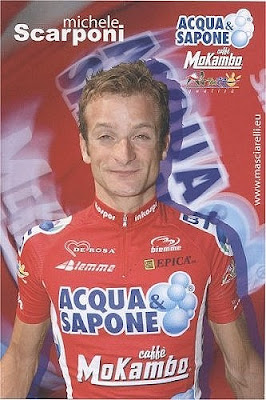 The jester role must have been precious inside the team bus for morale but may not have been apparent outside the Italian media until recently when via social media Scarponi filmed himself cycling with a Macaw parrot called Frankie. They both lived in the hilltop town of Filottrano and Frankie, “the parrot who thinks he’s a human” had become the darling of locals as he flew around town visiting bars for peanuts, sharing ice cream with children and accompanying local cyclists. The two seemed perfectly matched, the “Eagle of Filottrano” in his blue and yellow Astana kit and the parrot with his matching plumage.

So far so funny but doping has to be mentioned. He was twice banned and his past followed him like a ball and chain: to tweet the result of his win in the Tour of the Alps earlier this week was to receive sceptical responses. Scarponi, like many of his generation, was involved in scandal. After moving to the Liberty Seguros teams he was “Zapatero” amid the slapdash codenames used by Eufemiano Fuentes and his colleagues for their extensive doping network. With zapatero being a bootmaker in Spanish and scarponi meaning boots in Italian it didn’t take forensic science to make the connection. The standard tariff was two years but he got an 18 month ban after cooperating with the Italian authorities. He was banned again for three months in 2012 after admitting working with Michele Ferrari. This earned him possibly the unique label of being a client of the two most infamous doping doctors: anecdotally interesting but probably more the reflection of his career path than anything else. Hired for a Spanish team meant Fuentes, returning to Italy meant Ferrari where he and so many of his peers (Visconti, Pozzato et al) were linked. Scarponi was caught by a vast police wire tap operation that is still quietly playing out in the background today.

The irony is that Scarponi’s greatest result was the 2011 Giro d’Italia which owed itself to a doping ban. Alberto Contador’s positive test in the 2010 Tour de France eventually led to the Spaniard’s sanction but only after he’d won the 2011 Giro the following year. So when a backdated ban was imposed the runner-up was promoted as the winner. The title of Giro winner never seemed to stick to Scarponi, perhaps because he never got to celebrate the win but also because that second ban for working with Michele Ferrari appeared soon after. He didn’t fully embrace the status of Giro winner either, when he was awarded the Trofeo Senza Fine on the eve of the 2012 Giro he seemed embarrassed, saying he’d store the trophy in a team truck while he thought what do with it although he did start the prologue wearing the maglia rosa, the privilege of the previous year’s winner. Continuing well into his thirties Scarponi became a mountain lieutenant and was instrumental in Vincenzo Nibali’s resurgent triumph at the 2016 Giro d’Italia, a Saint Bernard in a blue jersey. Scarponi was up the road on the penultimate mountain stage to Risoul, taking the Cima Coppi prize after crossing the Colle dell’Agnello solo and the stage win was likely. But behind race leader Steven Kruijswijk crashed into a wall of snow on the descent and second place Esteban Chaves was on the ropes and Nibali stood to gain. Scarponi sat up with almost canine loyalty and waited for Nibali. Nibali later declared Scarponi “deserves a statue.”

He was due to play the support role in the Giro this year for Fabio Aru. Only Aru crashed in April, smashed his knee was ruled out of the Giro leaving Scarponi to fill the Sardinian’s boots. A big ask but things were looking bright, he won the opening stage of the Tour of the Alps and took the leader’s jersey and backstage he asked for a spare so he could gift one to each of his twin sons – before finishing fourth overall. He drove home on Friday night and shared a photo on social media of him with his two sons and their new jerseys.

Saturday morning saw two workers up early on a sunny spring morning in the Marche region of Italy. One was 37 years old and donned his sky blue Astana kit. The other was a 57 year old builder who climbed into his yellow Fiat Iveco truck. Scarponi set off on a recovery ride, taking the familiar road west out of Filottrano. The builder was driving to Filottrano. As Scarponi rode out of town the builder made a left turn, driving right across the cyclist’s path and killing him on the spot.

He leaves his wife Anna and two sons.