The 2017 calendar is out and the UCI has added more races to the World Tour with 10 events making up a total of 28 extra racing days on the prime calendar. In the coming days we’ll learn more about the qualitative aspect of the calendar with talk of the new events being treated as second grade additions but for now let’s look at the new calendar on a quantitative basis, how its numbers stack up.

New vs old
That’s six one day races, plus four stage races providing 22 days of racing, a total of 28 days extra on the World Tour calendar. This tilts the calendar slightly toward one day races which now comprise 12.8% of the race days, compared to 10.4% in 2016.

The chart above shows the calendar by month with the new and the old races. The addition of new events in February is welcome because it fills a gap. The World Tour would begin with a fanfare in Adelaide only to go back into hibernation until mid-March and Paris-Nice. This oddity has been resolved but only by the addition of two races in the Gulf which, while fierce races, are training races for the spring classics and seen as a means to an end but the debate about quality is for another day. For now note it’s said these new races won’t be compulsory nor will their ranking points count which tells us two things: first the additions to the calendar are not pari passu but structurally second rate events; second these details have leaked several times over which suggests the UCI doesn’t want to own them.

May is now the busiest month of the year with the Tour of California alongside the Giro d’Italia. These clashes are odd, for example imagine if Formula 1 staged the Monaco GP on the same weekend as the Brazilian GP. But cycling is different, the peloton large enough to cope with two races. Indeed streamline the calendar to avoid clashes and squads would surely slim too?

Still the clashes can be contentious. At the end of July there’s a clash between the Tour of Poland, the Clasica San Sebastian and the newly elevated Ride London Surrey Classic. With riders tired from the Tour de France there have been complaints from the teams about having to ride three races on the same weekend so it looks like the new events, like the British race, won’t be compulsory. One of the consequences of this was Velon’s deal with the British race – announced last week – and what the press release didn’t spell out was that the British race is likely to be paying the teams to take part and therefore guaranteeing the presence of the top teams. Presumably the reason why they applied for a World Tour licence in the first place? 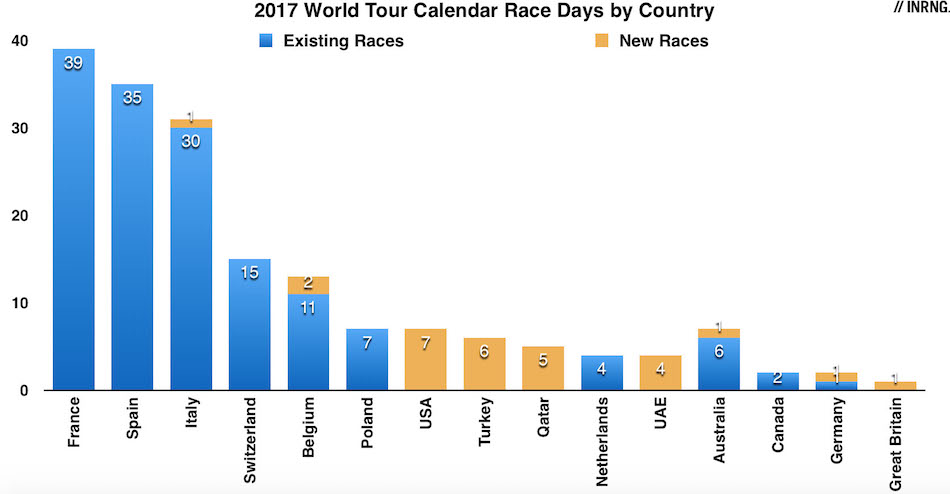 Cycling’s World Tour has had an air of baseball’s World Series given it’s hardly a global affair. As well as the two new Gulf races mentioned above, one headline change is the USA finally gets a World Tour race in the Tour of California so the sport is slowly spreading around the world. The new races to see the prime calendar reaching new parts of the world with the Tour of Turkey’s promotion too and the Ride London Surrey Classic. So five extra races in new places alongside awarding five races World Tour status in countries with existing races. Overall the picture remains very Euro centric, having a grand tour equates to a large slice of the calendar and other traditional cycling countries like Belgium and Switzerland get a large share too.

The calendar can’t be contorted into some global perfection to match, say, population levels or GDP with the corresponding number of races and race days. Cycling can reach plenty of markets via established races. For example the Tour de France has been shown on TV in the USA, Australia and Britain for years, it’s not necessary for a new race to build up the audience… although it can help. But the additions to the calendar seem more about who wanted to apply rather than a concerted strategy, for obvious races the Tour of California is a more valuable proposition than the Tour of Turkey.

Not big in Japan
As well as looking what’s there, spare a thought for what’s missing. Germany is still under-represented by some measures. Colombia would be a popular choice, it seems petty power squabbles are preventing new races there. Japan is due a World Tour race, it’s got passionate fans and represents a large target market for many bike brands such that teams without an obvious main sponsor interest in Japan, think FDJ or Movistar, could still be tempted in order to promote their subsidiary sponsors, especially bike suppliers.

Conclusion
The World Tour label is slowly gaining acceptance as the mark of a premium label. The new additions risk diluting this especially if it’s confirmed that the new World Tour is likely to be the two-tier system with compulsory, existing events and the secondary new races. More on this is due out later this week or soon after and for now we can glance at the proposed calendar and count the days and note the locations. In this aspect the February gap is filled and the USA gets a long-overdue race too. But these additions are still at the margins and the sport continues to revolve around its major events, notably the Tour de France.