The Criterium International’s been scrapped. It began in 1932 and has ended up homeless so owners ASO have pulled the plug.

But it’s been an itinerant race that’s moved from place to place over the years, once even in Algeria. In 2001 it moved to the Ardennes and icy starts in March and then Corsica from 2010 in one of those cross-selling deals that owners ASO do, an entry ticket ahead of the 2013 grand départ of the Tour de France. The Corsical deal was extended from 2014 to 2016 but now local politicians voted not to renew and so the race stops because there’s no where else to host it. A pity the politicians didn’t back the race, the island offers great cycling but the event never showcased the roads to their best. The name alone overlooked Corsica.

The race had its moments but had become as formulaic as algebra. The sprint stage and a time trial stage on the Saturday were not required viewing and then Sunday’s summit finish selected the winner after a long slog of a climb that was hard but not too steep so it suited the strongest team in the race. Thibaut Pinot won the last edition ahead of Pierre Latour and Sam Oomen, a podium full of promise while poor Daan Myngheer suffered a heart attack and died the following week.

Anyone sad at the loss to the calendar might be cheered at the news that the Tro Bro Leon race is already interested in taking up the late March slot on the calendar.

“Farce in Liège”
If Corsican politicians have said non to cycle sport then local politicians elsewhere are busy spending money. “Farce in Liège” says Het Nieuwsblad’s headline and reports the Tour de France will visit the city in July and the proposed finishing straight has just been narrowed of late for traffic calming. Only it now requires €300,000 of works to widen it again for the race. A joke? Perhaps but it’s always good to see a proper city finish rather than having finish out by a sports stadium or industrial park, this seems a small price to pay to show off the city. 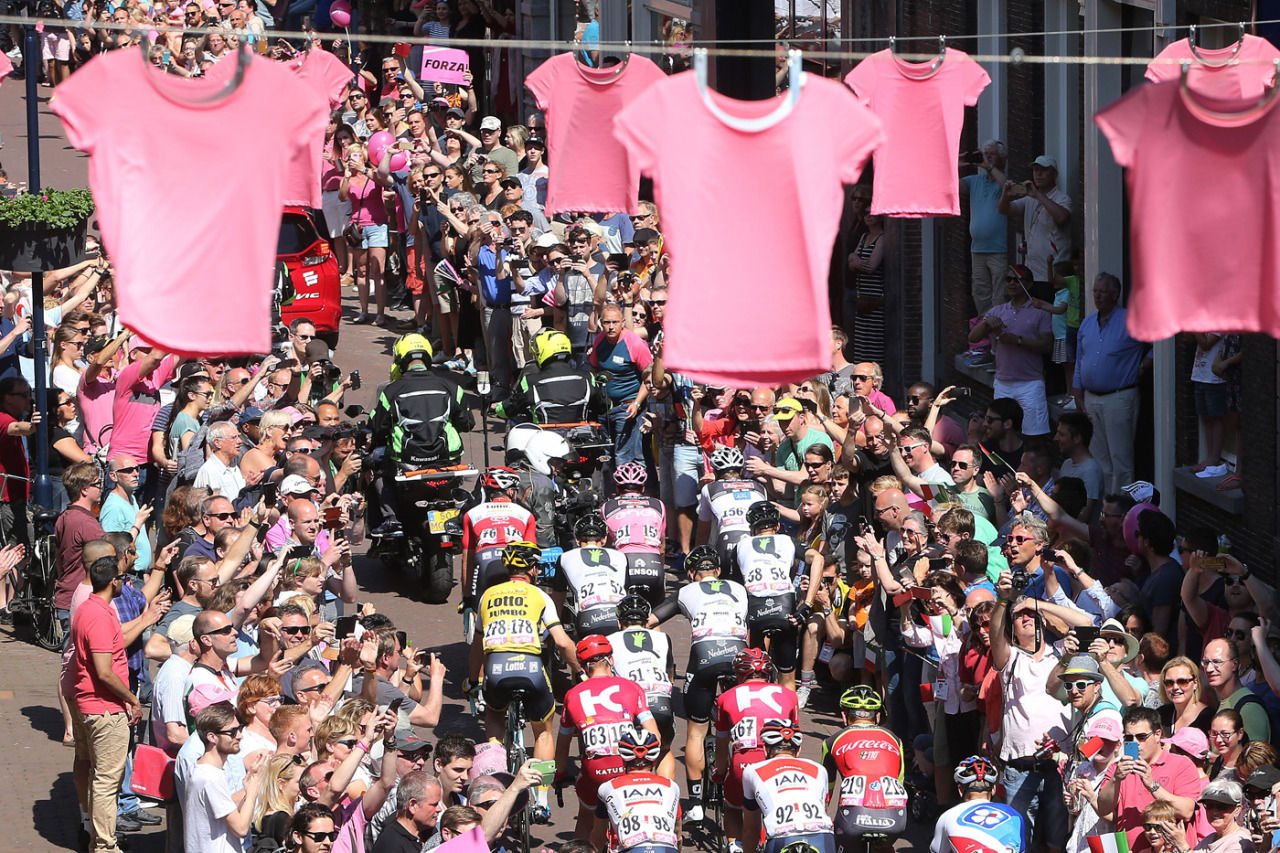 Guilder-land: Talking of headlines and cost-benefit analysis for bike races, it helps to have some data to hand for these things and the Giro’s Gelderland grande partenza has been subject to analysis (Dutch PDFs here). The report states the Giro cost €12,462,000 and they had an income of €12,097,000 so therefore the Giro’s visit ran at a loss and its generated negative headlines. Only the income minus cost calculation really means the event ran close to budget, it doesn’t include all the intangible things such as hundreds of thousands of people enjoying the free show (nor those counting the cost of being stuck in traffic because of closed roads).

London calling
Maybe a grand tour in Britain is more profitable than a Dutch one? You might have seen the pictures of Rouleur’s “Classic”, you might even have taken part. If not then it’s part trade exhibition, part festival of cycling culture with talks from various people in and around the sport and some teams even used it to unveil their 2017 team kit. Meanwhile this week Assos, the Swiss clothing firm that’s been bought by US investors, is opening a store on London’s swank Regent Street and there’s already a Pinarello store on the very same street. It’s curious London has events like this and these flagship shops are opening too when the likes of Paris or Milan don’t get them, nor cycle-mad Belgium. Custom clothing?
London’s Savile Row is just a short ride away from the Assos store. Why is there no custom cycle clothing? Not the custom kit as in putting your own design or logo but the tailored kind. A lot of team-issue kit is made to measure because the usual XS-S-M-L-XL sizing isn’t great for the pro cyclist’s skeletal morphology. Similarly Le Coq Sportif has offered a fitting service during the Tour de France (pictured). In both cases the manufacturers want the kit to look perfect so it’s tailored to suit. Granted a lot of ordinary customers are happy with the standard size range but some are not and there’s already a supply of custom shoes, frames and so on.

Get together: sizing up riders for their race clothing is one of the jobs done at the moment as teams gather for pre-season camps. Ag2r La Mondiale have finished their camp in the Alps and there was almost no cycling save for some indoor trainer sessions for those bound for the Tour Down Under. As well as taking measurements for gear there’s team building including initiation rites such as having to stand up and sing a song in front of everyone, possibly in costume. There’s serious stuff too, seminars from sponsors on the team issue products so the riders and staff can use and promote the gear and perhaps a session on social media with some dos and donts. As well as welcoming the new riders it’s a rare chance to get everyone together, a pro team is really two or more teams with climbers and stage racers going one way and classics riders and sprinters another during the season. It’s possible for some team mates never to see each other again until next year.

Old and new: one oddity at these camps that still persists is the sight of riders still in their “old” team kit. The sport is still structured that contracts must run from 1 January to 31 December but this means riders moving to a new team have to wear and use what they’ve been given for 2016 right up until the end of the year. But meanwhile they’re attending team camps and training for races they’ll do with their new employer. Why not move the contractual period to 1 November – 31 October?