The Moment Il Lombardia Was Won 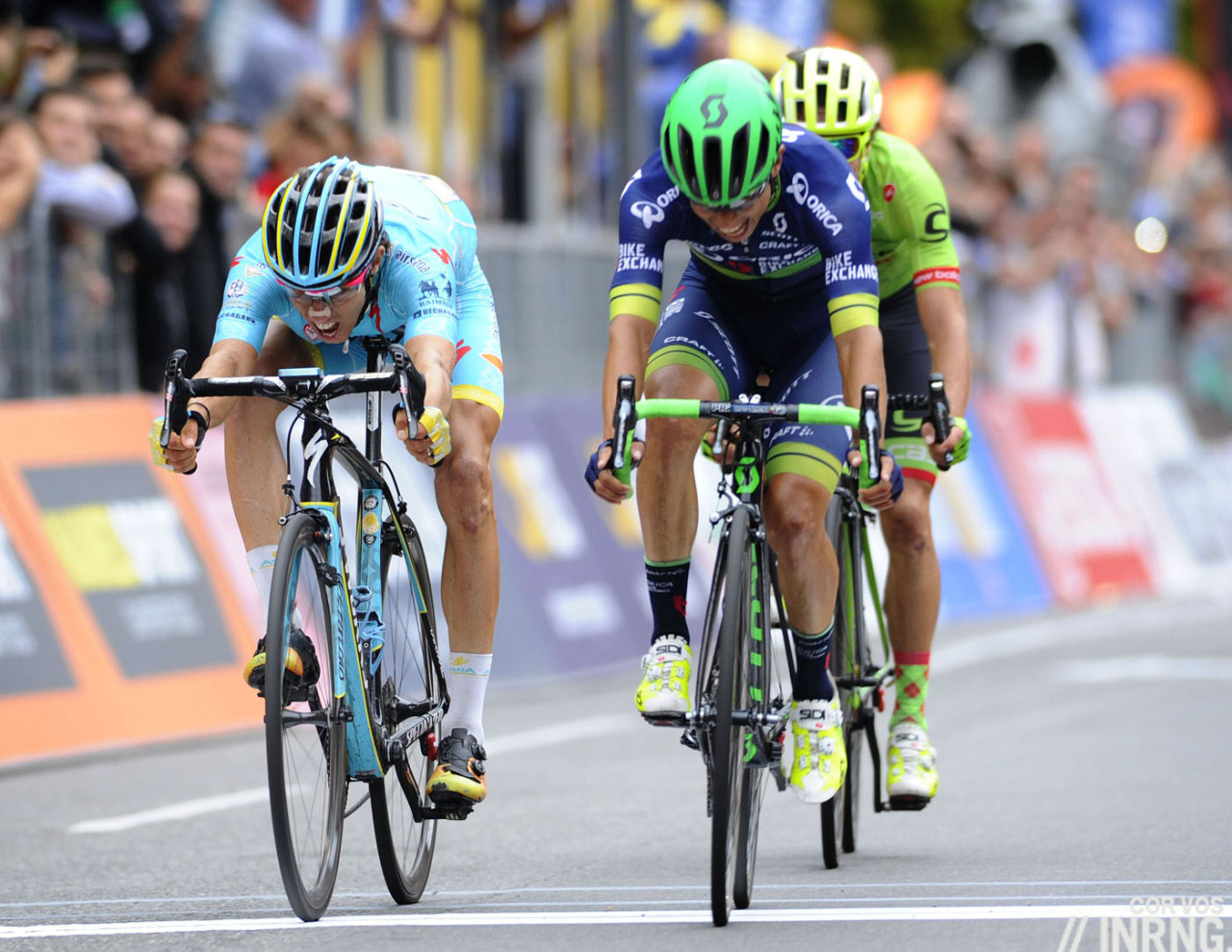 A sprint among three climbers? After 240km this could never be a dragstrip contest but Esteban Chaves still had the jump in the closing metres to surge past Diego Rosa and win the Tour of Lombardy.

A fast start and it took some time for a breakaway to go. Sonny Colbrelli had a go, as if to mark his presence in the race but the course was too hilly. Instead a move of more climbing lieutenants went clear with Damiano Caruso (BMC Racing), Stefan Denifl (IAM Cycling), Mikaël Cherel (AG2R-La Mondiale) and Rudy Molard (Cofidis) and enjoyed the privilege of riding past the Madonna del Ghisallo chapel as its bells rang out. 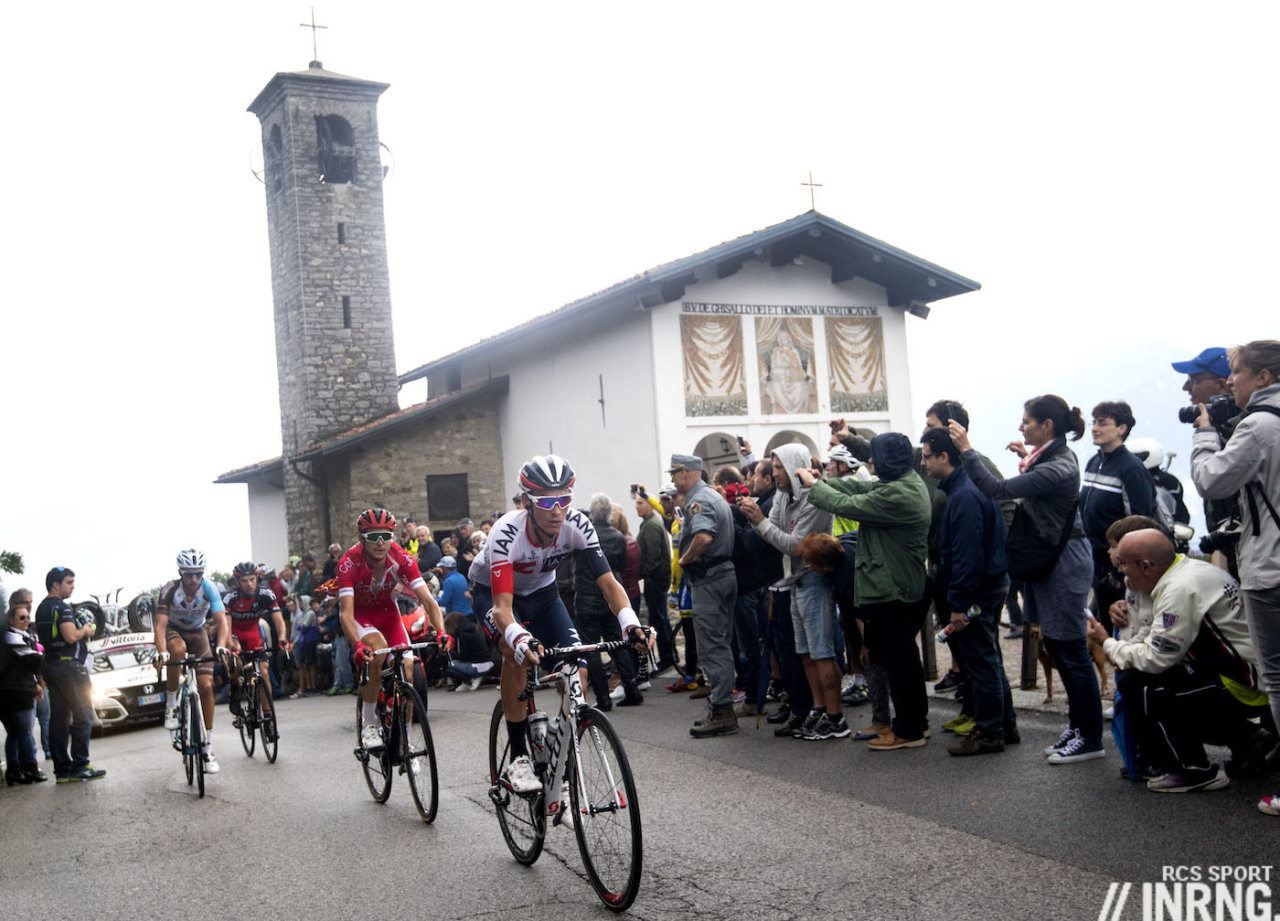 The Valcava is a full Alpine climb and was enough to separate the four homogenous breakaway riders with Denifl and Cherel getting dropped. There was still 100km to go but the race had the feel of a pot that was starting to boil even most of the action was happening at the back of the bunch. On TV RAI’s Andrea de Luca was riding behind the group and rattling off the names of those dropped on the small Berbenno climb and then abandoning hope, appropriately enough, on the road to Sant’Antonio Abbandonato. By now the pot was boiling so much that close to three quarters of the starting field earlier in Como had evaporated from contention. A flurry of attacks followed with Movistar on manoeuvres as Giovanni Visconti tried a move to soften the field for his leader Alejandro Valverde. Esteban Chaves and Rigoberto Uran jumped, Romain Bardet gave chase. Robert Gesink launched a move too that teased apart more climbers from the rest. This was a fluid moment in the race as the composition of the peloton group was constantly changing on this climb and the next of the Miragolo San Salvatore where sole survivor Damiano Caruso was finally reeled in. Someone would attack, others would chase and more rest would slowly winch back only each time minus a few riders.

Onto the climb to Selvino, notionally the easiest of the five successive climbs but its place as the final climb meant most were tired and any climbers with energy left had to use it now or get stomped on in the sprint. Here Chaves attacked so hard few could follow. He’d won the GP dell’Emilia the previous weekend, reportedly taming the slopes to the San Luca basilica in the big ring, a feat not seen since 90s wunderkind Jan Ullrich bench-pressed his way up. Just as Chaves beat Bardet the previous weekend the Frenchman was again in close attendence, his bamboo-shoot legs whipping the pedals as he got across with Rigoberto Uran, his face crumpling with the effort. This was a bold move with 35km to go: three climbers trying to ride away from a larger group of 15 riders. But it was the selection of the day, at least until Diego Rosa bridged across. The Astana rider had tried to close the gap for his leader Fabio Aru switched tactics and went solo. Lèse-majesté? Probably but Aru has been playing catch-up all year and the corners of his large mouth were bending into a frown. Meanwhile Rosa’s stock has been rising making him a recruitment target for several big teams with Team Sky cited most often.

Rosa eventually got across. In straight of arithmetic this meant one of the lead trio was likely to fall off the podium but the calculus was more complex. Now with an Astana leader in the move there would be no chase from them, by absorbing Rosa the leaders would not have to worry about him being tasked with the chasing them to try and set up Fabio Aru. Similarly Ag2r’s Pierre Latour and Cannondale’s Davide Vilella were able to sit on in the chase group behind too. 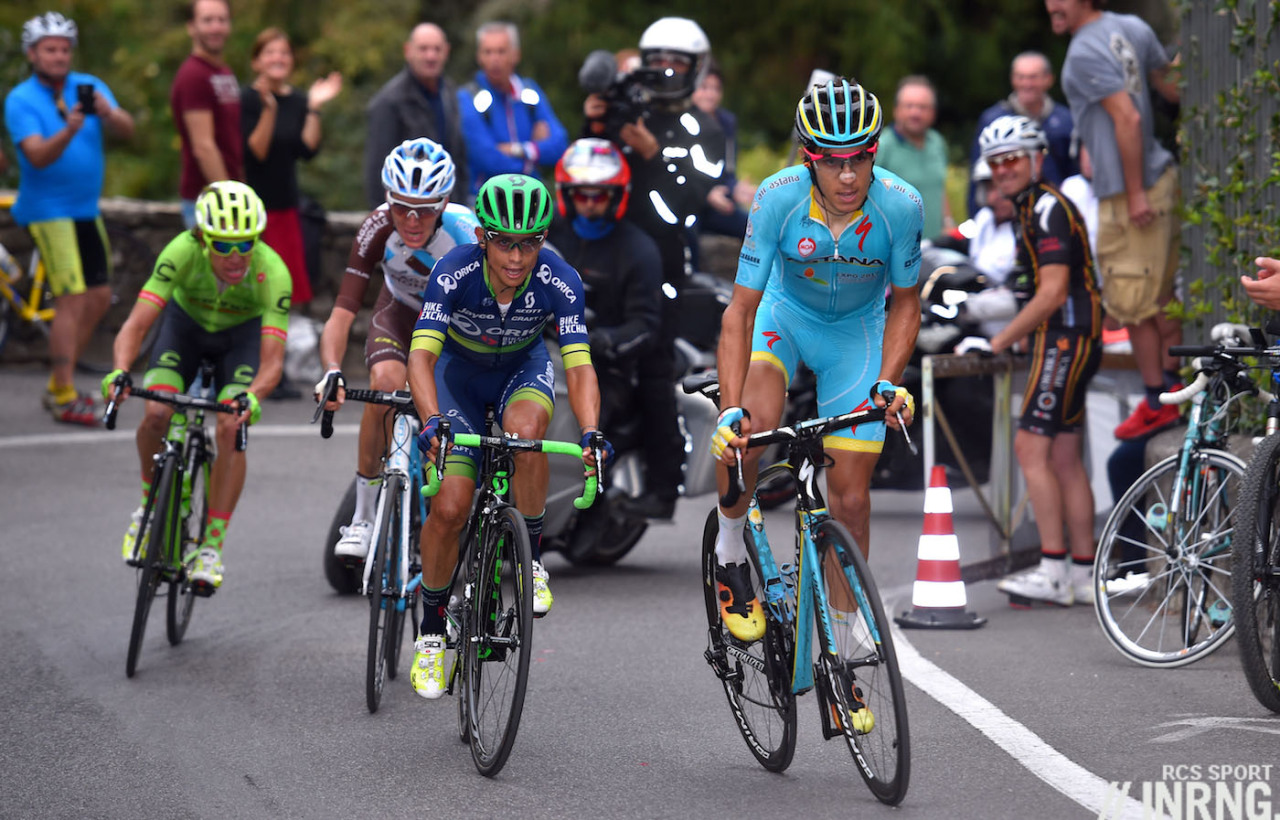 The quartet had a lead over the top of the final climb but weren’t settling in to work together. Bardet was happy to push the pace to help stay away and Uran briefly seemed to struggle to stay with them. With the descent out of the way Chaves was the only rider without a team mate behind but all knew this was their chance and that soft-pedalling in the name of a team mate behind was risky if not ruinous. Aru was not a strong card for Rosa to play, ditto Vilella for Uran and Latour for Bardet. So all cooperated. The TV time check said the gap was below 20 seconds but manual timings suggested it was still a comfortable fifty seconds. Enough to know that sharing the work would bring a reward. As they took the ancient road up to Bergamo’s citadel Rosa was the first to attack. It was lively but what was it going to deliver? Did Rosa think he could simply ride away from the trio or did he think he stood no chance in the sprint? He was reeled in and countered by Chaves. At this point Bardet cramped up meaning the lead trio were guaranteed a podium finish, the win was the goal but failure became that bit less costly. But who would win? Uran seemed to be the rider happiest to play the sprint card; or was it the only card left as he was too tired to launch attacks? Rosa had another dig but with hindsight this only buried his chances. As they rounded the final bend Rosa again launched the sprint but there was a long way to go and Chaves sat tight behind until a late surge saw him pip Rosa on the line. The Verdict
A good race with long range attacks and a result that wasn’t certain until Chaves lit up the fading light of an autumnal day with his beaming smile. The course worked, the fear was that the flat run to Bergamo would scare the climbers from launching their moves but the five climb arpeggio was so selective that a winning four rider breakaway could be made with 35km to go.

With Chaves it meant the first Colombian winner of a Monument classic and the first non-European to win Lombardia; his win helped Colombia top the UCI World Tour when ranked by nations. But Chaves is also a local too, when he joined the Colombia-Coldeportes team he along with many other team mates were housed in and around Bergamo and he speaks fluent Italian.

Rosa was potentially the strongest in the race but rather than keeping this sub rosa he showed again and again. He spent some time working for Aru by leading the chase. Soon after he decided to bridge across the the Chaves-Uran-Bardet group and managed it. He then launched a big move in Bergamo but got pulled in and if was in tears at the finish Astana team manager Guiseppe Martinelli was raging at Rosa’s generosity. Meanwhile Uran was close and we can only imagine the tension in the team car given Cannondale have not won a World Tour race all year but were in with a chance of one and a Monument no less.

The leaves have yet to fall in Lombardy but the race ends with the feeling of a season that’s beginning to end. The remaining events are for the sprinters, whether Paris-Tours next weekend or the World Championships the weekend after, making this the last hurrah for the climbers. 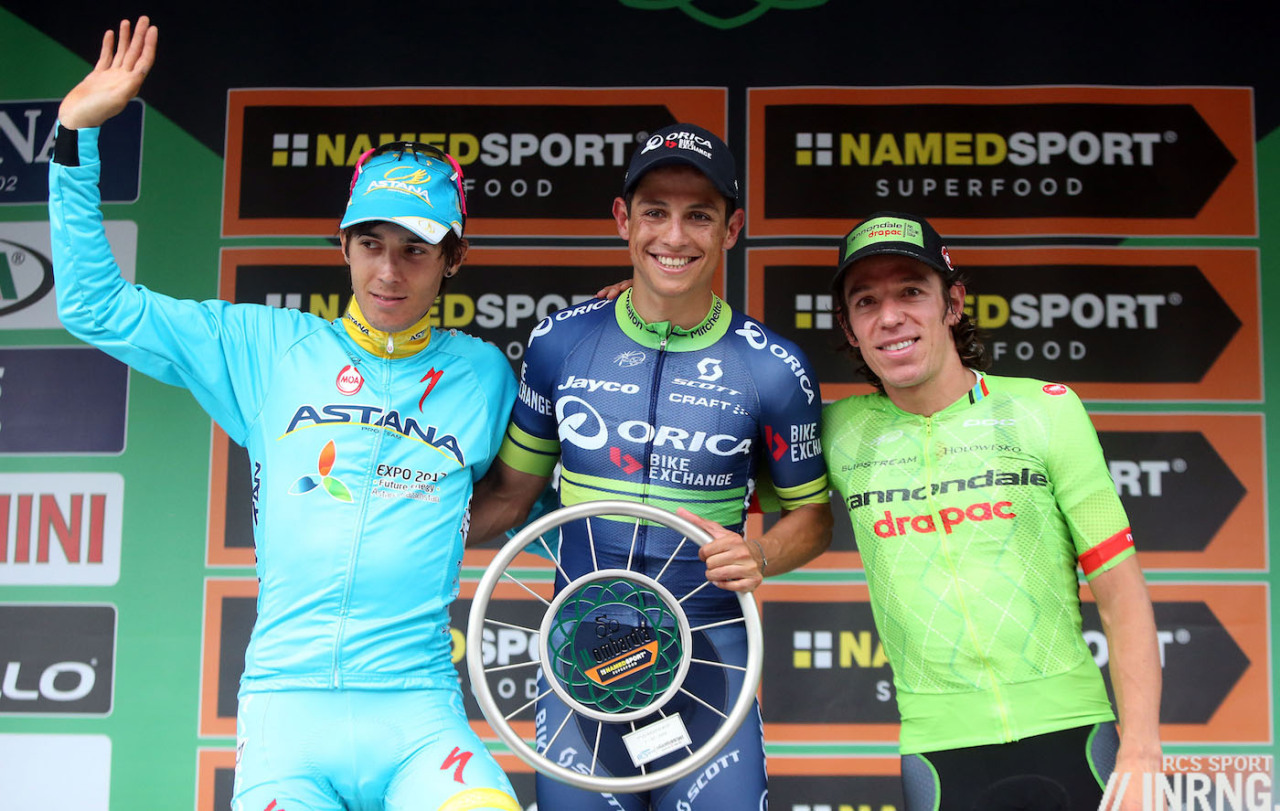