Back to normal and a sprint finish around the walled city of Lugo.

Stage 4 Wrap: a win for the plucky Direct Energie team? No, this was no lucky break, instead a big move of 21 riders established itself with over 100km to go and stayed away to start the final climb with a comfortable lead on the peloton. On the final climb Lilian Calmejane rode away à la pedale from everyone to win the stage. Having written yesterday that the team hadn’t won a World Tour race since 2013 their neo-pro took a good stage win and bike sponsor BH, a Spanish manufacturer, will be particularly pleased. Calmejane is a promising rider but sees himself as more of a classics contender, a Sylvain Chavanel kind of rider but on a short climb he was able to put his power to work. Once over the line he gave capable interviews in English, a by-product of a management degree. Darwin Atampuma took the overall lead as he continues his excellent season and for a change there’s every chance he keeps this for more than a day given BMC will value this opportunity; Ruben Fernandez cracked on the final climb. A select group came in together while Steven Kruijswijk, Miguel Angel Lopez and Igor Anton where among those to lose time.

The Route: a flat run along the coast before they turn inland at Ribadeo and soon after an unmarked climb, 5km at 5% but with some 7% along the way before the feedzone, intermediate sprint and the day’s noted climb the Puerto de Marco de Álvare, almost 12km an an average of 3.8% as it tracks up a valley with some steeper sections higher up. 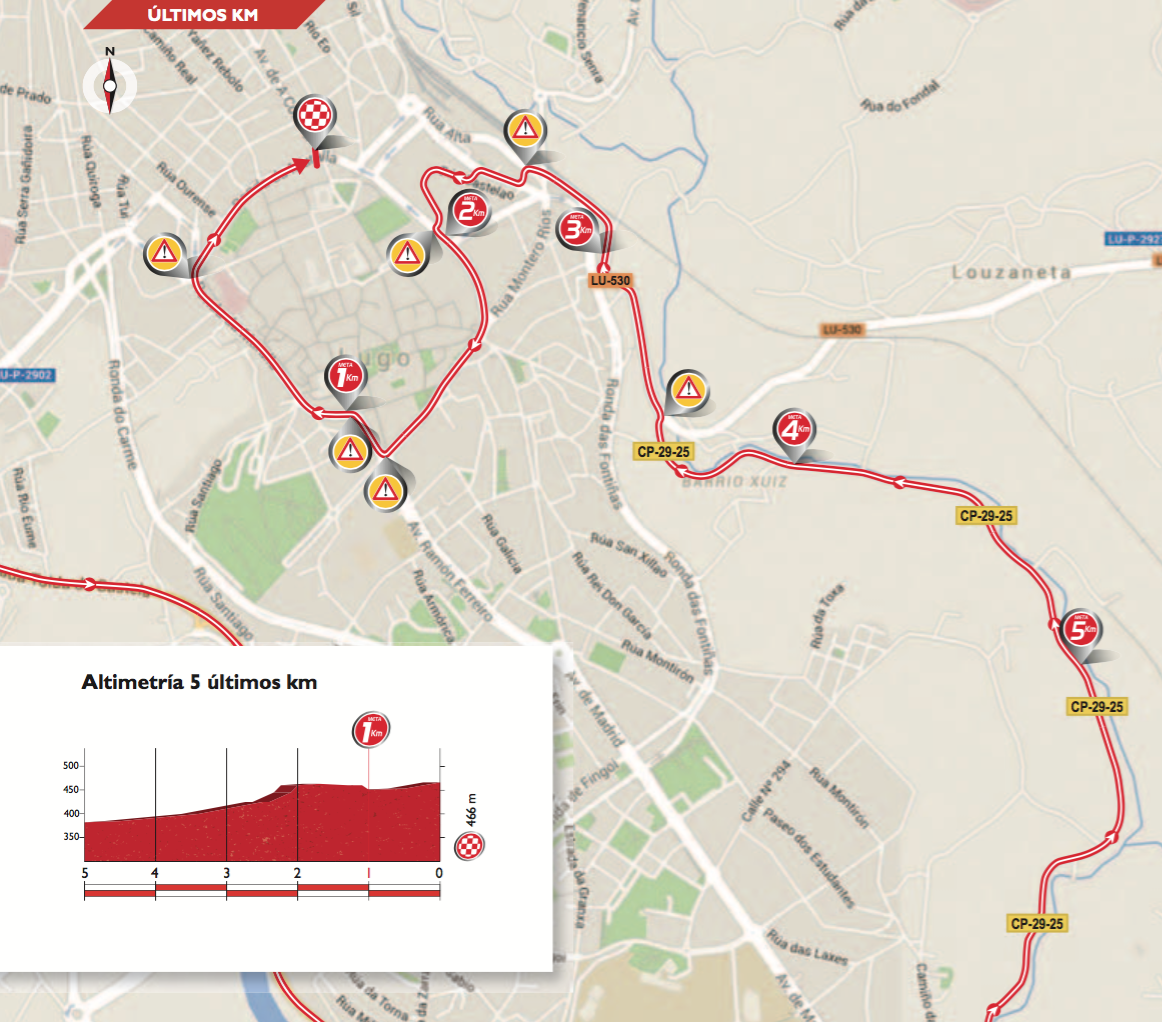 The Finish: they reach Lugo – famous for its walled city – but instead of going straight to the finish go for a loop in the countryside (without crossing the finish line). The graphic shows the final 5km but note the red route on the map near the profile, they pass by the river before gradually climbing up and the steepest part comes as they approach the city walls with 2km to go and then tour the city walls to the finish line.

The Contenders: Gianni Meersman again? He took one win because he was the fastest and had the best team so a repeat seems logical. Still there’s plenty of competition, first from rivals Lotto-Soudal with Tosh Van Der Sande. Trek-Segafredo’s Niccolò Bonifazio is anther pick as is Orica-BikeExchange’s Magnus Cort Nielsen. Bora-Argon 18’s Michael Schwarzmann was second on Stage 2 and a surprise name but he’s had several top-10s this year in sprints so he could be in the mix again.

So far the breakaways have managed to stay away so the chance of a move sticking rises today too, there are no big sprint teams to steamroller the race.

Weather: hot and humid if the promised rain appears, a top temperature of 32°C.