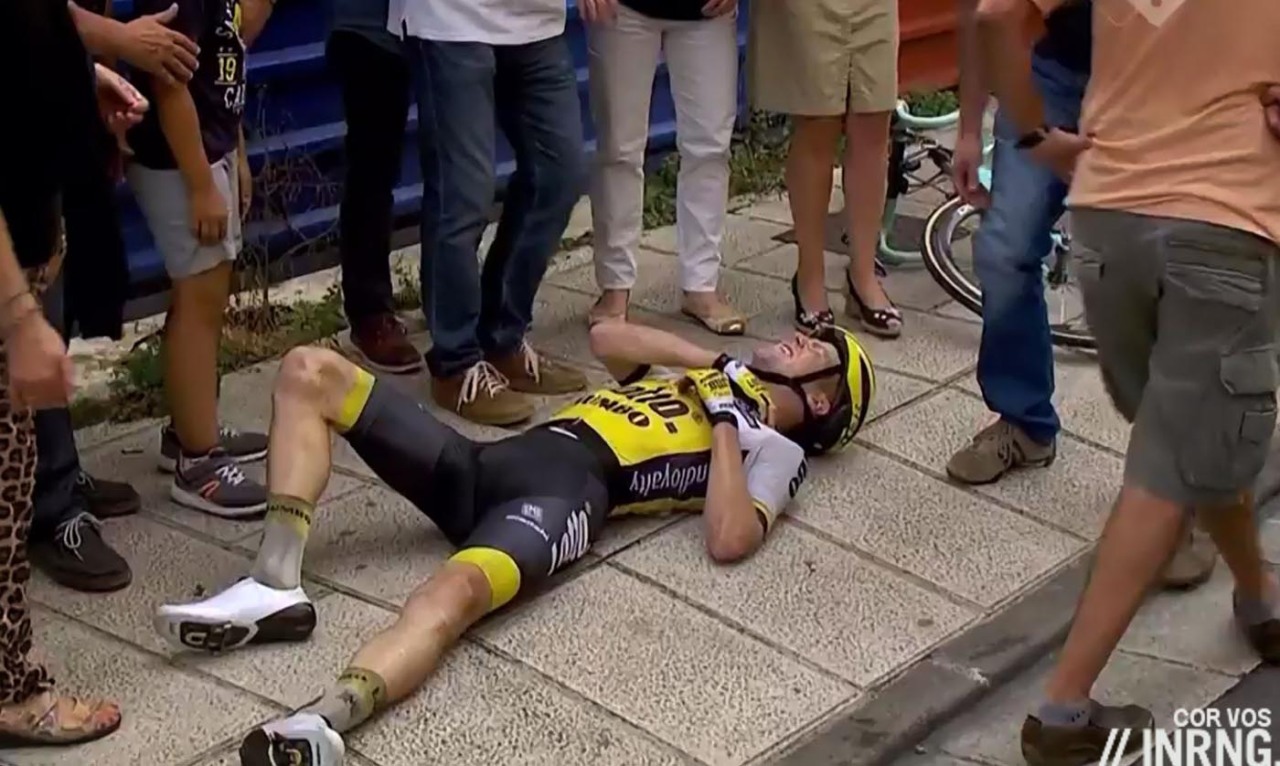 Steven Kruijswijk is out of the Vuelta after crashing into an unmarked bollard during the finish of yesterday’s stage. It’s the latest safety concern. Each time there are calls for something to be done but what could be done and who could do it?

Predictably there are lots of calls for the UCI to “do something” but in the immediate moment the rules firmly say it’s not a UCI matter and in the longer term the governing body is a weak institution so if it tried to take charge this might not work out well. Let’s look at the rules on race safety. There’s a UCI rule declining responsibility in the case of an accident:

1.2.063: In no case can the UCI be held responsible for defects in the course or installations of for any accidents that may occur.

There are other provisions in the rulebook to reinforce this. On the specific subject of the route it’s up to the race:

1.2.061 the organiser shall ensure that the race course or the competition grounds include no places or situations that could constitute a particular safety risk to anyone (riders, attendants, officials, spectators, etc.).

As you see this is general and covers everything from the route to spectators and it puts the responsibility on the organiser and not the UCI. Another rule reminds riders to check the course themselves but it’s impractical to imagine them verifying every item of street furniture, in the case of Kruijswijk here and Peter Stetina’s crash last year something’s gone wrong.

The UCI has a guide for race organisers. It’s just that, a guide and the kind of technical document that includes all sorts of tips and suggestions to incorporate. Here are some of the safety points:

The organiser must indicate, at a suitable distance, all obstacles that it is reasonable to know about or foresee and that represent an unusual risk to the safety of the riders and race followers. The various obstacles must be pointed out in the event programme/technical guide.

The increasing amount of street furniture in many towns complicates the organisation of cycle races. It is nowadays essential to remove or provide protection from such obstacles. The organiser must anticipate potential crash sites during the race

The organiser must pay particular attention to providing the riders with warnings when passing through towns and in the final stages of the event (last 20 km). These warnings should be both visible and audible. A member of the security staff (mobile escort) waves a flag (preferably yellow) and gives repeated blasts on a whistle while standing in front of the obstacle

It’s obvious but useful, a handy guide for a new event trying to make a checklist of tasks. Which brings us to the Vuelta, it hardly needs this. It’s been taken over by ASO but doesn’t yet have all the hallmarks of an ASO race in France. For example ASO has a pool of motorbike riders and drivers who get training and back-up – including official motorbikes – but as we saw last year when Peter Sagan was taken out by a motorbike during the Vuelta the race remains a Unipublic production for now.

“The UCI must do something“
Now to the broader point that the UCI probably couldn’t do much if it tried. As repeated so often here the UCI is a mid-size governing body with its headquarters located behind a retail park on the outskirts of a small Swiss town. It’s neither wealthy nor powerful and as we keep seeing it has problems getting the Tour de France on its calendar, had problems with the disc brakes trial and struggling to get the pro teams to show up at its World Championships. It might be the governing body but it’s really the supplier of rules, not the ruler, so imposing new safety requirements could be another step too far.

Still, to borrow from Winston Churchill, the UCI need not not waste this crisis. There’s a groundswell of support for change and it’d be easy to portray anyone blocking increased safety measures as anti-rider and nobody would want to be seen like that. So what to do? The rider union the CPA has a detailed plan which you should read (PDF) with two main themes: a formal check of the final three kilometres where the course is assessed several times (30 days in advance and 20 minutes before the finish); and a formal risk assessment write-up where obstacles and issues are noted and plans can be made… if it they are not then it becomes obvious who is to blame. It’s sensible but would depend on being taken seriously by its users and of course it only secures the final 3km rather than the whole route although the final moments are some of the most delicate.

Conclusion
The UCI can’t prevent accidents and a recap to remind readers the rules state clearly this is the job of the race and not the governing body. But the governing body could step in, tighten up the requirements and the CPA plan is a good starting point. The UCI can’t enact this overnight this but it can get involved here but needs the support of others. Riders taking to Twitter to moan at the UCI only show they don’t know the rules they’re supposed to be racing by and what’s really needed is dialogue and action, perhaps a constructive email or even staging a protest in front of those responsible, the race owners and supportive action to encourage all parties to discuss and implement workable plans.