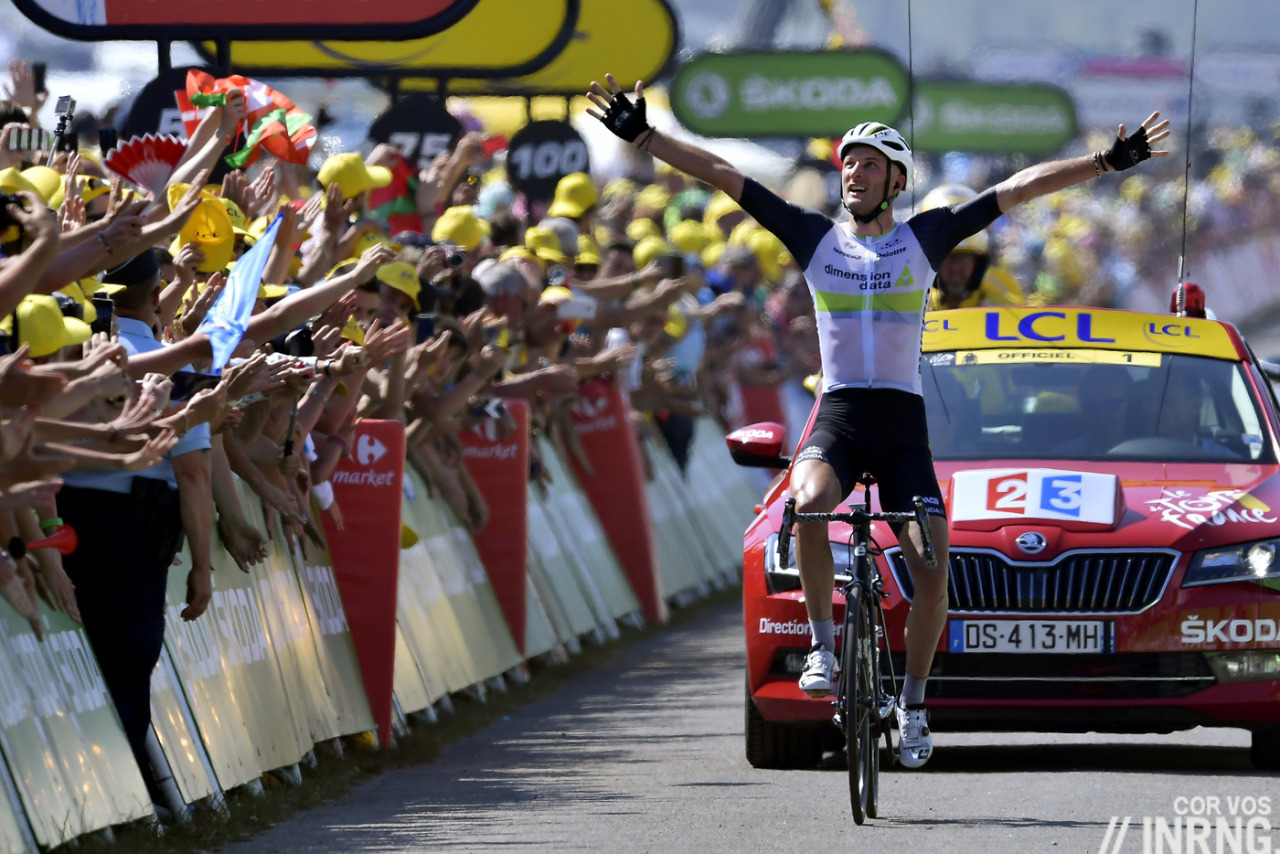 Another stage win for Dimension Data, this time with Stephen Cummings while behind biggest attack to the GC contenders came from the finishing arch. The first day in the Pyrenees delivered the kind of results we expected.

Even there was no Froome-Quintana duel there was more than enough in today’s stage to merit a separate review.

The stage begun with Mark Cavendish and Peter Sagan in the early breakaway, both trying to stay away to take the intermediate sprint and suggesting that Cavendish is in no mood to retreat from the race in order to switch to his Olympic ambitions. Etixx-Quickstep started chasing because they want to help Marcel Kittel’s bid for the green jersey and every intermediate sprint still counts for now in a contest that’s open. There are several full speed finishes to come where the pure sprinters can bag points at Sagan’s expense. The move never got much more than 30 seconds and it was brought back after an hour’s toil. An even bigger breakaway went clear with 29 riders and all but three teams including yellow jersey Greg Van Avermaet.

Vincenzo Nibali was the first to start stirring the group and then with 42km to go Navarro, Breschel and Duschene got away before Stephen Cummings bridged across. It’s surprising that at this point Cummings was getting so much room, you’d think every team manager would be saying “never let Cummings out of your sight“. In time Cummings dived to one side of a traffic island to get a gap on his breakaway companions and ride away, taking 30 seconds by the time he started the Col d’Aspin. 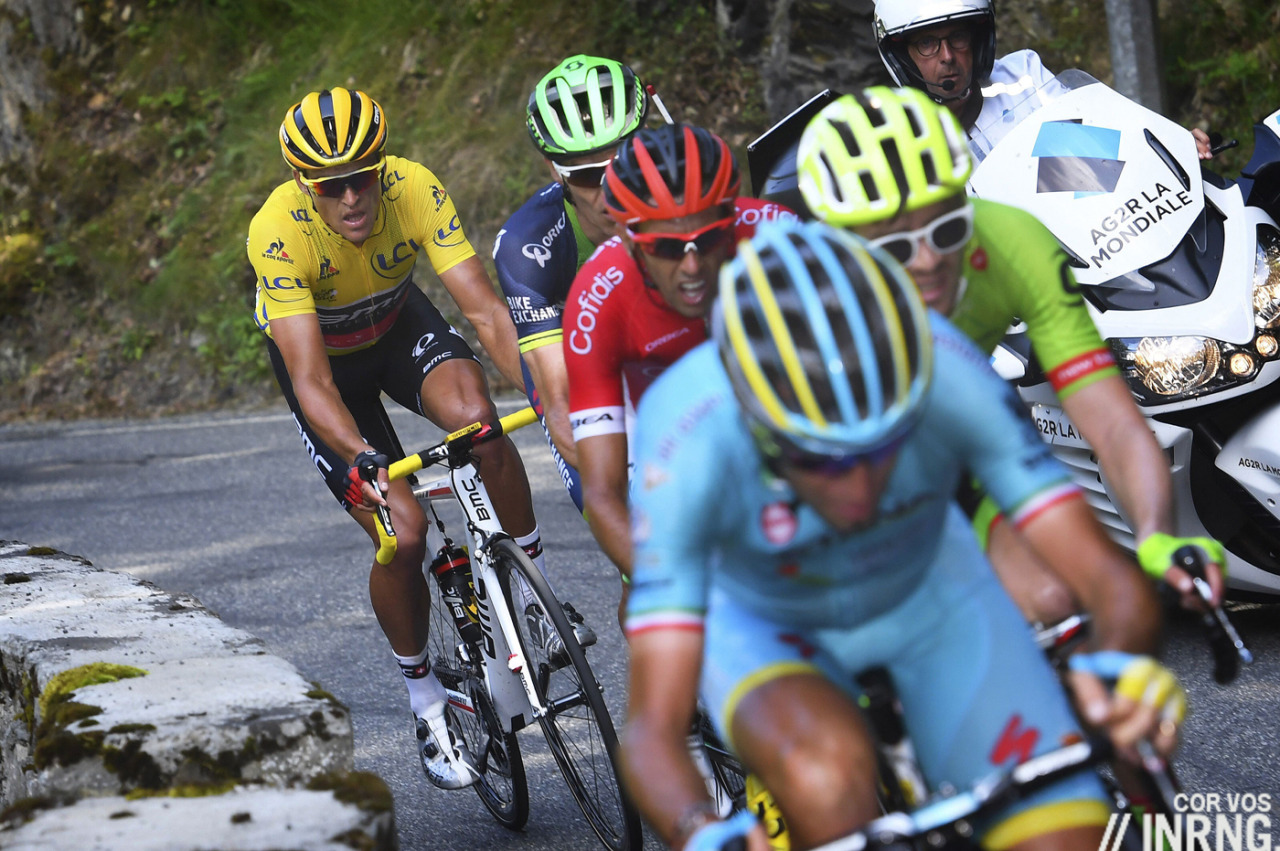 Behind Nibali took up the chase. At times it looked like he was training on the Aspin, one minute attacking in a big gear and the next spinning a low gear and constantly looking down at his power meter, Froome-style. Greg Van Avermaet was shelled by Nibali but only halfway up the Aspin and so finished the day extending his overall lead in the yellow jersey when he was expected to lose time. Can he win the Tour? Of course not and his efforts today will mean sore legs tomorrow and if he doesn’t lose his yellow jersey tomorrow then it’ll be over by Sunday.

FDJ led the bunch into the Col d’Aspin only for Thibaut Pinot to get dropped later on. An embarrassing reversal? Perhaps but it’s more likely they knew he wasn’t going so well and wanted to position him and set a reasonable tempo, you could see FDJ were not lining out the peloton. The real problem was that when Pinot was dropped it was when what was left of the group was spread over the road and not going full gas. Previews here have been expressing doubt over his form and now we got confirmation. He lost 2m46s and says he’s still got the same for as the Dauphiné where he was off the pace but salvaged a stage. Bouncing back will be easier said than done given the pressure-cooker environment.

Otherwise it was a steady day for the main GC contenders. Movistar and Team Sky did some work but no more. Warren Barguil attacked early on the Aspin, being generous we’d call this a brave move and being blunter we’d say it was pointless. He was quickly reeled in (or perhaps his team told him to cool it via the radio) and the folly of it was seen when he was dropped over the top of the climb but he managed to get back in contact on the descent. Barguil is an attacking rider but just needs to pick his moments.

Julian Alaphilippe had a go but got reeled in and then over the top of the col Dan Martin surged. Was this a pre-planned team 1-2? Adam Yates followed and was taking risks on the descent to take the white jersey. Coming into Payolle he had a small lead on the others when the 1km to go arch collapsed on him prompting a bizarre moment with a log jam of riders stuck behind. Yates needed four stitches to his chin and it could have been worse.

A word on Cumming’s Olympic selection controversy. He wasn’t picked for the British team and said out loud that it’s because he’s not a Team Sky rider, that he’s outside of the GB system. He’s certainly proved a point. But his breakaway also shows he’s longshot kind of rider who plays his own card. Given how hilly the Rio course is, the pick of Stannard seems odd viewed from here but as people speculate on what may or may not happen in Brazil in a month’s time tonight Cummings is celebrating his fourth win this season and the beauty of a solo stage win in the Tour de France.

This evening the race is in Pau, one the most-visited desintations for the race. The poet Lamartine wrote “Pau has the most beautiful view of the land in the way Naples has the best view of the sea“. As the riders rest and recover tonight they can may not be able to see the Pyrenees through the clouds but they know the race for the yellow jersey begins tomorrow.