A lively stage in the Alps that was transformed by the rain and the audacity of Romain Bardet. Chris Froome crashed and if he got up quickly he was wincing on the podium as he collected his yellow jersey with a giant bandage on his knee.

Tame move: The stage started and 20 riders went clear on the Collet de Tamié in what was an elective attack, those who wanted to go clear could go while everyone else stayed behind in the peloton. Astana: It looked limp until later on the climb Astana suddenly massed on the front to the point where several were riding clear. The sky blue jerseys of Astana were to feature on the front of the bunch from here until the the foot of the final climb. 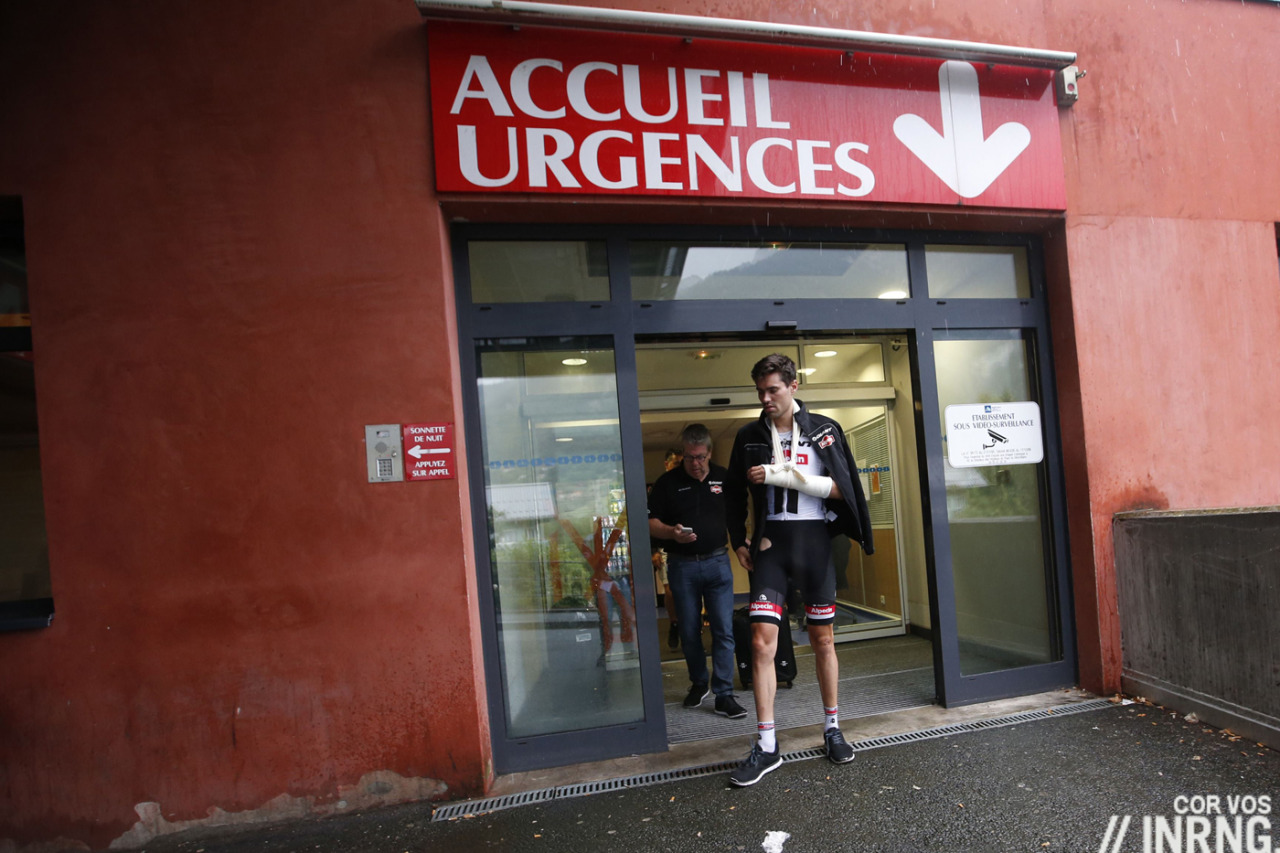 Dumoulin out: The 20 rider group never got more than four minutes and it was down to three as they reached the Doron valley. A freak crash took out Tom Dumoulin, he fell across the road and landed on his wrist and abandoned in tears. The news this evening after a visit to the race’s mobile X-ray truck is that he’s fractured his left wrist and his Olympic ambitions are in doubt.

Majka’s Coronation: As the Tour climbed the Bisanne for first time ever the bunch discovered how hard the climb was and Adam Yates was at the back. He’s been doing this a lot on the climbs but it surely frays the nerves of his management. Over the top of the Bisanne Rafał Majka sprinted clear to take full points and gain an arithmetically unassailable lead in the mountains competition, he just needs to reach Paris to win. Just Add Water: As they crossed from the Bisanne to the Col des Saisies it began to rain and this turned into a downpour for the descent. Pierre Rolland was the first to fall as he slid out on a bend. Soon Richie Porte was in difficulty, he looked unmarked as if he’d ran off the road but had to chase and in the meantime Daryl Impey got to the front of the bunch as if he wanted to make Porte’s life even harder and protect Adam Yates’s podium place.

More crashed, FDJ’s Seb Reichenbach fell with team mate Steve Morabito and then on a roundabout Bauke Mollema crashed. He was chasing with team mates and initially it didn’t look serious but he was about to fall off the podium too.

Spontaneous: As they rode back down yesterday’s time trial course Ag2r La Mondiale’s Mikaël Cherel had words with Romain Bardet about an attack. Cherel got into a low tuck and began to drift clear of the yellow jersey group and Bardet threw his rain jacket to the side of the road. Next was the Domancy “Route De Bernard Hinault”. This road was a key feature of the time trial stage and if it is steep and twisting to climb it’s treacherous in the wet. Now add freshly-laid blacktop and paint from supporters and it was even more sketchy. While Bardet was threading his way down the hill suddenly the TV cameras switched to film Chris Froome standing in the middle of the road on his feet once again. This time he was up and running only on a bike borrowed from Geraint Thomas.

Pear-shaped chainrings: Even if Thomas’s bike had identical geometry it lacked one crucial thing for Froome: the ovoid chainrings. Froome has been using these for years but L’Equipe reported the other day that Shimano has tried to stop the rest of the team from using them. Whether Thomas likes them or not doesn’t matter, the point here is that Froome was suddenly back on round chainrings and this is a very different pedalling action. If you think the oval rings look odd then the reverse holds true, someone used to them finds round chainrings equally bizarre to pedal with, the feel of the pedal stroke is alien. All this and Froome’s elbow and knee were bleeding and he had a big hole in his yellow jersey.

Ahead Cherel, Bardet’s body double, was pacing his leader to the foot of the final climb. It looked brave bordering on reckless, at best they could hope to take 30 seconds, no? Victor Hugo once wrote that “in the Alps you are either an eagle or a cretin” and we’ve seen plenty of riders trying to soar only to get humiliated by Team Sky and pay for their attacks by being dropped and lose time. Ag2r La Mondiale knew this and in the morning the team briefing was to stay still until the final climb. Only here was the Cartesian Bardet once again, the masters student abandoning his race management thesis for a wild gamble. Sure this wasn’t a 100km raid but going solo against Team Sky, BMC, Astana and Movistar before the final climb had started was something few others dared envisage.

Froome’s crash disrupted the chase behind, nobody was waiting for him but it meant Sky were not setting the pace. Bardet began the final climb with about a minute’s lead. Bardet’s race radio was off too and so he didn’t know what was going on behind. In the team car behind Vincent Lavenu was hurling encouragement into the mic without knowing it could not be heard.

Lucky for Bardet because there was a lot happening back there. For once Wout Poels was trying to slow the pace of the group on the final climb in order to make life easier for Chris Froome but his attempts didn’t last long as Dan Martin, Richie Porte and Fabio Aru launched a flurry of attacks which distanced Adam Yates. Meanwhile Bauke Mollema was far behind and alone.

Bardet hung on for the stage win and was overwhelmed, sitting up before the line in celebration rather than pressing for every second but he’d done enough to take second place and took the ten second time bonus. Boring Tour: after he finished Bardet said he and Cherel just decided to go in a “crazy move” and said he was aware of the comments about a boring race so far but said he was waiting for his “window” to open. Today doesn’t erase the series of flops and mishaps from a host of GC contenders but it does restore some fo the balance. It’s bold enough to attack on the descent when others are falling like skittles but here was a rider with ambitions for the podium going clear with 16km to go by himself rather than waiting to snipe a few seconds on the final climb in the hope rivals fell by the wayside.

French win: there have only been two editions of the Tour de France without a French win, 1926 and 1999 so this is narrowly avoided. Does it matter? Only if you see the sport through nationalist glasses which tends to happen less in cycling but it’s always helpful when the home nation gets a slice of the action. The difference this time compared to previous French triumphs was that this wasn’t a consolatory win like Bardet enjoyed last year after his GC bid had fallen apart. This time Bardet was in the hunt for a podium spot and he’s now closer to this goal.

The only negative to the day was the crashes as a form of the action. But when Froome went down he appeared to be forcing the pace with Vincenzo Nibali only to slide out on a white line. The pair crashed and it took a moment until the others arrived. This was a pure handling error. 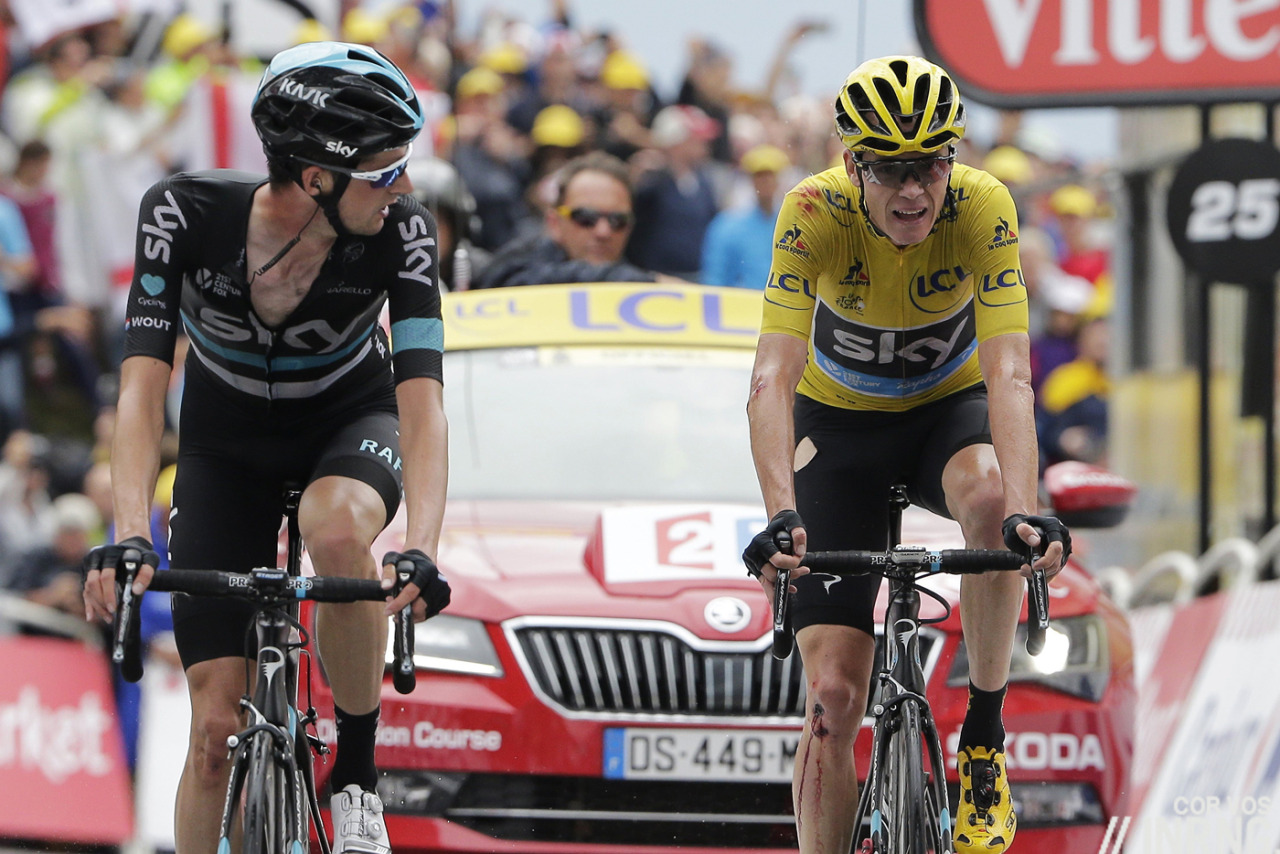 GC Shake-up: for all their work today Astana saw Fabio Aru take back eight seconds and move one place higher overall from 7th to 6th overall as Bauke Mollema fell from 2nd to 10th, a cruel result for the likeable rider. The Dutchman has been struggling in recent days but looked like he’d lose seconds only to surrender four minutes. Yates lost time and copped a 10s time penalty after being caught taking a handsling from team mate Ruben Plaza. Meanwhile Nairo Quintana is now third overall largely thanks to staying upright.

More: if today had action, tomorrow’s stage is equally promising given the mountainous profile ahead. There have been concerns about the Col de la Ramaz with rockfalls and roadworks but it is open and so there’s no change to the planned course, only that heavy goods vehicles like the publicity caravan will detour around to lighten the load. Then comes the monstrous Joux Plane. 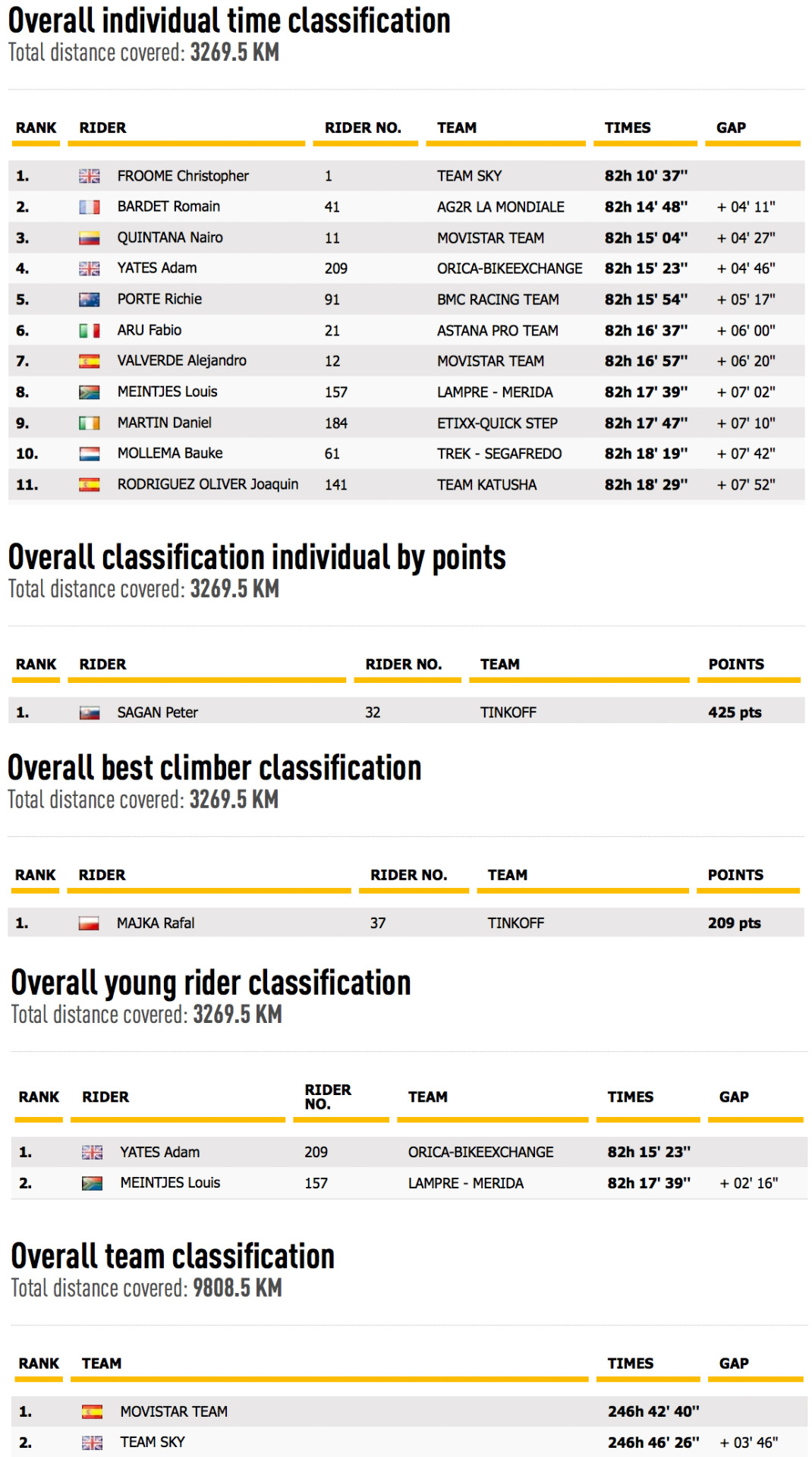