Three Weeks To The Giro The Giro is three weeks away and it’s time to take a quick look at the various contenders and see where they are. Vincenzo Nibali is probably the top pick now but on reputation alone because he’s not shown convincing form. The upcoming Ardennes races and the Giro del Trentino will give us more clues but until then here’s a quick scan of where the riders are. 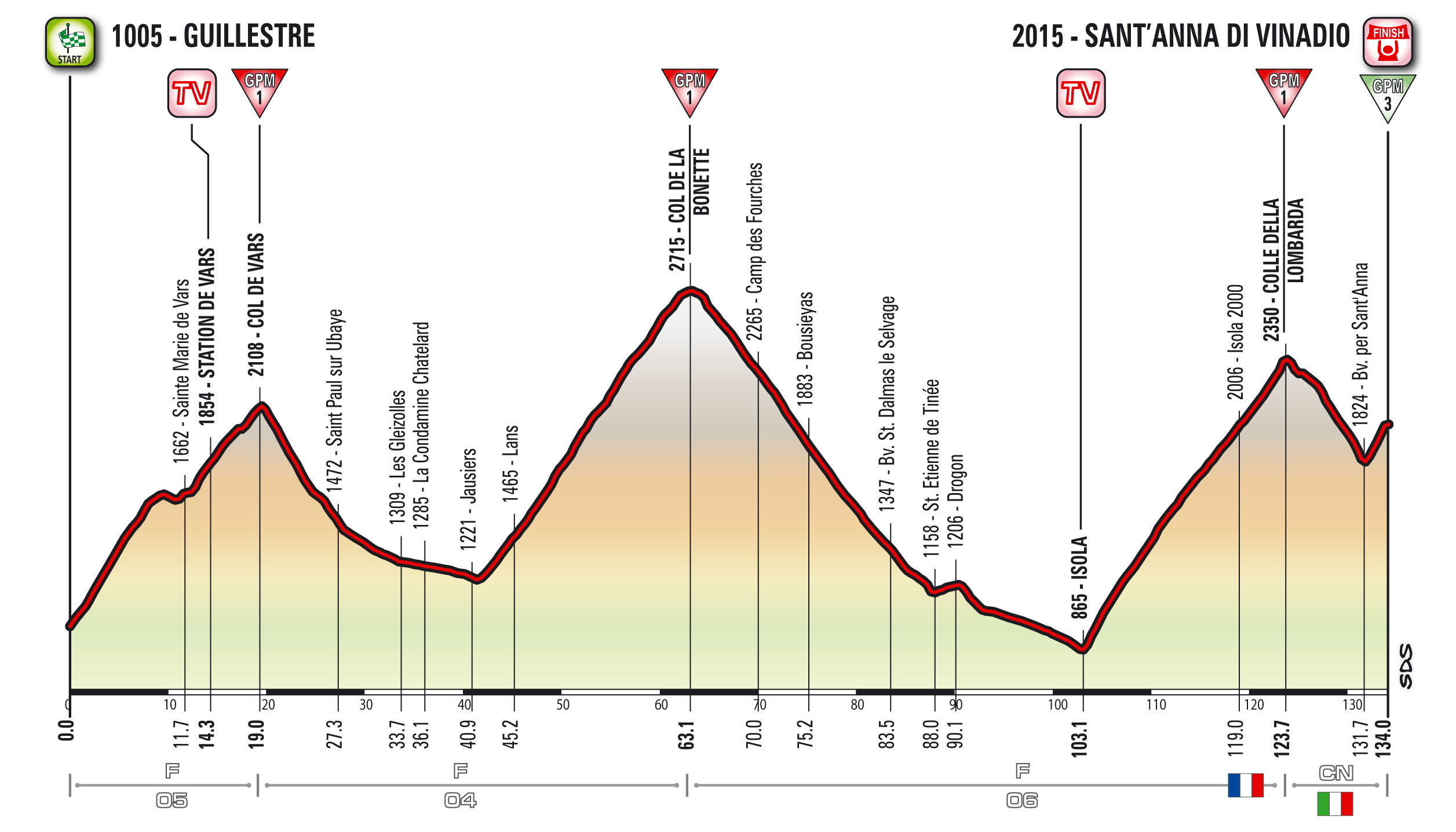 A reminder of the route. There’s a prologue in the Netherlands and two more time trials, one of which is uphill. There’s a less mountainous feel than recent years with four high mountain stages although the race aims very high with Colle d’Agnello (2744m) and the Col de la Bonnette (2715m) on consecutive stages. Snow will be a concern. Alberto Contador isn’t riding, nor is Fabio Aru so the only podium finisher from 2015 to return is Mikel Landa who is now with Team Sky. The Basque climber was ill earlier this year but salvaged a stage win in the Tour of the Basque Country. Good for the morale but his inconsistency may not be and if last year’s Giro was great for him, the time trial stage was a stinker. He’ll need to have made gains in the windtunnel and then some and we’ve yet to see how he’s faring this discipline so far this season as the Basque TT stage wasn’t an ordinary effort. He’s a good prospect for the race yet a risk too and this makes things all the more exciting. Team Sky haven’t cracked the Giro in the way they’ve done the Tour de France. There should be Sergio Henao who is filling in the role of most valuable helper right now and perhaps gets his chance in the Ardennes soon. It’s possible Leopold König rides too, one of several riders who joined Team Sky with ambitions only to find themselves usurped by an even bigger signing, this time though the Czech rider can become the team’s leader through his superior time trialling skills if he can get himself into a better position than Landa. Vincenzo Nibali has won the Tour of Oman and was a big pick for Tirreno-Adriatico but there’s not much more to go on. He’s erratic, sometimes capable of great authority in a race and other times sulking with every pedal stroke. He’ll need everything to right between now and the first big rendez-vous of the Giro. We’ll see how he’s climbing when it comes to the Giro del Trentino next week. In the background there’s talk of a new team from Bahrain and it’s unknown if he’s signed a deal yet. His Giro performance could set his market value although he doesn’t seem bothered. He’ll head up a strong Astana team and it’ll be interesting to see the workplace politics, whether they all work for him or play personal cards. Several new teams are mooted and UCI points could have a high value soon if these new teams appear and want a World Tour licence. Nibali can also count on big support at home, he’s in the Italian champions jersey and enjoys a strong following in Italy to the point where his presence and in particular his success in this race will bring the crowds out.

Ever-present in the Tour de France and Vuelta, Alejandro Valverde rides the Giro for the first time. Neither a priority for his sponsors, nor worthwhile on the calendar and for a while bad for the ego given he was a wanted man by Italian anti-doping authorities. The route and the lack of time bonuses don’t suit him so much so his he riding to win or for conditioning ahead of the Olympics? With Valverde there’s never a training race. He’s going to turn 36 in the coming days but ride in the Vuelta a Andalucia where he simply rode away from everyone on the Peñas Blancas summit finish suggests he’s as strong as ever. If his programme has changed with the Giro he’ll do his traditional Ardennes races before and he’s already looking sharp after fourth place in the Klasika Amorebieta. Last year’s surprise Andrey Amador could return but won’t have as much room, he’ll be marked and probably on team duty too. Esteban Chaves should bring a cheer to the race thanks to the Colombian’s radiant smile and lively racing style. If he can repeat his Vuelta form he’ll be great value in the race although so far he’s been very quiet and yet to be seen on TV on a mountain stage this year. The race’s time trials don’t suit him either and he’ll have to share the Orica-Greendge team with Caleb Ewan who comes for the sprints.

Rafał Majka has surely got a Giro win in his legs. Once seen as a pure climber he’s now useful in time trials too, especially if they’re hilly. He’s experienced too, he comes free from having to work for Alberto Contador and that extra motivation of knowing his market value could soar with a win just as his Tinkoff team is set to end. So far so good… but his form is unknown and his Vuelta podium is one thing but leading a race and coping with all that comes with it is another. Tinkoff will send their A-team to the Tour de France, including Majka as a helper, but there should be enough support to help on the plains and in the mountains. It wasn’t long ago that Tom Dumoulin was hot property after his Vuelta and more. But he and the media interest has cooled with few results to speak of so far this year. All part of the plan? Perhaps and here’s a Giro route to suit with a hilly time trial and few mountains but the major goal seems to be the Olympic time trial title. Pink and gold are achievable and if he wants a grand tour win here is the most friendly route he’s going to get this year and possibly for the next one or two seasons as well. He’ll need support in the mountains and it’ll be interesting to see who among the few climbers Giant-Alpecin have are tasked with support in the Giro rather than saving themselves for the Tour de France. His season starts now with the Amstel Gold Race on home roads.

Rigoberto Uran’s progress in the time trials has made him a real contender for the podium in the Giro and perhaps even the top step this year given the significance of the time trials. Know for grinding out results while other fall away in the final week we’ll see how he’s fared with the team swap to Cannondale and the new training regime, something which has frustrated Pierre Rolland at times. Cannondale team mate Davide Formolo is also worth watching, he took a stage last year and maybe now he’ll go for the pink jersey. If Ilnur Zakarin is not on your radar you need to start thinking about him. The lanky Tartar rode the Giro last year and took a stage at Imola, escaping a select group on a tough mid-mountain stage but it was his Tour de Romandie victory that introduced him as a grand tour contender. This year he’s taken the big mountain stage of the Paris-Nice, albeit by sitting on the wheels but isn’t that how you win stage races? He’s also very good in the time trials. However he’s only ridden one grand tour before and that was not as a leadership contender so dealing with the pressure and being in the right place for three weeks is going to be a novel experience.

Domenico Pozzovivo will lead Ag2r La Mondiale and is a perpetual candidate but he’d surely prefer more climbing. He’s likely to be a factor in the race and not just in the high mountains but on any punchy finish. Jean-Christophe Péraud rides and the last time he tried to follow Vincenzo Nibali he ended up on the podium of the 2014 Tour de France. It seems too much to ask this time but he’s a tough ride who could easily make the top-10 if he avoids accidents. Lotto-Jumbo return and perhaps they’ll want more of the same. Steven Kruijswijk was a hero of the race for his riding but didn’t have the rewards to show, neither a stage win nor the mountains jersey but consistent riding could see him visible again. It’s not clear who else rides, presumably Robert Gesink and Wilco Kelderman are being saved for the Tour de France.

Of course there’s more than the GC battle. Caleb Ewan is riding and so is Marcel Kittel, Arnaud Démare, André Greipel, Matteo Pelucchi, multi-stage winner last year Sacha Modolo and young prospect Jakub Marecko among others. Plus there’s Fabian Cancellara aiming for the prologue and all the escape artists and stage hunters hoping for action too. Conclusion
In three weeks’ time it’ll be the eve of the Giro d’Italia which starts on a Friday because of its Dutch departure. While every move of a stage racer during June is analysed for clues about their performances in the Tour de France there’s not much to go on for the Giro, all the more reason for this piece to look and see where the contenders and pretenders are. The trend for grand tour contenders to do one race a month at most and then return to altitude means only they and their coaches know the level of form.

Vincenzo Nibali seems to be the best pick with Rafał Majka and Alejandro Valverde other obvious names. Before it began last year’s race seemed to have only four riders in contention for the podium with Alberto Contador and then Richie Porte, Fabio Aru and Rigoberto Uran and few big names to contend with after that. This year’s race should have a deeper field and more contenders.