A final look at the victory rankings for the teams. With the season finished it’s time to look back at the wins and also look deeper within them. Which months are the best time to win? Does starting off well ensure a team rides well all year? Which teams had the most podium places but the fewest wins? Which teams are the most reliant on one rider? 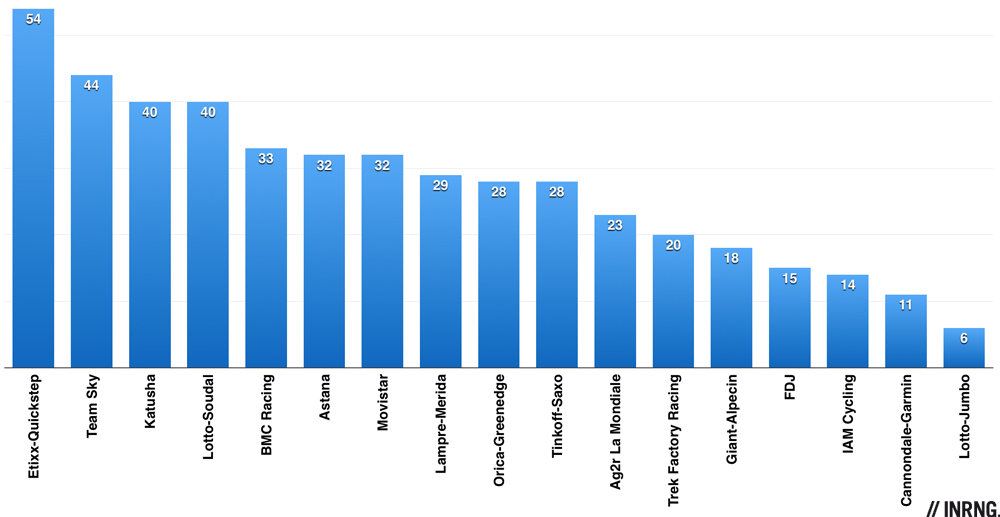 Etixx-Quickstep top the table and once they took the lead in the rankings in February they never looked back. They’re one of the sport’s super teams but apparently their budget is below that of BMC Racing, Team Sky, Katusha and Astana. Even the biggest teams have their niches, for example BMC Racing may be a mega budget team but they rarely contest a bunch sprint, leaving this domain to others; Team Sky fill this niche with Elia Viviani but they’re still very much stage race specialists and in 2015 Richie Porte took more wins than house sprinter Viviani this year. As for Etixx-Quickstep, they win a lot but are challenged by gravity, almost no wins to show in the mountains with Julian Alaphilippe the exception to the rule with his Mount Baldy win in the Tour of California.

Now to look more deeply into the results…

The chart above shows the share of each team’s wins by its lead rider, in other words how dependent a team is on one rider to bring in the wins. Obviously the trends vary, Lotto-Jumbo only won six races so Moreno Hofland’s two wins account for a third of this so treat teams towards the right of the chart more cautiously as we’re talking about few wins to share. But the stat for Katusha is interesting with Alexander Kristoff delivering half of the team’s wins and André Greipel bringing 40% of Lotto-Soudal’s wins. It’s what you’d expect in a team built around a strong sprinter but one injury here can really dent a team’s results and with it morale and more.

Meanwhile Mark Cavendish was Etixx-Quickstep’s top rider and his contribution helps them take first place in the table but what is remarkable is how 15 of the team’s 29 riders, including stagiaire Fernando Gaviria, took solo wins in the year. Tinkoff-Saxo’s most prolific rider was Peter Sagan while it was at Team Sky it was Richie Porte on nine ahead of Elia Viviani on eight. Sagan finished on the lower steps of the podium more often than he won this year but what of the other teams?

This chart shows the share of each team’s podium places in 2015 with gold, silver and bronze to depict first, second and third places. Normally you’d expect an even distribution but in 2015 some teams struck gold disproportionately. Again parsing lowly Lotto-Jumbo’s wins doesn’t tell us too much as it’s a small data set but all the same look at 18% of their podium places were wins, a surprisingly low figure. Meanwhile mid-table teams like Orica-Greenedge and Tinkoff-Saxo have a lot of silver meaning so many second places but there’s little bronze suggesting, if anything, that their second places are not necessarily missed wins but upgraded third places. 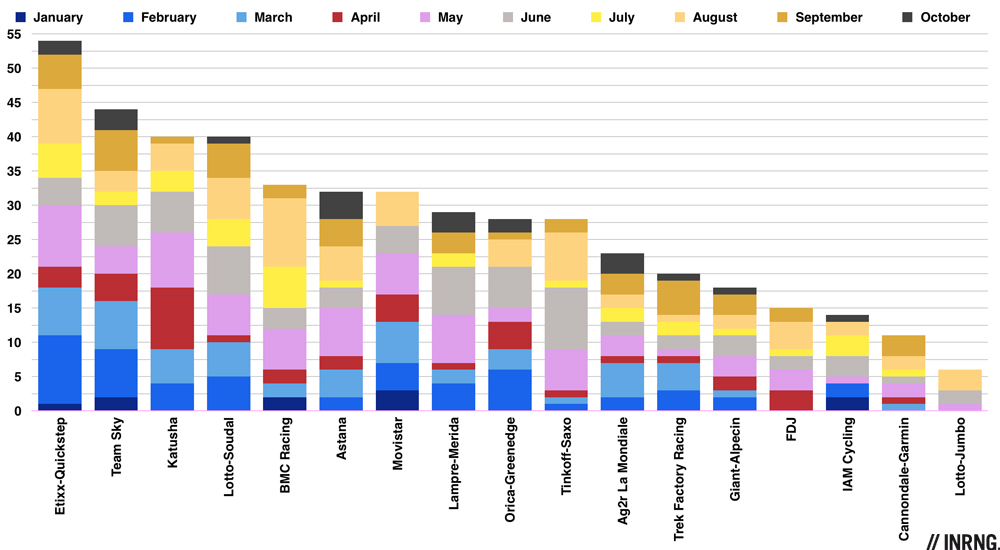 Now to the rankings month by month. The chart about shows the standard team victory rankings for 2015 but each tone represents a month of the season. Apologies for the eyesore and if it helps pink is May and yellow is July but this lets us see when teams thrived. It’s reasonably random. Look at the January, February and March in blue and you can see the wins racked up by Etixx-Quickstep and Sky help but there’s plenty of blue for Ag2r La Mondiale and Trek Factory Racing, even some for IAM Cycling too. All told if you run a correlation check the first three months of 2015 weren’t always conclusive for a team’s fortunes it’s only by the end of May that the patten really firms up. 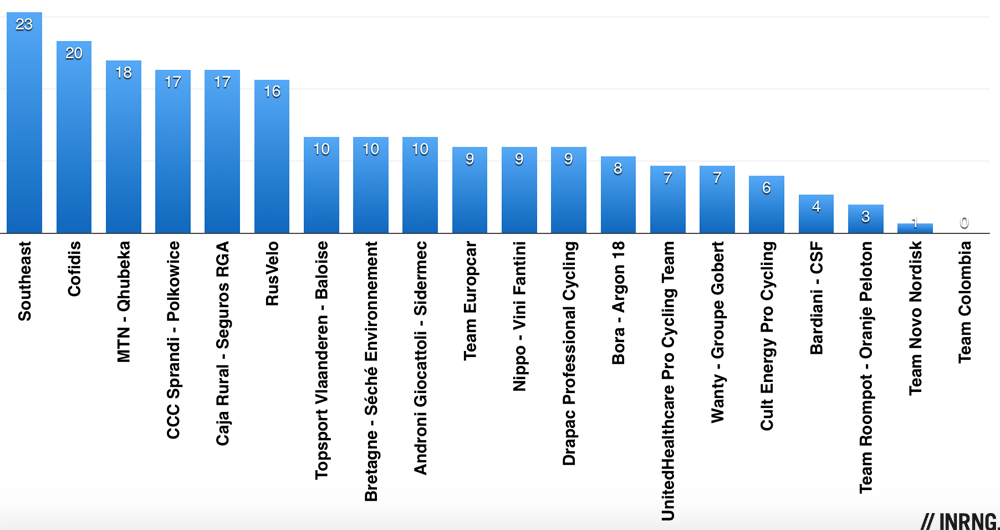 Finally the Pro Continental rankings for 2015 with Southeast the surprise winner. They take pole position thanks to Jakub Mareczko, the Italo-Polish sprinter took seven stages of the 2.1 Tour of Taihu Lake as well as the overall classification to see the Italian team fly past the likes of Cofidis, MTN-Qhubeka. Of course it’s still quality vs. quantity but with Marecko it’ll be interesting to see what they do next year, he was red hot as an amateur last year and has thrived in the pro ranks and if progress continues he’ll start to challenge in bigger races.

Methodology: all World Tour, *.HC and *.1 and races are included in the rankings above. Wins are for first place or the overall classification.