Cycling has many season long stories and sub-plots if you know where to look. One of them is qualifying for the World Championships in September.Nations qualify via the UCI rankings and the more UCI points a nation’s riders have, the larger the team it can bring to support its contenders for the rainbow jersey.

Here’s a reminder of the qualifying rules for the men’s road race and a look at the current state of play before selection is made in less than a week’s time.

Qualifying for the World Championships road race is a complicated task. Each nation is offered a quota of places and it’s up to the national team selectors to pick the individual riders to suit their goals. The quota is based on the UCI rankings due out on Saturday and set out as a PDF on the UCI website. Here’s the summary:

So in short a selector from a large or well-ranked country can pick up to 14 riders and race nine on the day as long as they’re ranked somewhere. Here is the current UCI World Tour nations ranking: 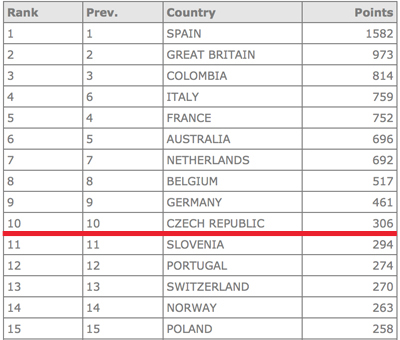 As Saturday is the deadline the final GC of the Eneco Tour does not count, only the stage wins for which there are 6-4-2-1-1 points for the top five. Arithmetically there is a chance that Slovenia can overhaul the Czechs given several Slovenians start the Eneco Tour but Christmas will have to come early for Borut Božič and company.

Each nation in the top-10 of the table above can bring nine riders. Currently Spain, Colombia, Italy, France, Australia, Netherlands, Belgium have nine or more riders with a World Tour point to their name so all of these nations may nominate 14 names and start the road race with nine riders of their choosing.

Germany have eight riders with a World Tour ranking and Great Britain has seven but these nations still qualify nine riders because Germany and Britain are 13th and 14th respectively in the UCI Europe Tour rankings. This just entitles them to take extra riders because the top-14 nations on this circuit get an extra allowance.

The Czech Republic has only three riders with World Tour points and is 17th on the Europe Tour rankings, ie not in the top-14 to qualify for more, so it can only start six riders.

Note how this means some nations can be ranked in the top thanks to one or two riders and so they struggle to fill the rest of the nine places. For example the Czech Republic have “only” Zdeněk Štybar, Leopold König and Roman Kreuzier in the World Tour rankings so the national selector has work to do to find more Czech mates to support Štybar.

Now for those nations without a presence at all in the top-10 of the World Tour rankings which is then based on the national rankings in each regional tour.

The allocations are “excluding the nations qualifying via the UCI WorldTour classification” so for example in Oceania, Australia qualify already so it’s New Zealand that can start three riders (they actually sit higher than Australia in the current Oceania rankings).

Each nation in the UCI WorldTour classification which has not otherwise qualified but has:

The come more rules where if an individual is well placed on each of the regional tours they too qualify their nation to start. Finally if the World Champion is not able to start via these rules he gets to start… but Poland qualify already and presumably Michał Kwiatkowksi starts. Does it matter?
The rules above are dry stuff, a lot of conditional scenarios and confusing ranking systems. But it matters here because having a big team in the road race is very useful if a rider has ambitions to win. Last year the Polish team were visible for a lot of the race as they helped to contain moves and set up their leader Kwiatkowski. We saw the British team execute a plan to help Mark Cavendish win in 2011 and one part of “Project Rainbow” saw British riders being tasked with harvesting UCI points in order to boost Britain’s rankings so that the team could start with a full squad of riders in Copenhagen.

Not that every nation plans so carefully, for example there’s already rivalry among Belgians with Philippe Gilbert, Greg Van Avermaet and Tom Boonen competing for selection and leadership. Some teams hatch long term plans, others just pick some uninjured riders and pay for their flights in order to fill the quote.

The Course
The Richmond 2015 course features 16 laps of a 16.2km course with 108m of vertical gain per lap, some of which is over a rough cobbled climb, 13% for 100 metres. The rest of the course features big wide roads and many right-angle corners.

UCI Rankings
Since we’re on the topic of UCI rankings the governing body has a new website but still has the old rankings system where updates seem to be processed only periodically, leaving national selectors and bloggers alike to crank the rankings manually. Conclusion
As ever it’s not something you can explain a few seconds or a tweet so hopefully the above helps set things out. In short it’s the national rankings in the World Tour that determine the biggest teams but countries need to have plenty of riders in the rankings to be sure of having a full squad. As set out in the Czech example above it’s not enough to have a red hot pick for the race like Zdeněk Štybar, a depth of performance from compatriots is needed to give him a bigger team.