A picture postcard of a stage with amazing scenery and pleasant roads to ride. Not that the riders can enjoy this with oven-like heat before the explosive finish above Mende. Stage 13 Review: a break of six and like every move outside the mountains this year it was kept on a tight leash, they never got more than five minutes’ lead. Giant-Alpecin chased for much of the stage. Down to three in Rodez, the breakaway was caught right on the final climb including Wilco Kelderman. The Dutch GC hope might be reduced to breakaways but still looked classy with an effortless pedalling style: we’ll see him again in the mountains.

On the final climb Arnaud Démare surged like he’d not done a reconnaissance ride only for Greg Van Avermaet and Peter Sagan to ride past. It posed an existential philosophy dilemma: if the two approach the finish line together who must finish second? The Slovak was sitting tight and ready to pounce just before the line but he never made his move, the finish was too hard to kick again. This was no sprint as Van Avermaet led from the start in a move that would have made Philippe Gilbert jealous.

As consolation Sagan boosts his lead in the green jersey. André Greipel won the intermediate sprint but suffered in the infernal heat and was dropped so he couldn’t take a single point in Rodez. Tough for John Degenkolb too as the whole team toiled all day on the front for a finish that never suited him.

The Route: uphill from the start. Some will be on the rollers to get ready for the waves of attacks. After 44km the race drops down to the Tarn valley for a little shade and some air chilled by the river in the gorge. It’s postcard scenery and borders the terrain used in Tim Krabbé’s novel “The Rider”.

The Côte de Sauveterre marks the resumption of climbing but as big as it looks on the profile it’s a steady climb that rolls fast as it heads up to the plateau. The heat will make it hard but don’t get your hopes up for a raging battle as the roads are open and wide across the top: this isn’t prime ambush country. A descent and then instead of riding into Mende the race loops around to take the road via Chabrits, wide and steady climb listed as 1.9km long in reality 3km of firm climbing at 6%.

The Finish: the profile doesn’t do it justice. 3km at 10.1% doesn’t sound too bad but the second kilometre is more like 12-14% and it’s an eight minute effort for the best. What it makes it so much harder is that because it’s so steep it’s hard to make up for lost ground so all the big teams will be going elbow-to-elbow to place their leader into place. The race won’t be decided here but time gaps can appear. Once over the top there’s 1.6km to go before the flat finish line on the runway of Mende airport. 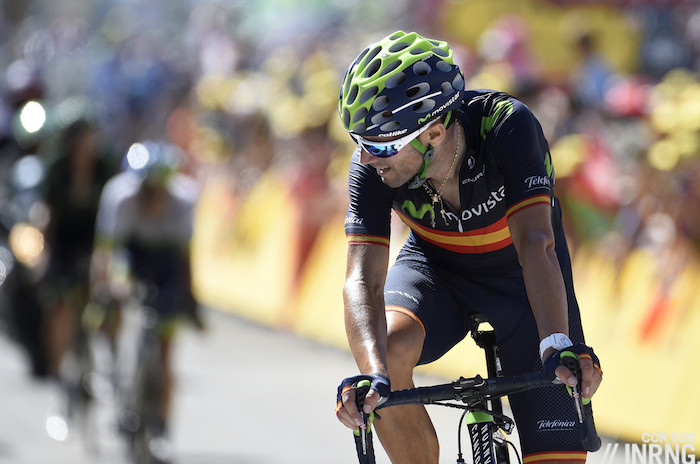 The Contenders: a break or the GC contenders fighting for the stage win? Any move will find Sky, Movistar, BMC Racing and Tinkoff-Saxo chasing but I’m not sure how committed they will be. You might long to see Movistar rip things up but these are long, wide straight roads and any moves on the climbs before the finish need to take a minute’s lead to hold off Sky’s chase through Mende and up the final climb.

Alejandro Valverde is the prime pick. He can cope with the climbs and still packs a sprint as we saw at the Plateau de Beille where took off to take one second on the others, pointless then, crucial today.

Geraint Thomas has a very fast finish but will he have to tow Chris Froome instead? Another transformed rider is Tony Gallopin, he’s always packed a sprint but you wonder whether he’s going to crack on the climbs. Perhaps the Alps will get the better of him but current showings this is fine.

Joaquim Rodriguez won here in 2010 but as good as he’s been going this year, he’s switched to breakaways rather than trying to hang with the GC riders. If it’s sprinting against the big riders it’ll be hard, he’s not as zippy and the flat run to the line is harder.

Dan Martin‘s said to be ill so what looked like a great chance for him may not work out but if he’s there this is a great finish. Alexis Vuillermoz was excellent on the Mur de Huy and at Mûr-de-Bretagne but will be heavily marked. Thomas Voeckler should give it a go but converting breakaways to wins is getting harder for him. There are mountain points for Rafał Majka. Which one of the Yates brothers? Simon is recovering from a cold and the team has targeted this stage for them.

Weather: hot and sunny again with a top temperature of 34˚C. The heat will see clouds build and there are thunderstorms forecast for later in the day and could coincide with the finish.