They’ve changed the rules but can they change the ruler? Peter Sagan won the points competition by such a large margin last year that he’s an obvious pick to win again.

Here’s a look at the contenders and pretenders for the points competition and a wider look at the sprinters and their teams too.

Points competition: riders win points by placing at the finish of a stage and the intermediate sprint during the stage. The best score wears the green jersey. The points competition is always an exercise in arithmetic, usually addition but occasionally subtraction if a rider breaks a rule.

In the past this had been a “regularity contest” but the Tour’s scale is weighted to the sprinters with more points on offer for a flat stage than a summit finish. The idea is to give sprinters a reward rather than rewarding the rider already in yellow or polka-dots.

New for 2015: Now the points are tilted even more towards the sprinters:

Call it the “anti-Sagan” system, a year ago he had a hundred point lead by Stage 7. There are six identifiable sprint stages so win three flat stages and a sprinter has 150 points while if Sagan wins three hillier finishes he gets 75 points and will have to make the top-5 in a field sprint and win the intermediate sprints just to get level.

Re-run the 2014 Tour with the 2015 points system and Sagan would still win. But that’s a static calculation, the dynamic effect of the changes for 2015 encourages a rider like Mark Cavendish or Alexander Kristoff to stay in the contest knowing if they go on a winning streak then we’ll have a good contest during the race. At the same time Peter Sagan’s niche is getting crowded, once upon a for a short uphill sprint the only question was what kind of victory salute Sagan would deploy. Now Michael Matthews, John Degenkolb, Nacer Bouhanni, Bryan Coquard are possible winners and maybe Edvald Boasson Hagen too. So let’s look at the sprinters… Alexander Kristoff has 18 wins so far this year across a range of terrain from the Tour of Flanders to recent sprints in the Tour de Suisse. Since he started racing in February he’s won something in every month and surely he’s going to win in July. Last year he won two stages of the Tour including the irregular finish in St. Etienne. A relative weak point is his team with Jacopo Guarnieri, Marco Haller and Luca Paolini. They’re good but as sprint trains go he’s missing a carriage or two. Mark Cavendish has 13 wins so far in 2015 and a total of 25 stage wins in the Tour de France over the years. He’s had some good wins like Kuurne-Brussels-Kuurne but a blank Tour de Suisse and has missed self-proclaimed targets like Milan-Sanremo. His ride in the British championships saw him ditch several Sky riders which bodes well for form, especially to harvest points on the hillier stages. His aero position, his expertise and a well-drilled lead out train with Matteo Trentin and Mark Renshaw mean he’s still the winning package. John Degenkolb also had a discreet Tour de Suisse. Along with Kristoff he’s the best rider of the 2015 spring classics with his wins Milan-Sanremo and Paris-Roubaix but in a straight line sprint does he have the speed to beat Kristoff and Cavendish? He’s yet to beat Cavendish in head to head sprint but comes with a team built to deliver. His versatility means he’s excellent on the uphill finishes but so are others. You could think he earn points by finishing in the top-3 several times but remember the points are skewed to the stage winners. The plan was for Peter Sagan to rack up wins in the spring classics so that come the Tour de France anything was a bonus for a Tinkoff-Saxo squad built around Alberto Contador. Alas many will remember Sagan’s spring campaign for the undignified image of him squatting a ditch in Paris-Roubaix. Since then things have improved with the overall win in the Tour of California and his annual festival in the Tour de Suisse. He knows his team is there for Contador but Daniele Bennati and Michael Valgren can probably work for him. Of all the bunch sprints the Tour’s wide finishes don’t suit him so well, he thrives on sharp handling and acrobatics but the Tour’s big boulevard finishes mean his bulk becomes an aerodynamic drag. In order to win green he’ll have to be active everyday but seems in good form and up for the challenge. Michael Matthews rides his first Tour de France. A year ago a training ride smash put out of action just before the Tour. Still 24 he’s already got a reputation as a prize hunter capable of winning quality races but the Tour is a new level to attain. He can win flat finishes but thrives on the uphill finishes, for example Saint-Pourçain in Paris-Nice. He comes a strong team to serve him on the right days. 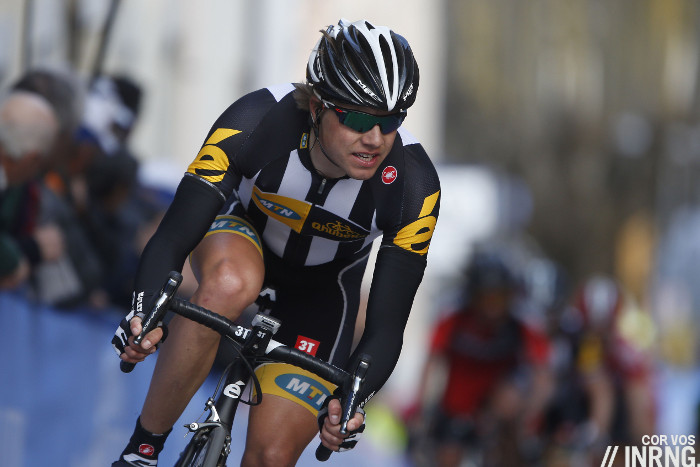 Bunch sprint wins, uphill finishes and even taking points on mountain stages? There was a time when Edvald Boasson Hagen could win anything, any time, anywhere. Now he’s riding as if he’s a waning 34 year old when he’s actually just turned 28. He’s put on weight for strength for the sprints and a stage win is possible but he’ll surely need some a lucky break here or there to beat the competition. As such a stage win is in range but on present form the green jersey looks elusive. André Greipel has ridden the Tour de France every year since 2011 and won a stage every time. Great consistency but a winning streak for the green jersey seems unlikely, he can beat the best on his day but not time after time. Lotto-Soudal are well drilled and he’ll be there for the stage wins and even if he’s 32 he’s just won the Ster ZLM Tour.

Arnaud Démare came close last year but 2015 hasn’t seen much progress. A tilt at the classics flopped although a spate of punctures just at the wrong moment was partially to blame. Still he’s got the raw speed and given a clear run to the line can be very hard to beat. Still 23 he’s got time to improve. Nacer Bouhanni won’t win the green jersey. The plan right now is to start the Tour de France in recovery mode for the opening stages as he gets over his crash in the French championships. He’s already training and Cofidis’ plan is to sit tight until Stage 5. But will Bouhanni stick to the script, it seems hard to imagine him sitting out the sprint finish on Stage 2? His team are getting better with Geoffrey Soupe his version of Mark Renshaw. The wildcard invitees would sign today for a stage win. Completing the trinity of Frenchmen is Bryan Coquard. “The Mosquito” weighs less than 60kg and can sting on the uphill finishes but he’s easily swatted away too. He’s yet to win a World Tour race and now he’s lining up in the biggest of them all. Last year he kept contesting the intermediate sprints because he thought second in the points competition to the Slovak was “a good reference” only to finish third when Kristoff took points on the Champs Elysées. Europcar have struggled with leadouts but Yoann Gène and Bryan Nauleau will help.

Bora-Argon 18’s Sam Bennett makes his Tour début. He has beaten the best before already but he and his team will find the Tour a huge challenge. His team and Irish supporters would love a win but a top-3 would be excellent going with a view to winning again next year. Only sprinters are the most  impatient of them all and if you can sniff a stage win you won’t wait.

That’s about it. The Tour sees many of the top sprinters in action and other teams are so focussed on GC that they won’t bring their “house sprinter” so Team Sky leave Elia Viviani behind, Astana bench Andrea Guardini and so on. Among the other names for the punchy uphill finishes there’s David Cimolai and Filippo Pozzato (Lampre-Merida), Simon Gerrans (Orica-Greenedge), Greg Van Avermaet (BMC Racing), Zdeněk Štybar (Etixx-Quickstep), Martin Elmiger (IAM Cycling), Tony Gallopin (Lotto-Soudal), Bob Jungels (Trek Factory Racing), Ramūnas Navardauskas (Cannondale-Garmin) and Julien Simon (Cofidis).

Conclusion
The rules have changed, first place on a flat “sprint” stage delivers a lot more points. If the competition rewards consistency, being consistently first in the sprint finishes is the best way to win. It should mean a more durable contest and force some to contest more intermediate sprints but all this is predicated on spreadsheet forecasts and reality will soon intervene. The course too is different with just six potential sprint finishes, fewer than ever.

Peter Sagan is the prime pick but he’ll have to push Mark Cavendish and Alexander Kristoff in the big bunch sprints and hope that the level among the sprints is close so that pure sprinters cancel each other out rather than seeing one on a winning streak to collect four or more stages.