With the Giro starting tomorrow a quick chance to check the lie of the land across all teams with the victory rankings. After the busy month of April we’re now one third of the way through the season as measured by race days.

It’s interesting that one big theme of April was how Etixx-Quick Step couldn’t win a race but here they are at the top of the table, boosted by Mark Cavendish’s Turkish triple last week. He is on nine wins, as is Team Sky’s Richie Porte while the top spot belongs to Alexander Kristoff with 11 wins. The top four teams have half the wins and there’s a reasonable correlation between budget and results. Not that all team budgets are known but with some estimation the correction is there. Tinkoff-Saxo have a large budget but it’s not at BMC, Sky or Etixx-Quick Step levels, but it is bringing few results. Still if Alberto Contador does the Giro-Tour double then the chart about becomes meaningless.

Lower down and Giant-Alpecin have quality over quantity. Sanremo and Roubaix are great results but normally the team would have won more with Marcel Kittel, Luza Mezgec for the sprints. Kittel is struggling with his return but he’s been on a level above others before and has time to start racking up the wins.

Cannondale-Garmin and Lotto-Jumbo well at the bottom, the US team is second last above but last on the UCI’s World Tour points ranking with the sum total across all riders of 26 points, just less than the individual haul of Davide Cimolai who sits 58th on the individual rankings.

As ever the repetitive mention that wins alone don’t count, teams long for high profile success rather than picking off wins in a 2.1 stage race, like Cannondale-Garmin did on a morning split stage in the Criterium International, great to win a race but few saw it happen. The point is that morale takes a hit, teams unable to win even the smaller races risk a psychosis and the vicious circle of few wins meaning more pressure, more nerves and so less success.

Now for the Pro Conti rankings where the combined total for the top three teams is less than that of the first team in the World Tour, illustrative of the slimmer pickings. Rusvelo lead but can you name a win? It goes to the point made about Ilnur Zakarin the other day, that Russian riders are foreign commodities who seem to operate in a silo that few look into. All the team’s win come in domestic races like the GP Adygeya and GP Sochi. 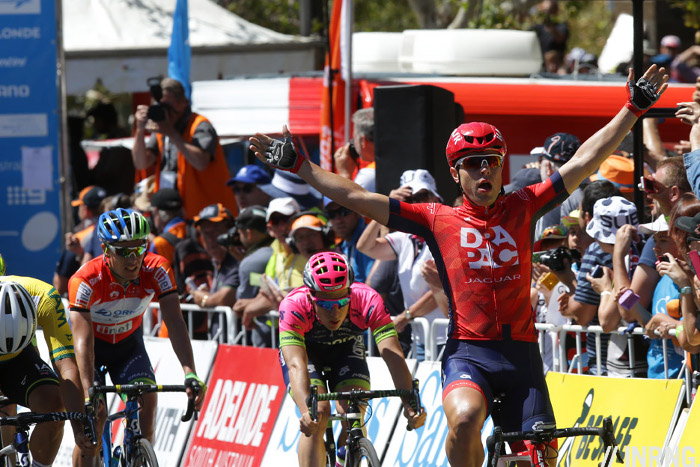 CCC-Sprandi and Drapac both share Pro Conti status but a World Tour win thanks to Maciej Paterski in Catalonia and Wouter Wippert in the Tour Down Under.

Thomas Voeckler explained to L’Equipe the other day just how tough things are for the Europcar team, there’s no new sponsor and the team’s finances are so tight they can’t afford many training camps, use budget hotels all the time and often won’t send a full fleet of vehicles to a race in order to save on fuel and tolls. A team sponsored by a vehicle rental firm can’t afford to run vehicles.

Cofidis meanwhile have a bigger World Tour budget but still have few results to show. Nacer Bouhanni spent the spring chasing big results but had to refocus on smaller goals to finally land three wins in domestic French races. Swedish sprinter Jonas Ahlstrand has just won the biggest race of the year, a stage in the Four Days of Dunkirk. Ahlstrand was hired as a lead out for Bouhanni but the teamwork hasn’t clicked and management have gone public with criticism of the Swede.

Onto the Giro where wildcard invitees will win stages to prove the Pro Conti teams can mix with the World Tour and where Oleg Tinkov will be hoping for that fourth win soon.