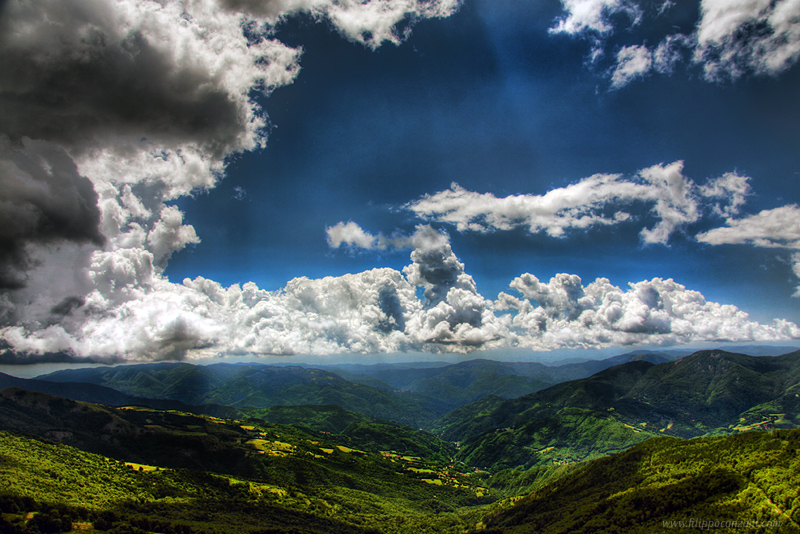 The first summit finish of the 2015 Giro d’Italia, the road up Monte Gomito to Abetone is something to look forward to but also a worry. It’s harder than the profile suggests and coming at the end of Stage 5 it could reveal who will win the race outright. Fanciful? Not really, it’s happened before.

But enough fretting about the future, it’s been a classic climb and the launchpad for Fausto Coppi’s first Giro win. But most of time the Passo dell’Abetone is a regular destination for thousands of cyclists in central Italy keen to test their form on a long climb. 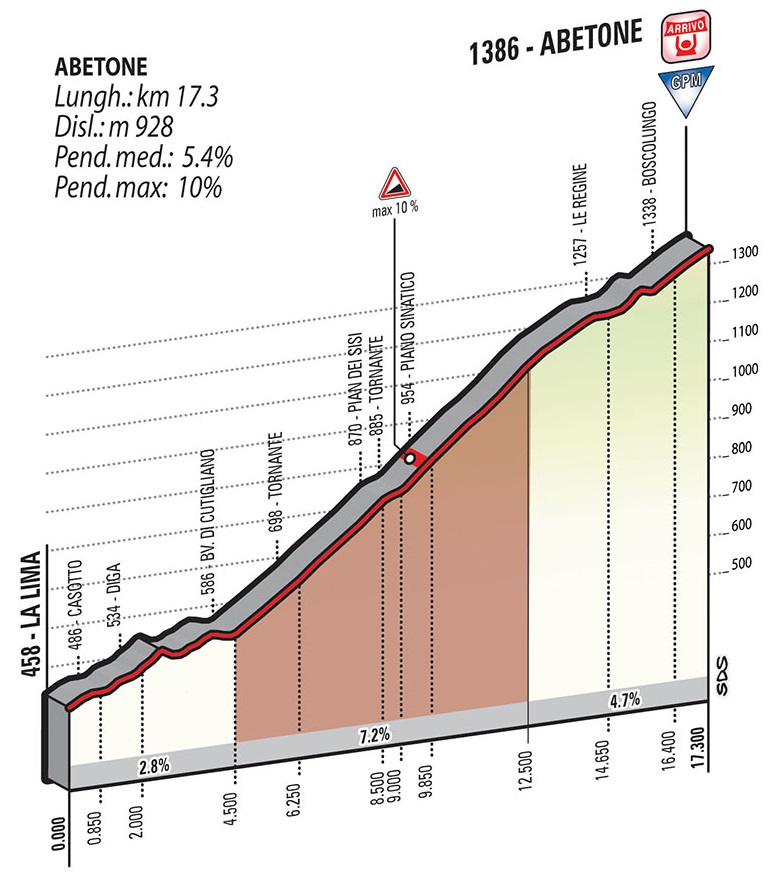 The Route: there are several ways to the top. This is about the southern flank on the Tuscan side, picked for three reasons:

From La Lima the SS12 heads north to Abetone. It is 17km and averages 5.4%, climbing to 1388m above sea level. The Giro profile above says 1386m but presumably they finish just before the top.

The Feel: the wide road is easy to find, there are not many choices in the narrow valley, plus it’s well-signed posted. You immediately sense it’s a major road given the signs to Modena, a large city far away. Factories making cardboard line the road, once they were mills powered by the Lima river, now by electricity and the Lima river seems all the better for it with clear water.

It’s a gentle climb to start with and not once that requires you drop the chain on the inner ring from the start. If anything it’s flatter than the profile above suggests. A few sharp sections can be scaled out of the saddle and there are descents to recover speed even if you’re still gaining altitude above the Lim valley.

It’s not until 4km that the road pitches up, it’s here that things get hard. The hairpins after Cutigliano see the gradient reaching 7% and sometimes 8-9% and the slope is going to stay this way for most of the way up. These are Alpine gradients and it’s selective for a race. For the lone rider it’s easy as the wide road is well-engineered.

The road might be famous for Coppi and Merckx but on an ordinary day it’s got potholes and traffic. The surface is fine, cracked in places in the summer of 2014 and perhaps it’ll be remade ahead of the Giro’s arrival in May? The road is wide for a reason, to allow traffic to speed up and down with ease. There are not too many reasons to drive over the pass but those that do are in a hurry and the wide road allows them to go fast, not ideal of the cyclist. With the traffic in mind the road is lined by large barriers, adding to the feel of a race track, especially given the volume of motorbikes, SS12 road is a long and scenic way from Abetone to Austria.

The SS12 goes from Abetone to Austria

Don’t be nervous, the road is lined with cyclists on a Sunday morning in summer keen to test themselves on something longer than Monte Serra. The worst traffic is the slow kind, the blue buses which toil up the slopes. Their sooty fumes are bad but worse is the hairdryer-hot zephyr that engulfs you.

Sometimes RCS can exaggerate with their profiles, the steepest part of a climb in their profiles can require a theodolite to locate but this time there seemed to be several passages at 10% rather than one. Any changes of gradient can be spotted from a long way off and you’re only need to click up or down one gear at a time.

The higher you go the more road enters an oak forest, the views of the valley below and the peaks above appear from time to time. The rewards will come later when you arrive at the top in Abetone, a small town that’s sprung up because of the road and the nearby ski slopes. It probably looks better with snow, in the summer the buildings look tired.

The Verdict: a fast climb at the start, especially if tackled in a bunch. It’s long and the 5% average is flattered by a soft section to start with, after Cutigliano it’s 7-8% a lot of the way. It’s wide which means the traffic can pass with ease but it’s wide which means there’s a lot of traffic. Try in the summer on a Sunday morning and you’ll meet the locals.

History: first used in 1928 it’s become more famous because of the 1940 stage from Florence to Modena when Fausto Coppi took off on the climb and went on to win in Modena, his first Giro stage win and he took over the race lead which he kept to the end. So the Coppi legend was born. There’s a small Coppi memorial on the way up, a square stone embedded in a wall.

The 1959 Giro saw Abetone as summit finish on just the third stage. Charly Gaul won the stage and took the maglia rosa. Jacques Anquetil would lead the race later on but Gaul took back the lead and won.

Merckx won in 1969, using the climb in the reverse direction and looked set to win the race but then came Savona. The town is synonymous with his positive doping test and a tearful Merckx was ejected from the race. Conspiracy theories flourished from lurking fans to angry team mates but Occam’s Razor’s suggests he was just unlucky to get caught. 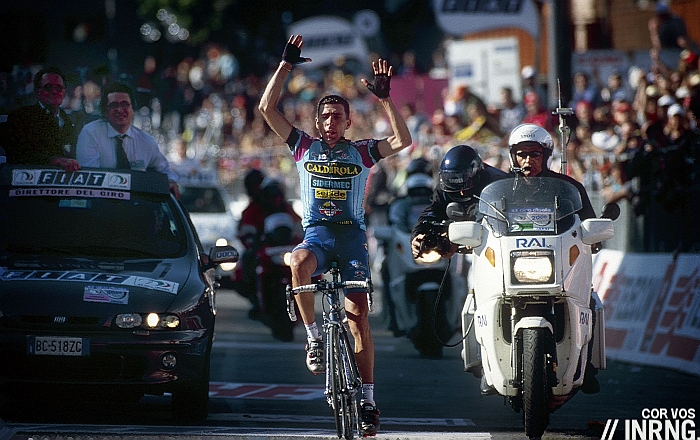 We can also look to 2000 when Francesco Casagrande won with a powerful solo attack to take the race lead not far from his home. Casagrande dominated the race until the final mountain stage when he cracked and was overhauled by Stefano Garzelli, a cruel defeat but if the Tuscan was a prolific winner he never managed to win big, collecting a series of week-long stage races and winning Flèche Wallonne rather than Liège. Aged 44 he’s still busy riding on these roads. 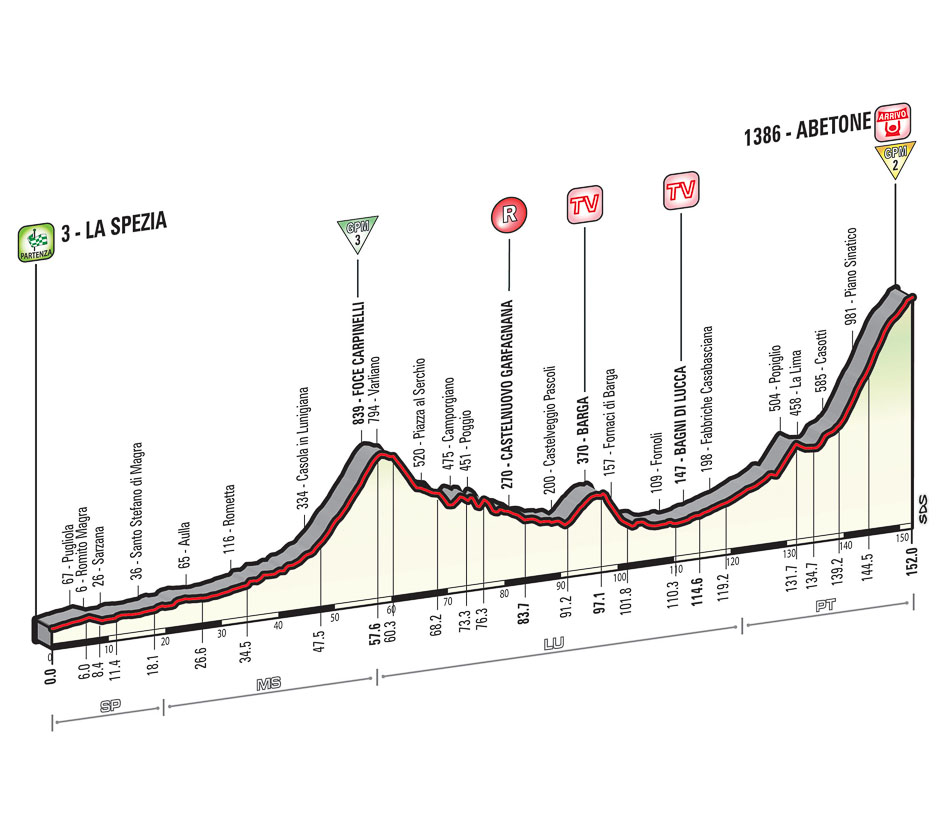 Future: Such a big climb so early risks imposing a hierarchy early on in the race and the suspense for the following two and half weeks is diminished. It took a positive test to eject Merckx, a bad day for Casagrande and we can’t wish these events on anyone but if Alberto Contador is already the obvious pick for the 2015 Giro, here’s hoping he’s not in the lead after Abetone already.

For the Giro we can expect plenty to be dropped and it’s the kind of climb where a strong team can do a lot of damage. It’s the kind of climb where the selection happens out of the back of the group rather than attacks of the front. But perhaps those with ambitions for the overall victory will avoid trying too hard. A calm climb would mean they’re not forced to lead the race early. You might think getting the pink jersey is a big deal and you’d be right however those with serious ambitions about winning the race overall maybe prefer to let someone else defend the jersey and perform daily media duties which can add to their fatigue.

Travel and Access: the climb marks the border with Emilia-Romagna and Toscana, two Italian regions. Toscana, or Tuscany in English, is one of the heartlands of European cycling with many a famous pro and thousands upon thousands of weekend warriors.

It is also one of Europe’s tourist hotspots but few visitors to Florence and Pisa venture too far. All the better for you as it means easy access but no crowds. Pisa airport is near, Florence is well served by rail plus the autostrada network. Pistoia can make a good base with excellent roads and some stunning renaissance architecture that’s free from the crowds. Several pros live in the area, one of the locals is Mark Cavendish.